New Apple 3D App in the Final Stages of Development – See a Screenshot of it on an iPad! 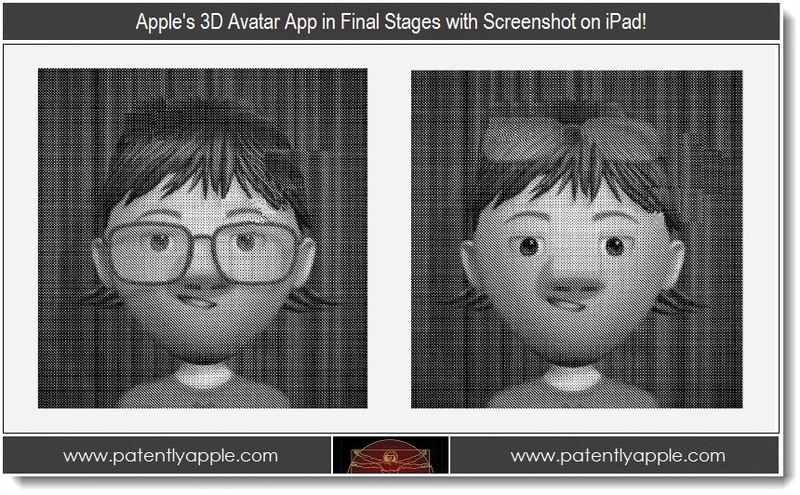 Earlier today we introduced Apple's 3D Avatar App which covered a basic overview of the new application in the works. Now a second patent application has surfaced and it actually shows that the app is already running on an iPad! We have the screenshot to prove it. The new patent application focuses on how the app will work with color palettes and more. The big news however is that the new 3D Avatar App is in its final stages of development and that's very cool. Evidently phase-one of the application is geared for the younger crowd, but other editions could be in the works as discussed in our first report today. One of the 3D characters in this Avatar App that we illustrate in our report has an Apple T-Shirt on. It makes you wonder if Apple is planning to debut this 3D Avatar app alongside a cool new Apple based game of sorts to kick this off just right. At the end of the day, Apple is in the final stages of a great new app for the iPad.

Some electronic devices can display three-dimensional models that a user can control as part of an electronic device operation. For example, gaming consoles can display avatars that represent a user, and the user can direct the avatar to perform specific actions in the game. The avatars can be constructed from the combination of assets such as a body, a head, eyes, ears, nose, and hair. To enhance the user's gaming experience, a user can personalize the avatar by selecting specific assets. The user can further personalize the avatar by changing colors of specific assets. The displayed avatar, however, is typically colored using a color palette by which a color of the palette is associated with each pixel of the avatar. Because palettes typically are limited in size (e.g., 256 colors), the palettes may not allow for progressive transparency or gradients in color. In addition, there is no easy approach for uniformly changing a range of colors to a new range of colors.

An electronic device can display a three-dimensional model, such as an avatar. The avatar can be constructed from several assets, each of which can have several colors. In particular, an asset can include variations of colors (e.g., gradients, or blended colors) that provide an aesthetically pleasing avatar. To personalize an avatar, a user can select and change some of the displayed colors of individual assets. For example, a user may wish to change a first or indexed color of an asset to a second or destination color.

To efficiently change these identified colors when a user wishes to change an indexed color of an asset, the encoding of each asset pixel having one of the identified colors can be modified. In particular, the encoding of each pixel can include a color index that may indicate whether the color of the pixel can be changed for a particular indexed color. The color index of a pixel can be encoded in any suitable color model including, for example, a red, green, blue (RGB) model or a hue, saturation, value (HSV) model.

New App Shown on an iPad 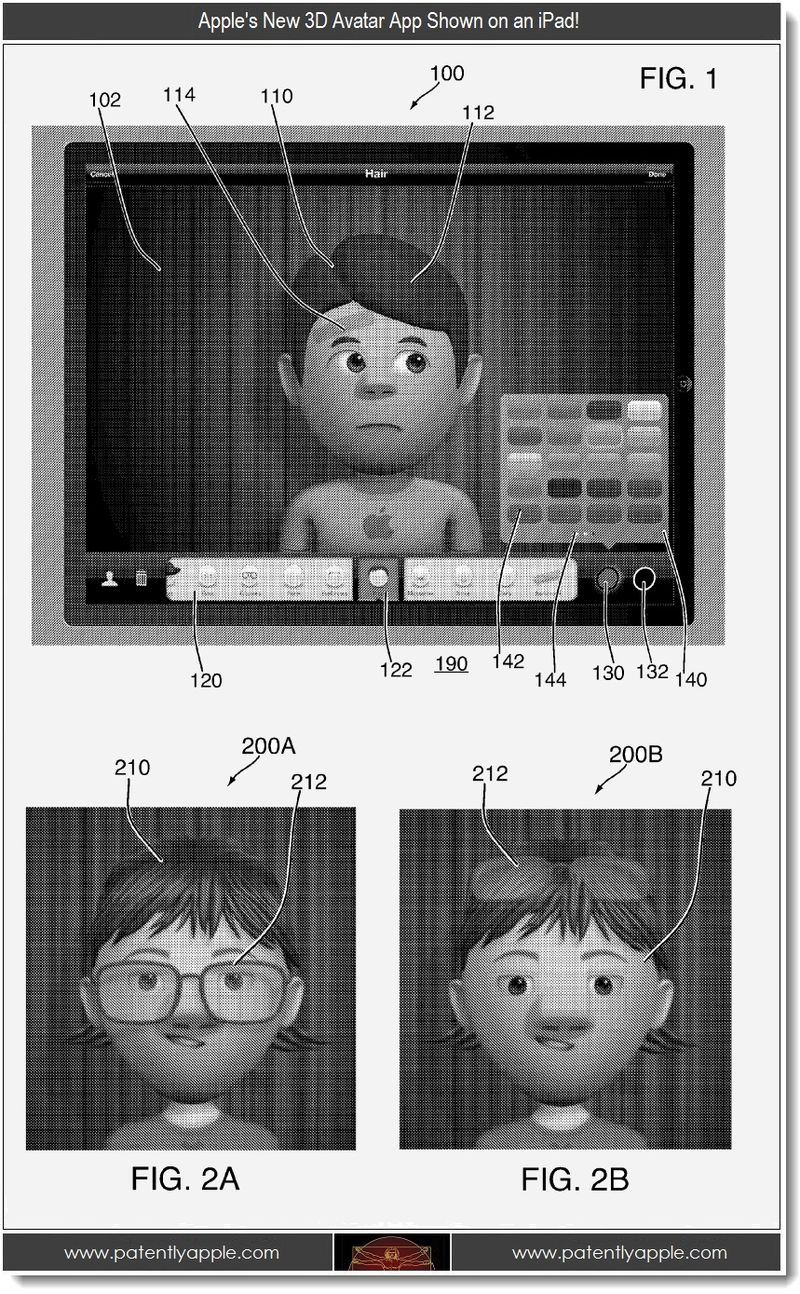 Apple's patent FIGS 3 & 4 shown below are illustrative views of eye assets; Patent FIG. 5 is a schematic view of a palette-based approach for coloring an asset. 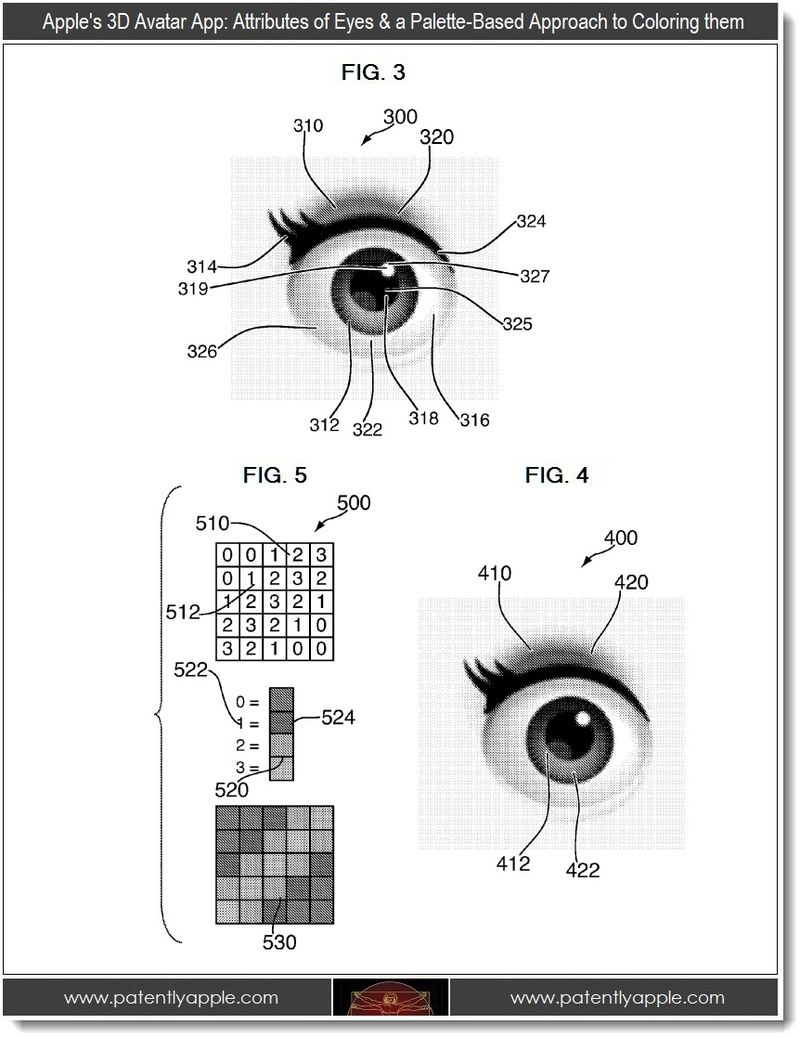 Apple's patent FIGS. 6 & & shown below are illustrative displays of the new iPad's 3D app interface for defining colors of an asset that can change. 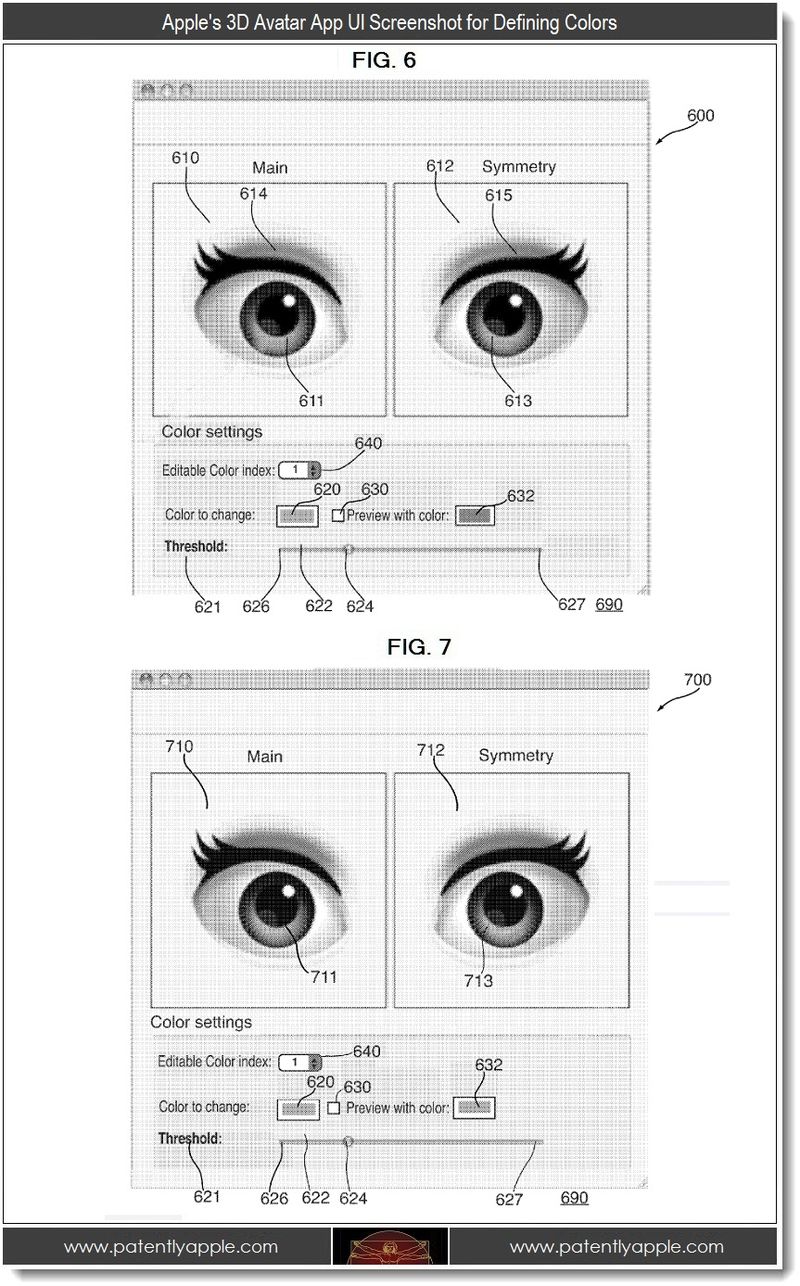