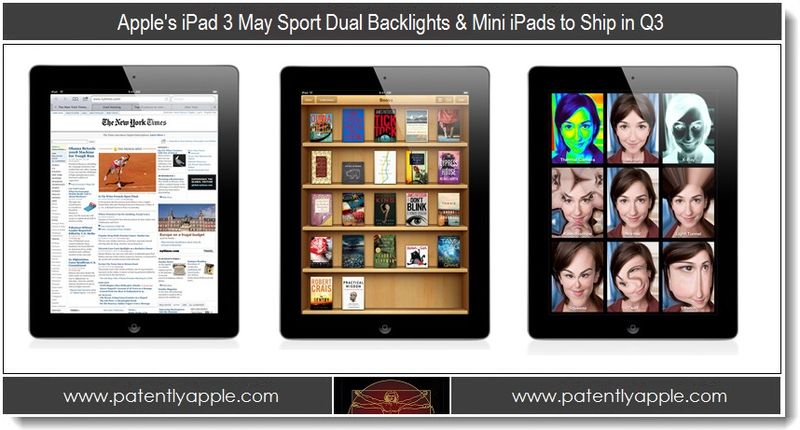 There are two new reports out this morning from DigiTimes worth noting. The first report states that Apple is expected to launch 16GB and 32GB iPad 3 models during their March seventh event.

In addition to the iPad 3, Apple is also expected to unveil an 8GB iPad 2, allowing the tablet PC series to cover different segments and to defend against Windows 8-based tablet PCs, the sources noted.

According to DigiTimes, The iPad 3 is expected to have a 9.7-inch Full HD QXGA panel with a resolution of 2048 by 1536 (264dpi) and its backlight module will adopt two LED light bars. If the latter pans out it would confirm Apple's patent application that we covered in November 2011.

DigiTimes also reports that Apple will crank up volume for their all new 7.85-inch iPad model sometime in Q3 2012. The model is to target Amazon's Kindle Fire with a price target in the $249-299 price range.

The smaller iPad sounds stupid. It makes much more sense to make a larger iPod Touch. Speculation is that the iPhone will grow to 4+ Inch screen. An iPod Touch with a 4.8-5.25 inch Screen could put the fear of god into the Kindle Fire and could be priced at or below the Fire's price point. The two options allow for ether the 4.85 inch 1024x768 (current iPad resolution) or they could up the resolution to 1.5 times the current iPod at 5.25 inches and keep the 329dpi display resolution.

Both of these would fit in a pocket but could still be used for browsing, gaming, and even book reading. The price point could stay near the $200 point and range upto $350, leaving room for the step up to the iPad 3 at $500.

Compare this to an 8 inch tablet at the $350-$400 price point. Still not pocketable and not competitive with the Fire. Who buys this device?

A smaller iPad could go into cars to manage nav, Internet radio, Pandora and other entertainment options. If they put the current dock connector on the long side, the new iPad mini would fit current docks. For auto use, however, the dock is likely to have different identifiers for dashboard vs rear-seat docks so it can enable/disable functions. The dash docked iPad won't play video or games while the vehicle is moving. If there are multiple iPad minis in the car the dash iPad can find and control the others.

The magnetic ID for docking patent would come in handy for this. It could also be used to "key" the iPad minis to specific docks, making them useless if stolen because they refuse to charge in an unfamiliar dock. Apple has a patent for dock-based security as well.

If Apple starts ramping iPad mini production in Q3, then they probably have an automaker partner or three lined up to offer the docks integrated with the cars.