Apple Teases us with a Peek at an Advanced TV Remote 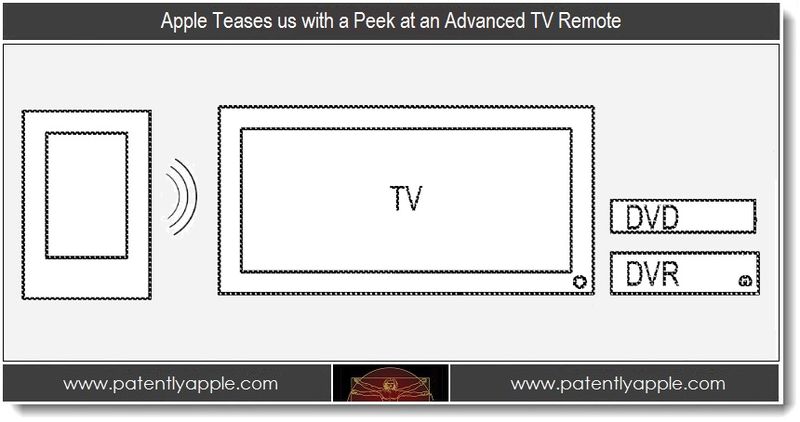 As rumors swirl and dance about in the blogosphere about Apple's coming HDTV, an Apple patent application pops up just in time to tease us about some of the possible new features that their TV remote may offer. While some of the features may apply to Apple's own HDTV, Apple's planned invasion of this market means attacking the entire market which includes TV's already in the marketplace today. One of Apple's wild new universal remote features works like this: you take a photo of your current TV remote and it sends it to iCloud for analysis. It then sends a "virtual copy" of your remote, functionality and all, to your iPhone. You're now able to control your current TV with Apple's advanced universal remote and enjoy all of Apple's TV remote features and likely tie-in products and services. Is that wild enough for you?

In order to achieve universal functionality, typically, universal remotes are programmed by a user. The programming may include looking up information either in a manual or online to find codes for infrared signals that will work for controlling the particular brand, model and/or type of electronic device being used by the user. Often multiple codes are given for a particular device and, as such, an iterative process of trial and error is used to find a correct code for a particular device with the user repeatedly looking up a code, entering the code into the remote and trying to control a device after the code has been entered. Thus, the process may be time-intensive and/or frustrating to a user.

In some embodiments, the remote control may include a camera that is configured to capture an image of controlled devices. The image is then processed to find a state of the device. For example, in some embodiments, the image may be processed to determine shapes and/or characters on a television screen. The shapes and characters may be used to determine that the television is displaying content from a particular source. If you think of it, that translates in-part to reading logos on screen from sources such as ABC, NBC or HBO for instance. Other shapes may relate to Apple-specific functions that that patent doesn't reveal at this time.

It appears that Apple is about to advance their Apple Remote application. In fact, it's likely to be integrated into a future iPhone (or other iOS device) instead of it being an add-on app at the App Store. The advanced features being added to Apple remote could be signaling their preparation for a standalone HDTV as it's to control a television and other related entertainment devices. But it could mean more than that as you'll see. 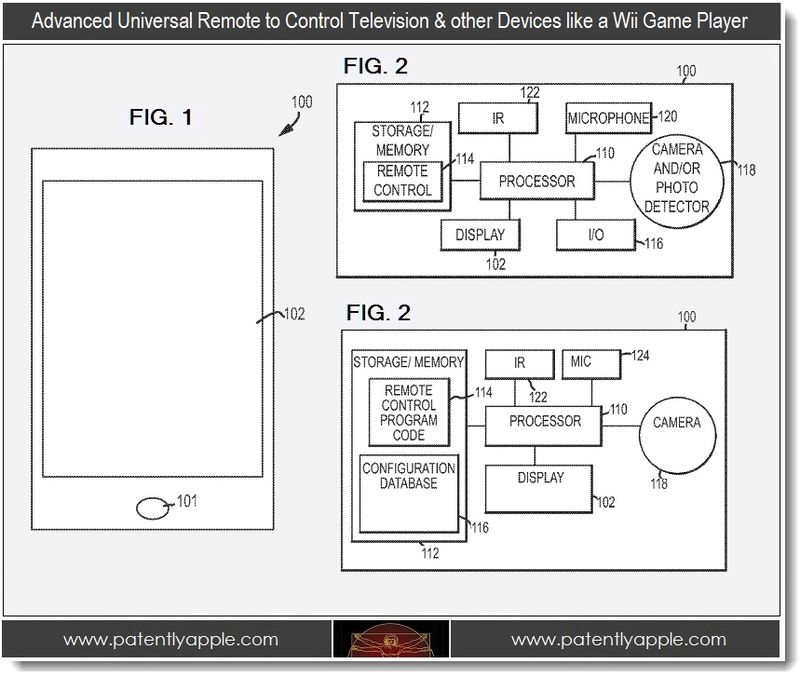 Apple states that patent FIG. 1 could be an iPhone configured with IR transmission capabilities. Patent FIG. 2 is a block diagram illustrating the iPhone's components that are to include a remote control program and camera that is in tune with the a self-configuring feature highlighted below. In Apple's second patent on the remote, a secondary patent figure 2 notes that in some embodiments, the memory may include a database 116 that may store information related to various electronic devices that may be controlled and/or their dedicated remote controllers. 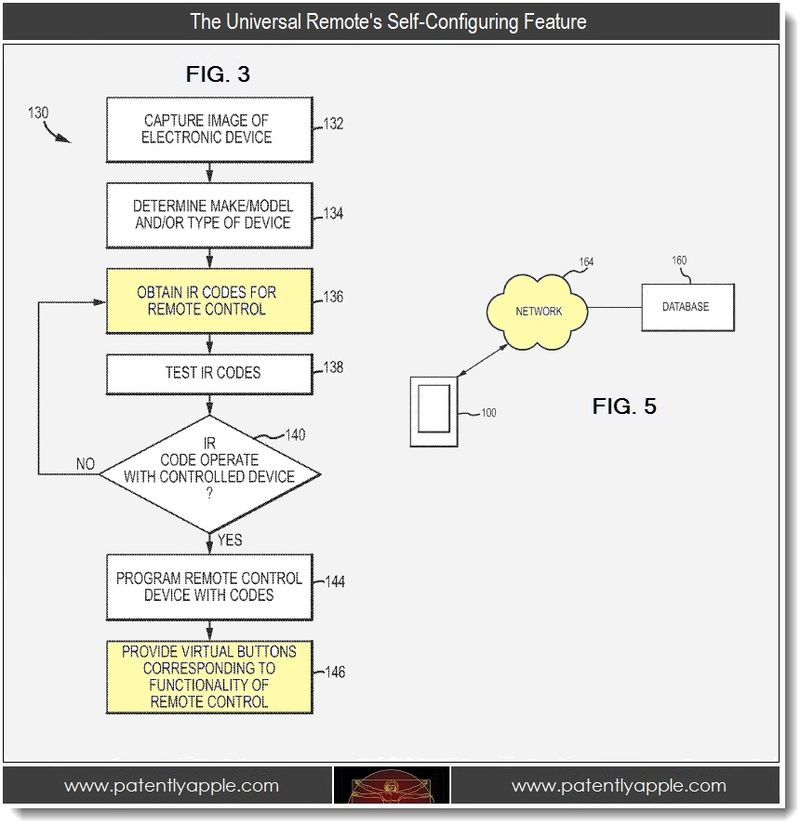 When the identity of the controlled device is known or at least some information about the device is known, IR codes for controlling the device may be retrieved from the configurations database 116 from a remotely located database (Block 136) which is illustrated in patent FIG. 5 as being a cloud network, meaning iCloud.

In some embodiments, the buttons may be virtual buttons or physical buttons that are programmed to provide a corresponding command to control the controlled device. In some embodiments, the configuration shape, and appearance of virtual buttons may imitate the configuration, shape and appearance of a dedicated remote control for the controlled device. 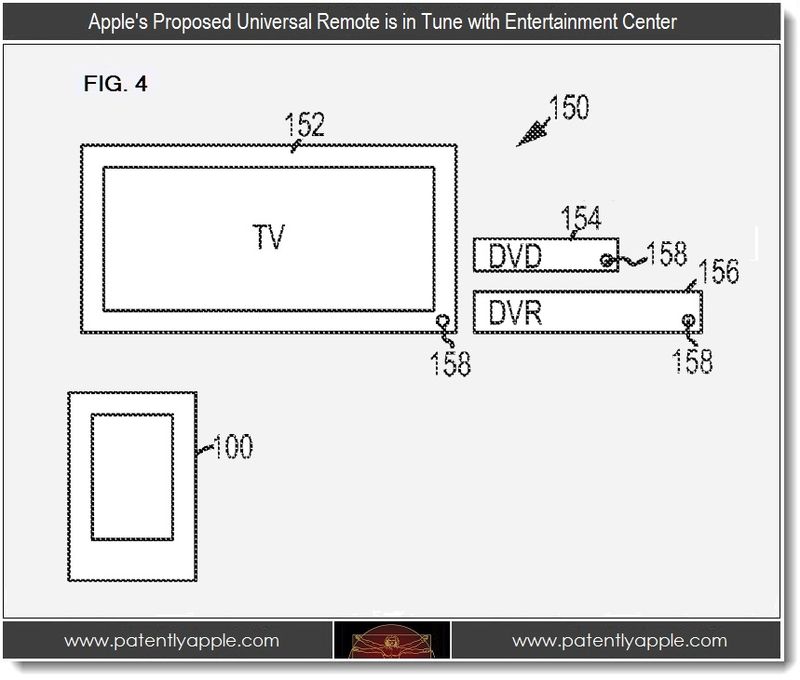 In Apple's other patent, they provide more detail. Apple states that the identity of the controlled device may be achieved through processing of an image to recognize logos, characters, shapes, sizes and/or other characteristics. For example, a television having a particular aspect ratio may be recognized based on it proportions and/or its size relative to other objects. A brand name or logo may be recognized for a particular DVD player, or DVR (e.g., TiVo). Moreover, a shape and/or particular arrangement of a face of a device may be recognized (e.g., a Nintendo Wii video game console). An example of this is noted in patent FIGS. 7 and 8. 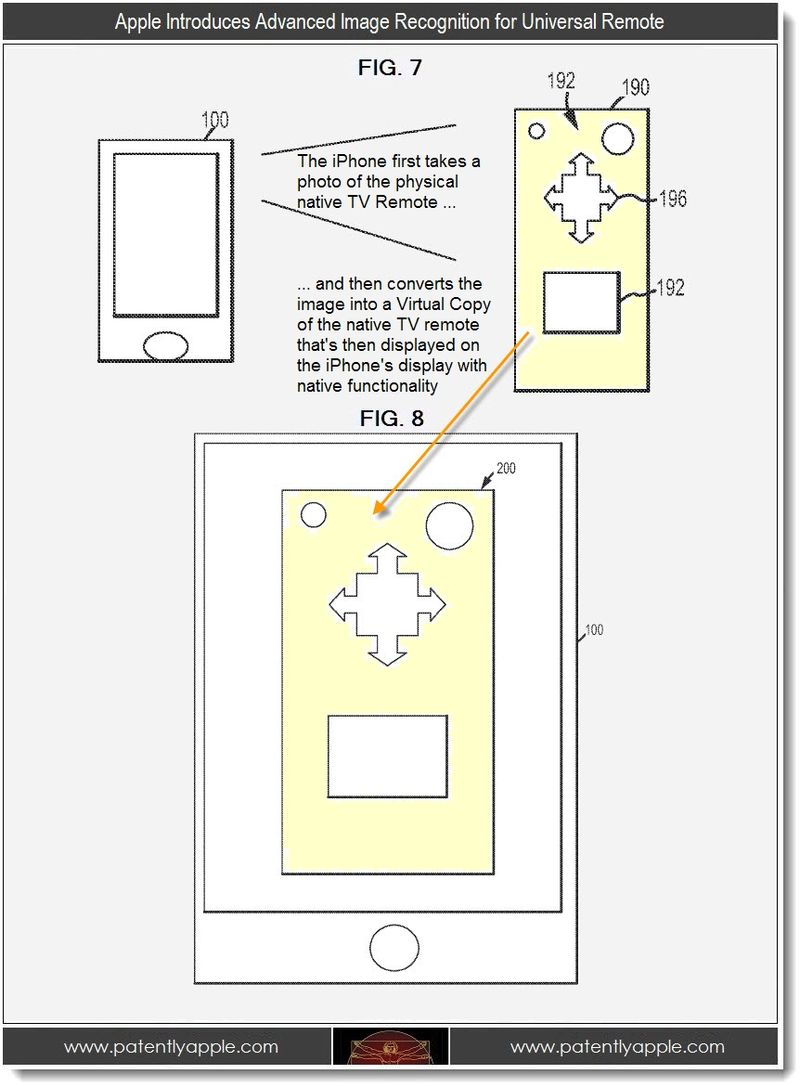 Apple's patent application was originally filed in Q3 2010 and published by the USPTO today. The inventors are noted as being Fletcher Rothkopf and Stephen Lynch.

Closing note: It's interesting that Apple mentioned that advanced universal remote controls may be capable of controlling dozens of devices, including audio and video equipment and home automations systems (e.g., lighting, door locks, and the like) and yet never detailed such interaction. Apple gets around that by stating that "the specific embodiments described herein should be understood as examples and not limiting the scope of the disclosure." So the admission in their patent background that the advanced universal remote will also be able to control lighting and door locks can't be forgotten, especially in light of Apple having other patents covering such applications – specifically controlling door locks.

I have the similar pending patent :-(.
I see the wordings and screen shot similar to my patent .
www.1-control.com.

I'm pretty sure it won't have this name if its released in England.