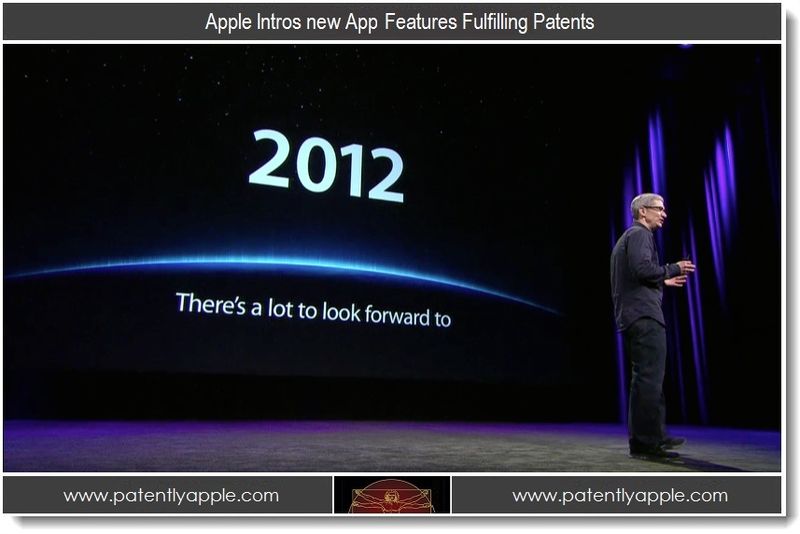 In late February, Tim Cook told Apple shareholders during their annual meeting that Apple was working as hard as ever to deliver some incredible products that would blow their minds. That's also a quiet message that Tim Cook carefully crafted for his final keynote slide that stated "There's a lot to look forward to" in 2012. Although we know 2012 will be a huge year for Apple, yesterday's special event was really more of a defensive move. One designed to get the leap over their competitors who'll be rolling out new products throughout Q2. Yes, there were some excellent evolutionary refinements to the iPad like the insanely new Retina Display, but not quite enough to be called revolutionary. In my view, Apple's strategy was more about pounding their competitors into the ground with mind boggling software application refinements that would leave them in the dust. And in today's report, we'll show you some of the patents behind the great new software features that Apple gave life to yesterday. 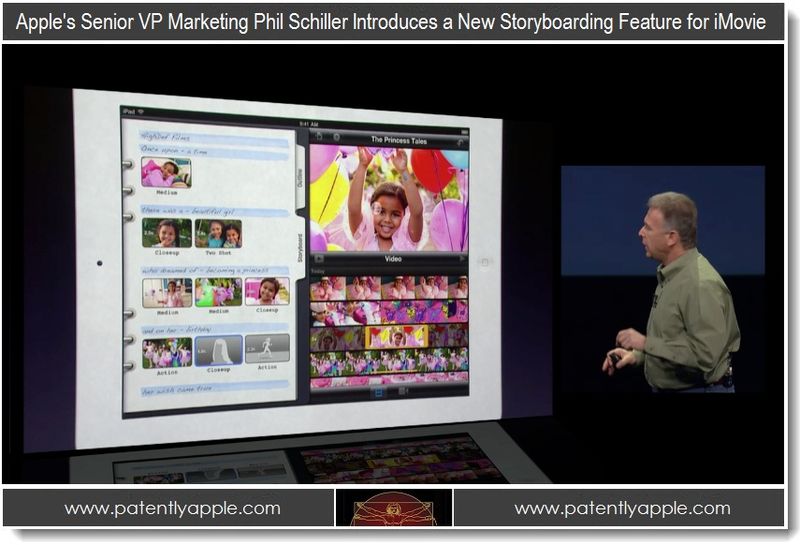 During Phil Schiller's iMovie presentation yesterday, he touched on the new Storyboard feature that fulfills a patent we covered on February sixteenth as follows:

"There's never been video editing like this. You fill out your outline, for example, what your movie studio name is going to be and who the director is and then you tap on the Storyboard and you have a visual storyboard of the piece you're creating; where it tells you exactly what shots you need, like a close up, an action shot or a group shot. But for the first time ever, you have a device where you can outline and storyboard your video, use a 1080p camera to record the video and then play it back on that high definition display. It's truly a transformative way to do video editing." The high definition display Phil was referring to is of course the new Retina Display as shown below. That shot was taken from one of Apple's new promo videos. 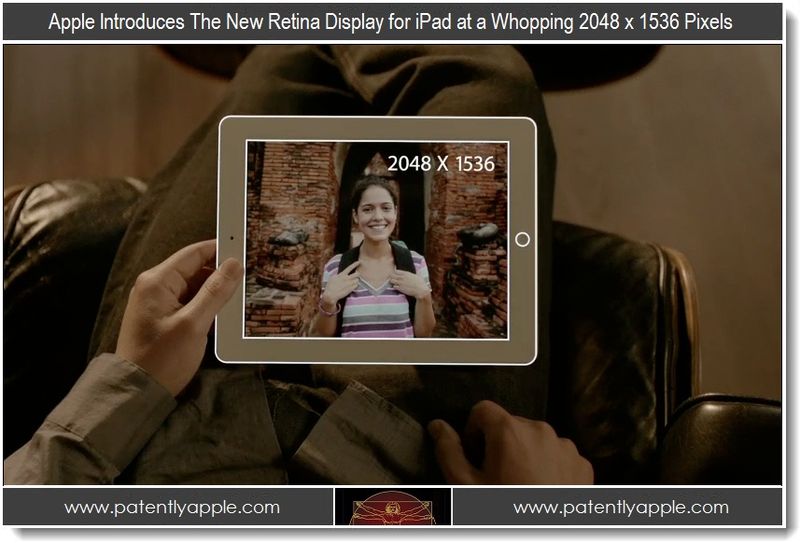 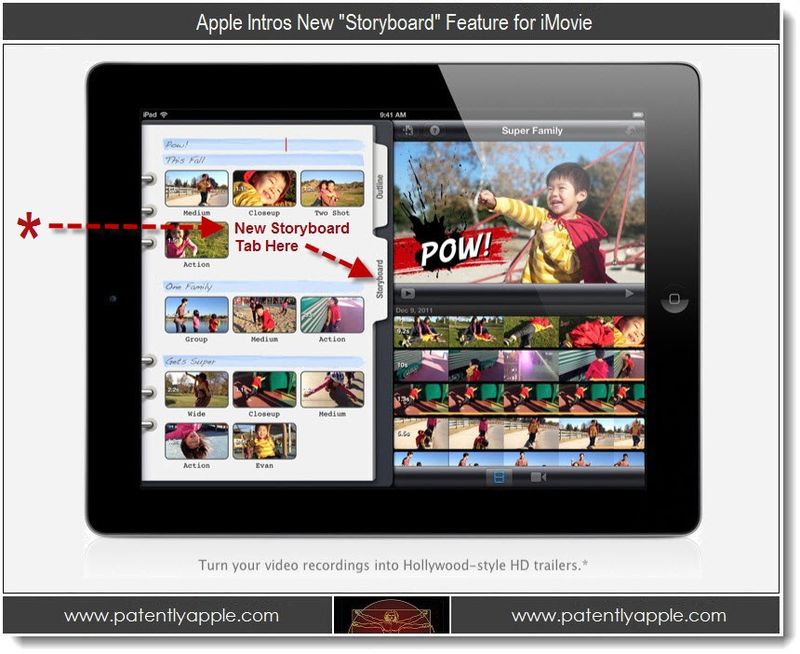 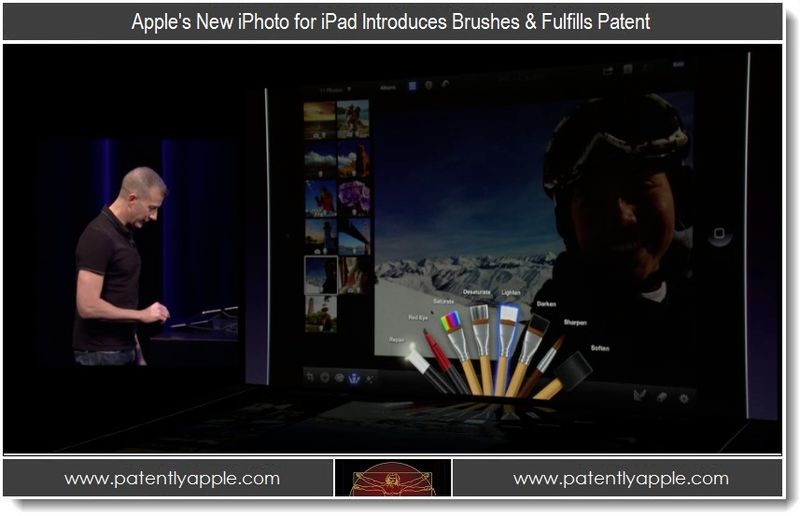 During yesterday's presentation, Apple introduced "Brushes" for the new iPhoto app for iPad as we illustrate above. This fulfills a patent that we covered in February 2011. Our coverage of that aspect of the patent stated the following:

"For iOS Devices: Using a touch screen device, a single paint stroke is created when the user touches the touch screen device (a finger down event), moves the finger across the screen (a finger drag event), and removes the finger from the screen (a finger up event). Although there are some paint programs available for the iPad, they're not from Apple. This patent would suggest that Apple could be considering their own Paint styled app." 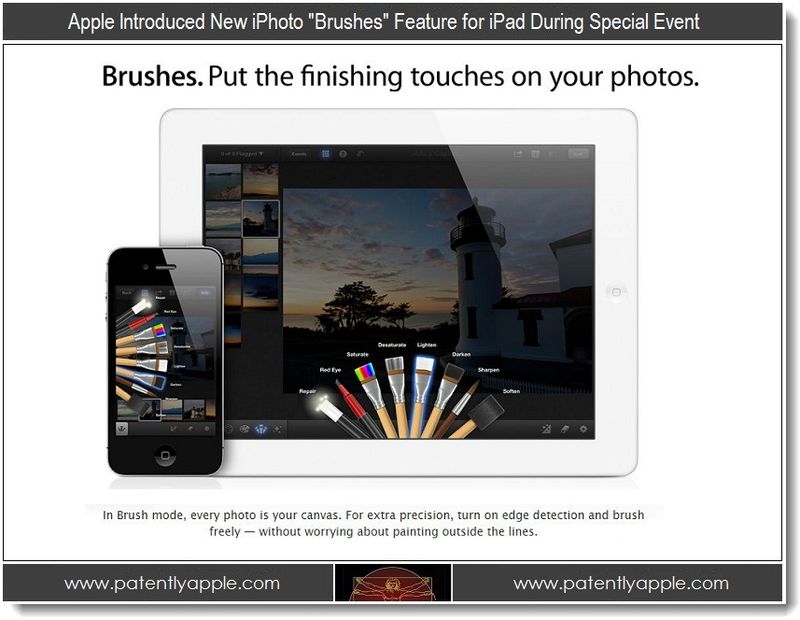 As you could see in our third graphic below, Phil covered advanced video stabilization due to the new A5X processor. We covered this technology in a past patent that was featured during Apple's October 2011 Special Event. It's still the same patent but with more power behind it now. Other camera features that were presented during Apple's Special Event included Auto Focus, White Space Balancing and Skin Tone feature. In our 2010 patent report titled "A Snapshot of Apple's Latest iPhone Camera Patents" we covered skin tone and color boosting which were highlighted in yesterday's presentation. In our 2010 patent report titled "Apple May Add Speed Enhanced Autofocus to Future Cameras," we covered Apple's coming autofocus feature. 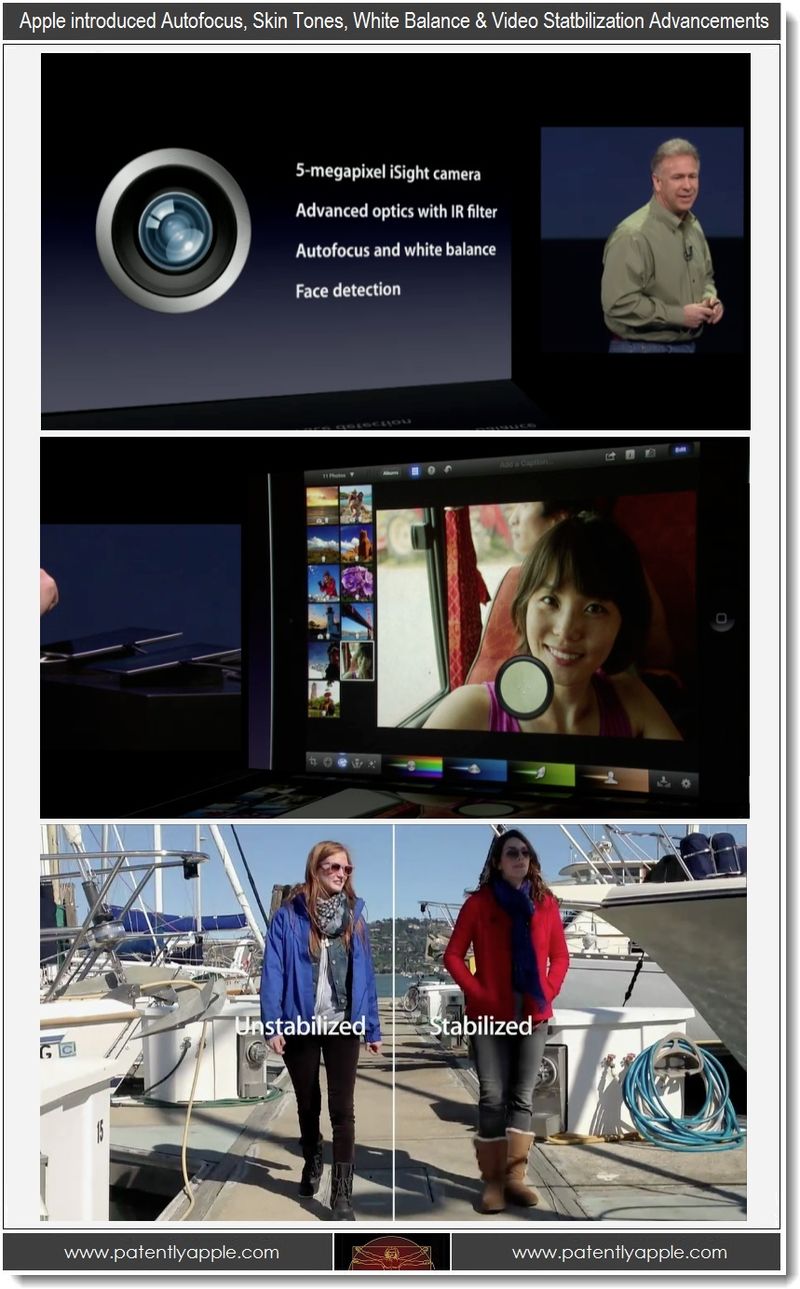 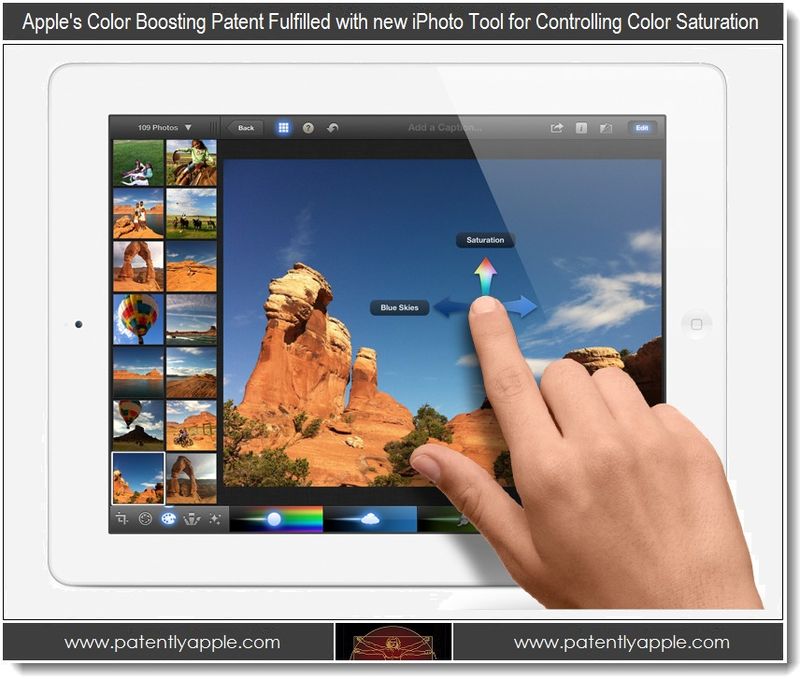 And finally, Apple's new iPad now Gains 4G LTE. While there's no specific patent covering its implementation, the fact is that patents throughout 2011 foretold of its inevitable use in future iOS devices. The demonstration of comparing download speeds between 3G and 4G were quite impressive. On a Humorous note, Apple's Phil Schiller really downplayed 4G last October. Yet magically four months later, he couldn't stop praising 4G on the new iPad. We forgive you Phil; we know that it's just the nature of your job. And by the way Phil, you put on a great presentation yesterday: Cheers! 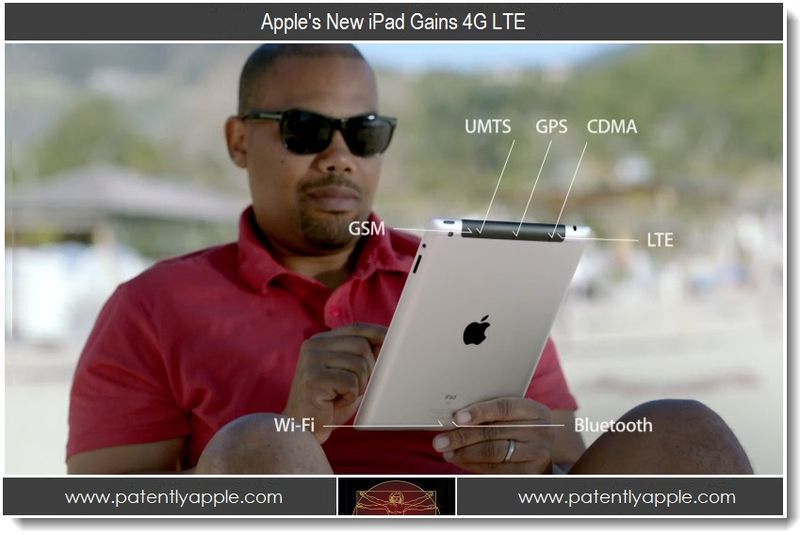 In closing I wanted to mention that in a report that was posted in early February, I stated that "2012 could be an Explosive Year for Apple." That was two weeks prior to Tim Cook pointed out that mind blowing products were on the way. I'm almost convinced that Steve Jobs wanted Apple to hold back on some of their products last year so that 2012 would be a defining year without him. A way to show that his legacy would continue and that the team he chose to carry on would shine. Let it be so. 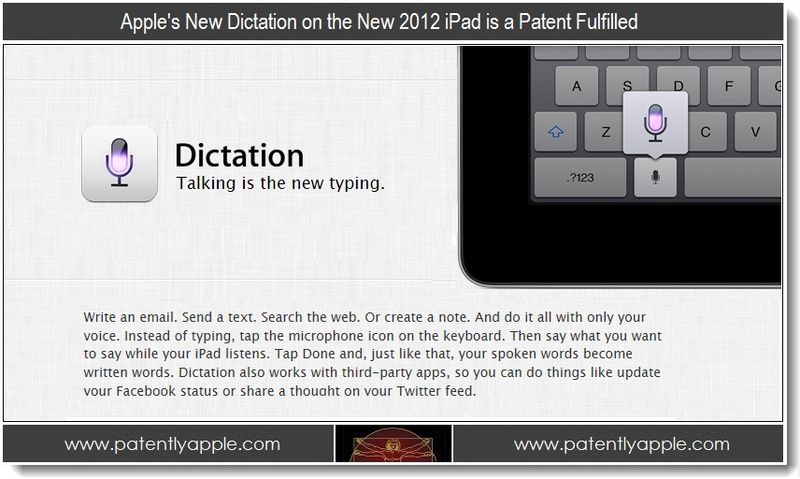 The new iPad with "Dictiation" is part of another patent fulfilled. Although the graphics are for the iPhone, all iOS patents state that the invention applies to other Apple related hardware. The patent provides an example of how it works similar to Apple's marketing for this feature.

Aesthetically, I'm not a fan of the fanned brushes selection list. Clutters the UI and looks out of place.