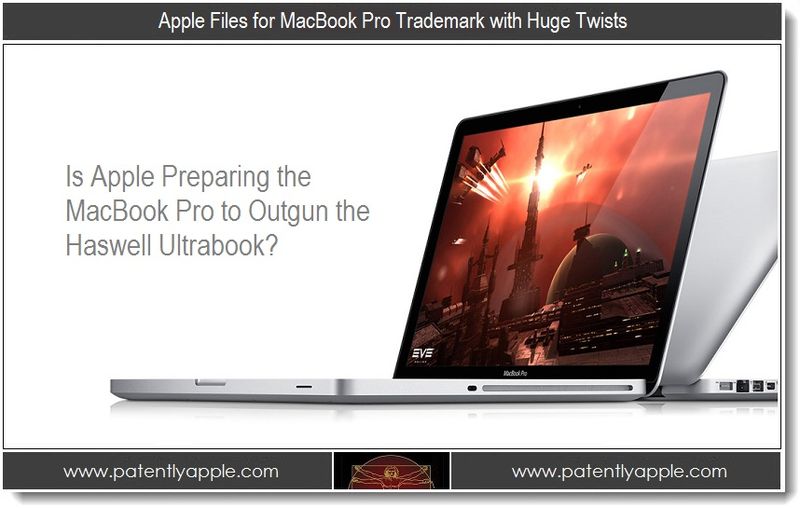 On February 21, 2011 a new MacBook Pro trademark was filed by Apple and the new oddity in their International Class 009 verbiage was that of "power converters." At the time we pointed to a new fiber optic patent that would have made sense and low and behold, Apple introduced Thunderbolt on February 24, 2011. Well, Apple has done it again. They've filed for a new MacBook Pro trademark in Hong Kong, and yes, it has a new oddity. In fact there's two listed. And this time, they're whoppers!

Is Apple Preparing the MacBook Pro to Outgun the Haswell Ultrabook?

One of the reasons that I've followed Intel's IDF keynotes over the years is to get a feel for what the PC Industry as a whole is thinking about. During the IDF June 2011 session, Intel made it clear that their 2013 Haswell Ultrabook would be a tablet when you want it and a PC when you need it.

In November 2011, HP's CEO Meg Whitman stated that "Apple does a great job. We need to improve our game and our products to take over the leadership position. Apple could go past HP in 2012. We will try to become the champion in 2013…" Why in 2013? – Because the Haswell based Ultrabook will be a both notebook and tablet. It's also an architecture that will support Windows 8 for work and Metro for the tablet side of the equation. But for HP, it will also be able to run their next generation Open Source based WebOS.

Do you think that Apple will just shrug it all off in conceit? I doubt it. I doubt that very much. The idea of merging an iPad with a keyboard or MacBook dates back to at least 2008 for Apple. And today, we've be given another hint that Apple is at least wanting to protect this just-in-case-scenario of creating a MacBook Tablet. The clue is presented below in Apple's trademark filing under International Class 009. 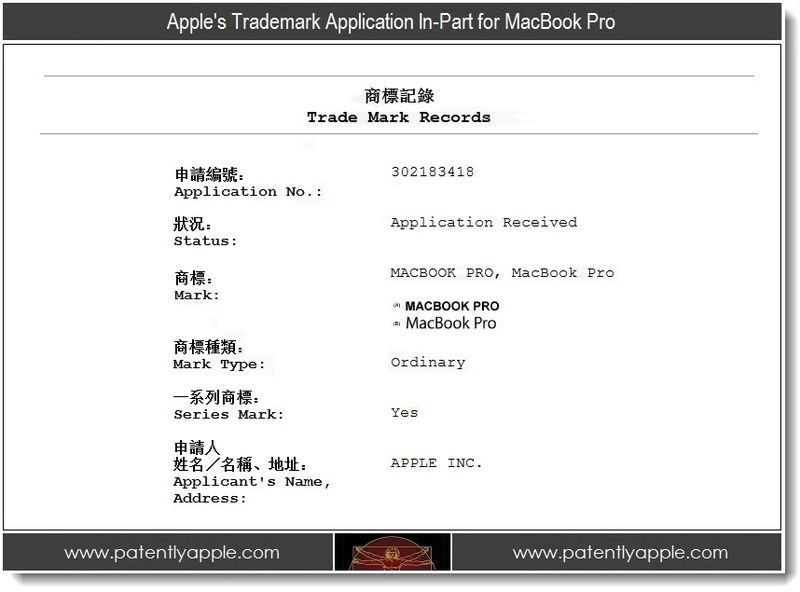 Apple filed for the "MacBook Pro" trademark under a single Class being International Class 009. It reads as follows:

If you're thinking that the list noted above is simply standard legal boilerplate verbiage – then think again. Go back to their last MacBook Pro filing that we linked to earlier in our report. It was only filed a year ago and there wasn't any mention of a touchscreen, tablet computer or electronic notepad for that matter.

While it may not be a smoking gun in and of itself, it's certainly a sign that Apple is at least thinking about such a new breed of notebook. I know that it's definitely a high priority on my list of future devices. In fact, I'll be buying one in 2013 no matter if it's from Apple or HP. It's just a unit that I need for work and one that has been on my wish list for at least the last four years now.

That's my position and I'd love to hear your thoughts on the matter. Would you buy a MacBook Pro – iPad combo device in 2012 or 2013? And better yet, do you think that this could be one of the products that Tim Cook was thinking of when he told Apple shareholders that Apple was preparing mind blowing products for 2012?

Update March 9, 2011: Apple has filed for the "MacBook Pro" trademark in Europe under International Classes 9, 16, 35, 37, 38 and 42. What's interesting here is that we see yet another twist. This time around Apple has added MacBook Pro trademark coverage for "telecommunications and multimedia goods and accessories, mobile phone, handheld mobile digital electronic devices." This would provide Apple's MacBook Pro with protection for the Telephonic MacBook.

I very much agree. An iPad is a great tool, but right now that's simply all it is. If we were to get an iPad/MacBook that runs OS X rather than iOS with some kind of haptic keyboard, then Apple's assertion of the end of the PC will really be true!