Sony reveals a few HDTV Features on the Drawing Board 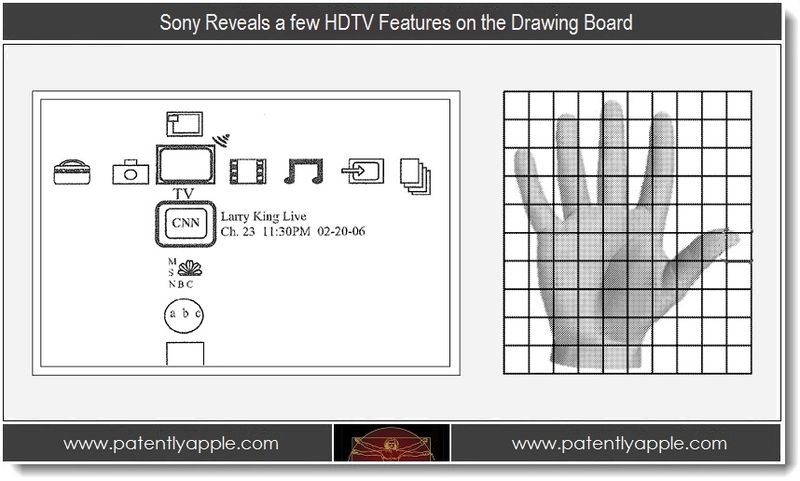 Even though it's been called the idiot box by all of us at one point in time, it's still where many of us end up in front of when our never ending day gives us an hour or two to kill. All we want is to turn off the net and get a little entertainment that's a little more polished – be it a movie, TV show, video game or even a little music. The biggest and coolest thing to come to TV of late has been the shift to the flat screen. Playing video games on these units in 1080p is just phenomenal. Yet the question always is: what's next? In today's report we take a look at four recent Sony patents that definitely provide us with a peek at what they're working on. Some of the ideas are rather interesting and are bound to be features that we'll all take for granted in just a matter of years. And again we'll ask the same old question: What's next? When it comes to the idiot box we're still hopeful that one day it will joint its brethren in the smart-device category. Yes, the smart TV is coming to a showroom near you, one day; and all of us idiots just said Amen.

Sony Thinks that Landline Phone's Still Have a Place in Society

Sony states that the landline telephone remains important even with burgeoning wireless telephone use. Landlines are often available at cheaper operational costs than wireless phones, and market shares for some telephony applications such as voice over Internet protocol (VoIP) and video conferencing remains relatively small for reasons of bandwidth. Thus, there is still a strong need for a dedicated landline telephone in meeting rooms, hotel rooms, and in the home.

Sony believes that by combining a television with a landline phone it'll make our lives a little easier. It'll reduce the number of devices we need in a room and hopefully reduce the number of interruptions to our TV viewing because you'll be able to configure your TV settings so as to send calls automatically to a built-in answering machine without a single ring ever being heard. On the other hand, you could set the TV to automatically pause your programming so that you could take the call over your television speakers.

In some embodiments Sony states that the telephone module may be designed right into the TV chassis or work with a set top box set that's designed to work with a public switched telephone network (PSTN) over a landline. Other features noted in the system are highlighted in the patent graphics below. 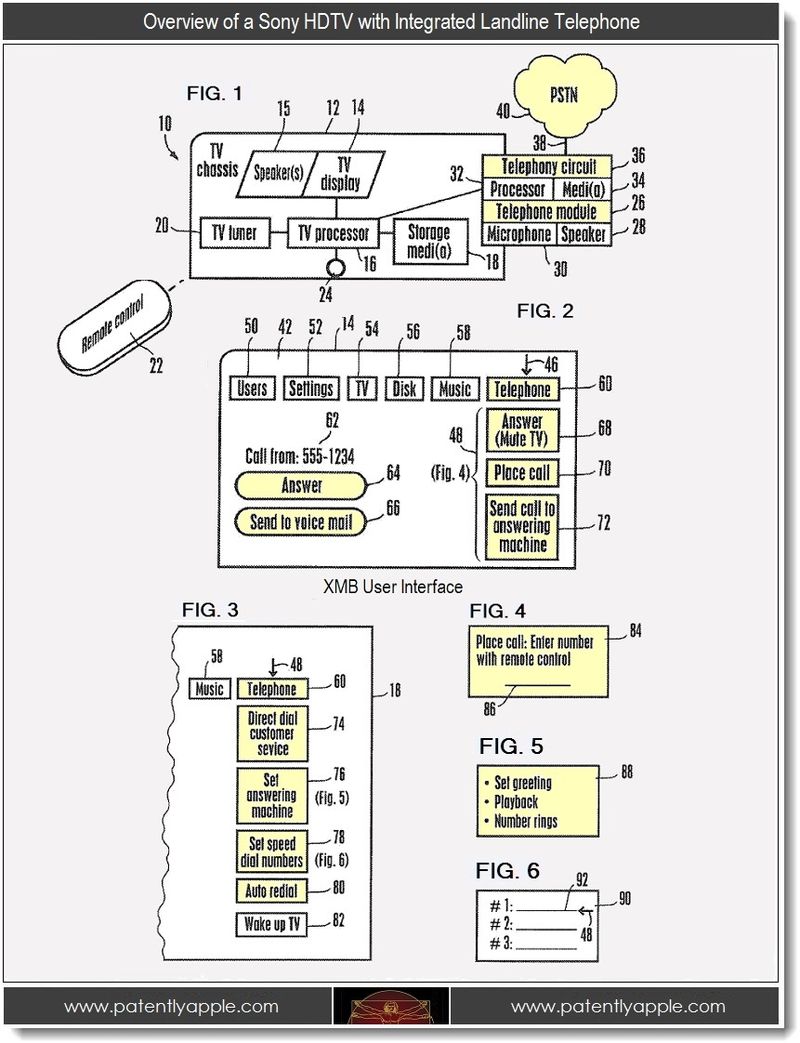 Sony's patent FIG. 1 is a block diagram of an example system in accordance with present principles, schematically showing interior components of the TV; Patent FIGS. 2 and 3 are screenshots of an example user interface (UI) implemented as a cross-media bar (XMB) including a "telephone" category and showing items in the telephone category; and patent FIGS. 4-6 are screenshots of example sub-UIs that may be invoked from FIG. 2 or 3.

In a secondary Sony patent regarding their ideas on future television features, we find that they're considering borrowing heavily from their PlayStation user interface. If you've ever used a PlayStation, then the screenshot concepts shown below should be easily understood. 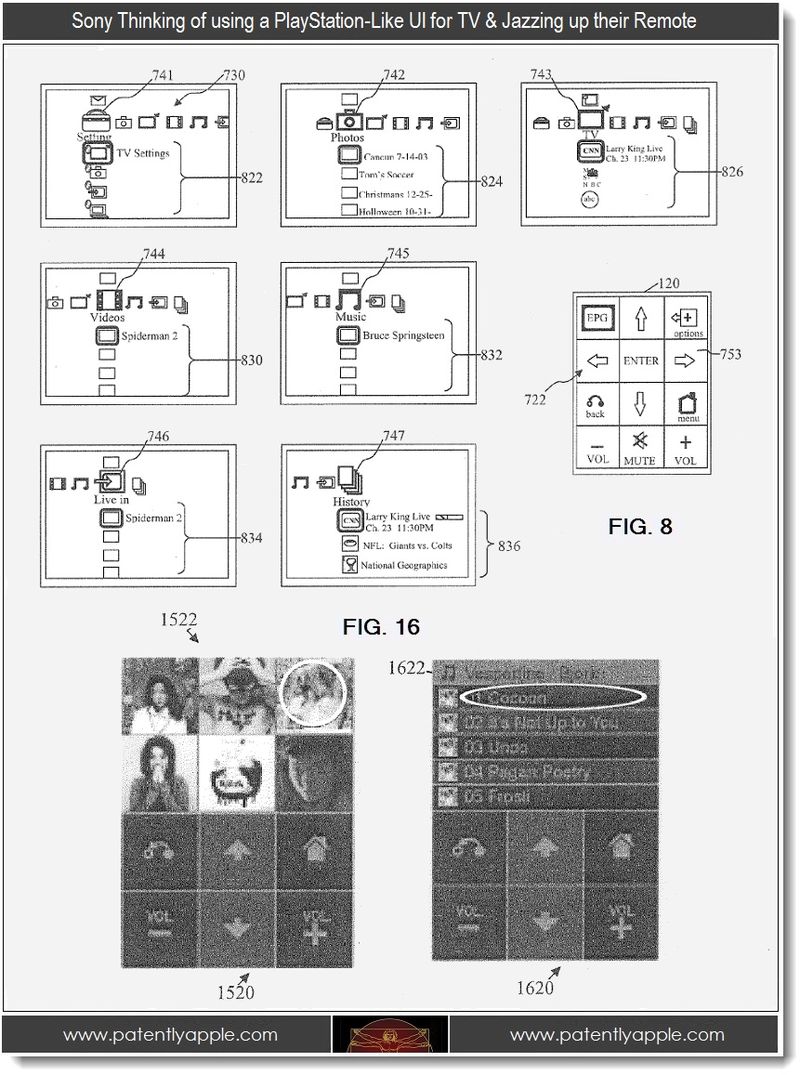 Where it gets interesting is seeing Sony's photo-shots in patent FIG. 16 illustrating a possible future remote. Having photo-shots tells us that they actually have a working model. In one of the photos we're able to see how the remote will be able to call up a music list of your favorite-tunes and play them on your TV. But the one aspect that is really cool about the remote is that it could work with your landline phone as noted in the earlier patent that we presented. Here we see that the remote is able to present the user with digital photos of their top contacts so that making a call through this TV connected to a landline is really quick and easy. In patent point 47, Sony lists that the TV will be compatible with the "public switching telephony network."

It's also worth noting that Sony's Kazuo Hirai will become the president and CEO of Sony as of April 1, 2012. Kazuo Hirai, according to Wikipedia, was instrumental in Sony's success in playing a fundamental role in the rise of the PlayStation in the United States. This bodes well for the PlayStation-Like UI coming to future Bravia televisions. 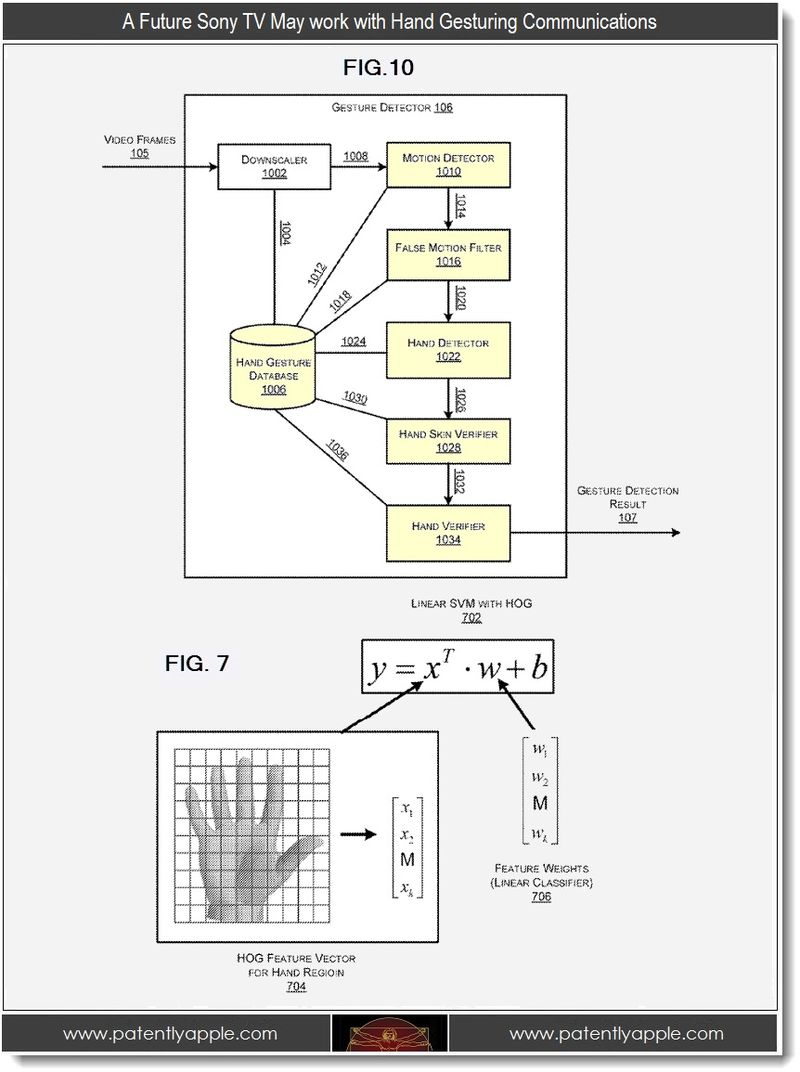 Sony's patent also reveals that a Future TV may integrate a camera so as to detect new hand gesturing. Of course this also will allow for video conferencing which supports earlier patents discussed. 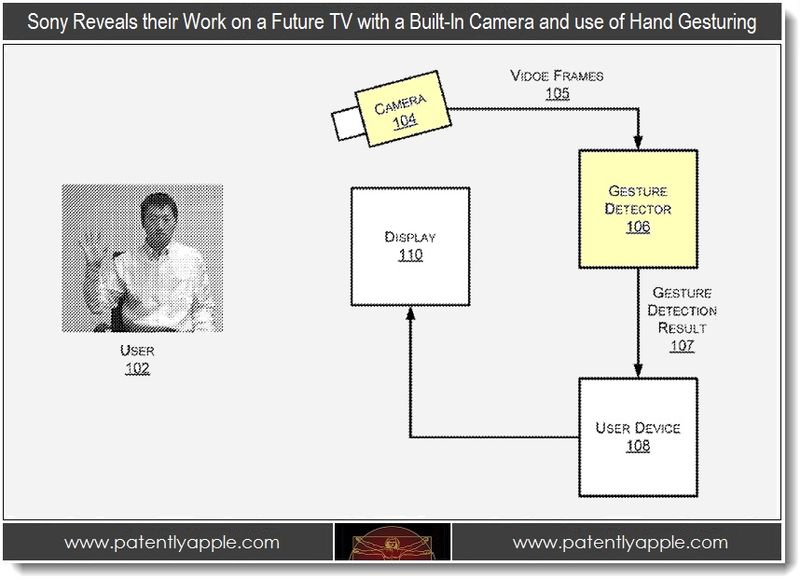 Sony's patent primarily describes and details the actual technology behind their gesturing system and limits what gestures they're working on. The patent limits the description of gestures to an open-hand that will start the TV and a closed fist gesture to turn it off. I'm sure their key TV gestures will be kept a trade secret until this TV model debuts sometime in the future. This is likely to take a few years before it's ready for prime time.

And lastly, we found a recent Sony patent stating that future televisions will sport touch displays. This illustrated in Sony's patent figure 20 below. 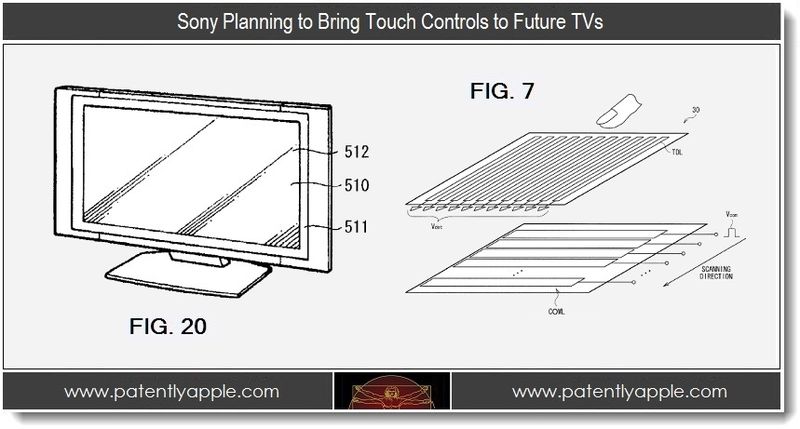 While touch controls on a home TV may have its place, the use of such touch based televisions may have more use for business presentations and the like.

All in all, we see that Sony is working on several new interesting ideas for future HDTVs. I'm personally a big fan of both Sony's Bravia XBR and PlayStation, so seeing Sony bring the PlayStation UI to their Bravia line-up may be a very interesting idea if they pull it off just right.

While it's interesting to see Sony's patent on hand gesturing for TV, it may end up being merged into a hybrid Sony-Microsoft unit of sorts. We pointed to Microsoft working with Sony in our report last week titled "Microsoft Invents New Kinect Feature Called the "Seekbar." Sony is likely to take the lead here with Kinect, so stay tuned.

At the end of the day, our future televisions are bound to be different than they are in 2012. The big players like Microsoft, Google, Sony and Samsung are all working on advanced remotes. In fact we just reported on one last week titled "Google Developing Siri-Like User Interface for Google TV.

Yet you can't honestly write report on the future of television without at least dropping the hint that one day the ten ton Gorilla in the room known as Apple will go beyond their hobby device and go for the kill with a stunningly crafted HDTV by the great Apple designer Sir Ive and team. Such a TV would likely integrate both Siri based voice controls in addition to an advanced touch centric TV remote and maybe, just maybe, a wild 3D gesturing system as an Apple patent has shown us. When or if you have a moment, you should check out some of the other Apple patents on this topic in our Apple TV Archives.

For now, the makers of TV-Land devices are throwing every gimmick they can at us in the hopes that one will eventually be the killer app they all hope for. But it's not here yet, so there's still room for a big surprise that may be in the wings as we speak. For now, we all know that something big is on the way; it's just a matter of time.

Apple has a different take on remotes. I suspect that Steve Jobs hated them like he hated fans in computers. When (not if) Apple ships a TV, most or all of the remote control functionality will be in the TV. Even controlling other equipment like disc players and DVRs will be done by the TV. Apple has to design their TV this way in order for Siri to be a complete control system, and to avoid having conflicts from multiple potential remotes in the form of iPads, iPhones, etc.

And they have multiple patents that would support this approach. Sony and others can try ever more elabolate remotes and game-based menus, but the Apple TV design is likely to make them appear amateurish and obsolete.