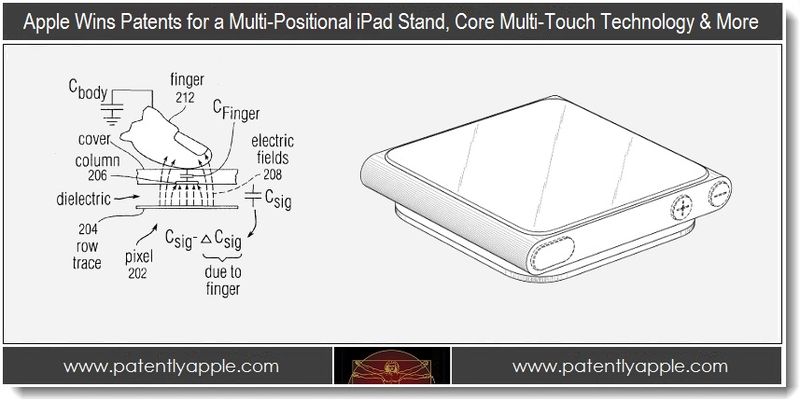 The US Patent and Trademark Office officially published a series of thirteen newly granted patents for Apple Inc. today. The notables within this group include patents covering the design of the iPod nano; Apple's fun and goofy photo booth application; another core multi-touch patent gift wrapped for their legal team and finally, a granted patent for a future built-in multi-positional stand for the iPad. Apple's proposed stand would provide users with superior angulation for typing on the iPad's virtual keyboard in landscape mode.

Apple has received a Granted Patent that relates to one of Apple's core patents relating to touch sensor panels used on Apple's iPhone and iPod touch. The invention that was initially filed in 2007 and updated in 2010 is fully described in Apple's patent Abstract as follows: 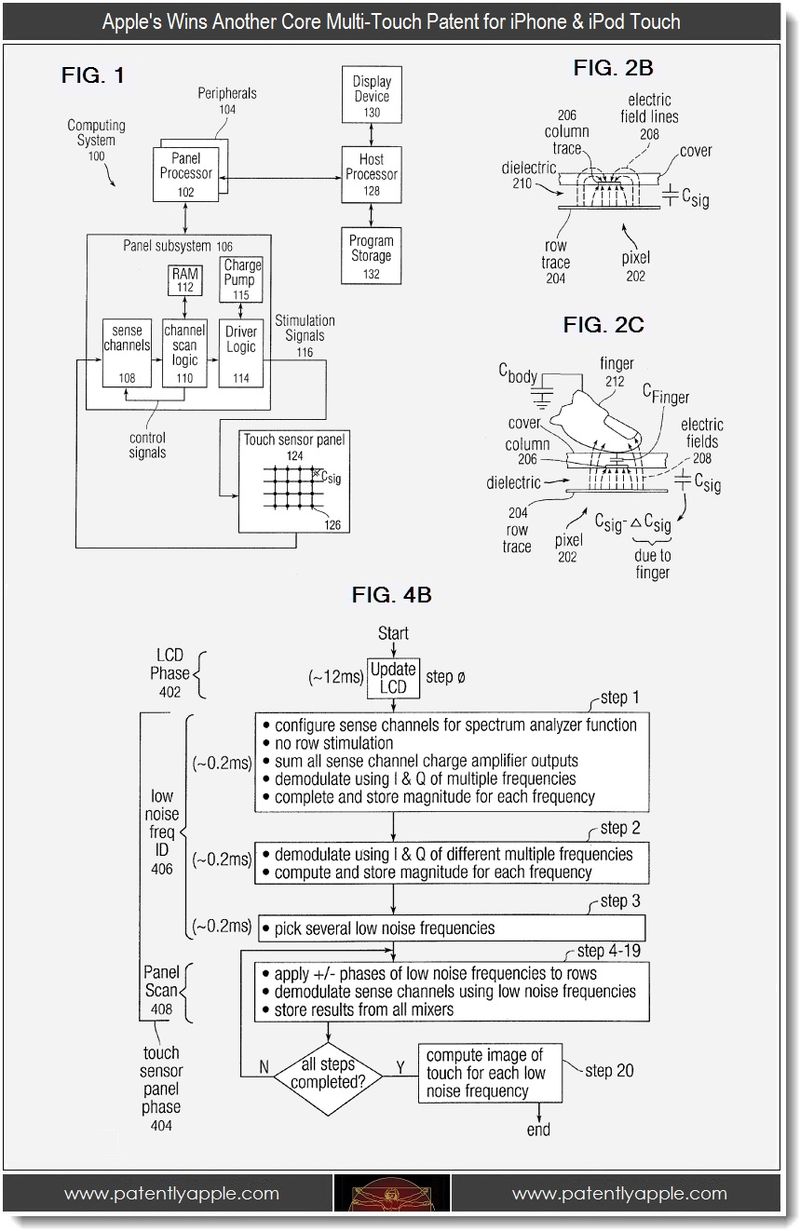 Apple has received a Granted Patent relating to a possible future built-in multi-positional stand for the iPad. The proposed built-in stand would be able to pivot so as to provide the user with the versatility of working in either landscape or portrait modes while allowing the unit to be further angled just right for use with the iPad's virtual keyboard. The original patent was only revealed a year ago this month. For those interested in more details and graphics, review our original analysis of Apple's patent. 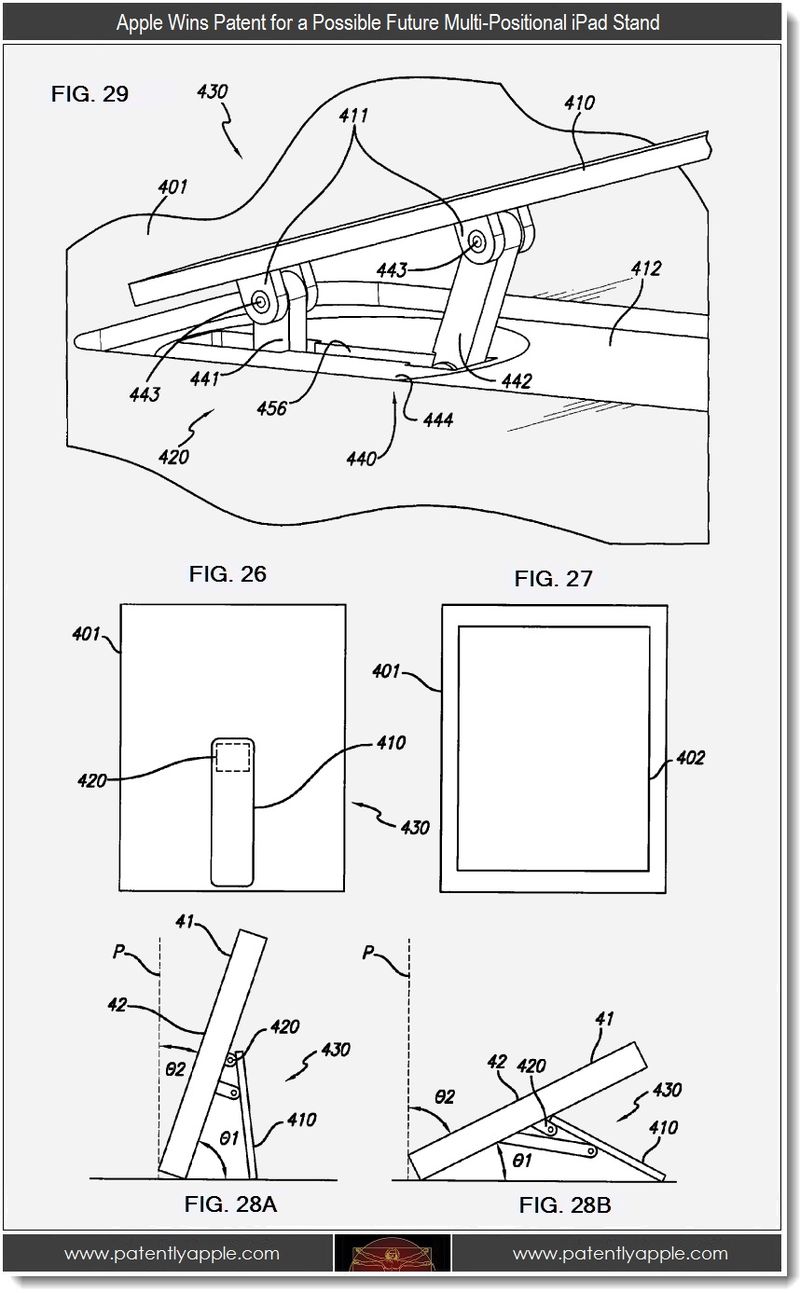 To review Apple's thirty-eight patent claims, see granted patent 8,118,274. Apple credits Stephen McClure and Joshua Banko as the inventors of this patent which was originally filed in Q3 2009. The question is: Did Apple decide on the iPad Smart Cover over the new design laid out in this patent or could they still deliver this design that offers users a superior portrait mode option? Time will tell.

Apple has received their second Granted Patent for Photo Booth, an application which debuted back in 2005. Apple's first patent win for Photo Booth was granted to them in December 2011. The application has come a long way from its original special effects for photos taken with the built-in iSight camera in Macs. Today's Photo Booth is as fun and Goofy as it's ever been and Apple is promising to bring it to their handheld devices in the future with new advancements. 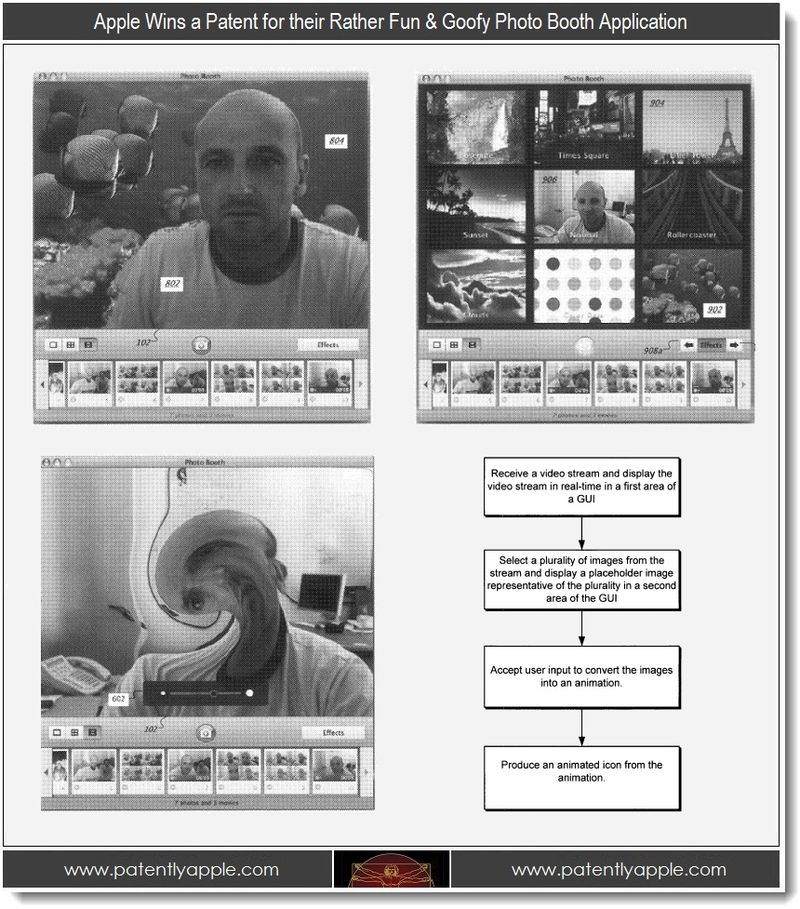 To review Apple's twenty-six patent claims, see granted patent 8,122,378. Apple credits Jean-Pierre Ciudad, Erika Misaki, Michael Stochosky and Mike as the inventors of this patent. The last filing date of Q2 2007 is listed on the patents though there are so many other dates associated with this patent that's it's too difficult to figure out its first filing date. The names listed on this patent suggest that Apple may have acquired this application from the listed inventors.

Apple's sixth generation iPod nano has been granted design patent D654,506 by the US Patent and Trademark Office. This particular iPod nano design is the first to bring a multi-touch display. 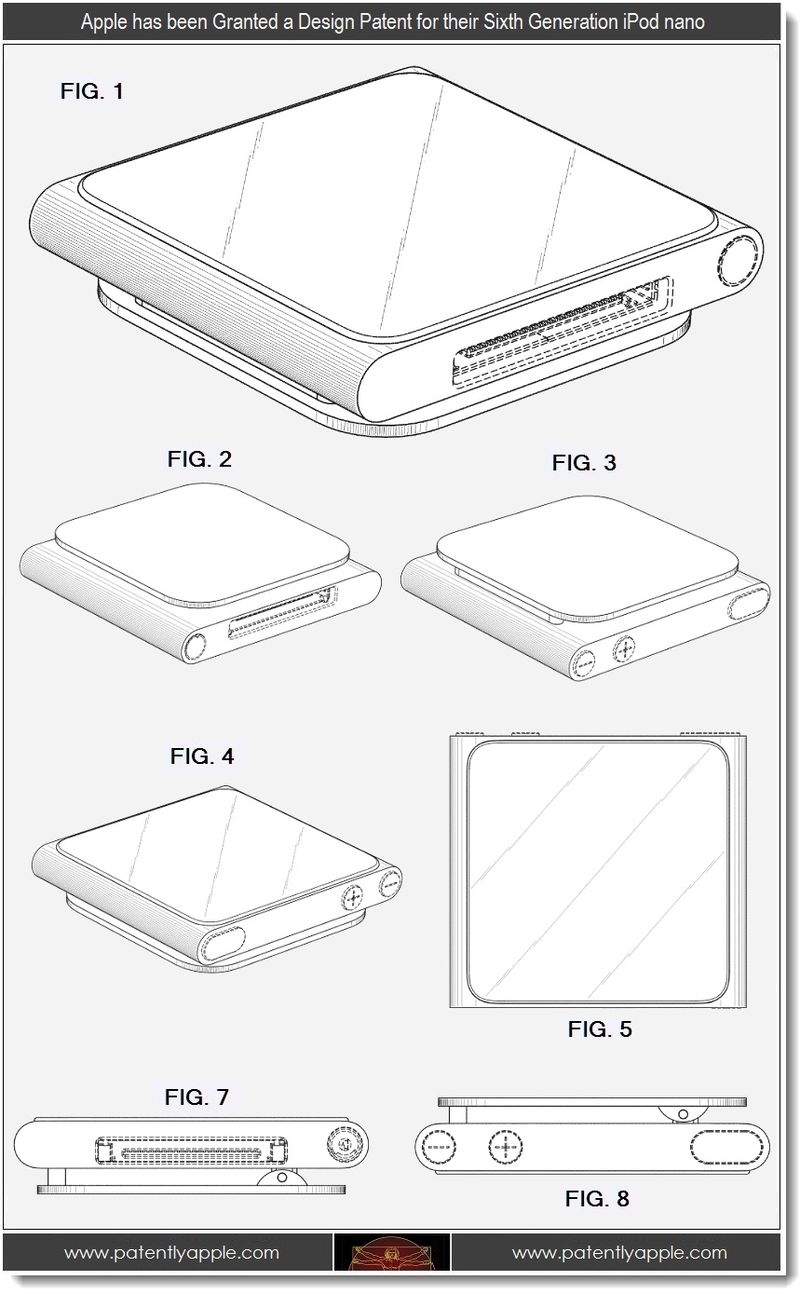 Apple has been granted patent 8,118,617 for their invention of a new audio Jack assembly that we originally covered in April 2011. The timing from patent application to granted patent only took ten months. Apple's patent figures 1, 3C and 3D are from today's granted patent. 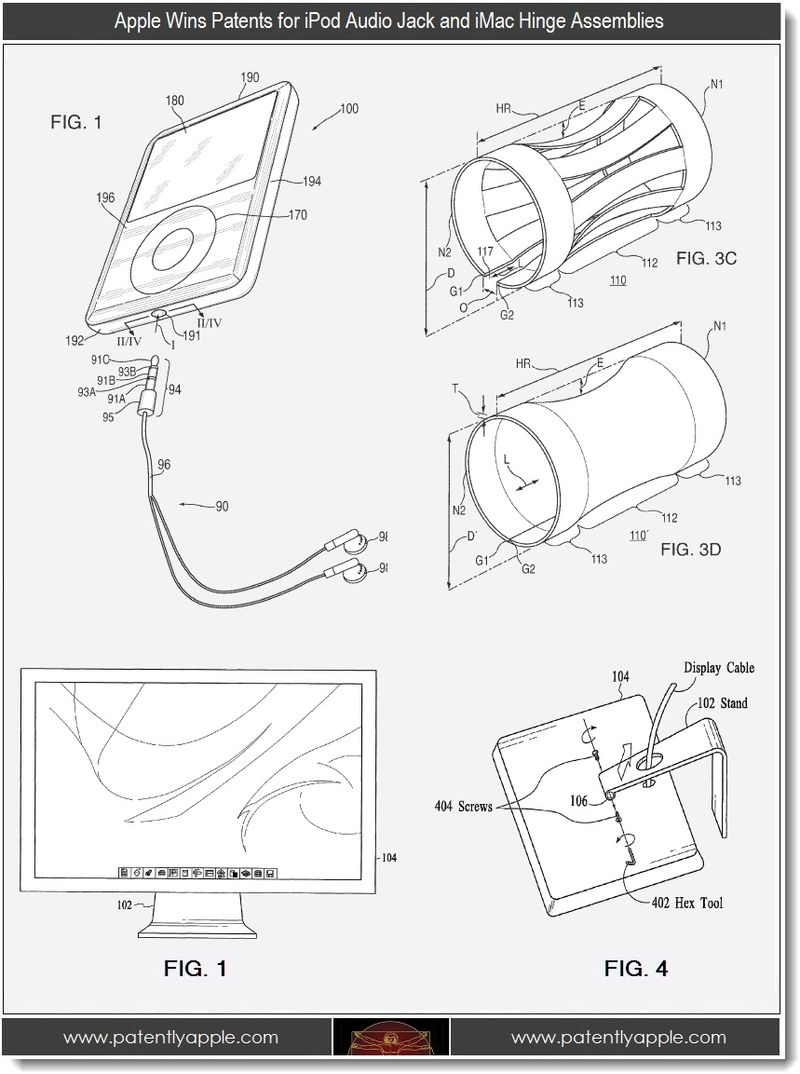 Apple has been granted their second granted patent (8,118,269) relating to the iMac's hinge assembly. The hinge mechanism is adaptable to an industry standard mount and a non-industry standard mount. A system and method in accordance with the present invention allows for the replacement of a non-VESA standard compatible display mount with a display mount that is compatible with the VESA standard. We covered a more detailed version of a hinge patent with a slightly different angle covering the iMac's Magnetic Release Latch Mechanism & Stand Hinge in May 2011. Patent Figures 1 and 4 noted above relate to Apple's latest granted patent.

8,121,294 - System and method for a derivation function for key per page. Apple's invention relates to digital rights management (2008).

8,121,901 - Method and apparatus for providing compatible components for purchase. Apple's invention relates to online purchasing of products, and more particularly to ordering and purchasing components compatible with particular hardware devices of a computer system (2005).

Look forward to seeing the multi-positional iPad stand in real life, since I really do love my iPad.