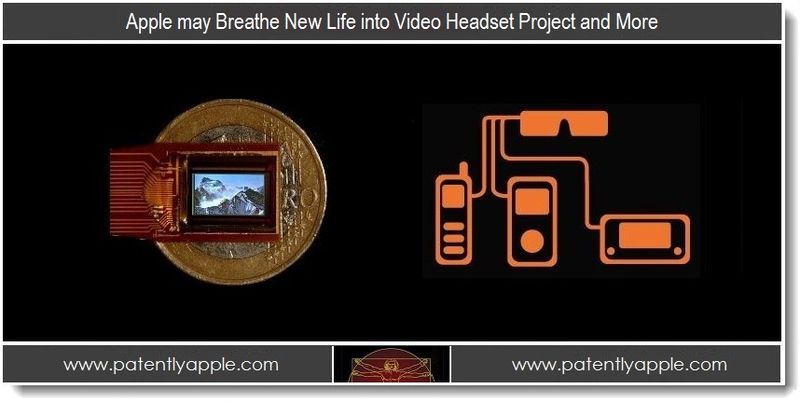 A recent rumor report stated that Google would soon be releasing new video glasses into the market – yet concluded by stating that "the product is still a very long way from being finished." It also stated that Google's prototype looked like a pair of Oakley glasses. That's a humorous example considering that their newly acquired Motorola tried pushing these glasses back in 2005 and failed miserably. Though at the end of the day, there's no doubt that one of these days video glasses will emerge from either Google or Apple – who just happens to have a granted patent on such a device. Interestingly a recent market development has come to light that could give both of these video headset projects a little push in the right direction. We'll take a look at that development that could make the difference. Additionally, our report takes a look at new information that arose during a financial conference with Sharp's President earlier this month that briefly touched on their upcoming IGZO displays for tablets. The question is, which company will be first to introduce these new displays into the market?

Every few year's new technologies or processes come along which have the power to breathe new life into various tech sectors and their respective research projects. A company in France by the name of MicroOLED develops high-performance microdisplays for near-to-eye applications. Their displays are aimed at key at products such as consumer video glasses for mobile HDTV, augmented reality applications, medical goggles for HD endoscopies and viewfinders in cameras.

In a press release dated January 27, 2012, the CEO of MicroOLED Eric Marcellin-Dibon stated that the company was really excited about their 5.4 million pixel density 0.61 inch diagonal OLED microdisplay that is superior in picture quality to any product in its category. The new microdisplay will address needs in three areas: head-mounted displays for consumer and surgeons where high resolution quality of colors and contrast are a must; professional camera and camcorders, where picture quality is key; and night vision applications, where heightened contrast and uniformity enable defense and security professionals to improve the performance of detection and identification equipment.

The 5.4 million-pixel density microdisplay comes in full color (16 million colors), SXGA or monochrome formats (2,560 by 2,048 pixels per inch), both with digital video input. MicroOLED's marketing materials noted above show off a graphic illustrating how future video glasses will work in conjunction with mobile devices such as smartphones, PDA's and MP3 players. It's pretty hard not to miss the visual of an iPod like image. For someone like Apple, there's an opportunity to bring this type of phenomenal display quality to their patented video headset device and/or at the very least, their iPod nano.

In 9to5Google's report, Seth Weintraub stated that "Google is apparently unsure if it [video glasses] will have mass-market appeal." And therein rests the problem for any major OEM thinking of bringing video glasses to market. For this to fly, Apple would have to seriously bring the right mix of applications to market or risk it being another "hobby" product like AppleTV. Then again if anyone could find that perfect mix, it's Apple. And, if Apple is truly considering a future HDTV, then selling a video headset accessory supporting their TV programing on other mobile devices would make perfect sense – and this is where the new microdisplays from MicroOLED could come into play.

And so with vastly superior microdisplays coming to market this year offering HDTV quality to video glasses, you have to wonder if this development could breathe some life into Apple's patented video headset project and beyond. Although it's speculative at best at this point in time, there's one little twist that may raise your eyebrow either way on the status of this project.

Richard DeVaul, who was first hired at Apple back in March 2010 to work on wearable computing such as Apple's video headset and more, is now over at Google. At the end of the day are we to view DeVaul's move to Google as one that could support the video glasses rumor and actually ignite a race to market between Apple and Google? Or does it say that Apple has already given up on the video headset project and that's what Google is inheriting? I guess we'll know the answer to that question in the months or years ahead.

Update April 04, 2012: Google's video glasses project came to light today. It's called Project Glass. This will have limited appeal unless there's a work around for people with prescription glasses. That said, it's pretty cool, in theory. See the related video below.

Apple definitely has a way of making sure that the market gets conflicting reports about what new upcoming features and/or products are coming to market at any given time. It's a marketing science at Apple and kudos to Phil Schiller on that front. By keeping the competition in the dark until the actual release of a product at a special Apple Event, the competition is unable to prejudge or dampen the hype generated by Apple afterwards.

Here's a case in point. In late December we covered a news report that stemmed from DigiTimes that strongly suggested that Apple was considering a shift from IPS to IGZO displays from Sharp. Then in January we presented a contradictory report that stemmed from a report coming from Korea's Electronic Times Internet news that basically claimed that Sharp just didn't make the cut for Apple's upcoming iPad 3.

Now, weeks before the iPad 3 is due, comes some rather interesting news out of Japan worth noting. A recent news conference covering Sharp's President on their recent Financial Results coughed up an interesting factoid that could once again stir things up a bit. On February 1, 2012, Q&A with Sharp's President Mikio Katayama revealed the following:

Q: "It was announced today that planned volume production of IGZO panels at the Kameyama Second Plant was delayed by two months. What is the cause of the delay?"

A: Katayama: "It is not that there is a problem in the production of IGZO panels. The delay occurred in the process of embedding panels in final products. But we will start to ship IGZO panels in volume within February 2012.

Speaking of IGZO panels, we targeted them only at smartphones and tablet computers at first. But, probably, we can apply them to larger screens. Specifically, there is an increasing demand for our IGZO panels for use in notebook computers equipped with a high resolution display and monitors (for desktop computers, etc). In regard to middle- and small-size panels, we intend to expand the business as early as possible by taking advantage of IGZO panels."

While there wasn't a definitive link made between Sharp's IGZO displays and the upcoming iPad 3, we find that their sharp ramp-up of IGZO display production for tablets in February to be very interesting considering Apple's iPad 3 timeline. At the very least, Sharp is intimating that some OEM is going to debut tablets with IGZO displays in the coming months ahead. The question is: will they end up in Apple's iPad 3 or upcoming Android tablets?

While we may only have to wait a few more weeks to find the answer to that question, I find that the admission that IGZO displays could be making their way to notebooks and desktops just as interesting a story. Apple's displays have always been vastly superior to those on the PC side of the equation and so this may open the door for future MacBooks and the iMac to launch with insanely high resolution displays later this year via IGZO displays from Sharp. Time will tell if that pans out – but it sure looks promising.