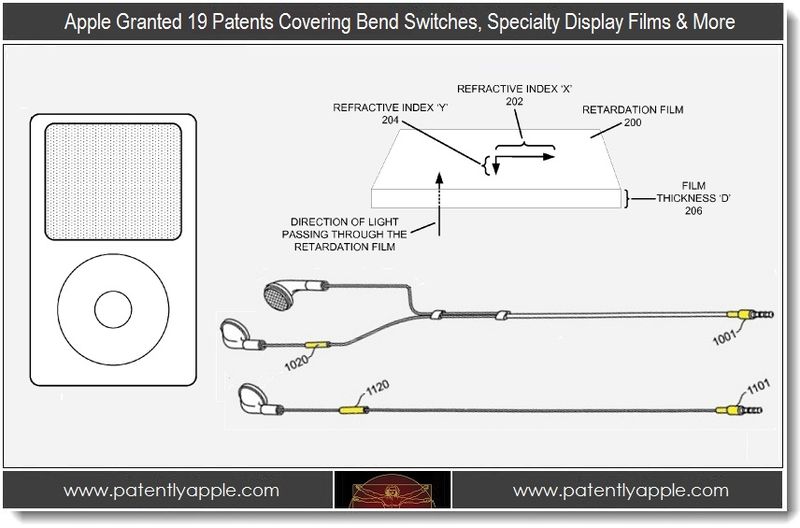 The US Patent and Trademark Office officially published a series of nineteen newly granted patents for Apple Inc. today. Today's report covers an interesting yet eclectic mix of granted patents including one that credits the late, great Steve Jobs for the MacBook Air's design. Update: Will Apple use their MacBook Air design patents to challenge new Ultrabook challengers?

Apple Wins a Patent for Bend Switches for Wired Headsets

Apple has received a Granted Patent that relates to a "bend switch" that is incorporated into their "Earphones with Remote and Mic" headset. The headset features a small and unobtrusive profile with specific device controls such as adjust music volume, video playback or even answer or end calls on an iPhone. 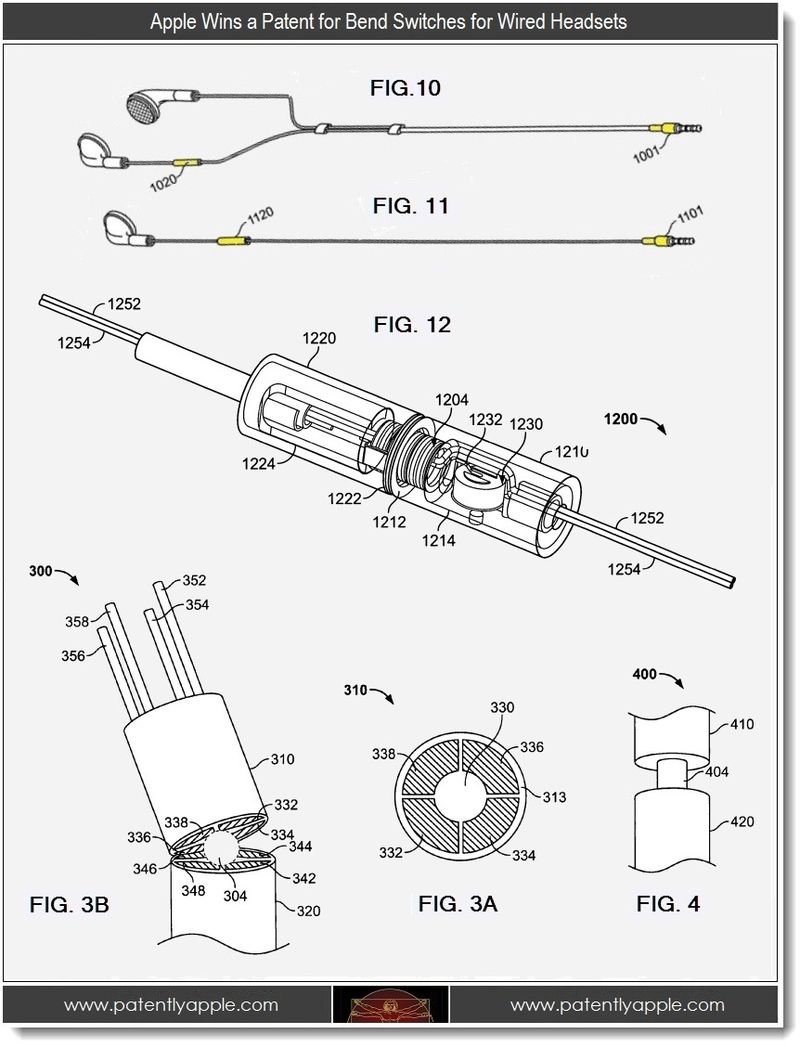 Apple has received a Granted Patent relating to methods and systems for protecting a MacBook or any device with a hard disk drive from the destructive force of an impact. 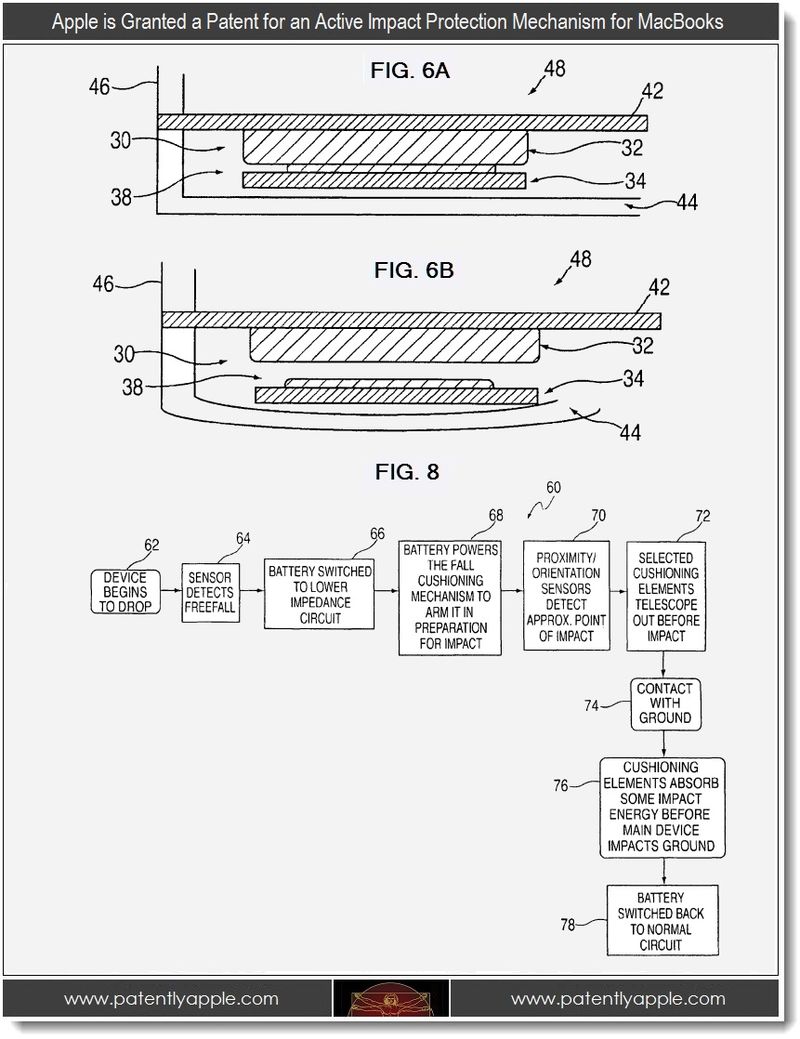 Apple's First Patent Claim: Apparatus for cushioning an object against impact, comprising: a sensor for detecting an unrestrained change in position of the object; an electromechanical actuator having a first member affixed to a portion of the object, and a second member movable between a first position adjacent the first member and a second position further from the first member than the first position, wherein the first and second members are magnets, and wherein at least one of the magnets comprises an electromagnet; and a controller that is electrically coupled to the actuator and that is responsive to the sensor for activating the actuator by driving current through the at least one of the magnets that is an electromagnet to move the second member from the first position to the second position.

To review Apple's other 39 patent claims, see granted patent 8,113,494. Apple credits Ashwin Sunder as the sole inventor of this patent which was originally filed in Q3 2008. Just as Apple receives a patent for this invention, MacBooks may be shifting to Solid State Drives in the next year or two which will render this invention irrelevant.

Apple Wins Patent for a Display that Emits Circularly-Polarized Light

Apple has been granted a patent that generally relates to liquid crystal displays. More specifically, Apple's invention relates to a liquid crystal display that emits circularly-polarized light and thereby reduces perceived distortion when the display is viewed through linearly-polarizing filters such as polarized sunglasses. For more details on this patent, see our original March 2010 report covering this subject matter of Apple's use of a retardation film on certain iOS devices. 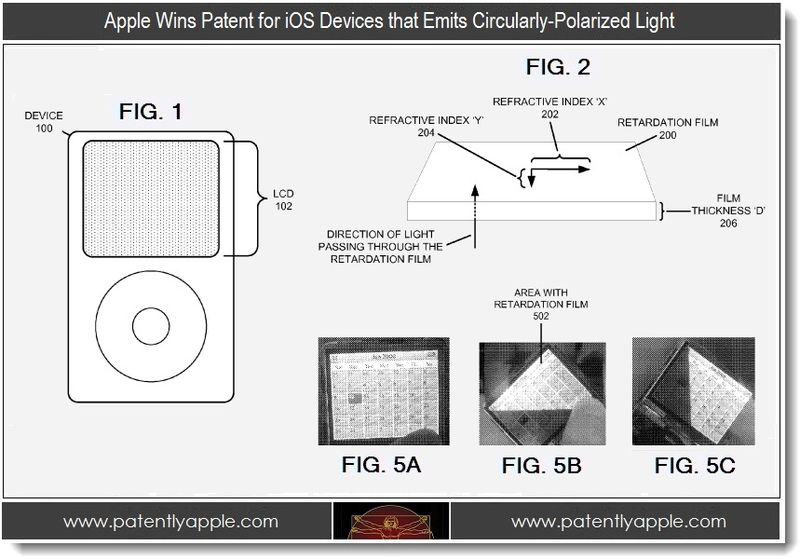 To review Apple's other 12 patent claims, see granted patent 8,115,892. Apple credits John Zhong, Wei Chen, Cheng Chen, Victor Yin, and Shawn as the inventors of this patent which was originally filed in Q1 2011.

Apple has received a Granted Patent which relates to the "Airplane Mode" iOS device settings feature that could disable communications functions. 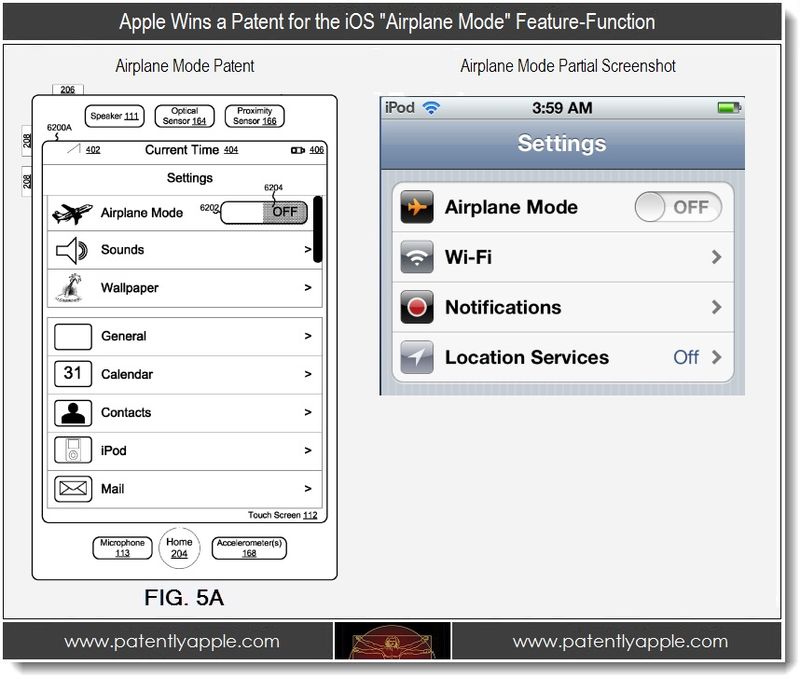 To review Apple's other 21patent claims, see granted patent 8,116,807. Apple credits Michael Matas as the inventor of this patent which was originally filed in Q4 2007.

Apple has been granted their sixth design patent for the MacBook Air since September 2009. The late CEO Steve Jobs is listed as one of those credited for the design.

Update: It should also be noted today that that a new report posted by TUAW states that Apple is forcing Pegatron to stop production of a MacBook Air lookalike called the Zenbook. It sure doesn't hurt having serveral recent design patents in your back pocket to make the point that someone is infringing on your design. You have to wonder if apple is now going to begin legal action against the new wave of MacBook Air copycats in the wings. I guess if Apple is paying for a battery of lawyers to file the patent filings, they may as well use them to enforce them as well. Time will tell. 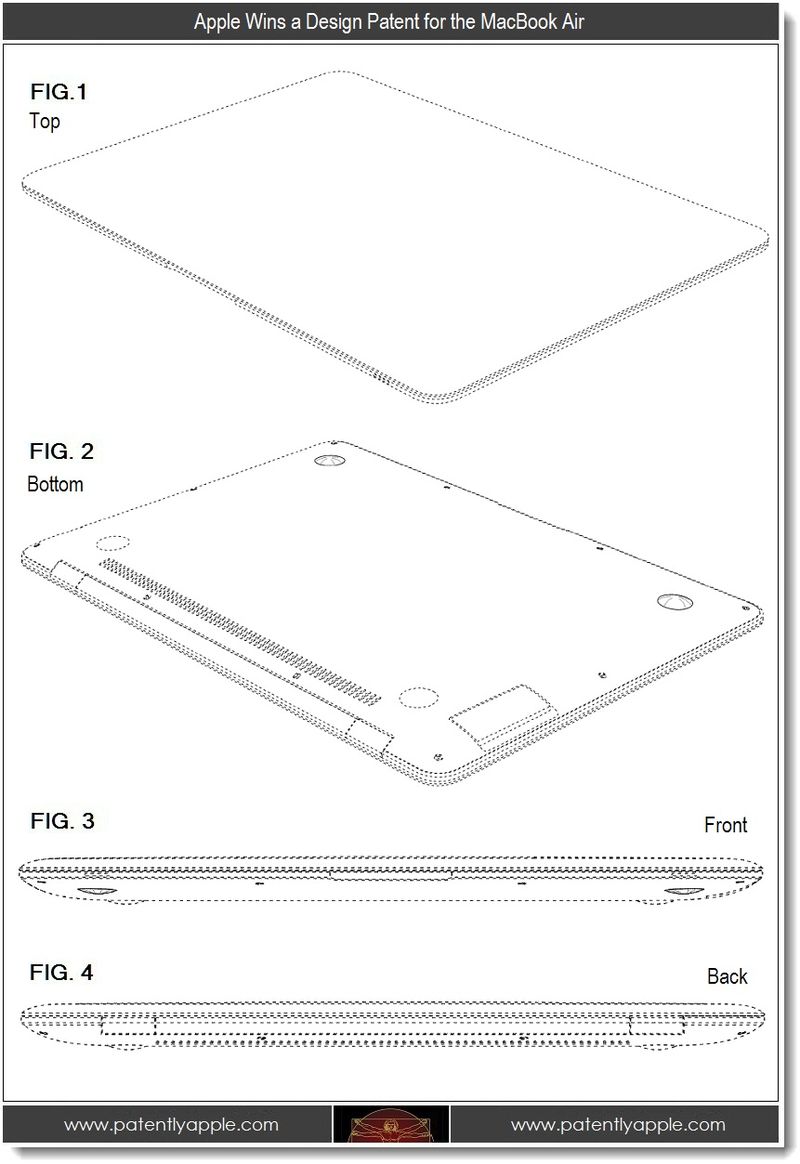 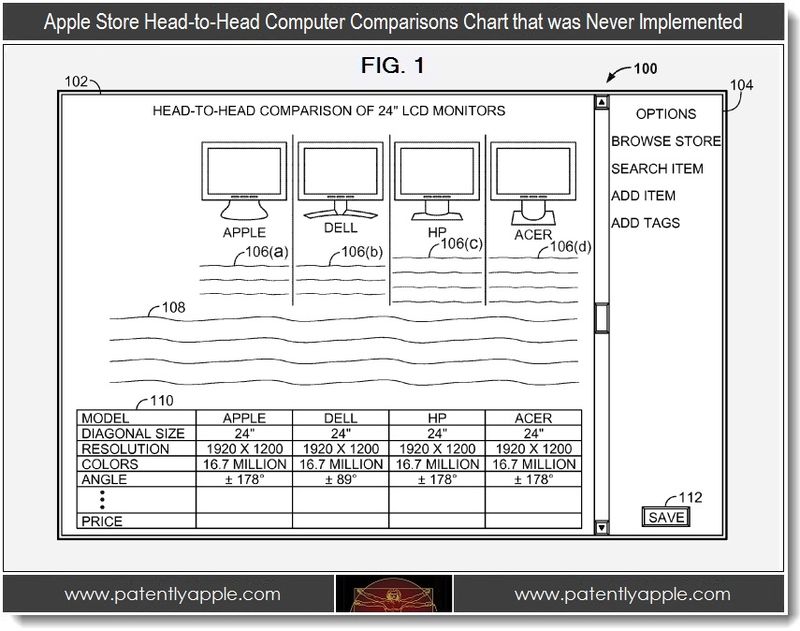 Apple invented an Apple Store computer price comparisons chart/form that was designed to allow members of the Mac Community to enter in prices of competing products form the likes of Dell, HP, Acer and others as noted in the patent figure above. It's an idea that has yet to surface.

8,116,586 - Estimating and removing distortion from an image 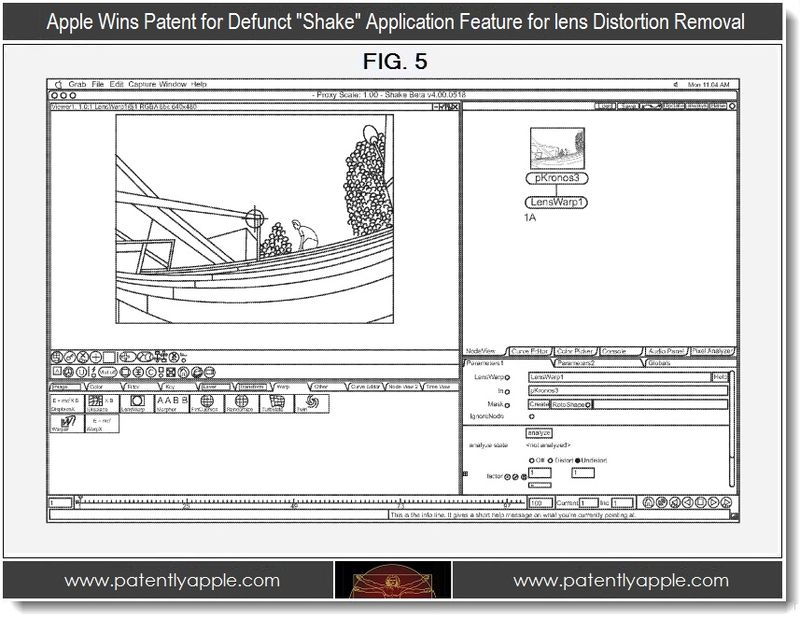 Apple's invention relates to their now defunct "Shake" application feature that dealt with video processing and in particular to lens distortion removal. More than likely this feature has since been rolled into Apple's Final Cut Pro X Application in some capacity.

8,115,825 - Electronic device with two image sensors. The patent relates and details Apple's iSight camera in a MacBook having two cameras (one black and white and the other being color).

Apple's invention is related to the field of processors and, more particularly, to handling misaligned memory operations in processors.

8,117,651 - Method and system for authenticating an accessory

Apple's invention relates generally to electrical devices and more particularly to electronic devices such as media players that communicate with accessory.

Apple's invention relates generally to electronic displays, and, more particularly, to a method, apparatus, and system for providing an image preview of a data set.

8,117,260 - Method and apparatus for listening for incoming calls on multiple port/socket combinations

Notice: Going forward, Patently Apple won't be listing "Apple's First Patent Claim" to each of the key granted patents that we cover weekly.