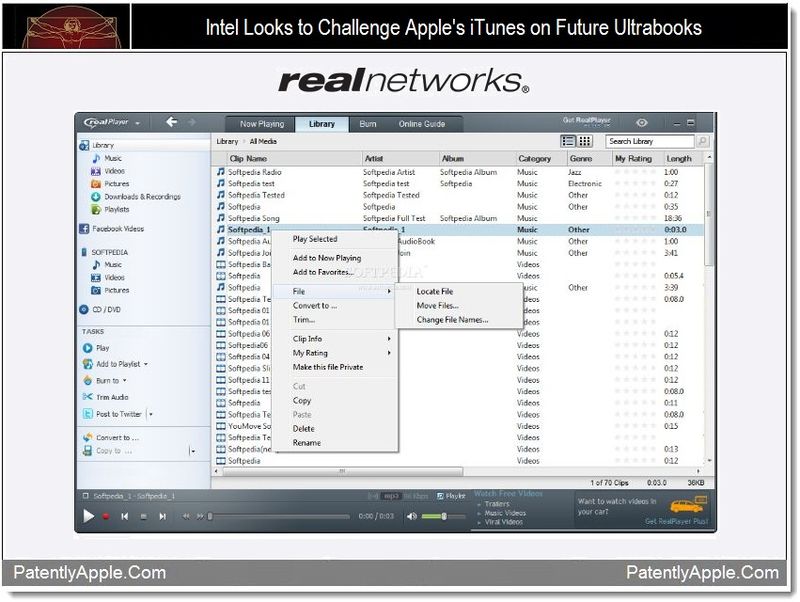 With Apple having snubbed Intel's every offer to win them over to their mobile processors, Intel is deadly focused on challenging Apple's MacBook Air and eventually their iPhone and beyond. In 2013, Intel will be introducing the Haswell processor that will allow Intel's Ultrabook to offer a very smart ultrathin notebook-tablet form factor that will be able to challenge Apple's mobile platform. Yesterday, Intel showed how they're ramping up on the software side of the Ultrabook by signing an agreement with RealNetworks to purchase approximately 190 patents and 170 patent applications worldwide, as well as next-generation video codec software, for $120 million. As part of the agreement, Intel will acquire RealNetworks' foundational streaming media patents, expanding Intel's diverse and extensive portfolio of intellectual property. Translation: We're going to challenge Apple's iTunes on Ultrabooks and beyond in the very near future.

"RealNetworks, Inc. today announced that it has signed an agreement to sell a significant number of its patents and its next generation video codec software to Intel Corporation for a purchase price of $120 million. Under terms of the sale, RealNetworks retains certain rights to continue to use the patents in current and future products.

"Selling these patents to Intel unlocks some of the substantial and unrealized value of RealNetworks assets," said Thomas Nielsen, RealNetworks President and CEO. "It represents an extraordinary opportunity for us to generate additional capital to boost investments in new businesses and markets while still protecting our existing business.

"RealNetworks is pleased Intel has agreed to acquire our next generation video codec software and team," said Nielsen. "Intel has a strong reputation as a technology innovator, and we believe they are well positioned to build on the development work and investment we've made in this area."

"As the technology industry evolves towards an experience-centric model, users are demanding more media and graphics capabilities in their computing devices. The acquisition of these foundational media patents, additional patents and video codec software expands Intel's diverse and extensive portfolio of intellectual property," said Renée James, Intel senior vice president and general manager of the Software and Services Group. "We believe this agreement enhances our ability to continue to offer richer experiences and innovative solutions to end users across a wide spectrum of devices, including through Ultrabook devices, smartphones and digital media."

Many have tried to challenge Apple's iTunes in the past and all have failed – miserably I might add. But it's clear that Intel intends to continually enhance Ultrabook in an attempt to at least stem Apple's never ending market inertia over time. Will they succeed? Only time will tell.

I reckon the $300 million that Intel is earning in profit is being used to subsidize non-Apple vendors to create MacBook Air clones...

Apple is using ARM processors for their mobile products.

Intel is trying to compete with ARM and vice versa

Intel has invested / developed streaming media and mobil designs before and failed! There is no sign that buying some patents from long time failure Real Networks does anything other than possibly create patent troll opportunities for Intel - something they are not likely to do as it is bad to sue your customers.

It almost seems that Intel suddenly wants to take down Apple.

@ Mat. True, but what if Intel redesigns the entire interface? The underlying patents are to defend Intel's future music player from any Apple legal challenge. But the design, could be new, fresh and appealing. I'm just saying that I doubt that Intel is going to "copy" realnetworks interface knowing it didn't fair well. Whoever can challenge iTunes with a real alternative could bring Apple down from it's current market strangling position. Intel seems intent on being the one to accomodate that challenge. I think that many in the industry are cheering Intel on.

It's been a few years since I last used RealPlayer... but from what I remember, iTunes has nothing to worry about =)