The Race is on for Next Generation Fuel Cell Powered Devices 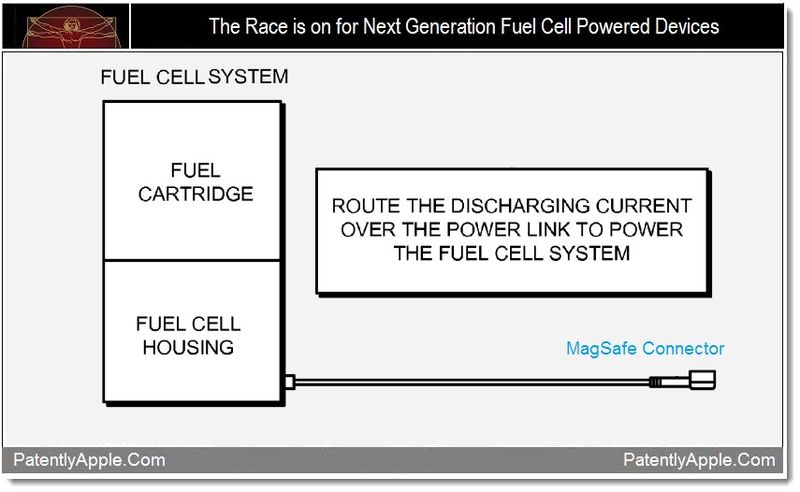 On December 22, 2011, the US Patent & Trademark Office published a pair of patent applications from Apple that reveal greater detailing of their next generation Fuel Cell project. The new fuel cells will one day power both iOS and OS X portable devices like the iPhone and MacBook for days, if not weeks at a time. In October we covered Apple's first patent on fuel cell technology in respect to fuel cell plates. Today's patents provide us with greater detail of their fuel cell technology project that even considers implementing MagSafe as a key connector for fuel cell recharging between an iOS device like the iPhone and a MacBook. The race is on to bring next generation fuel cell technology to future portable devices and it appears that Apple may be on the verge of a major breakthrough on this front.

Apple's patent overview starts off by stating that the US is reliant on fossil fuels which has forced the government to maintain complicated political and military relationships with unstable governments in the Middle East, and has also exposed our coastlines and our citizens to the associated hazards of offshore drilling. These problems have led to an increasing awareness and desire on the part of consumers to promote and use renewable energy sources.

As a consequence of this increased consumer awareness, electronics manufacturers have become very interested in developing renewable energy sources for their products, and they have been exploring a number of promising renewable energy sources such as the hydrogen fuel which is used in hydrogen fuel cells. Hydrogen fuel cells have a number of advantages. Such fuel cells and associated fuels can potentially achieve high volumetric and gravimetric energy densities, which could potentially enable continued operation of portable electronic devices for days or even weeks without refueling. However, it is extremely challenging to design hydrogen fuel cell systems which are sufficiently portable and cost-effective to be used with portable electronic devices.

A Future Fuel Cell System for iOS Devices and the MacBook 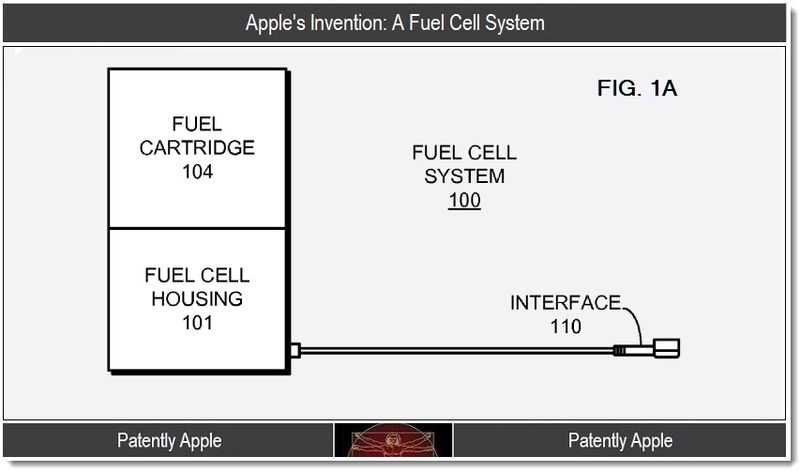 In Apple's patent FIG. 1B shown below they illustrate some of the internal structures of the fuel cell system 100 noted above in FIG. 1A. More specifically, the fuel cell system includes a fuel cell stack 102 which produces electrical power by converting a source fuel, such as hydrogen or a hydrocarbon, into an electric current and a waste product.

The fuel cell stack comprises a stack of fuel cells, wherein each a fuel cell contains an anode, a cathode, and an electrolyte between the anode and cathode. Electricity may be generated by two chemical reactions within the fuel cell. First, a catalyst at the anode oxidizes the fuel to produce positively charged ions and negatively charged electrons. The electrolyte may allow ions from the oxidation process to pass through to the cathode while blocking passage of the electrons. The electrons may thus be used to drive a load connected to the fuel cell before recombining with the ions and a negatively charged atom (e.g., oxygen) at the cathode to form a waste product such as carbon dioxide and/or water. 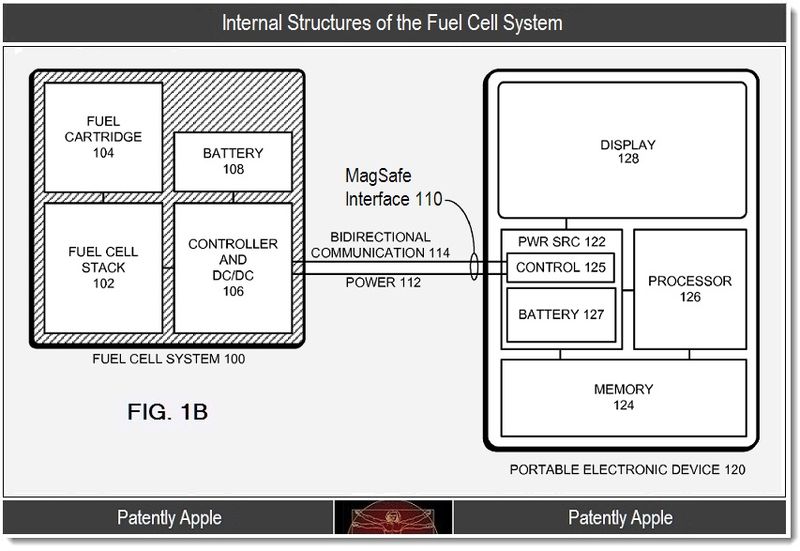 The fuel cells within the fuel cell stack may include electrochemical cells that convert a source fuel into electric current and a waste product. For example, the fuel cells may be proton exchange membrane (PEM) fuel cells that use hydrogen as a fuel. The hydrogen may be catalytically split into protons and electrons at the anode of each PEM fuel cell. The protons may pass through an electrically insulating membrane electrode assembly (MEA) to the cathode of the PEM fuel cell, while the electrons may travel through a load to the cathode. The protons and electrons may then react with oxygen atoms at the cathode to form water molecules as a waste product.

Power from the fuel cell stack feeds into circuitry 106 that performs control functions and performs direct-current (DC)-to-DC conversion operations before the power feeds through the MagSafe connector to power portable electronic device 120. The power could also be directed to an internal rechargeable battery 108, which is configured to store excess power generated by fuel cell stack 102.

Daisy-Chained and/or Operate as a Standalone Device 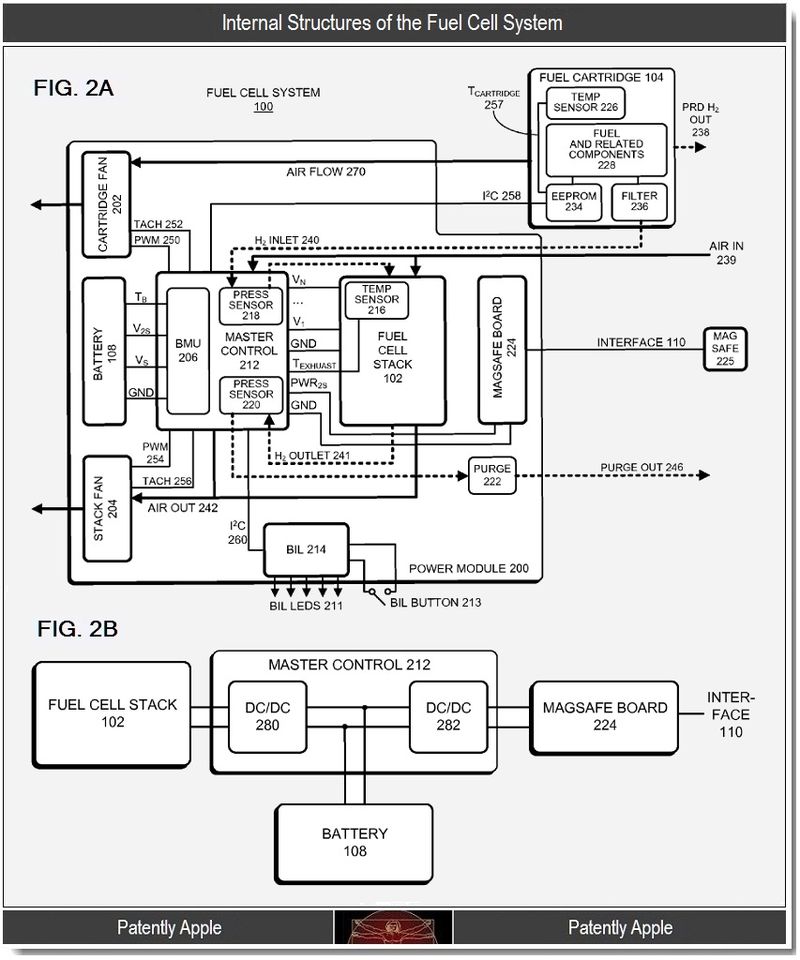 Apple's patent FIG. 2A illustrates details more of the internal structure of a fuel cell system; patent FIG. 2B illustrates how the fuel cell system could use two DC/DC converters. During operation, the master control board (212) receives power from the fuel cell stack and converts the power using a first DC/DC converter 280 into a battery voltage which is suitable for charging the internal battery. Next, a second DC/DC converter 282 converts the battery voltage into a voltage suitable for powering a portable electronic device, and this voltage is fed into the MagSafe board 224, which feeds the power to the portable computing device through the MagSafe interface. Obviously MagSafe is Apple's preferred interface but do state that USB could be used. 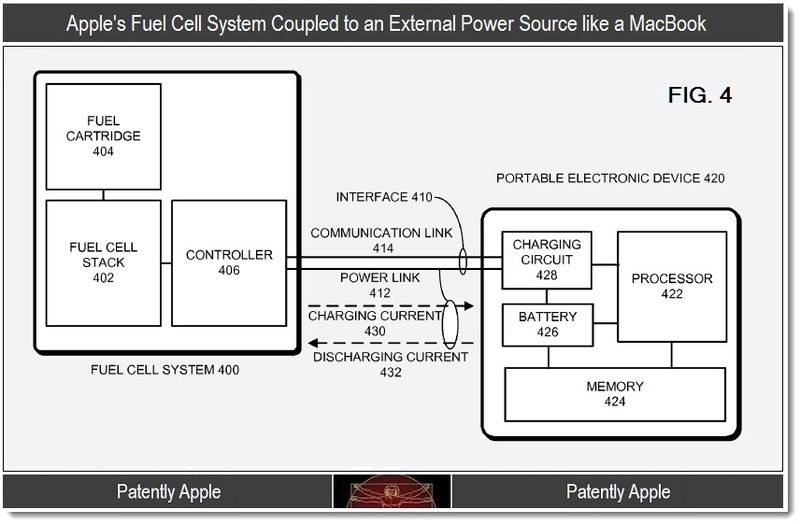 Note that, because the capacity of a rechargeable battery of an external electronic device (e.g., a laptop) could be sufficiently large, regulating a fuel cell operating parameter by directly charging an external battery with the fuel cell allows the control process to be highly reliable.

Apple's patent FIG. 5 shown below presents a flow chart illustrating how a fuel cell system could use an external rechargeable battery on a portable electronic device to maintain hydrogen pressure around a set-point. 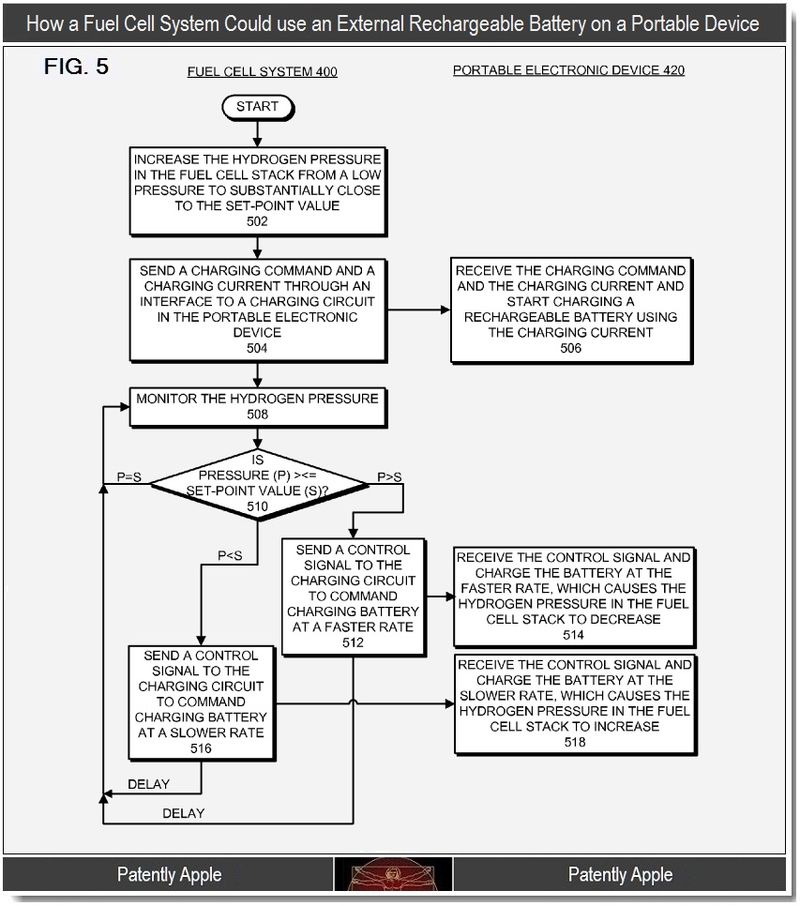 Both of Apple's patent applications were originally filed in Q3 2010 by inventors Vijay Iyer and Bradley Spare. Apple's second patent on this topic covered the same territory but put emphasis on the new fuel cell system also being cost-effective.

For those of you who are interested in knowing every technical detail about Apple’s Magic TrackPad, you’re in luck. Two of Apple’s detailed patent applications have been published today for your review. 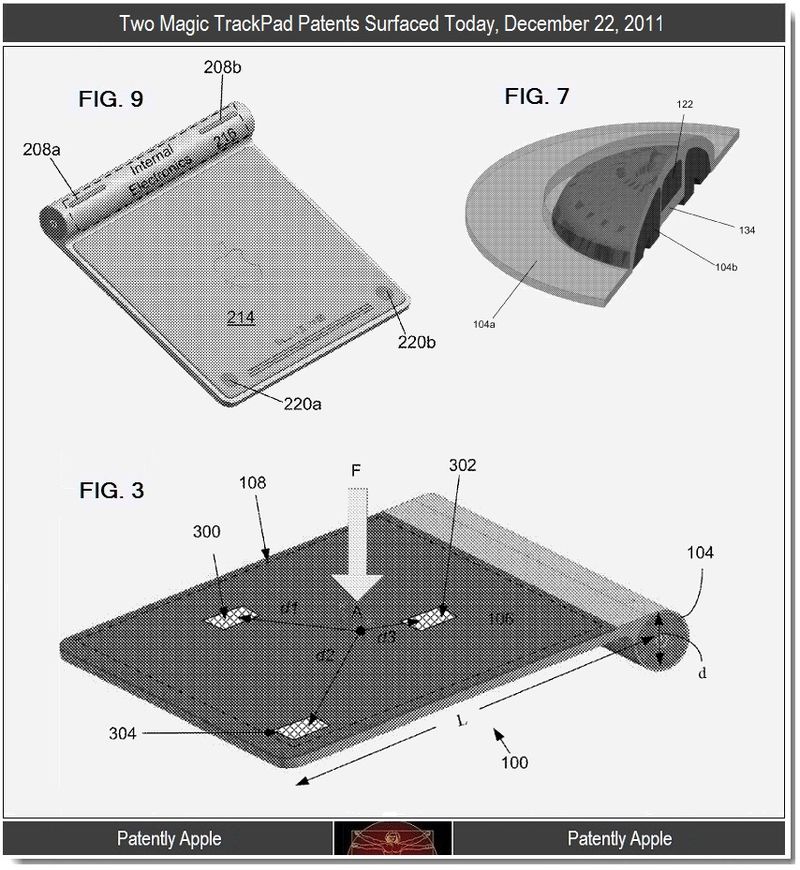