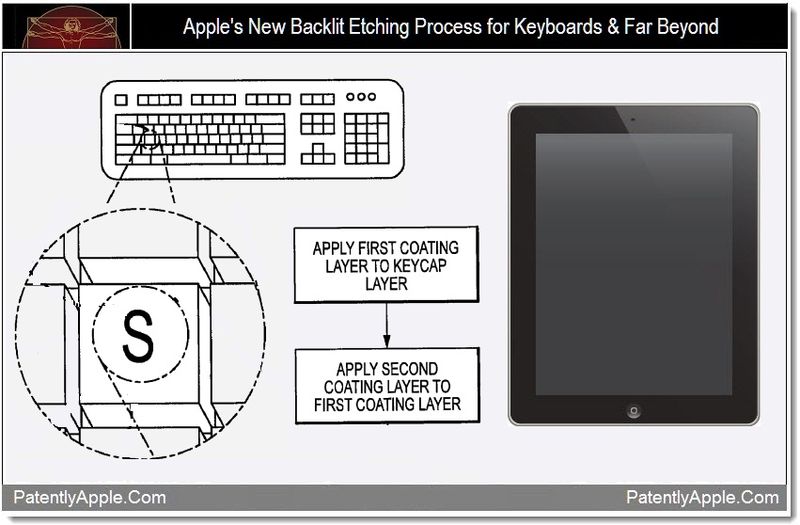 Apple's design and engineering teams have come up with a new way of creating and manufacturing backlit keyboards using a variety of lasers including ultraviolet laser, a green laser, a YAG laser and others depending on the desired size and shape of the graphic that Apple is trying to achieve. The process of creating the right effect will also employ the use of exotic paints such as titanium dioxide-loaded paint, a latex-based paint, a rubber-based paint, a plastic paint, and so on. While Apple illustrates that the new backlit etchings could be used in creating a future desktop keyboard, they also make it clear that the process could be used to create designs, logos, borders and more on iOS devices, televisions, mice, home electronics and far beyond. I'm sure that this process could be used in creating a very cool TV remote – but that's a story for another day.

Electronic devices are ubiquitous in society and could be found in everything from household appliances to computers. Many electronic devices include graphics that are etched onto the outermost surface of these devices. The graphics could be used for various purposes, and may take the form of any design or shape, including text, symbols, decorative patterns, and so on. In some cases, the graphics may be selectively or fully backlit. One example of such a graphic is the legend that is etched onto the keycap of a keyboard.

While providing attractive backlit graphics for a user is very important in many electronic devices, much of the aesthetic appeal of a device could quickly be compromised if a graphic does not transmit enough light to be adequately perceived by a user. The aesthetic appeal of a device may also be diminished if the graphic is not sufficiently contrasted with the unetched surfaces of the device, which may make a graphic difficult to discern.

While many designs for etching graphics onto the surfaces of electronic and personal devices have generally worked well in the past, there is always a desire to provide new and improved designs or techniques that result in even more aesthetically pleasing graphics. In particular, the ability to provide backlit graphics on electronic and personal devices in a manner that could generate a sufficient amount of light and provide contrast with the unetched surfaces of the device is desirable.

Apple's invention generally relates to new methods for etching graphics onto backlit surfaces, such as keycaps. The keycaps may include a fully or partially transparent keycap layer that may be covered by multiple coating layers. The keycap may be etched to remove the top or outermost coating layer and expose the second or middle layer. The second or middle layer may be etched to different depths so that when illuminated, the etched portion having a larger depth may transmit more light than the etched portion having a smaller depth.

A further embodiment may take the form of a keyboard including at least one key including a keycap and a light source configured to illuminate the keycap. The keycap may include a keycap layer, a first coating layer adjacent the keycap layer, and a second coating layer adjacent the first coating layer. At least a portion of the keycap may define a graphic and a border. The graphic may have a first depth and the border may surround a perimeter of the graphic and have a second depth larger than the first depth. 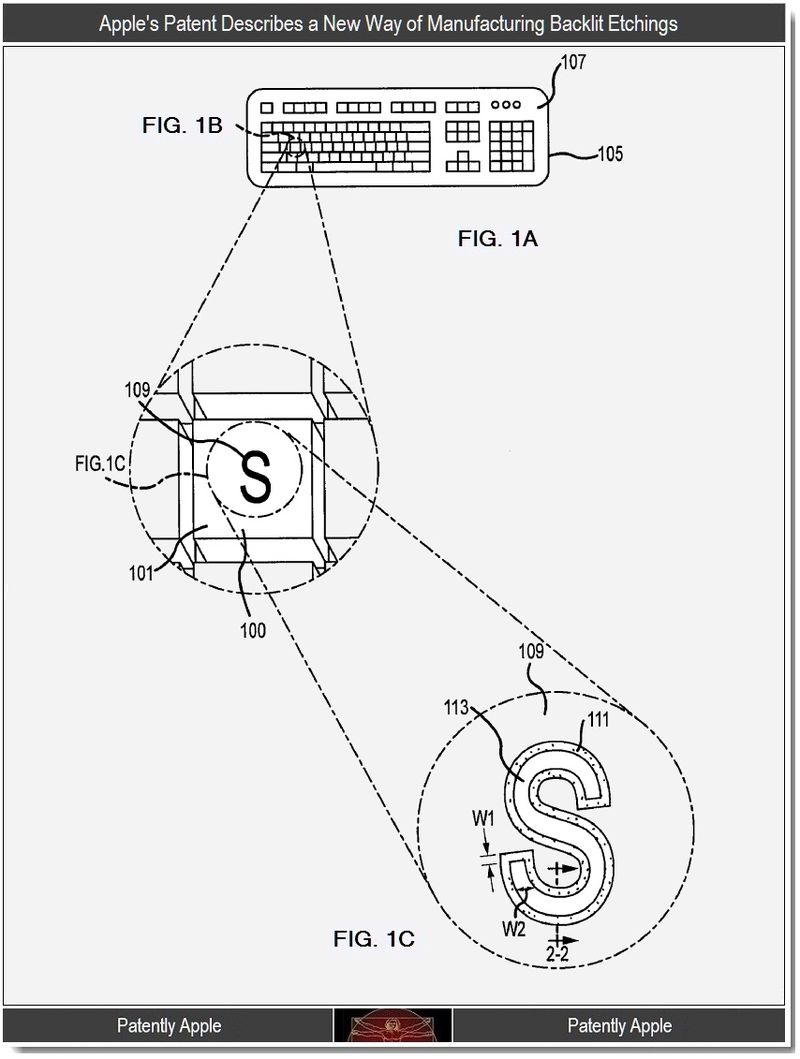 In the case of the keyboard, we see that Apple is considering a backlit keyboard for the iMac. More importantly, the patent goes on to point out future applications for this new kind of backlit etching that go beyond just keyboards.

According to Apple, other embodiments could be used to form graphic and/or borders on other surfaces. For example, certain embodiments may be used to form the exterior surface of a housing for an electronic device, such as a mobile telephone, a laptop or notebook computer, a tablet computing device, a desktop computer, a television, a stereo receiver, or practically any other electronic device.

Alternate embodiments may not be electronics housings at all, but instead may be any number of objects typically formed from metals or plastics. For example, certain embodiments may be formed as described herein to create serving utensils or dishes, signs, advertisements and the like.

Additionally, Apple notes that while the patent generally discusses etching in the context of keycaps and/or keys on a keyboard, it should be understood that the techniques, methods, operations and the like described herein may be applied to a number of different apparatuses. For example, a logo on the exterior of an electronics housing may be etched in the fashion described herein, as may portions of a trackpad, touchpad, mouse or other input (or output) device. 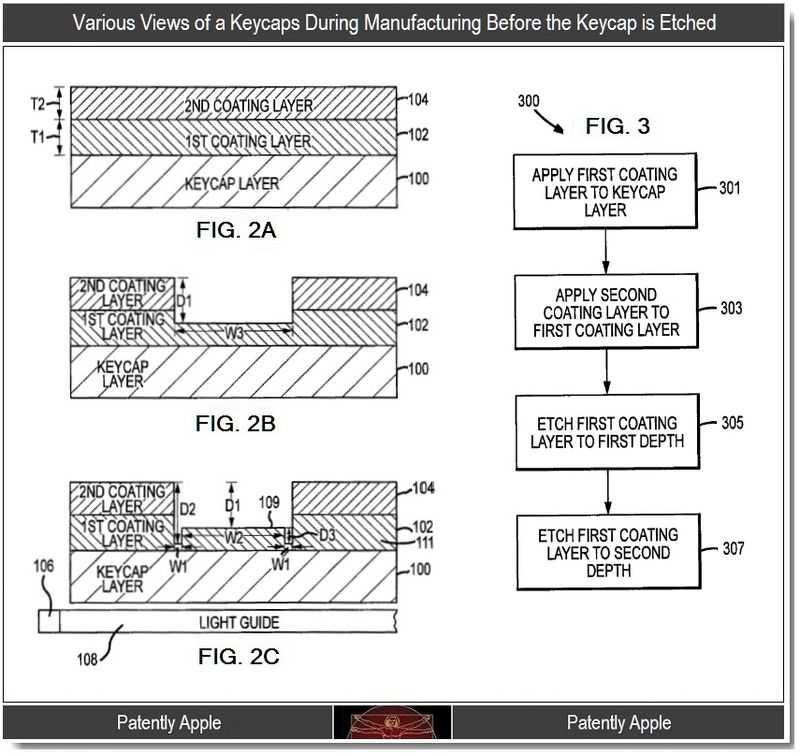 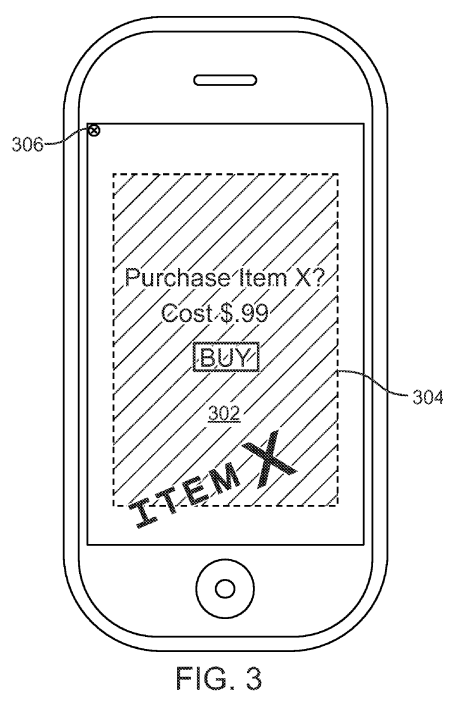 Posted by Jack Purcher on December 15, 2011 at 10:32 AM in 1A. Patent Applications, Apple Accessories, Materials, Processes | Permalink | Comments (0)