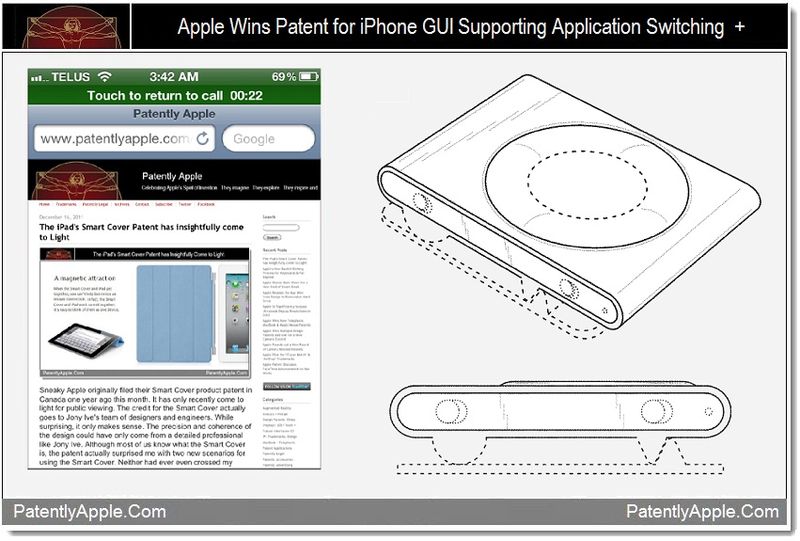 The US Patent and Trademark Office officially published a series of eight newly granted patents for Apple Inc. today. This morning's report mainly focuses in on two of these patents. The first one focuses in on one of Apple's original iPhone patents that relate to the user interface supporting application switching while still on a call. The second patent noted in our report covers a design win for Apple's second generation iPod shuffle which credits Steve Jobs as one of the designers. In our report's Final Round-Up section, you'll find patents relating to such topics as a developer computer for testing out iPhone apps and another one covering Apple's microperforated backlit display system which produces the illuminated Apple logo found on today's MacBook lineup.

Apple has received a Granted Patent that relates to the iPhone allowing a user to start another application while the user is continuing a phone call. 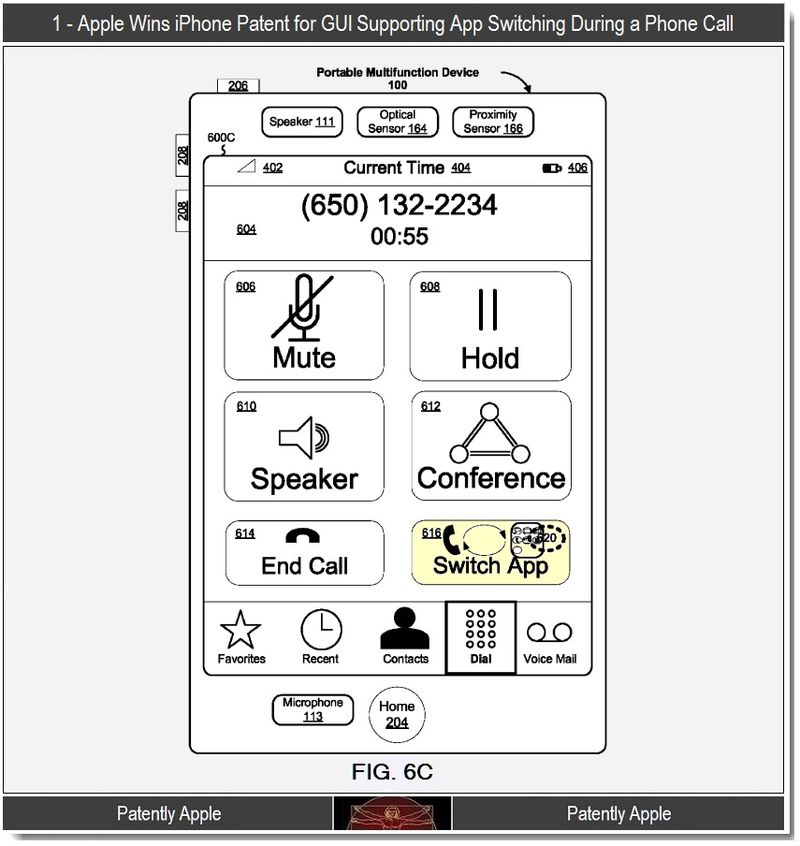 In some embodiments, the phone call user interface (UI 600C, FIG. 6C) includes an application switch icon 616. The user could return to the original phone application menu by finger tapping (620) the application switch icon (616). This particular iPhone feature has likely been replaced with Apple's new multitasking bar capabilities that appear at the bottom of the iPhone when the user double taps the home button.

Apple's patent FIG. 10C, shown below, illustrates the switch icon 3080 appearing on the user interface during an ongoing phone call. This is juxtaposed to a current iPhone screenshot illustrating that same icon as the patent (shown in green). The switch application icon is a visual cue for the user. When a user activates this switch application icon by touching it with their finger, the iPhone replaces the menu of application icons with the controlling iPhone GUI. 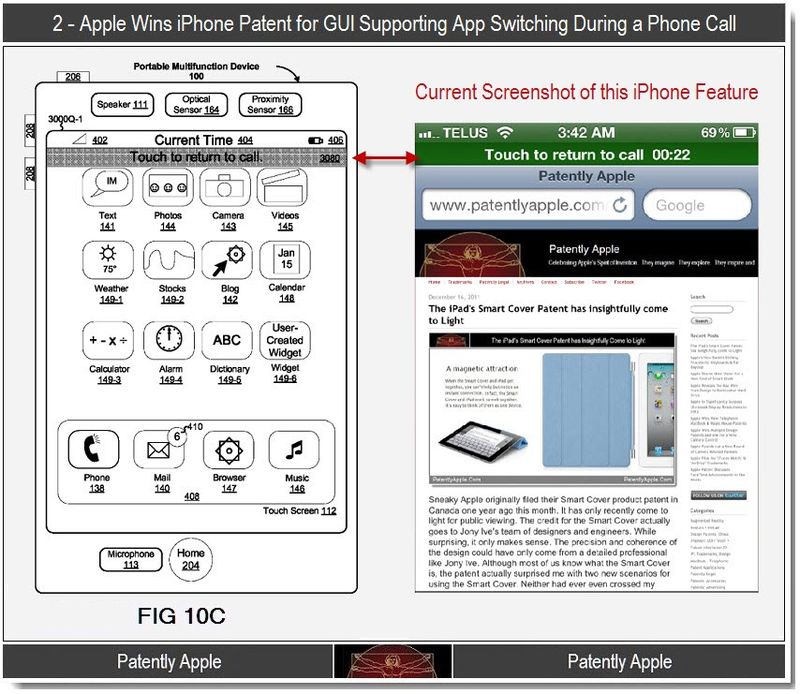 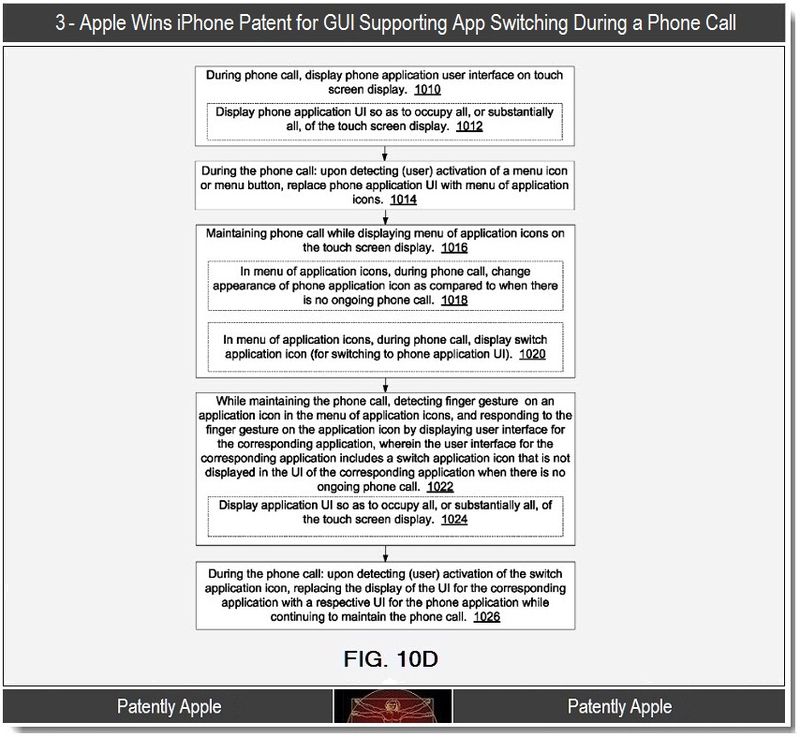 The US Patent and Trademark Office have officially granted Apple a design patent today for their second generation iPod Shuffle which lists Steve Jobs as one of the designers. 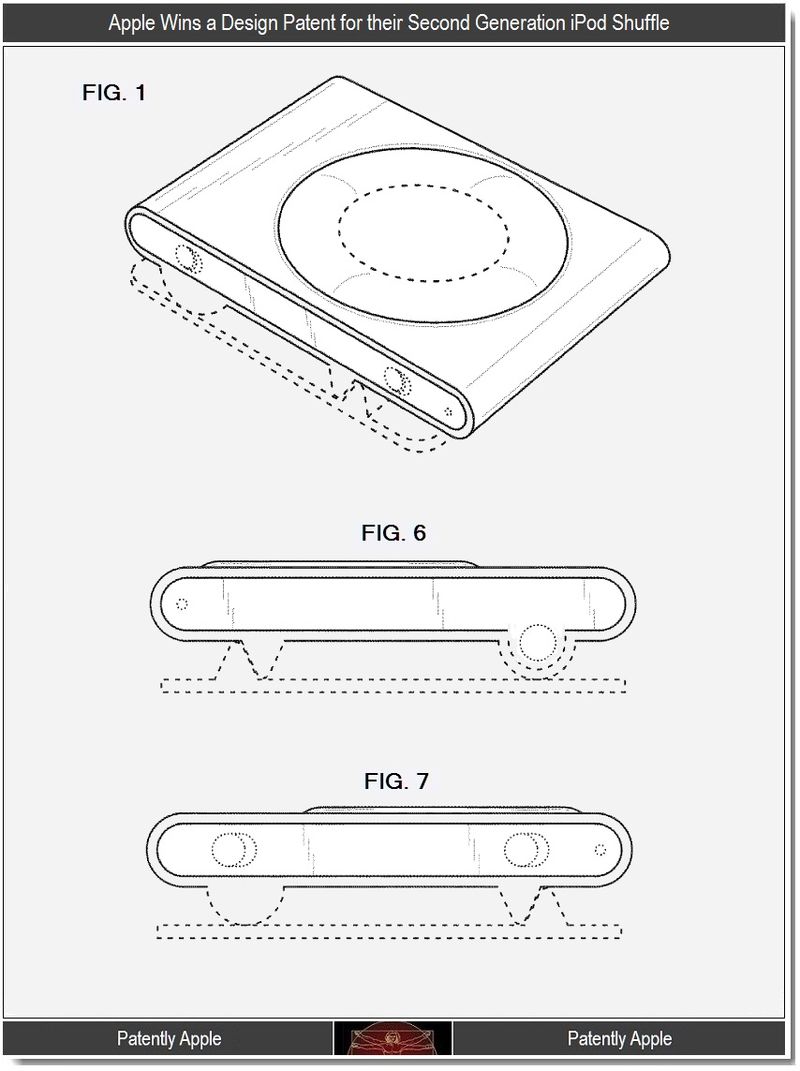 The broken lines in the noted patent Figures show portions of the media device which form no part of the claimed design. Apple won a patent for their fourth generation iPod shuffle last month.

Patent 8,082,376 - Communication between an accessory and a media player with multiple protocol versions; Patent 8,082,319 - Publishing and subscribing to digital image feeds; Patents 8,081,954 and 8,081,956 titled "System and method for determining mobile device capabilities," relate to iAd; Patent 8,081,430 entitled "Microperforated and backlit displays having alternative display capabilities, " relates to Apple's June Granted Patent entitled "Invisible, Light-Transmissive Display System; and finally, patent 8,081,930 entitled "Trace functionality in a mobile device," covers a developer computer for testing the response of a mobile device that is linked to and unlinked from another device. 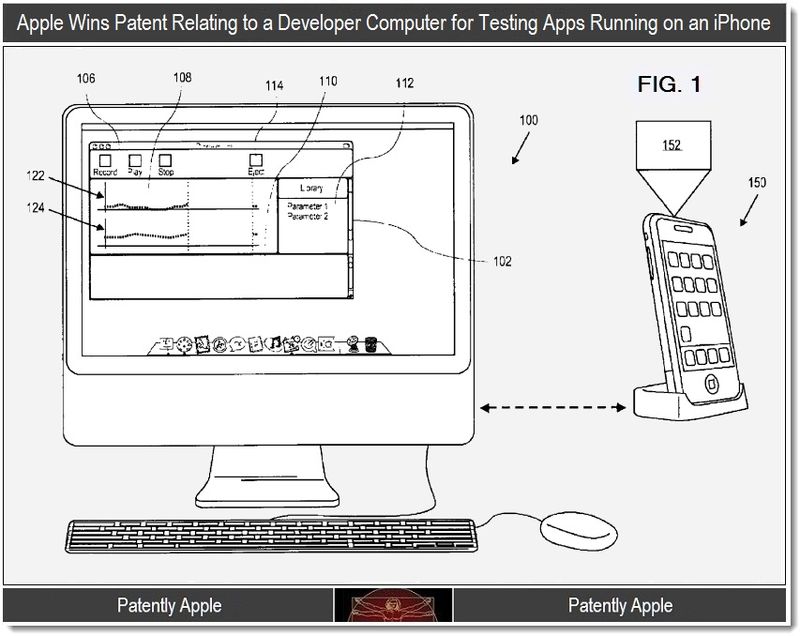