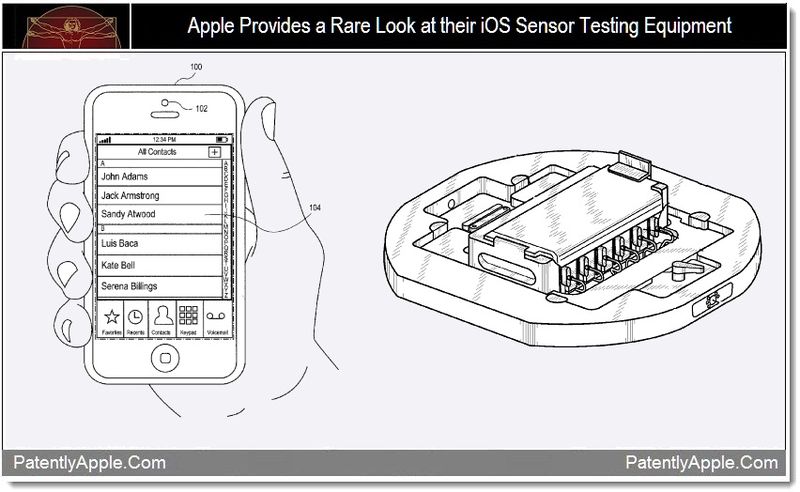 Just a few weeks ago we posted a special report that was all about Apple's secretive yet Magical Design Studio. In that report we also covered Ive's new toy that would assist Apple's design team in prototyping complicated wireless antenna-sets. If that wasn't enough, today we're treated to a little more of that behind-the-scenes magic. This time, we're able to review two of Apple's latest inventions that relate to testing sophisticated sensor-sets that go into every iOS device before shipping. The sensor-set includes accelerometers, multi-axis motion sensors, gyroscopes and many more. The new testing equipment carefully analyzes these sensors to ensure that they leave the factory properly calibrated. It's rare that we get a glimpse into how Apple manufactures their products, but the detailing of these new inventions does just that.

Apple's states that in an effort to ensure the accuracy of sensors integrated within portable electronic devices, manufactures perform numerous tests of the sensors prior to releasing the devices to retailers. In a traditional method and system for testing a sensor integrated within a device under test (DUT), the DUT is placed on a conveyor belt and fed through a variety of areas or zones. Each zone or area presents a different testing scenario or environment by which the accuracy of the sensor within the DUT is tested.

In each scenario, the sensor produces values corresponding to the given environment and these values are then stored. The stored values are then subsequently accessed and analyzed by dedicated test equipment to determine the accuracy of the sensor. Since various scenarios are being tested in succession, the times at which the DUT enters and exits each area or zone needs to be determined in order to ensure that the correct reference values are compared against the appropriate sensed data.

To lessen the amount of time that it takes to test a device under test (DUT), an embodiment of Apple's invention is directed to a system and method for conveying a DUT through a plurality of test areas in an unsynchronized manner.

In Apple's Patent FIG. 2 illustrated below we see a diagram of a data collection fixture for testing sensors of a device under test (DUT), which includes a multi-zone testing frame; FIG. 3 shows one embodiment of a testing frame with a top cover removed. 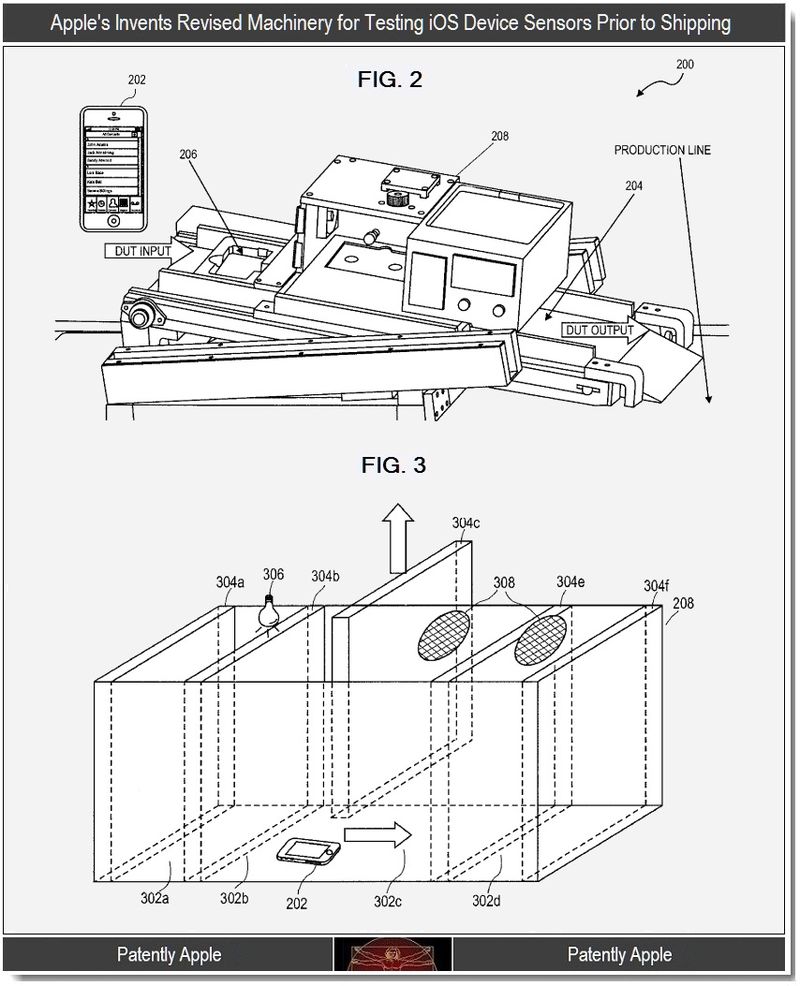 Apple's patent application 20110301885 was originally filed in Q2 2010 by inventors John Tam, Bridget Wu and Ryan Du Bois. Our cover graphic with the hand and iPhone is from this patent application: Patent FIG. 1 is a top view of a portable electronic device containing proximity and ambient light sensor mechanisms to be tested.

Equipment for Calibrating a Three-Axis Motion Sensor in iOS Devices

As still another example, devices could include one or more sensors that could capture information about the environment of a device or the position of the device in the environment. Such sensors could include, for example, a proximity sensor, an ambient light sensor, an infrared sensor, a multi-axis motion sensor (e.g., an inertial measurement unit such as a gyroscope or accelerometer), or combinations of these. 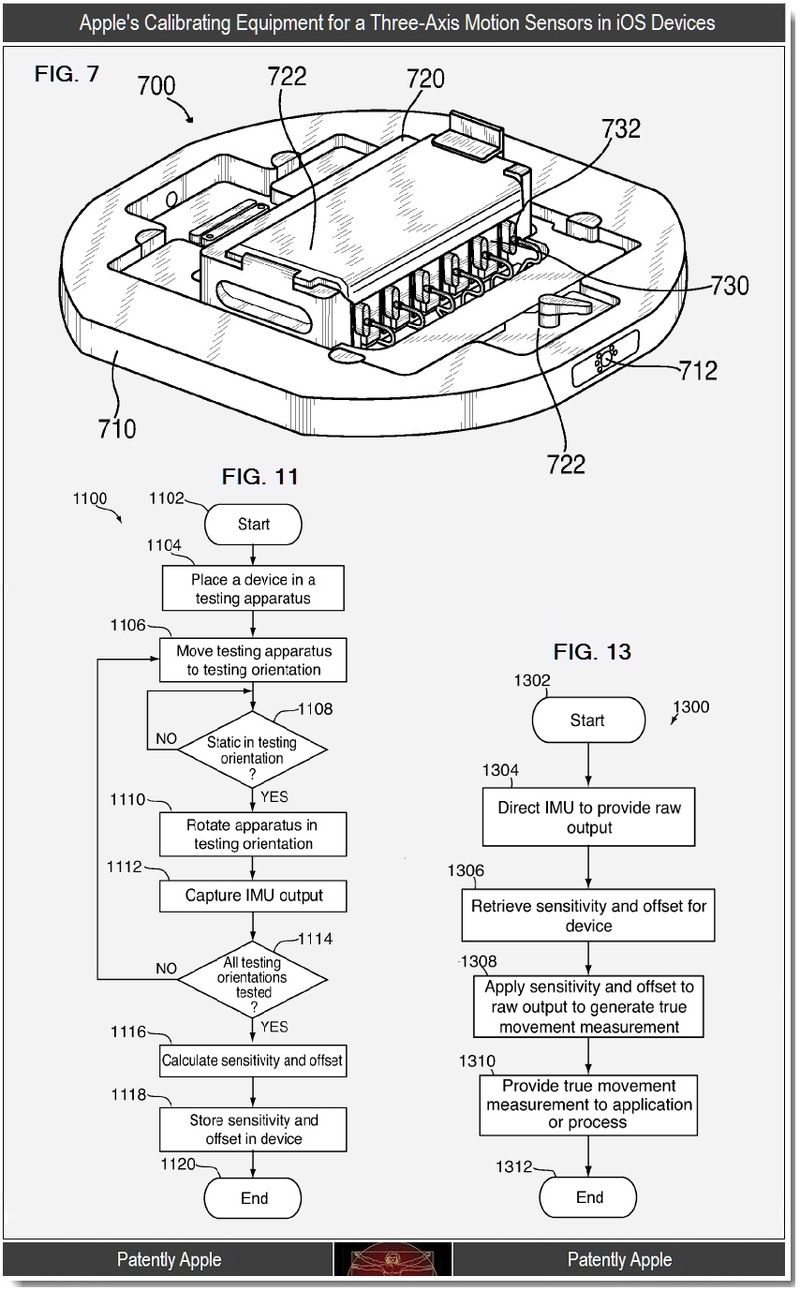 Apple states that an electronic device could include a commercial IMU that has limited accuracy. In particular, the IMU could be constructed such that the reference frame of the IMU is not perfectly orthogonal. In some applications, however, the electronic device could require a more accurate IMU output. To ensure that the IMU output corresponds to the device reference frame, the device could be placed in a testing apparatus and calibrated.

The testing apparatus could include a fixture having several slots for receiving electronic devices. The slots could be substantially parallel such that each device placed in the slots is in substantially the same reference frame. Each electronic device could be retained in a slot by a rubber extension that contacts the devices when the fixture is closed (e.g., when a lid is placed over the devices). In some embodiments, the fixture could include a more precise IMU aligned with the slots in the fixture to provide a real-time accurate or true IMU output when the fixture moves.