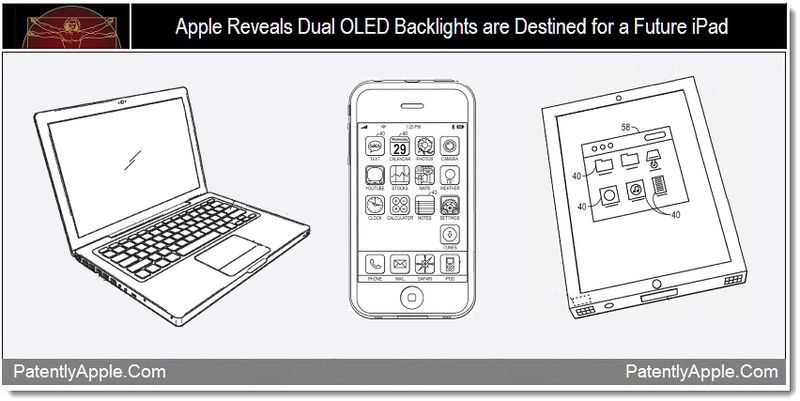 On November 10, 2011, the US Patent & Trademark Office published a patent application from Apple that may reveal some of the changes coming to the iPad 3's backlighting system. This past Monday we learned that Apple is likely to modify LED back-light solutions for next-generation iPads. Today's patent may provide us with a more in-depth peek into where these modifications may be going. Some think that the iPad launching in Q1 2012 is really just a stepping stone to the iPad 3 that's destined for a Q4 2012 release. Something like what the iPhone 4S is to the iPhone 5. In today's patent, Apple discusses the use of one or two OLED backlighting units in a future iPad. Down the road, other devices adopting multiple OLED backlights may include such devices as the Cinema Display, MacBook Air and - if we hold our breath long enough, maybe an HDTV. For now however, the focus is definitely on a future version of the iPad.

The Problem with Today's Light Source Designs for Thin Devices

LCD devices generally include a light source, as liquid crystal materials themselves do not emit light. A typical light source, also referred to as a backlight, may include light sources along one or more edges which emit light into light guide panels (LGPs) which guide the light across the display area. To increase the uniformity and brightness over the display area, a typical LCD device may also include brightness enhancement film (BEF) layers which reflect and enhance the light. However, such efforts to increase uniformity and/or brightness may also increase the thickness and complexity of the backlight and the LCD device. Furthermore, the different films and parts of an LCD having a LED backlight may be susceptible to contamination.

Apple's patent generally relates to a liquid crystal display (LCD) device having an organic light emitting diode (OLED) backlight. In one embodiment, an OLED backlight may include one or more OLED pixels disposed between two glass substrates. The OLED backlight may be optically bonded to the back of an LCD, which may prevent contamination between the LCD and the OLED backlight and increase the mechanical rigidity of the display device.

One or More OLED Backlight Elements

Apple states that using OLED backlighting may be coming to Apple's Cinema Display, MacBooks and iOS devices such as the iPhone and iPad. Apple's patent FIG. 4 depicts a tablet-style form factor such as the iPad. Eventually it would be available for the iMac. 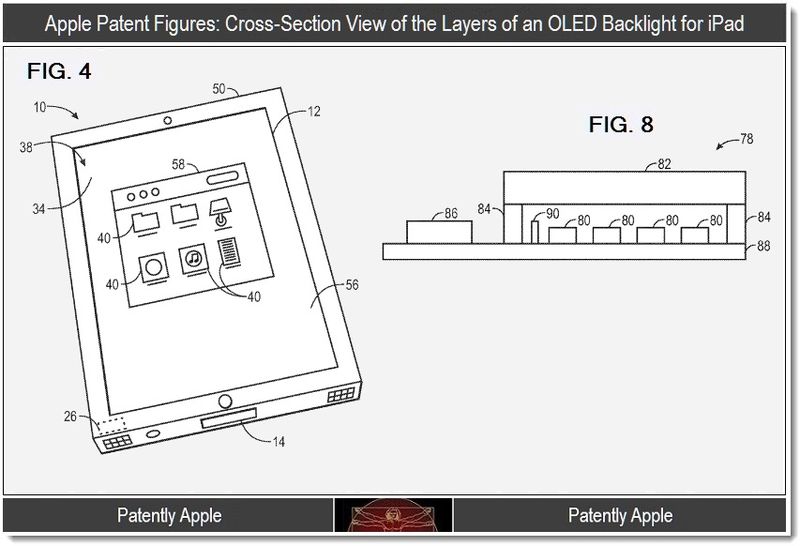 Apple's patent FIG. 8 noted above is that of a cross-sectional view of the layers which may be present in an OLED backlight.

Apple's patent background mentions television in passing, though the shift to OLED TV's is in the making at this very moment. While some think that OLED's may take another three or four years to come to market, you may want to rethink that position. DuPont has a new technology and process for AMOLED that could mark a breakthrough for TVs. A press release was issued last week.

"AMOLED televisions clearly represent the future. They are preferred by consumers for their superior performance, they are more energy efficient and the process technology we're licensing allows them to be manufactured much more cost effectively," said David B. Miller, president, DuPont Electronics & Communications. "We look forward to helping make the promise of AMOLED television a commercial reality at a price point that is within reach for the mass consumer market."

It's already been licensed to a mysterious Asian AMOLED manufacturer. It may not relate to Apple just yet, but you never know.

For now however, the focus of the patent is definitely on a next generation iPad.