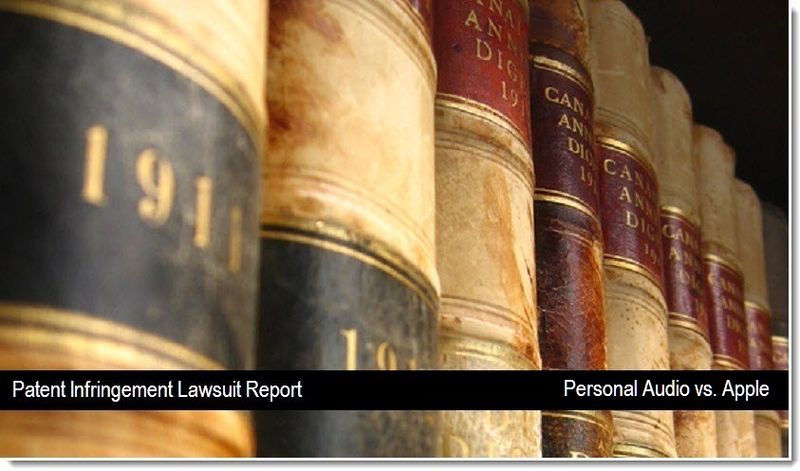 Personal Audio LLC of Texas who won a case against Apple on one patent front this past July  is back in court with a new filing. The jury in the first trial sided with Personal Audio against Apple, but a post trial judgment ruled against their second key patent. Personal Audio is back with a vengeance to prove that their second patent was indeed infringed by Apple by pointing to iOS and Apple's own marketing regarding playlists for which they have no patents for, states the company. The lawsuit drags in the new iPhone 4S, iPod touch and the iOS 5 operating system which was just released. This is a very long and detailed report that goes into some of the history of this case and presents some fascinating details brought up in court testimony. If you're a legal buff or professional, it's definitely an interesting weekend read. Updated

An Overview of the Initial Case Won by Personal Audio 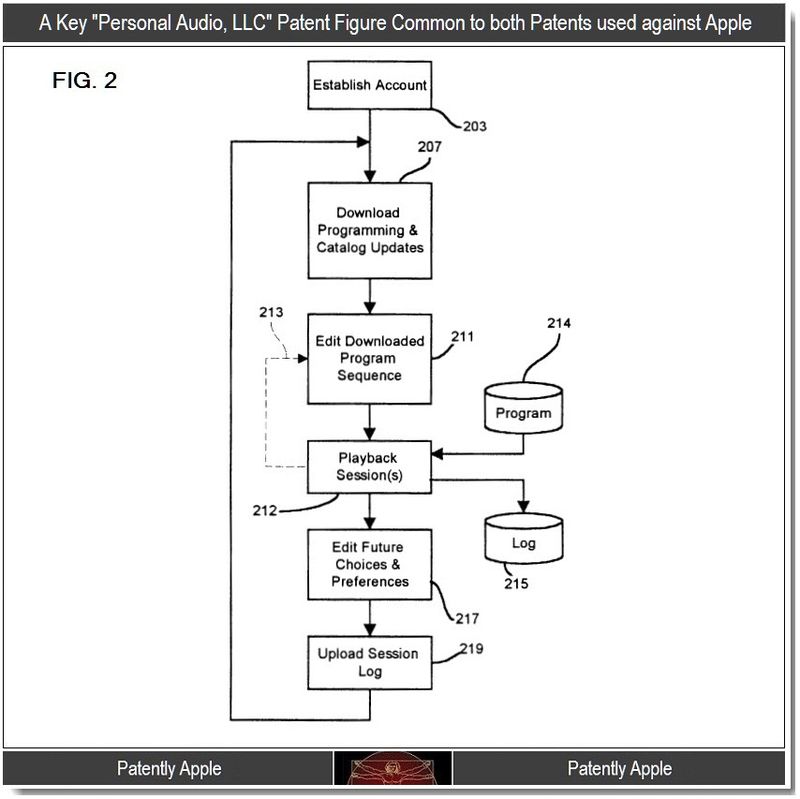 The Ruling that Personal Audio Didn't Agree with

The court documents states that "Over Personal Audio's objection, the Court has interpreted the jury's lump-sum royalty award on the '076 patent as a "fully paid up license for all past and future sales of Apple products that incorporate the patented technology." The Court also stayed a second lawsuit Personal Audio filed, Personal Audio, LLC v. Apple Inc., Case Number 9:11-CV-00120-RC, in which Personal Audio asserts that different Apple products—including iPod nano generation 6, iPhone 4, and iPad 2—infringe the '076 patent. Even under the Court's reasoning, however, the purported license can only apply to the '076 patent. A jury cannot award damages on a patent that is not infringed, such as the '178 patent.

According to Personal Audio's documented legal Complaint against Apple, they state that "Apple therefore does not have a license, actual or implied, to use the technology claimed in the '178 patent."

The complaint goes on to state that "On October 12, 2011, Apple released its new iOS 5 operating system. iOS 5 is compatible with various generations of the iPod touch, iPhone, and iPad devices that Apple sells or previously sold to its customers. On October 14, 2011, Apple began offering for sale and selling the iPhone 4S, specifically loaded with iOS 5. The iOS 5 operating system includes a new data transmission feature—Wi-Fi Sync—that provides Apple devices loaded with iOS 5 with the capability to synchronize content with an iTunes computer over a wireless network. An Apple device will send a request to initiate the synchronization over the wireless network. The device will synchronize audio files, playlists, and other data with a server computer running iTunes. The Wi-Fi Sync feature allows an iPod touch, iPhone, or iPad running iOS 5 to download audio program files and a sequencing file from a server computer upon a request from the player. These devices no longer need to attach to a server computer running iTunes with a USB cable for day-to-day syncing."

The remainder of Apple's defenses were either withdrawn or dismissed by the Court. Apple withdrew its equitable estoppel defense in December 2010. Apple withdrew its prosecution laches and most of its inequitable conduct allegations on July 4, 2011. At trial, the Court held as a matter of law that Apple failed to establish its written description and marking defenses. The Court also found that Apple abandoned its enablement and best mode defenses. The Court held that Apple failed to establish inequitable conduct.

But the burden was still on Personal Audio, and basically what Dr. Almeroth said was – and the evidence basically was the UBS [sic] system or cable protocol says "here I am." And "here I am" is not a request for – to initiate the transfer. . . . So based on how that is – the claims are set out, I am going to grant that JMOL on that.

So, with the jury siding with Personal Audio, LLC but the court ruling against them in post-trial, Personal Audio is now back in court once again to further their case against Apple in respect to patent '178.

Personal Audio begins with the fact that "Apple did not start work on the iPod line of products until 2001. This was over four years after the inventors on the '178 patent filed the patent application to which the '178 patent claims priority.

Steve Jobs, Apple's former CEO, recognized the importance of downloadable navigable playlists. Mr. Jobs publicly stated that "nobody thinks of albums anymore, anyway. People think of playlists and mixes. We'll still sell albums as artists put them out, but for most consumers of popular music, we think they'll more likely buy single tracks that they like. And then they'll organize them into customized playlists in their computers and on their iPods."

According to Personal Audio's complaint, "Apple has stressed the importance of iPod functionality, and of playlists in particular, to the iPhone. In a national television advertising campaign, Apple stated:

Personal Audio brought their complaint up-to-date by describing screenshots used in Apple's marketing that contains the mode "Playlists." Additionally, in the iOS 5 user manual, Apple instructs users on how to browse music on a device by playlist: "The buttons along the bottom of the screen let you browse content on iPhone by playlists, artists, songs, and other categories."

They further claim that "the playlists that may be stored on these iPhone, iPad, and iPod touch devices and accessed via the "Playlists" tab or listing may be used to reproduce the sequence of songs listed in a particular playlist.

iOS 5 provides the additional capability of downloading navigable playlists over a wireless network. With Wi-Fi Sync, a compatible device loaded with iOS 5 is capable of initiating a download synchronization process which will transfer songs and playlists to the device."

A playlist may comprise a subset or collection of all audio program files stored on an iPhone, iPad, or iPod touch.

A number of components facilitate the capability of the iPhone, iPad, and iPod touch to reproduce a playlist of audio files. The iPhone, iPad, and iPod touch are each sold containing flash memory. The flash memory is a digital memory unit that provides each device with the capability to store one or more digitally compressed audio files that a user may listen to by accessing the "iPod" or "Music" application.

The iPhone, iPad, and iPod touch have a wireless communications port. Through its wireless communications port, each device loaded with iOS 5 is capable of establishing a data communications link for downloading a plurality of audio program files and a database sequencing file that specifies the playlist sequence. In particular, each device loaded with iOS 5 has the capability to initiate the download of a playlist sequencing file via a request sent by the device.

Each iPhone, iPad, and iPod touch loaded with iOS 5 has an audio output unit including at least a speaker.

The iPhone, iPad, and iPod touch loaded with iOS 5 have the capability to play a playlist of audio program files in the order of the playlist sequence continuously and without entry of a control command. Hardware and software components furnish the iPhone, iPad, and iPod touch with this capability. In particular, hardware components providing this capability include general purpose computer circuitry and an audio codec.

Apple has infringed and continues to infringe the '178 patent by making, using, selling, and/or offering to sell within the United States products that embody one or more of the claims of the '178 patent. Such infringing conduct includes, but is not limited to, making, using, operating, offering to sell, or selling at least the following products loaded with iOS 5: iPhone 4S and iPod touch generation 4.

As of October 12, 2011, when a user connects an iPod touch generation 3 or 4, iPhone 3GS, iPhone 4, or iPad generation 1 or 2 that is not currently running iOS 5 to a computer running iTunes, Apple prompts the user to upgrade the software on the device. An example of the iTunes prompt that directs a user to upgrade his device's software is represented below:

If the user clicks "Download and Update," then Apple sends the iOS 5 software to the user for automatic installation on to the connected device.

Apple intends for users who have an iPod touch generation 3 or 4, iPhone 3GS, iPhone 4, or iPad generations 1 or 2 to upgrade their devices to use the iOS 5 operating system. 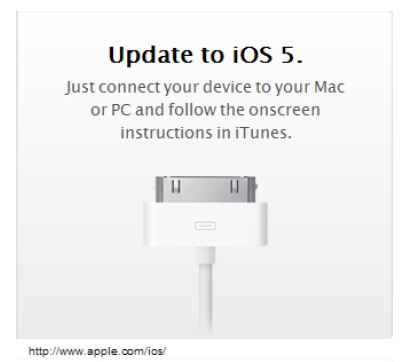 After the iOS 5 operating system is installed on an iPod touch generation 3 or 4, iPhone 3GS, iPhone 4, or iPad generation 1 or 2, that device is capable of wirelessly synchronizing with a computer running iTunes as described above. Users of these upgraded devices directly infringe the '178 patent.

Apple knew or should have known that users' installation of the iOS 5 operating system on the iPod touch generations 3 and 4, iPhone 3GS, iPhone 4, and iPad generations 1 and 2 would result in infringement of the '178 patent.

Apple has captured and dominated the mobile player and smart phone markets due to Apple's infringing and unauthorized use of the claimed subject matter in the '178 patent.

Apple does not have a license, either express or implied, or other permission to use the claimed subject matter in the '178 patent.

Personal Audio has been injured and has been caused significant financial damage as a direct and proximate result of Apple's infringement of the '178 patent.

Apple's infringement of the '178 patent has been and is willful.

Apple disregarded an objectively high likelihood that making, using, offering to sell, selling, and inducing customers to make and use devices loaded with iOS 5 infringed the '178 patent.

Apple will continue to willfully infringe the '178 patent, and thus cause irreparable injury and damage to Personal Audio, unless enjoined by this Court."

Update 2:41 EST: Maybe it's just me, but I found it interesting that Personal Audio provided the court with a disclosure statement stating that there's no parent company or publicly held corporation that owns 10% of their stock. Is this something that Personal Audio's legal team wants to play up with the jury? I don't know, but it made me think the opposite. I instantly thought what if Google, Samsung or Microsoft took a 9% stake in the company with a wink and a nod of buying Personal Audio's patent after a positive ruling. This disclosure wouldn't show that, right? It also amplified that this may be a bigger trial than I initially thought and that iTunes, Apple's Crown Jewel, is being challenged and that many competitors are probably cheering Personal Audio on behind the scenes. So if Personal Audio was planning to use this in their closing argument that they're David against Goliath, then it just backfired. I'm more suspicious of Personal Audio now than I was in July.  Of course that's just a personal opinion and nothing more. 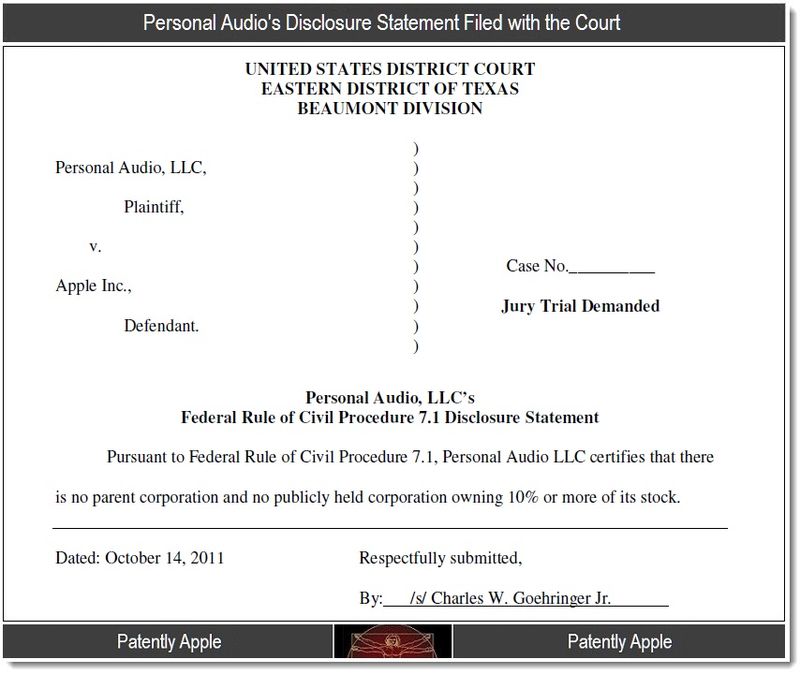 At the end of the day, is Personal Audio's case in round two any stronger? Time will tell.

Personal Audio seeks a trial by jury. The case was filed in the United States Texas Eastern District Court (Beaumont Office). The presiding Judge in this case is noted as being Judge Ron Clark.

Hmmm.... would it be easier for Apple to buy out this company? I can just imagine Samsung licking their lips at this....