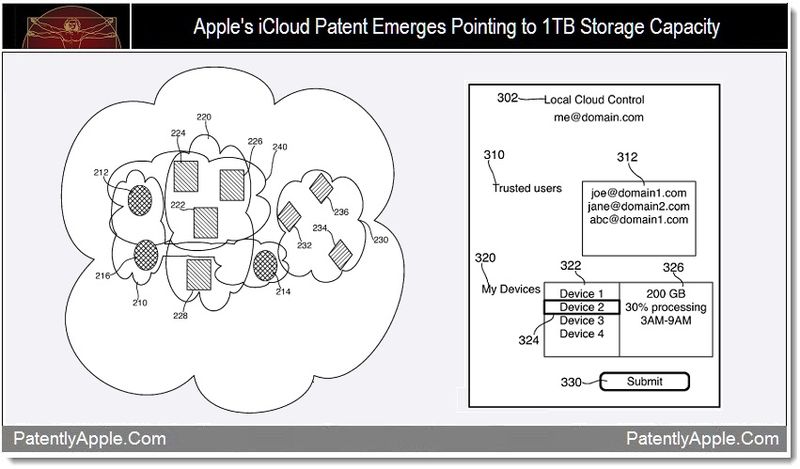 The year began with news that Apple was working on a new cloud-based safety-deposit box followed by an iTunes Cloud service before it was officially unveiled weeks later. Then in August Apple introduced us to future iCloud based printing services. To round it all out, Patently Apple posted an in-depth special report titled "iCloud: Winds of Change" which discussed how iCloud services would eventually push us into the era of the NC or Network Computer. Something that the naysayers have vehemently claimed would never ever happen. Well, today's patent application as revealed by the US Patent and Trademark Office, interestingly reveals how Apple is using a "librarian Service" on iOS devices to coordinate iCloud services and also create unique user credentials effortlessly. But more interesting perhaps is that the patent reveals that storage in the 1TB range is already on Apple's roadmap – and that certainly paves the way for the Post PC era's entry of the Network Computer – plain and simple.

Apple's overview states that with the increased availability of high speed Internet connections, many devices have the ability to connect to remote services or sources. In addition, as the cost of high speed Internet connections decreases, many users may maintain a constant or near constant connection to the Internet. Furthermore, as wireless communications systems expand, users could connect to remote sources at many different locations, including far from the user's work, home or other areas where the user typically could access the Internet. For example, wireless communications networks have expanded to the point where a device could connect to the Internet on a mountaintop in nature (e.g., while skiing or hiking).

Because of the enhanced ability of devices to connect to the Internet as a user moves or travels, a user could make an increased use of remote storage. In particular, a user could store information in one or more remote locations, while knowing that the information could remain accessible so long as the user has an Internet connection available. This could allow a user to expand the amount of storage available to the user beyond the actual storage within the device (e.g., the storage of a hard drive or solid state drive in a device).

In addition, the cost of operating a cloud storage system could include not only material costs (e.g., storage devices) but also network administration costs. In particular, each time a user wishes to provide access to restricted content to another user, an administrator may be required to generate and provide the credentials to the other user, and to release access to the restricted content for the generated credentials. This could require both time and administrator resources.

A user could define a local cloud by selecting a list of devices controlled by the user to include in a cloud. The devices in the list could identify themselves and their owner to a librarian, which could allocate resources of the identified devices for the local cloud. In addition, the user could elect to trust one or more other users, whose devices could also be made available for a cloud. The librarian could select a set of devices to combine to form a local cloud, where the devices are owned by one or more users. 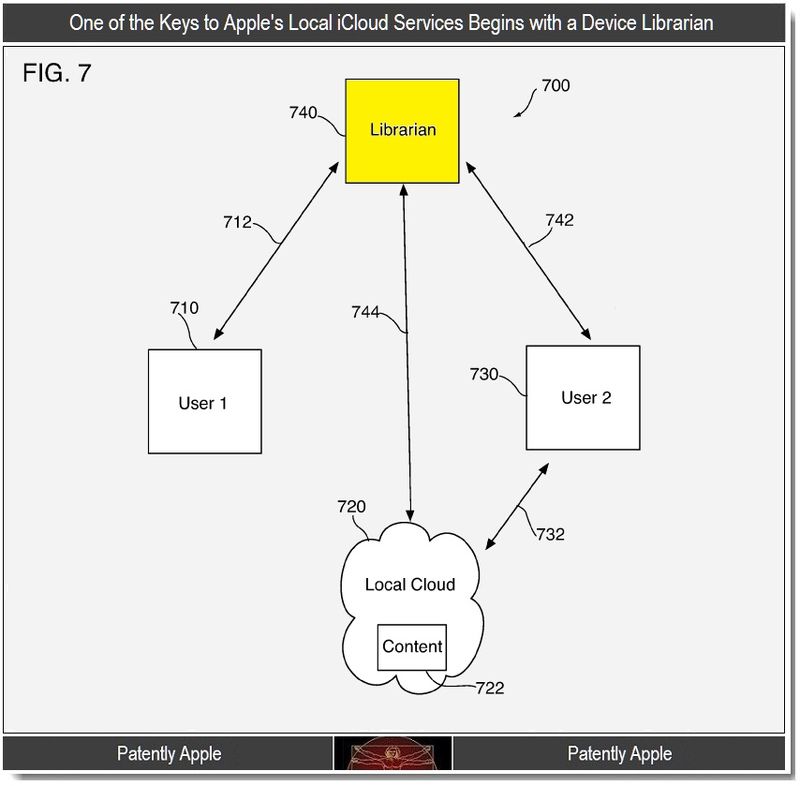 The Device Librarian Generates the Appropriate Credentials for Users

In some embodiments, the librarian could revise or edit a database from which local network information is pulled by each device or user managed by the librarian to indicate that the other user has access to the local cloud. 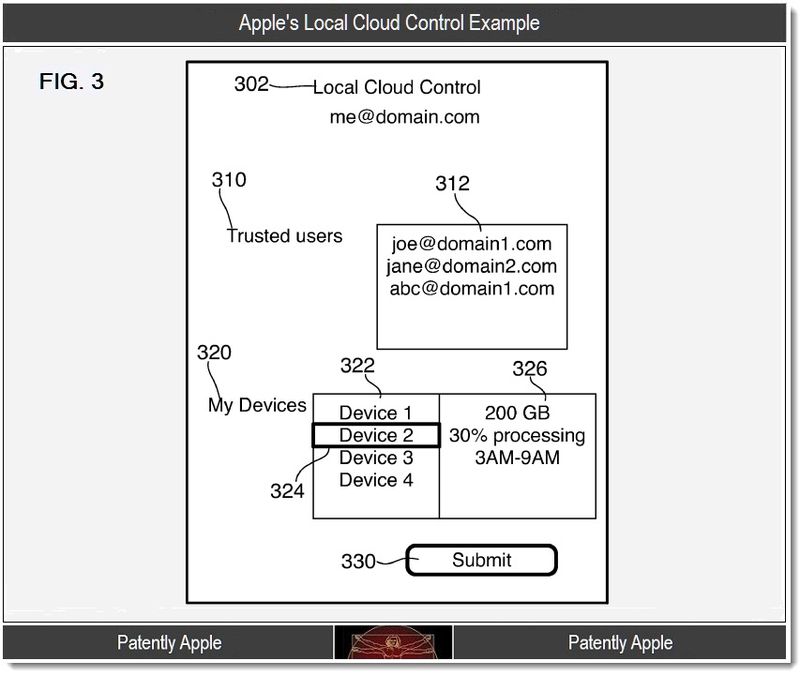 Apple's patent FIG. 3 is a schematic display of an interface for providing information regarding trusted devices and available device resources to a librarian in accordance with one embodiment of the invention. Note the data storage amount noted as being 200 GB which exceeds what is available today. In fact, the patent points to up to 1TB as you could see highlighted below. A sure sign that the goal of iCloud is to eventually support full-blown Network Computers or NC's which the naysayers of yesteryear vowed would never, ever, happen.

Apple continues to describe FIG. 3 by stating that "a user could form a local network storage system (e.g., a personal or local cloud) using any suitable approach. In some embodiments, a user could provide a request to the librarian for a local cloud. The user request could include any suitable criteria or requirement, including for example a storage requirement (e.g., at least 1 TB)."

Hi Jack - - - Yes! A missing piece of the Apple puzzle remains the "Home Server" -- i.e. Local iCloud in the patent.

Also, part of the solution includes the need for automatic: archival/backup and staging.

For example: 1) as network access permits the local iCloud could be uploaded and incrementally backed up ala TimeMachine -- but off site -- to readily-accessible primary remote iCloud storage.

2) remote iCloud content that is not frequently referenced, say hasn't been touched in 3-6 months, could be migrated to less-accesible, less-expensive secondary remote iCloud storage.

3) the local iCloud store would contain the most-frequently-used content and this would be mirrored and incrementally backed up to the readily accessible primary remote iCloud store.

4) the local Librarian and remote Librarian would mirror each other and contain searchable metadata and indexes of all the content regardless of where and how (local, remote primary, remote secondary) it is stored.

The content you regularly use will be instantly available (and updated) whether at your base site (local iCloud) or from remote iCloud when away.

Infrequently used content, like that iMovie or Final Cut video you made 3 years ago, will reside on secondary storage on the remote iCloud. However, both the local Librarian and the remote Librarian will contain the searchable metadata and indexes to this content.

Then, as the access to this content diminishes, it is migrated to the remote Cloud primary, then secondary storage... all automatically and all incrementally backed up.

The concept has been around for a while and is called "staged online" or "percolate up -- trickle down" storage/content management.

To my knowledge, though, this (Apple's patent) will be the first time this will be attempted on such a large scale -- supplying local/remote iCloud content/storage management to millions of users.

To a lessor degree, this is already implemented in the iTunes Match service which has been beta tested for a while and due for imminent release. The music content on the users local computers is matched against the iTunes cloud library:
-- matched music is made available by adding a token (pointer) to the iTunes library item to the user's iCloud library
-- unmatched music is uploaded to the user's iCloud library
-- the match/update of changes is performed on demand or a periodically scheduled basis