Apple's iCloud May use a Tagging Solution for iPhone, TV & Beyond 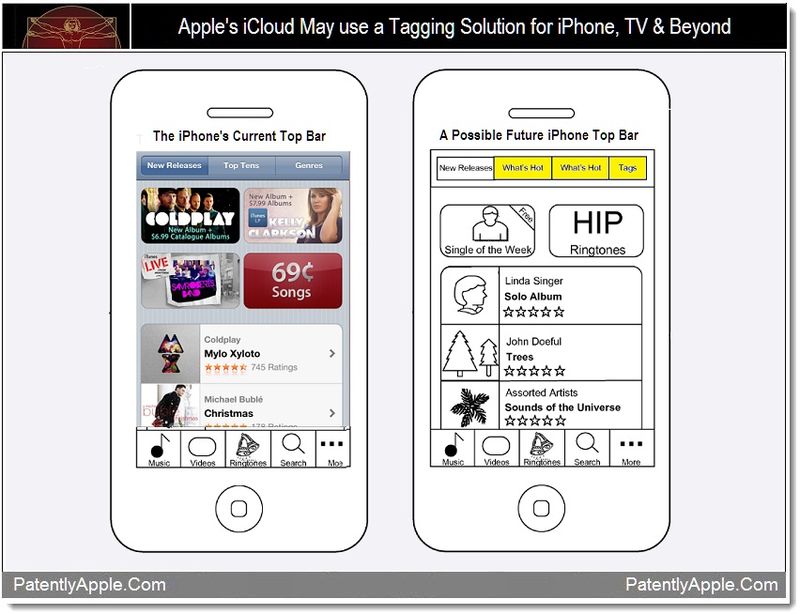 On October 27, 2011, the US Patent & Trademark Office published a patent application from Apple that reveals a new media tagging system that will be integrated into Apple's iCloud. In some respects portions of what is described in the patent is likely already in place. However, Apple is shown to already want to push iCloud services deeper into the sources of media like radio and TV. They also want to work closely with car and/or car stereo OEMs to integrate their new tagging standard to better tie content to iCloud for the benefit of iOS device customers.  According to Apple's invention specs, iApp Developers will be given design specifications so that current and future apps on iTunes will be able to conform to Apple's new emerging tagging standard. Apple's patent even illustrates a new iTunes UI for iPhone that will integrate media tagging prominently as shown in our cover graphic.

The playing of media items, such as songs, videos, audio books, etc. on various electronic devices has become commonplace. Now more than ever users have the opportunity to play these media items on many different devices. It is not unusual for an average user to own and operate multiple devices, such as portable media players, cell phones, laptop computers, and desktop computers. This is in addition to the multitude of electronic devices used to play media items for years, such as televisions, home stereos, and car radios.

Therefore, what is desired is a system, method, and apparatus for providing a tagging solution that allows for a more user-friendly environment when dealing with multiple media devices and/or multiple media-related applications.

So what would that user-friendly environment, system, method and apparatus involve? Well according to Apple, in one embodiment, media items could be identified as being of interest (i.e., "tagged") as they are being played, and this information could then be sent to a tag aggregator, which aggregates tags from multiple types of devices. The tag aggregator could be located on the same device as a tagging application on which the media items are tagged, or alternatively it could be located on a different device.

Up until now, Apple has limited tagging to the iPod nano's radio feature. This patent gives us the impression that the floodgates are about to open on tagging used on all iOS devices present and future.

In another embodiment, Apple states that multiple tag aggregators could be used simultaneously to aid in the updating of information regarding media items of interest across a greater range of devices. This is especially useful in cases where a particular tagging application may not be able to directly interface with a particular tag aggregator.

In some cases, a tag aggregator and a media source could enter into a mutually beneficial relationship (referred to as partnering) that could provide benefits for both the tag aggregator and media source. For example, in some cases, a media source could be compensated for embedding or otherwise associating metadata with particular media items or for configuring an otherwise proprietary tagging application to be compatible with the tag aggregator. The compensation could take many forms, such as financial incentives along the lines of a bonus that could be received when, for example, a media item (or items) tagged using the proprietary tagging applications has been purchased.

The Three Categories of Device/Applications

Apple's patent FIG.1 shown below is a diagram illustrating a representative system of devices in accordance with one embodiment. Here, tag aggregator 100 could receive tag information from multiple devices/applications. For simplicity, the different devices/applications could be grouped into three categories. 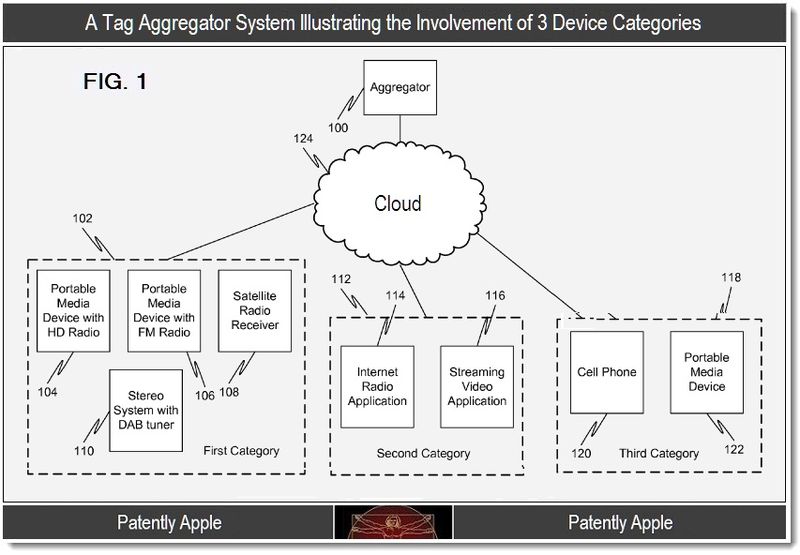 How iCloud Could Play a Role with Cable TV, Cell Phone Protocols & More

And to make sure that there's no confusion that "direct cable connection" means Television, Apple spell it out in patent point number 50 as follows: "For all types of media items, additional metadata may be tracked, such as an identification of the source of where it was transmitted from, such as the call sign and dominant market area (DMA) of a radio or television station, identification of a radio or television network with which the transmitter is affiliated, or the like."

A Future iTunes UI will include a Tags listing for iPhone, Cars & Beyond 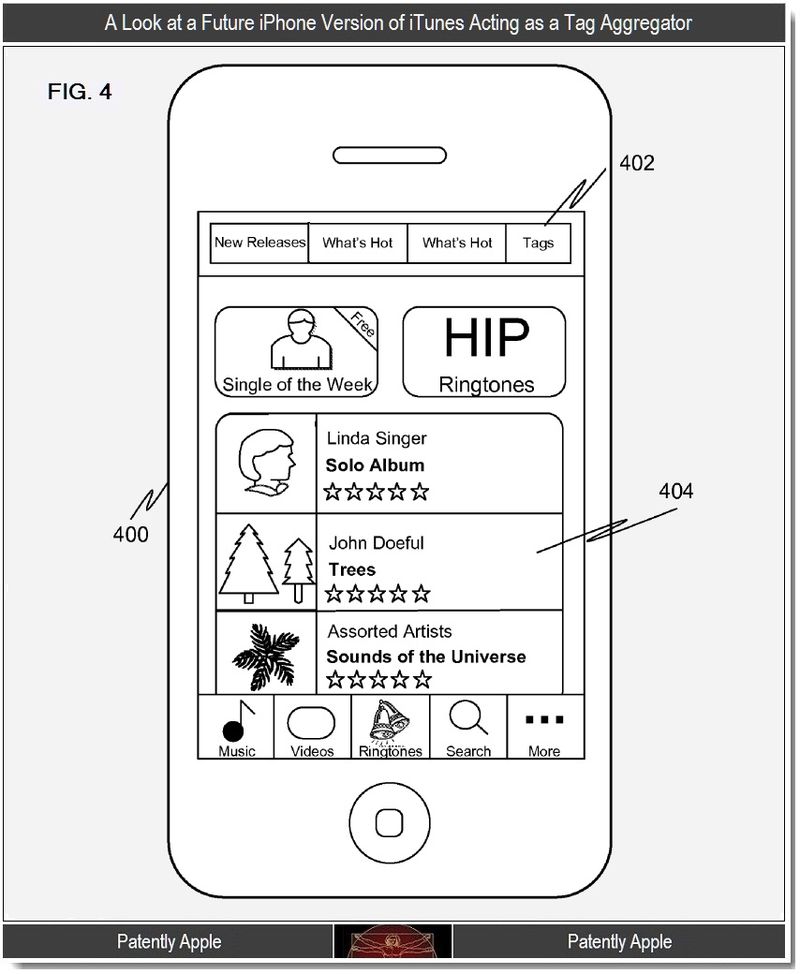 It should be noted that, for purposes of this description, a tagged media item is any media item that has been identified in some way as being an item of interest. Without being limited to particular mechanisms for tagging, examples of mechanisms to tag media items include graphical buttons or menu selections in graphical user interfaces (GUIs), physical buttons on hardware devices utilized to play the media items (such as a dedicated "tag" button on a car radio), and keyboard or other general input devices.

In one embodiment, an integrated chipset may be provided in various electronic components to enable the tagging function. For example, a car radio could be manufactured to include an integrated tagging chipset.

This Tagging system on iCloud definetely rocks !! Thanks for sharing..