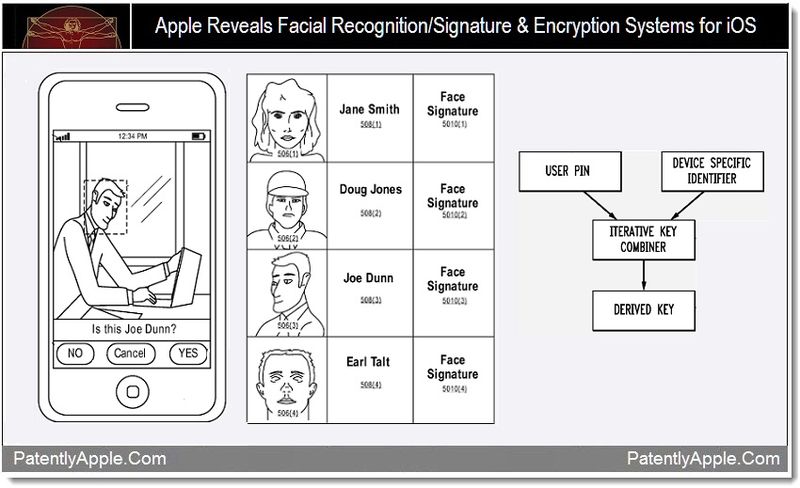 On October 13, 2011, the US Patent & Trademark Office published two patent applications from Apple that reveal that they're working on a new facial recognition/Signature system in addition to a new encryption system for a future implementation of iOS. Apple's new iPhone 4S offers new face detection capabilities but the next step appears to go one step further with tagging the photos for applications like your address book and so forth. In the case of Apple's newly proposed encryption, it's definitely a must have feature if Apple wishes to push further into the Fortune 500 and beyond.

Organizing images by tagging identification information of individuals into each image is useful; however, this method of managing digital images suffers from implementation drawbacks in the case of camera-enabled portable handheld communications devices such smartphones. In particular, the effort required to manually tag a large set of images may render the task impractical. Further, although software on desktop and notebook computers may be capable of providing some level of automatic tagging of digital images, these applications require images to be offloaded from the handheld device onto the desktop or notebook computer prior to being tagged. Additionally, these applications require substantial user interaction to properly tag each image.

An embodiment of Apple's invention is directed to an improved image tagging system that tags images in a mobile handheld communications device, based on the user's contacts list stored therein. In one embodiment, the image tagging system compares a face in a given picture (that the user has just taken using the built-in camera) to faces in the user's contacts list images. A matching contact is located in the contacts list. The picture is then tagged with information from the matching contact. In one embodiment, the picture is tagged by inserting identification information into a header of the picture.

In a further embodiment, the accuracy of the face identification may be enhanced when the device could also access a second database of images that have been mapped to individuals (who are likely to also appear in the user's contact list). The second database may be more complete than the contacts list data structure, in that it could have more instances of an individual's face.

Apple's patent FIG. 2 illustrates a detailed flowchart or algorithm for a tagging application that may have two phases of operation: an identification phase 201a and an image tagging phase 201b. 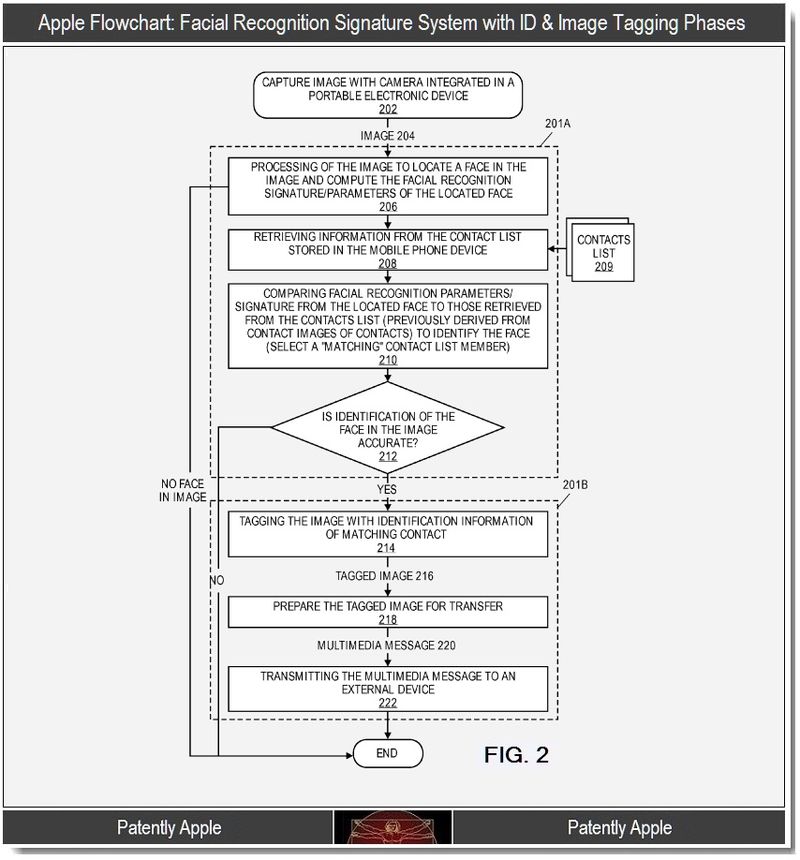 Apple's patent FIG. 3 shown below is a screenshot of a camera interface window in which a user may enter a command to capture an image; FIG. 4 shows an example image in which a face has been detected and located; FIG. 5 is an example contacts list stored in a mobile device; FIG. 6 is an example verification interface for verifying a matching contact. 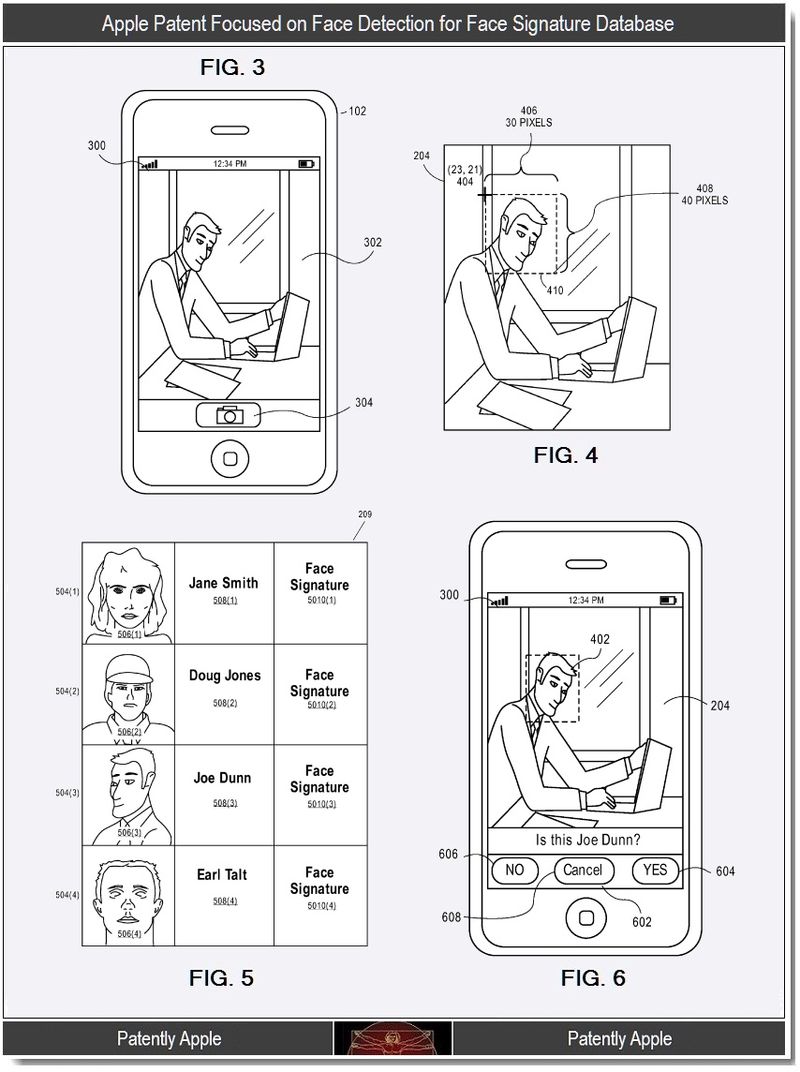 Apple's patent application 20110249144 was originally filed in Q2 2010 by inventor E-Cheng Chang. Here's a temporary link to the patent for those wishing to delve into this patent further. Temporary links are only good for about 24-48 hours.

A new security oriented patent application from Apple surfaced today titled: "Systems and Method for Content Protection Based on a Combination of a user PIN and a Device Specific Identifier."

As Apple pushes further into the Fortune 500 companies and top Medical Hospitals in the US as Tim Cook confirmed during his presentation this month, such security measures are a must for IT. 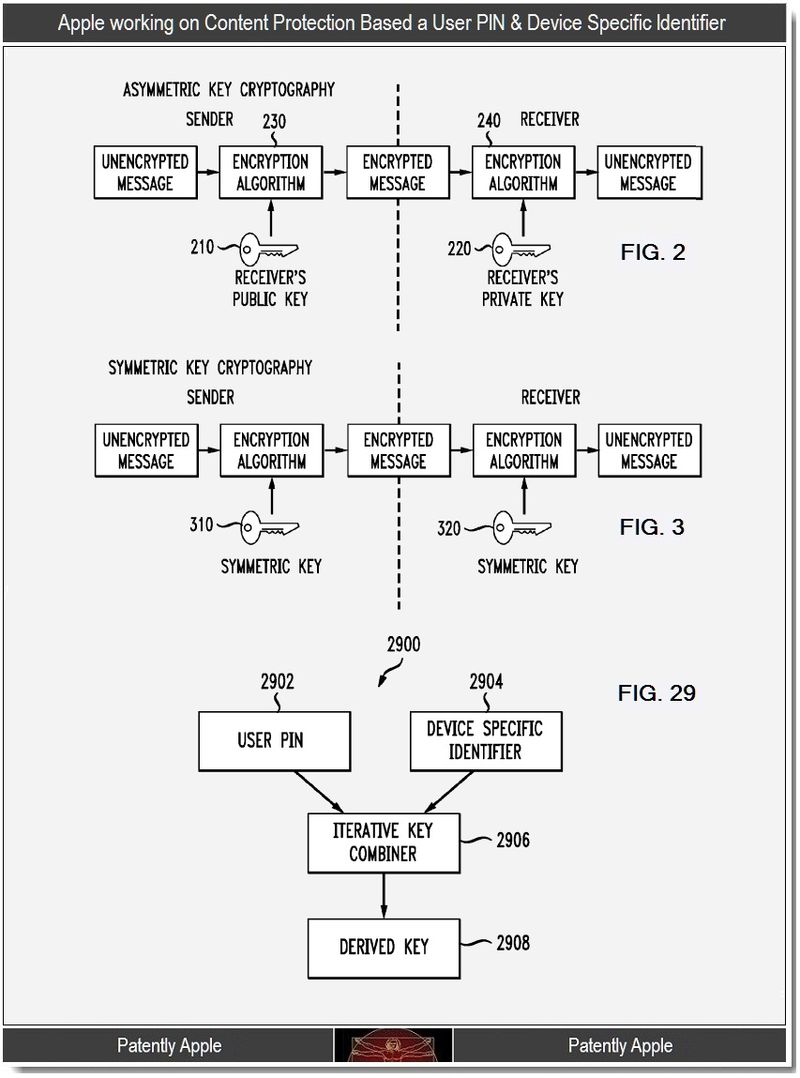 Apple's patent application 20110252243 was originally filed in Q2 2011 by inventors Michael Brouwer and Mitchell Adler. Here's temporary link #2 for those wishing to review the full patent. Note that temporary links are only good for about 24-48 hours.

And lastly, there was another patent of interest published today titled "Opportunistic Multi-tasking." It appears to simply cover Apple's current iOS multitasking details. However, if you're interested in checking it out in the hopes of gleaning something new, you could check out temporary link #3 that's only good for 24-48 hours.