Apple Preparing another Round of FaceTime Innovations

On Oct 13, 2011, the US Patent & Trademark Office published a powerful group of seven Apple patents concerning the next round of FaceTime videoconferencing innovations. Some of these innovations include new PIP controls, new focus and exposure operations and a superimposing feature. The depths of these patents are mind numbing as they cover everything from the camera technology and software magic behind FaceTime through to actual user examples. With Microsoft likely to integrate Skype into Windows 8 in 2012 or thereafter, Apple knows that they have to advance FaceTime with important conferencing features for the consumer and the enterprise user in order to stay ahead of the pack.

Many of today's portable devices, such as smartphones, provide us with video capture functionality. A user of the portable device could capture both still images and video through a camera on the phone. However, to transmit captured video to another party, the user must generally either send the video directly to the other party or upload the video to another location (e.g., an Internet video hosting site) after the video is done being captured. Unfortunately, this doesn't allow the other party to view the live video stream as it is captured by the portable device.

In addition, standard portable devices are only equipped with one camera, and processing information from this one camera is difficult enough. An ideal device would have multiple cameras and could send out live video that is a composition of video from at least two cameras. This is an especially difficult problem in light of the limited resources available for portable devices, both in terms of the device processing multiple captured video streams and a network to which the device is connected handling the transmission of the live video streams.

An Overview of Apple's Proposed Solution

Apple's invention covers an iPhone with dual cameras and a network interface to transmit captured images to one or more devices during a real-time FaceTime session between the users of the devices. The iPhone will also include an encoder that could be used to encode the captured images for local storage or for transmission to another device. The iPhone will further include a decoder that allows the device to decode images captured by another device during a real-time communication session, or FaceTime session, or to decode images stored locally.

During a video conference with another device, the mobile device of some embodiments could transmit other types of content along with the video captured by one or both of its cameras. One example of such other content includes low or high resolution picture images that are captured by one of the device's cameras, while the device's other camera is capturing a video that is used in the video conference.

Other examples of such other content include (1) files and other content stored on the device, (2) the screen display of the device (i.e., the content that is displayed on the device's screen), (3) content received from another device during a video conference or other real-time communication session, etc.

In some embodiments, the request to switch cameras not only could originate on the "local" device that switches between its cameras during the video conference, but also could originate from the other "remote" device that is receiving the video captured by the local device. Moreover, allowing one device to direct another device to switch cameras is just one example of a remote control capability of the devices of some embodiments. 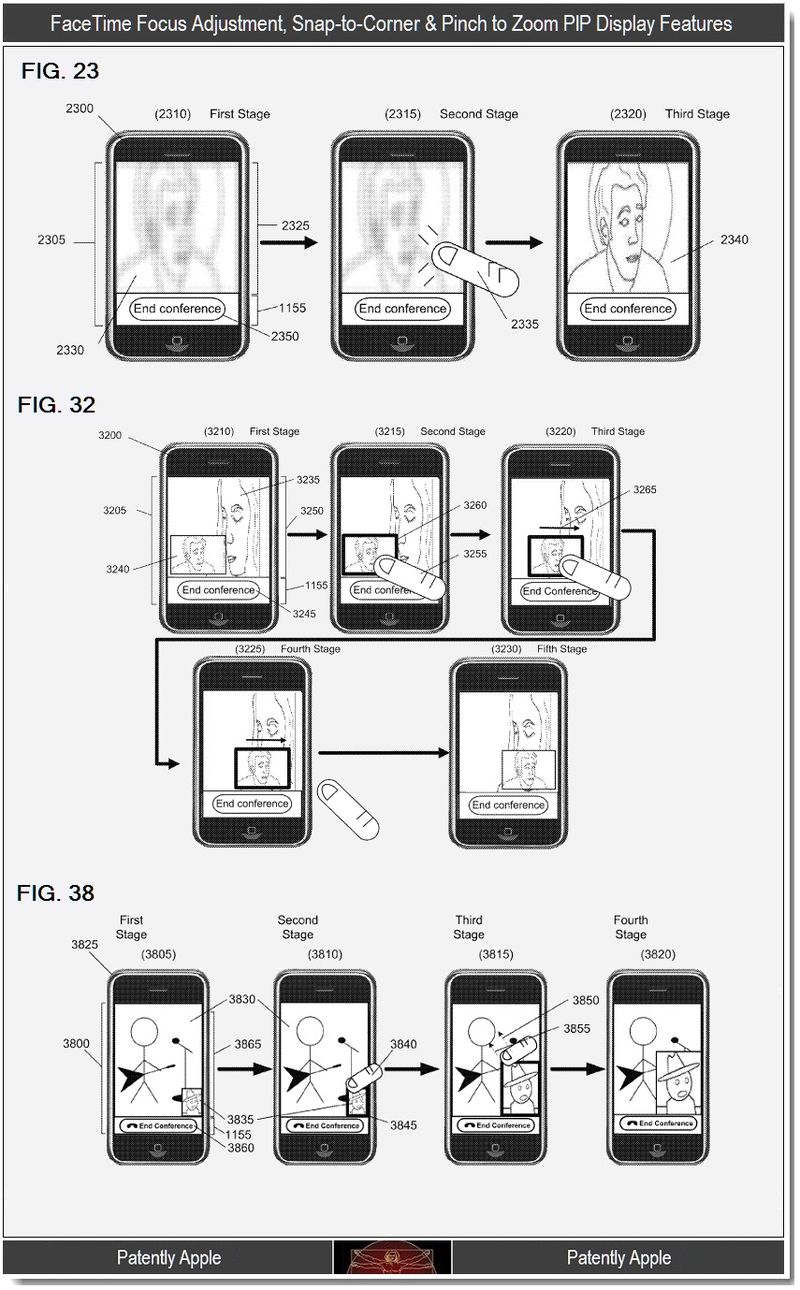 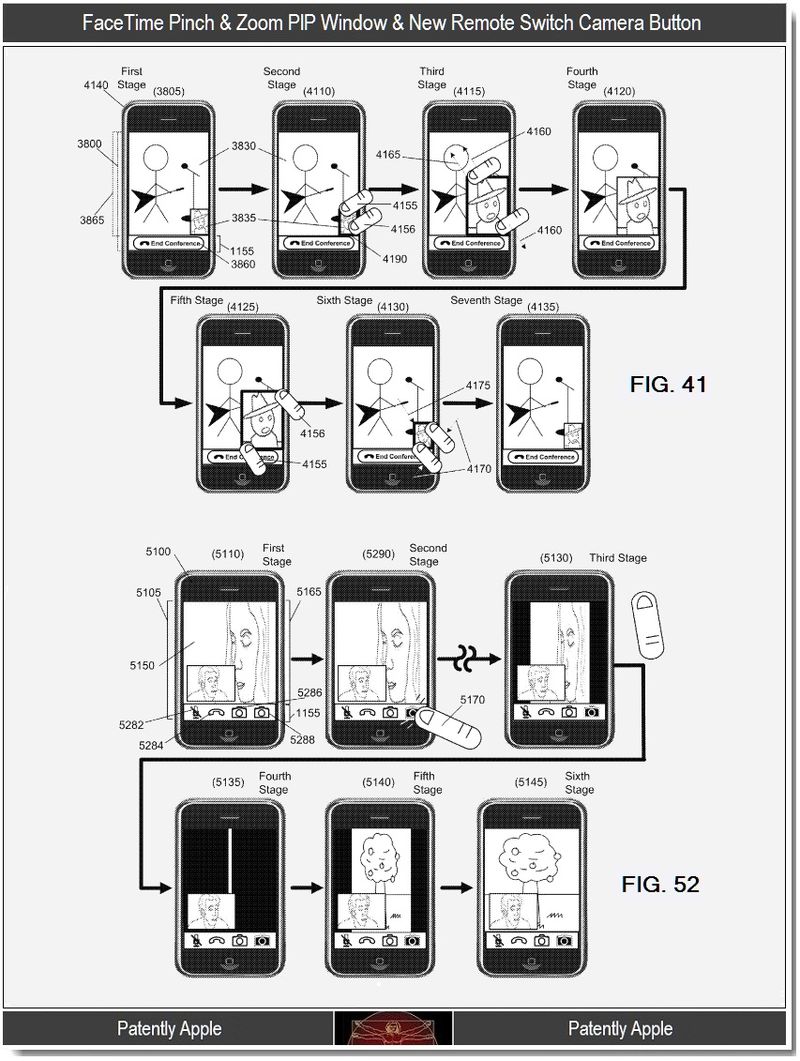 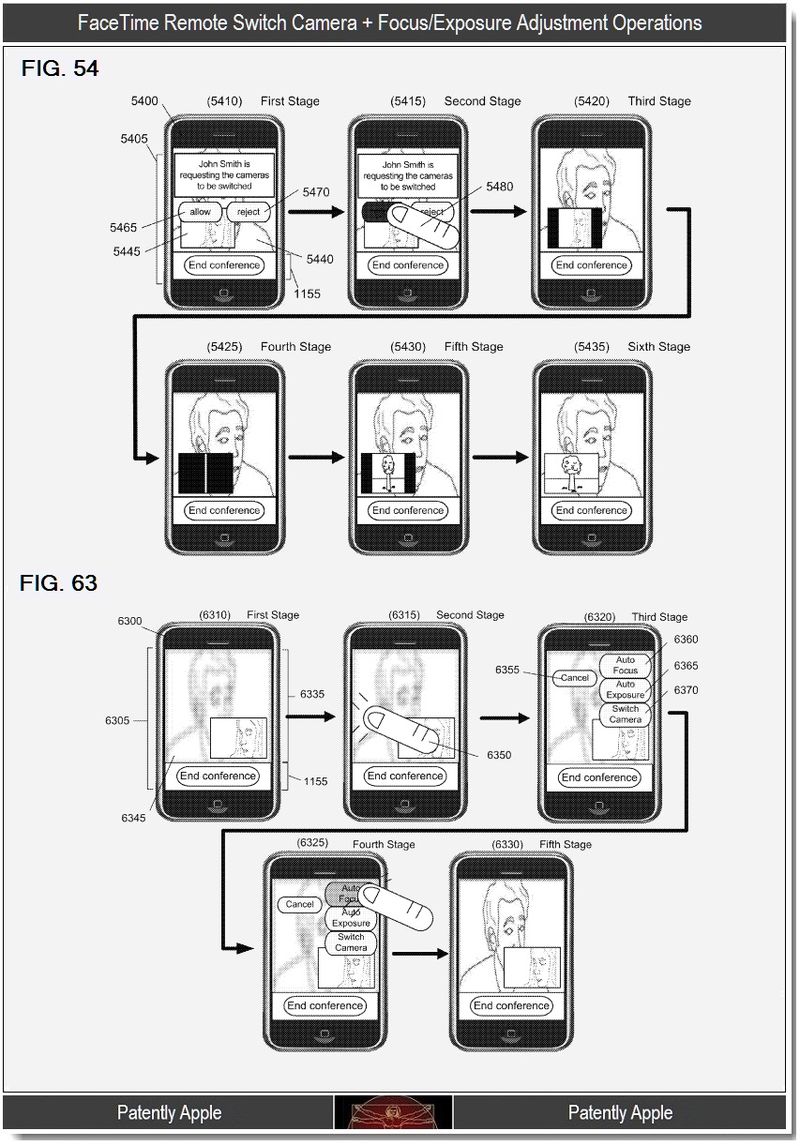 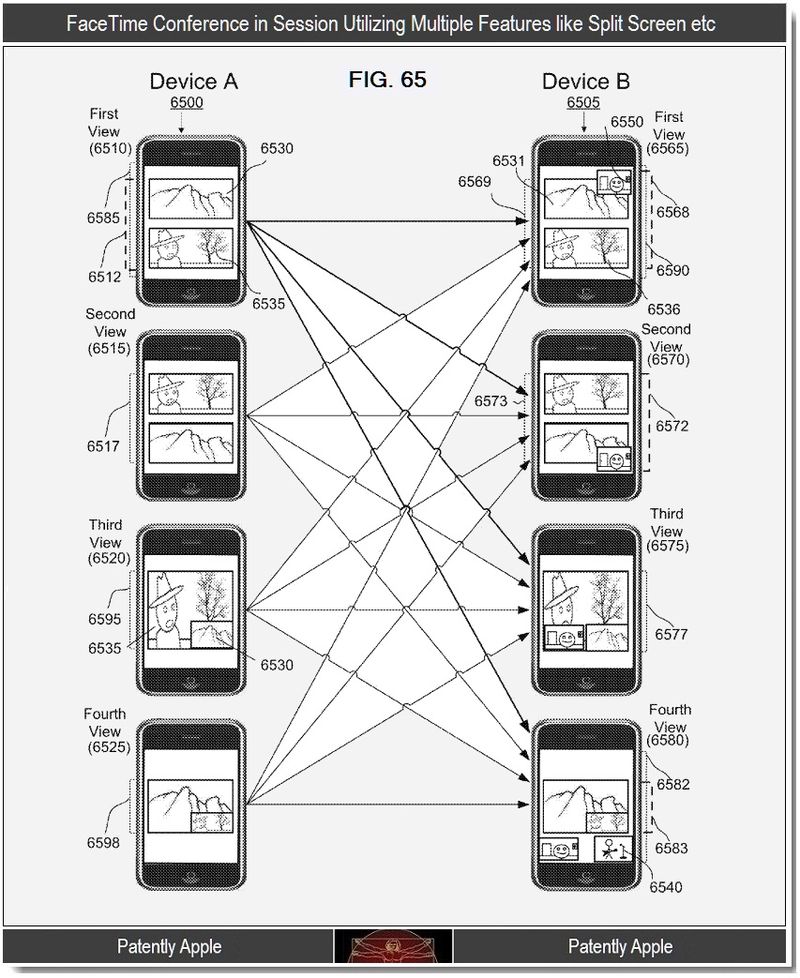 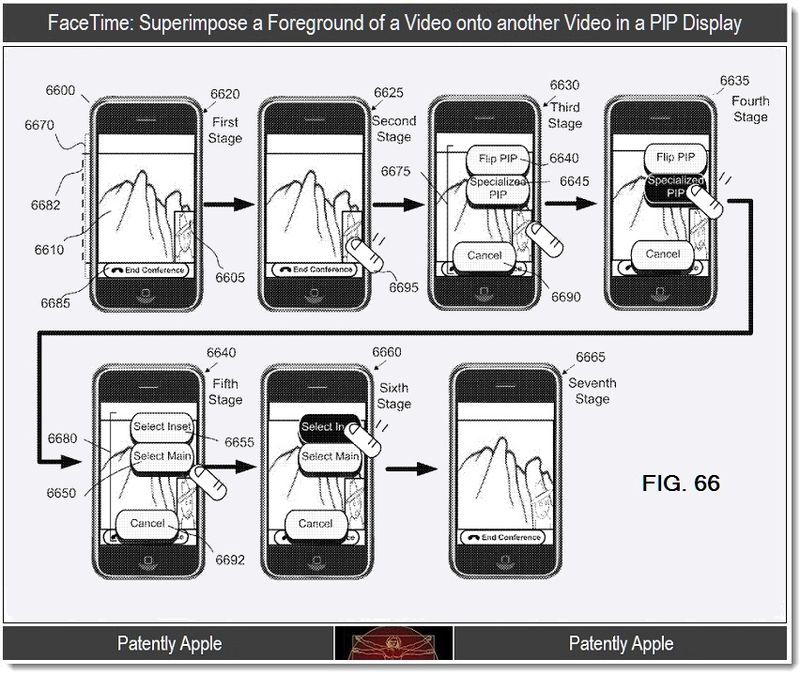 Hi Drew, the patent I think you're referring to is here:

And no, I'm not aware of a Nintendo type of patent. But it'll be nice if Apple could figure that one out. I like FaceTime but would like to see Face-to-Face, like Apple's patent hints at.

Thanks for your great input Drew. Cheers.

There's a real need for dual cameras on the front of the device. The reason for this is to solve the "staring off into space" problem during video chat.

There's no way to make eye contact with the person you're Facetiming with because the camera isn't in the center of the screen. I understand in the past Apple has filed patents for putting a camera behind the screen but this solution seems barely feasible.

The real solution is two identical cameras placed symmetrically on opposite sides of the screen. A software or hardware module would then transform the two video streams in realtime to find the average, which would allow one to look at the center of the screen and appear to be looking at the camera (on both sides of the chat).

Are you aware of any patents like this? I know that the Nintendo DS uses dual cameras, but they're used to create a 3D video, not for this purpose. They're also both _above_ the LCD display, which wouldn't solve the chat problem.