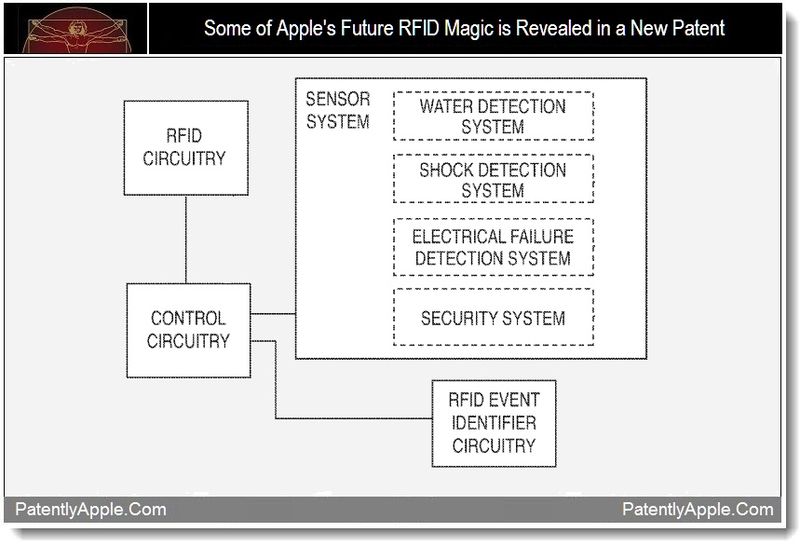 On September 15, 2011, the US Patent & Trademark Office published a patent application from Apple that reveals some of the magic behind their upcoming RFID device circuitry. Steve Jobs has always loved to play up all-things magical whether they pertained to the new magic mouse, magic trackpad or simply talking up the magical experiences of a particular device or iOS feature. When we think of future RFID applications, we simply think of them as magically communicating with other devices somehow. Well in todays patent report we point out some of the technology that will go into future Apple products that will allow us to make banking transactions and opening a door with an electronic key seem magical and more. Apple's invention also touches on new security features associated with their RFID circuitry and points to inductive charging and the possibility of using solar power to charge future RFID devices. Updated at 9:30 PST with two new mini reports.

Apple's patent FIG. 1 shown below illustrates an illustrative block diagram of an electronic device having RFID circuitry 115 and RFID reader 199. Although the device could be a fixed device such as an iMac or Cinema Display, emphasis is placed on portable devices such as the iPhone, iPod touch or MacBooks.

Although the design illustrated in FIG. 1 only illustrates one RFID circuit, the patent states that there could be multiple RFID circuits per device and that they could be either be active or passive in nature. 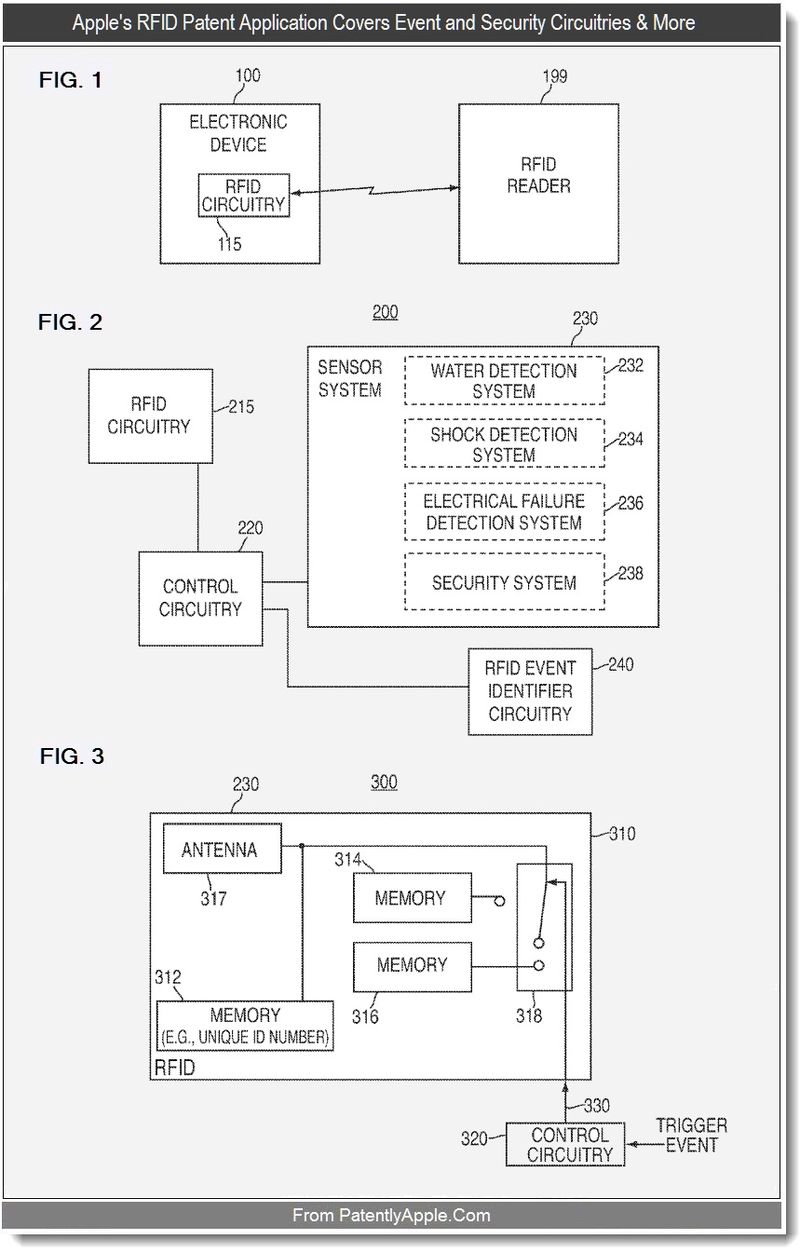 The noted RFID reader may be a multifunctional device that could read data stored on RFID circuitry and perform other features for the electronic device (e.g., charge a battery). An example of a multifunctional device may be an inductive charging pad having an integrated RFID reader. It should be noted that a recently published Apple patent application covered a new inductive pad which in fact had a wireless option that was sadly overlooked by most. With the coil removed, we see that it's just a simple inductive pad like everyone wants. What would be new is adding the RFID circuitry. In another embodiment, Apple states that the RFID reader may be an accessory device that could connect to a computer.

The RFID circuitry is said to have a built-in ID along with preprogrammed error messages. A built-in sensor system (230) noted in patent FIG. 2 above, is designed to monitor various aspects of the portable device which may indicate the cause of device failure or malfunction or otherwise compromise operation of the device. The built-in security subsystem covers water damage, electrical failure, shock detection (if you drop your device) and security. The latter may detect attempts or breaches of your device and appropriately report such breaches.

One of the key attributes of the invention revolves around RFID event handling circuitry that could update data stored in predetermined intervals or in response to an event. A user will also be able to instruct the event handler to store user-selected information such as user contact information or more importantly credit card payment information.

Apple's patent application is to a large degree a supportive patent in context with all of their previously applied for RFID/NFC patents covering such matters as using an iPhone as an iWallet when you're out shopping, banking (one, two and three) or using it as an electronic key. In order for these transactions to occur, the device must have an event handler to assist with information exchanges. If an iPhone is to open a hotel door, the iPhone must be given information like a password or code key from the hotel's front desk at check in that will assist that specific action of using your iPhone to open your suites door. In a flash, the iPhone will communicate with the RFID enabled door lock to open it and that necessary key information is stored in the device's event handler. In the future, electronic keys could apply to your home, car, office and beyond.

The invention also relates to a plethora of devices that the RFID circuitry will be able to communicate with such as televisions, Apple TV, vehicle instruments, cameras, domestic appliances medical instruments, stereos and so forth which was basically covered in more depth in Apple's April 2010 NFC patent. Today's patent also covers RFID communications using an antenna which again was covered more in-depth in Apple's July 2011 patent application. To view other possible future NFC/RFID applications, see our Archives.

Apple states that the system's power supply may work with sources such as a power grid connection, batteries or a natural source such as solar power of solar cells.

One: Print Orientation of Documents based on Devices Sensor Output 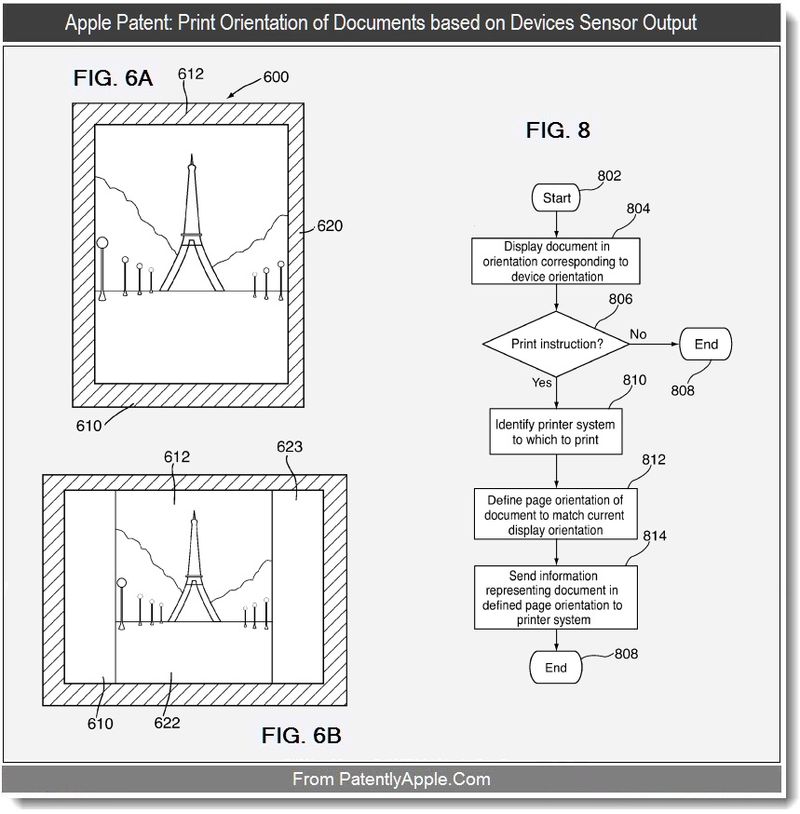 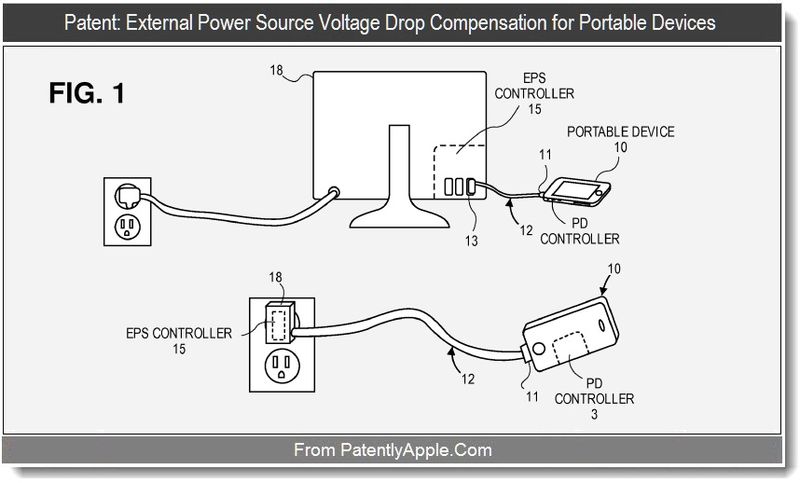 Patent Abstract: "A portable electronic device has a connector with a first pin and a second pin, and a battery charging circuit having an input coupled to receive current through the second pin to charge a battery of the device. The portable device also has a controller to determine whether the connector is coupled to an external power source (EPS) having a power converter circuit that can provide the current. The controller on that basis drives the first pin to stimulate the power converter circuit to raise voltage on the second pin." See patent application number 20110221604 for more details.