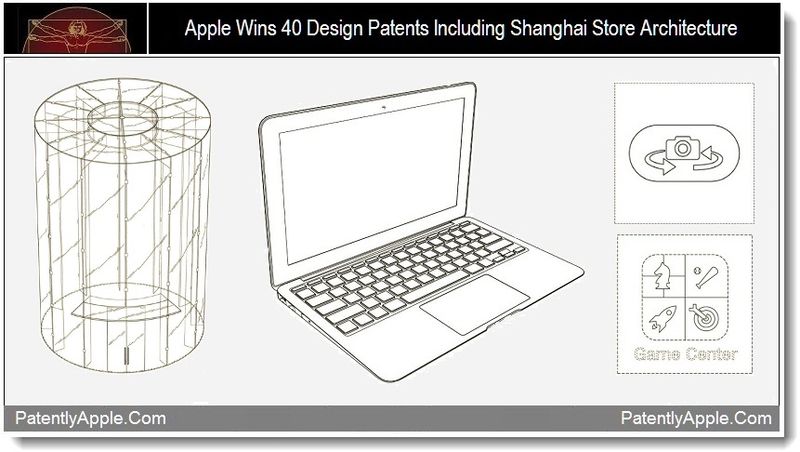 What's with Apple jamming through hundreds of design patents through China's Patent Office this past year? The increase in design patents is measurably noticeable but the reasoning behind it isn't clear in the least. One could only surmise that Apple simply foresees the majority of future copycat designers coming from Asian OEMs. With that said, today's report covers an overview of the latest 37 design patents that were granted to Apple in China this past Friday in addition to a peek at a few architectural styled figurative design graphics showcasing Apple's beautiful Shanghai Store.

The vast majority of Apple's latest round of design patent wins in China covers all-things iPhone. Specifically, the design patents cover various user interface (UI) elements from the iPhone's app dock to varying views of an open productivity folder to phone-specific elements covering such things as mute, keypad, speaker, FaceTime and so forth. The designs also covered icons covering Game Center, two-camera views and one relating to playing music. 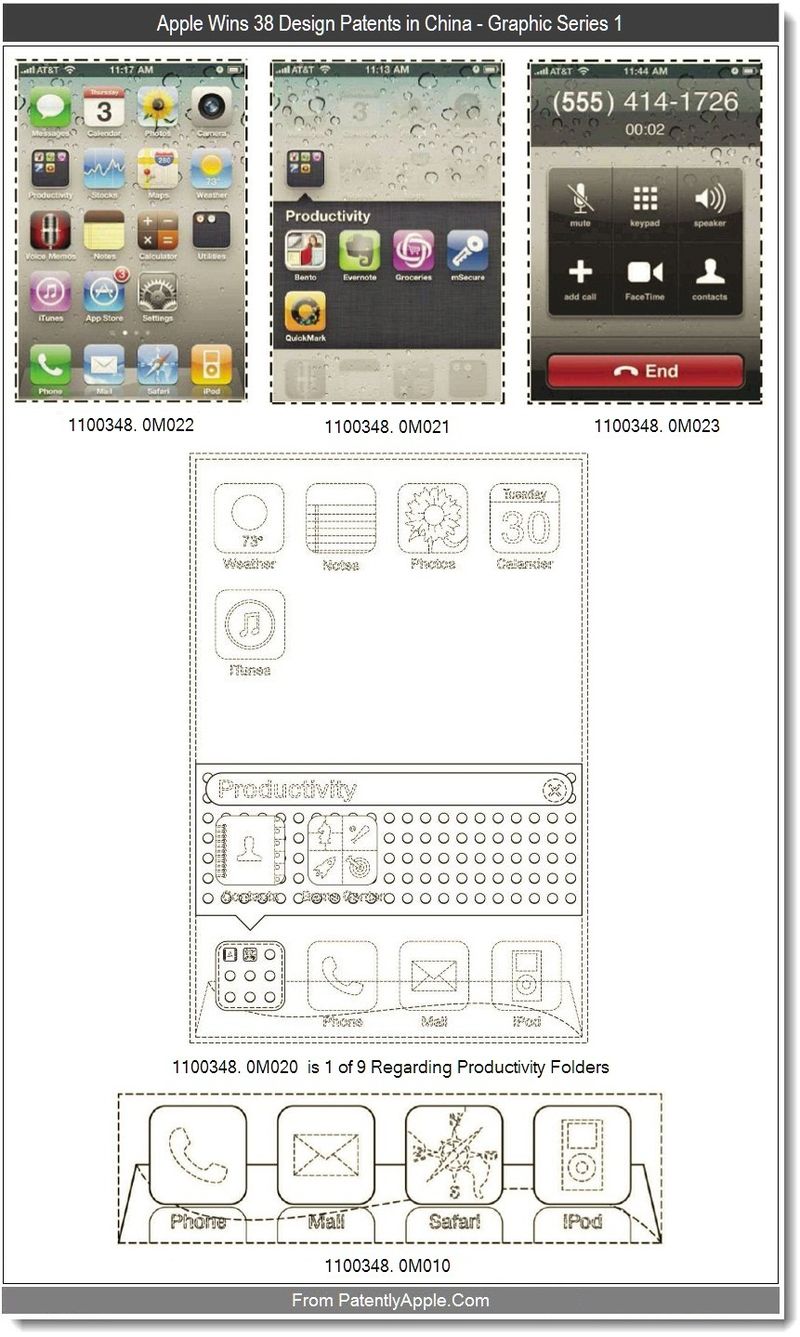 In addition to those specifically relating to the iPhone, Apple won three design patents relating to iAd and nine relating to Apple's latest iPod nano. 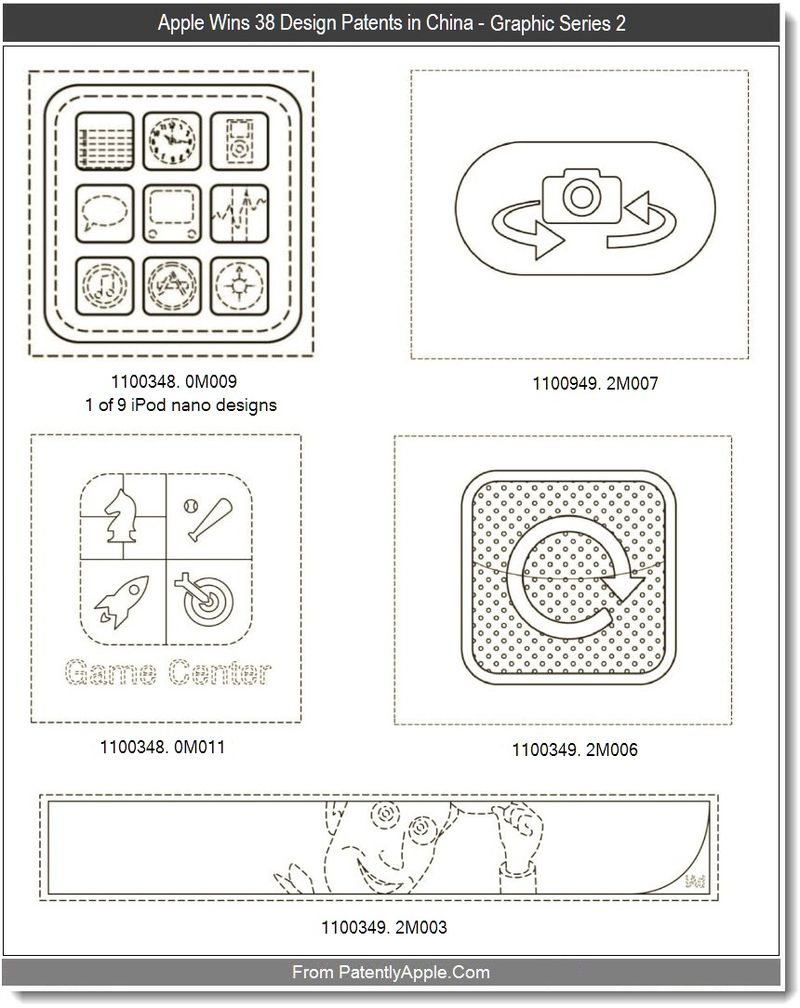 Beyond iOS device and software element design wins, Apple chalked up four design patents covering the MacBook Air. The first set covered actual photos of the MacBook Air (not shown) while the second and third sets covered the MacBook Air's design in black and white. As you could see in one example of the fourth set of MacBook Air designs, Apple chose to oddly present the graphics in a beige-like tone for whatever reason. Hmm, come to think of it, it kind of matches the color of the Asus copycat design that we refer to below. 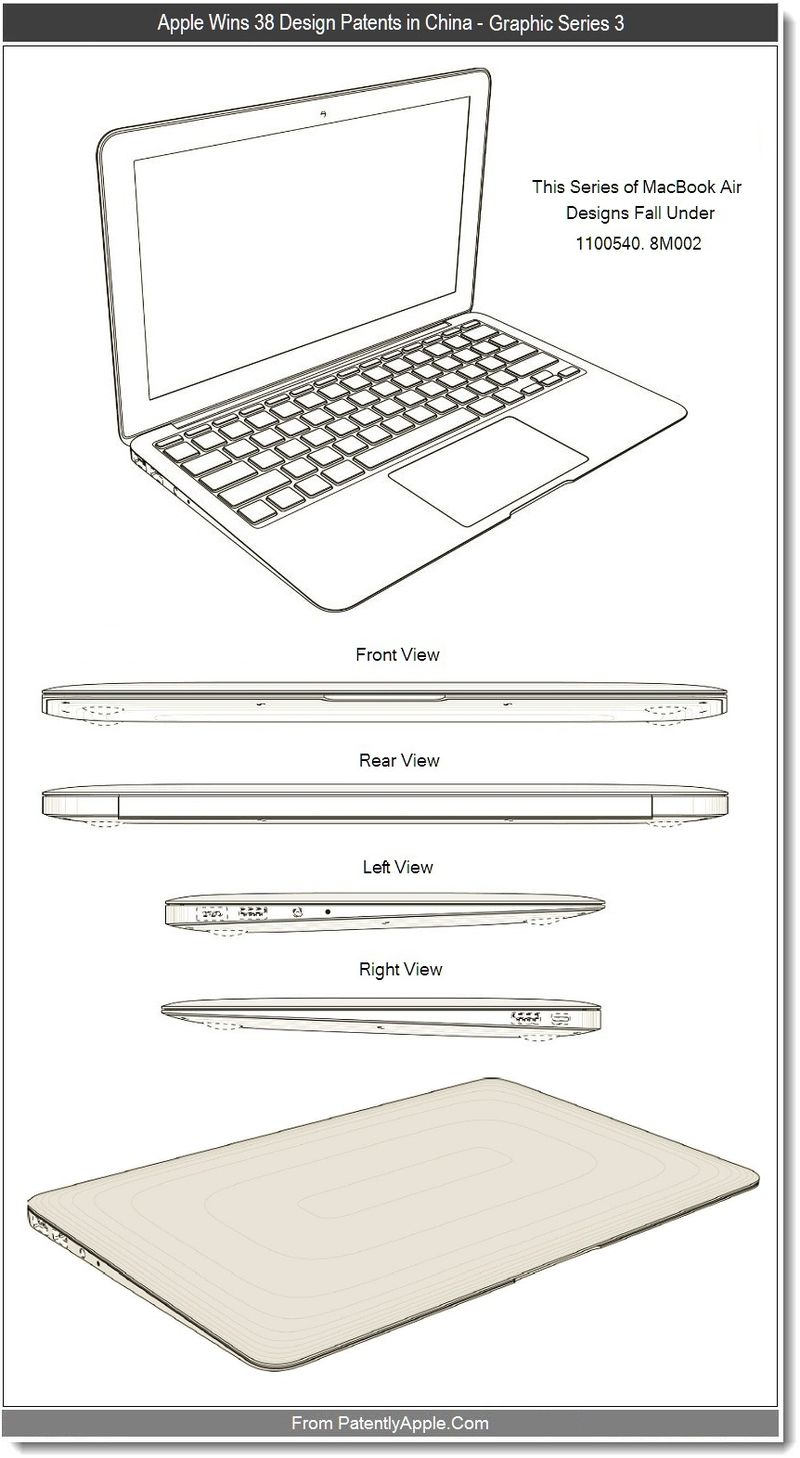 Apple's extensive design patent coverage of their MacBook Air could be strategic as they consider copycat lawsuits against manufacturers of the upcoming Ultrabook. The first Ultrabook design by Asus, which was an in-your-face MacBook Air copycat design, was presented at Intel's Spring IDF conference held in June. This week's Fall IDF session is promising to bring forth a massive wave of new MacBook Air-like Ultrabook designs. Whether Apple thinks that their legal efforts against Samsung with the iPad could be duplicated with MacBook Air copycats is yet to be determined – so stay tuned. 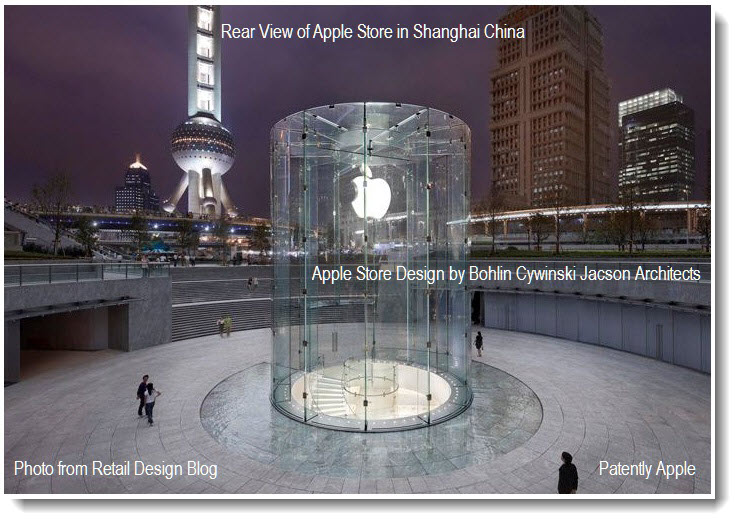 In our last batch of design patent graphics of the day, we cover Apple's three design wins relating to their Shanghai Store glass architecture. The wins were covered by patents 1100030.6M001 through to 6M003. One covered the overall design of the Store along with views from the side and even the top of the store. The other two emphasized the stores long glass panels where one patent exclusively covers the panels of glass as indicated below. 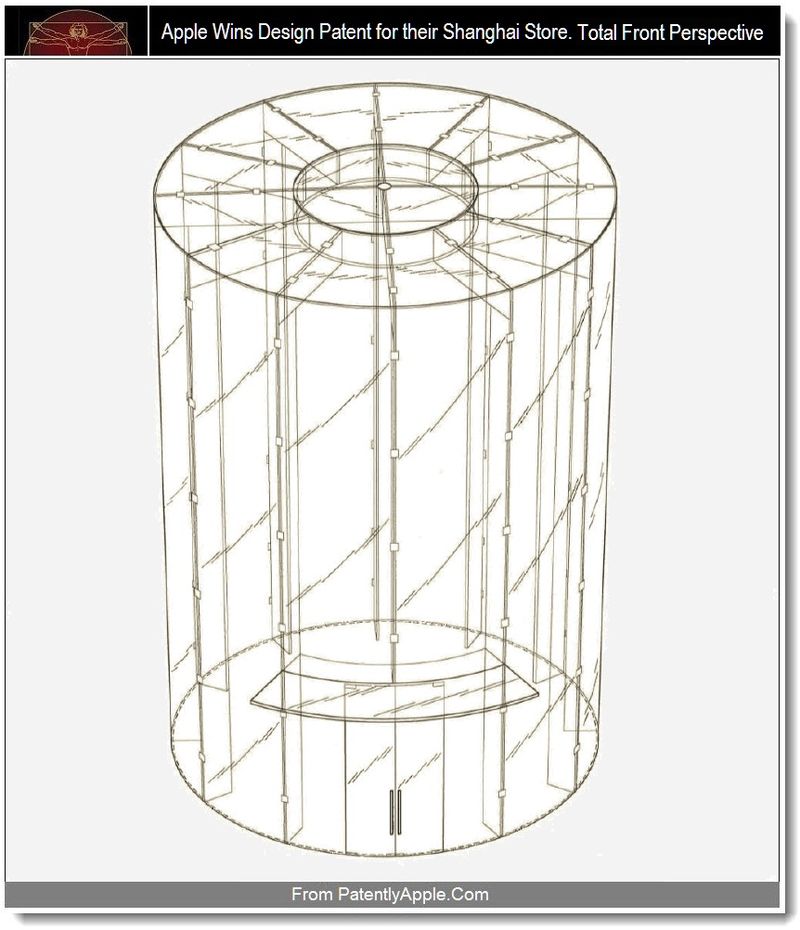 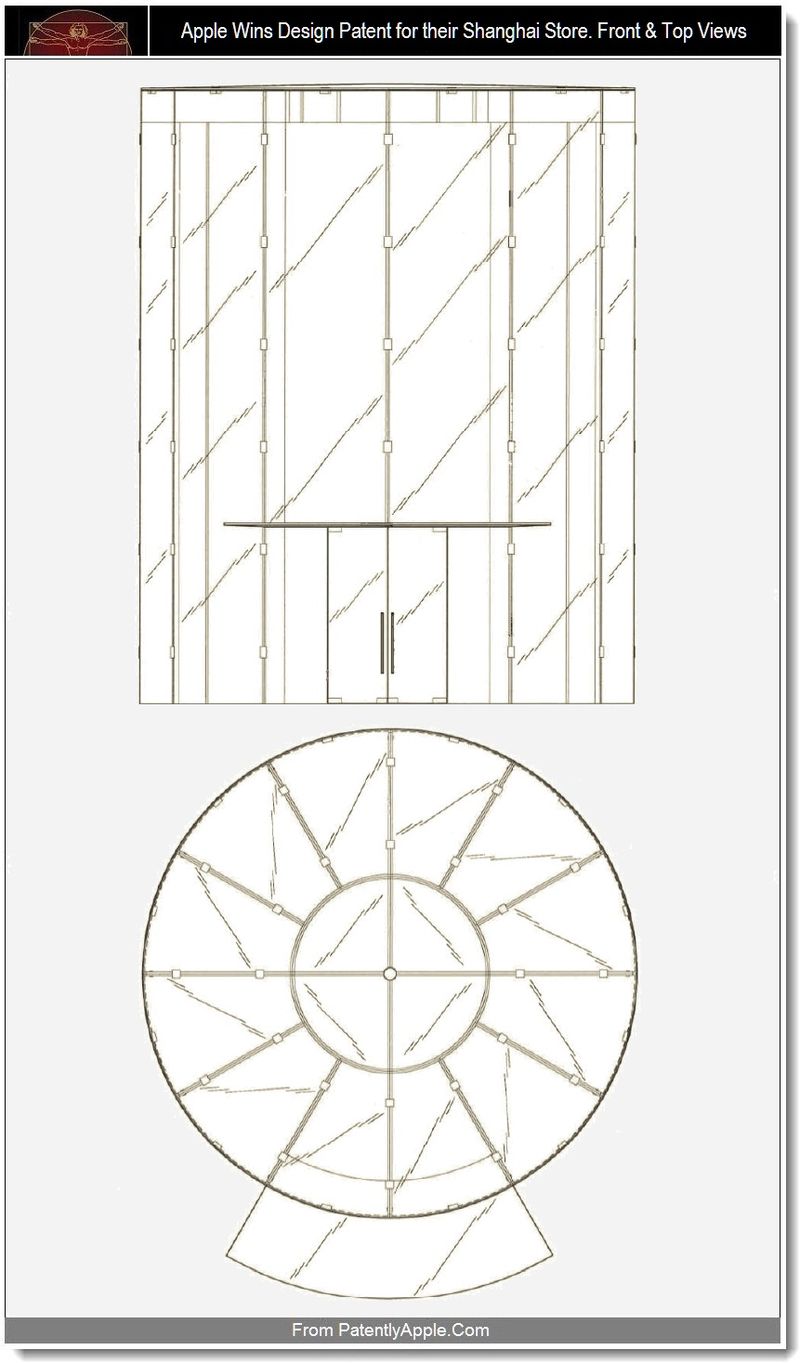 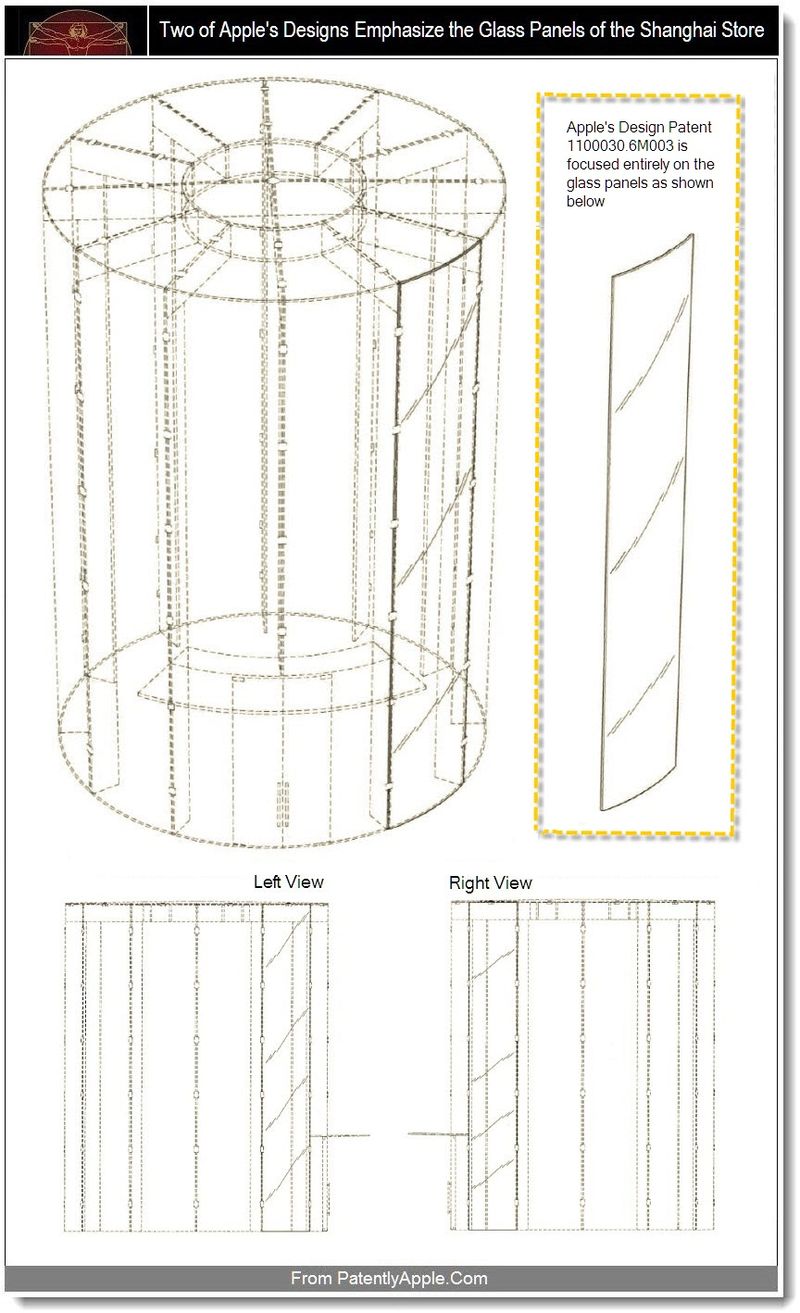 It's not uncommon for the Patent Office in China to back-fill their design-centric database with new designs; meaning, that new wins aren't always presented in a straight line sequence. This is why we missed the Shanghai Apple Store designs that were released on May 27, 2011.