Apple Wins another Multi-Touch Patent but Stumbles on Trademark

The US Patent and Trademark Office officially published a series of 18 newly granted patents for Apple Inc. today. In our first patent report of the day we covered an extremely interesting patent win relating to a super smart-pen and in our second and final patent report of the day we mainly cover another important Multi-Touch related patent which Apple could add to their extensive patent war chest. It's a little humorous that Apple has won so many Multi-Touch patents to date on a technology that altered the smart device landscape forever but can't convince the Patent Office examiners to grant them a trademark for that same technology called "Multi-Touch." Maybe Apple didn't provide the right argument in this round of their trademark battle, but the reasoning for not gaining the trademark yet, appears to be a little weak itself. So I don't think Apple will be giving up on this trademark application anytime soon - and rightfully so.

Apple has been granted another key multi-touch patent which relates to the periodic updating of baseline no-touch sensor output values to account for temperature drift. This is required to ensure a quality multitouch experience. Today's granted patent incorporates two key patents by reference: their 2004 "Multipoint Touchscreen" and 2007 "Proximity and Multi-Touch Sensor Detection and Demodulation" patents.

Apple's patent summary in-part states that the pre-stored no-touch or no-hover (no-event) sensor output values could initially be used when a sensor panel subsystem is first booted up to establish an initial baseline of sensor output values unaffected by fingers or other objects touching or hovering over the sensor panel during boot-up. This initial baseline could then be normalized so that each sensor generates the same output value for a given amount of touch or hover, providing a uniform response across the sensor panel and enabling subsequent touch or hover events to be more easily detected. After the initial normalization process is complete, the pre-stored baseline could be discarded in favor of a newly captured no-event baseline that may be more accurate than the pre-stored baseline due to temperature or other variations. 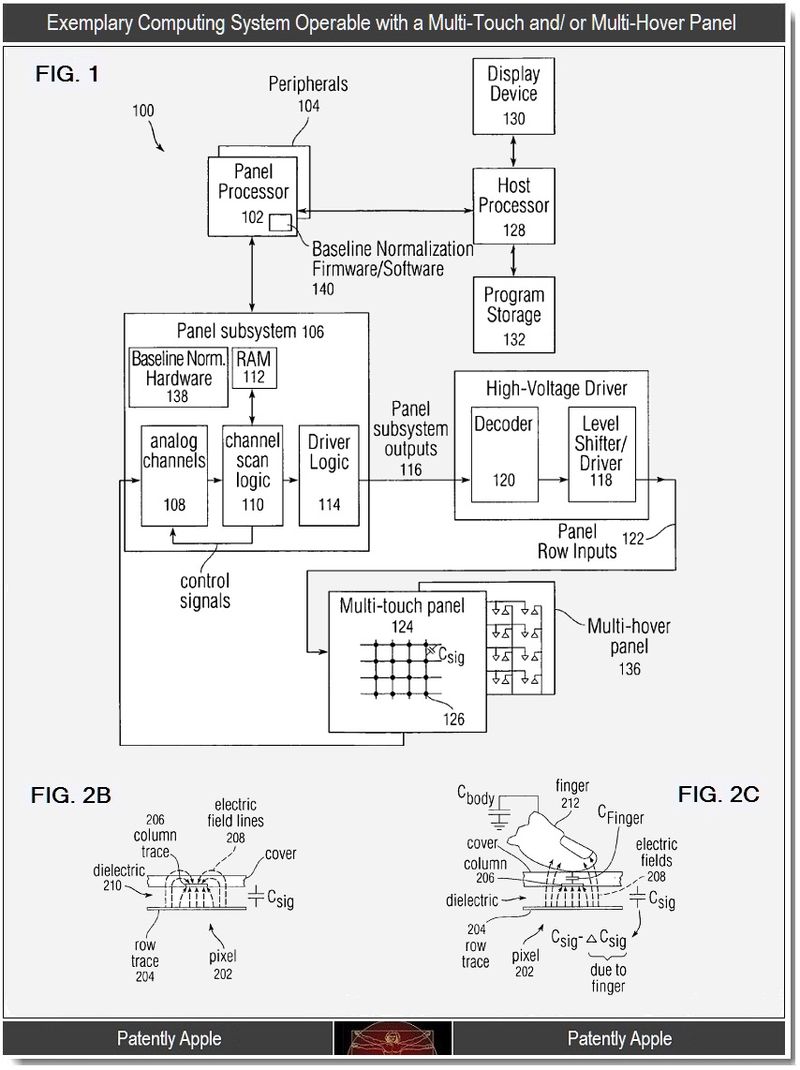 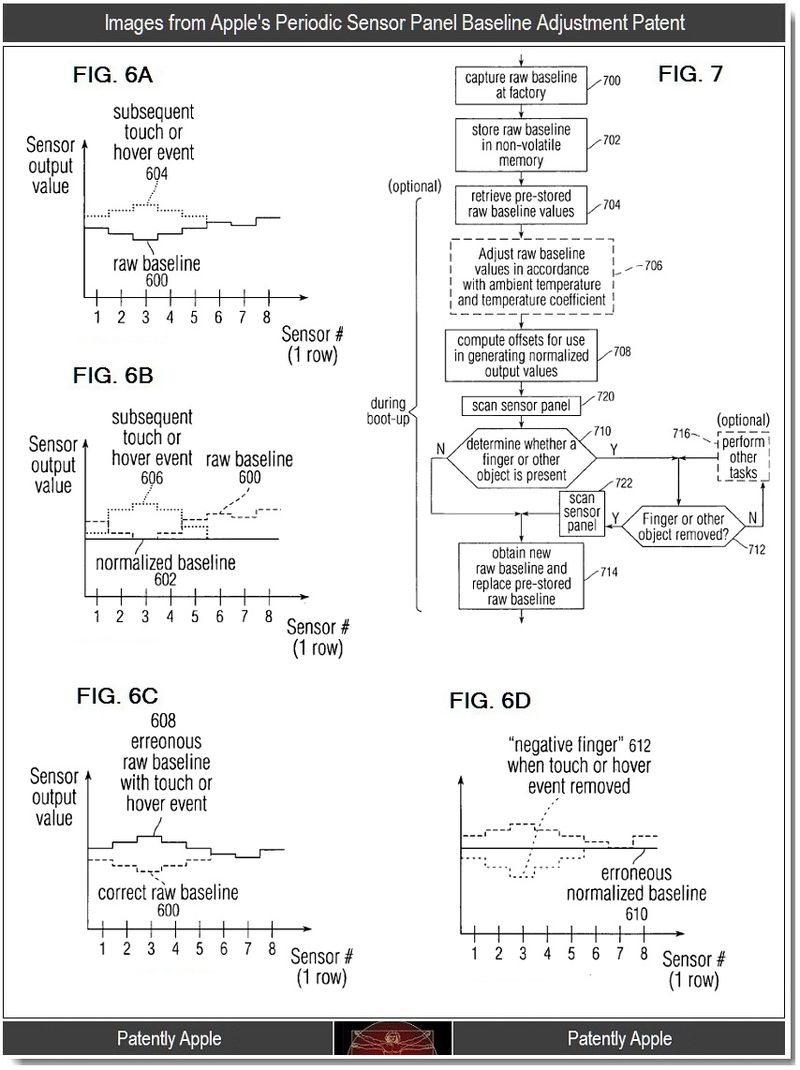 To review Apple's 32 patent claims and invention detailing, see granted patent 8,026,904. Apple credits Wayne Westerman, one of the pioneers of Apple's touch technology, as the sole inventor of this patent which was originally filed in January 2007 or six months prior to the debut of Apple's iPhone.

Apple has once again received a granted patent pertaining to multi-touch but is having a little trouble in getting their Multi-Touch trademark approved. It's clear that there's been a force behind the opposition of this trademark so that the likes of Google and others could mimic Apple's offering of Multi-Touch on iOS devices. Until the iPhone debuted in 2007, no consumer was familiar with the term "Multi-Touch" and it was Apple that established this on the iPhone before any other wannabe competitor ever had a competing product on the market.

So when the trademark board concludes with the following, it appears to be a little strange: "Thus, in view of the foregoing, and given the highly descriptive nature of the designation MULTI-TOUCH, we would need substantially more evidence (especially in the form of direct evidence from customers) than what applicant has submitted in order to find that the designation has become distinctive of applicant's services." The examining attorney's finding is that Apple's evidence is insufficient.

You want direct evidence from customers, then we'll give it to you. Okay Apple, where do we sign up? As they say: It ain't over until the fat lady sings.

Apple Wins a Patent for Device Holder for a Vehicle

Apple has won a patent that generally relates to electronic device accessories, and more specifically to cup holder adaptors. The proposed accessory is able to secure an electronic device like an iPod or iPhone inserted into a conventional cup holder. The cup holder, for example, is inside of an automobile. One embodiment of the invention includes a spool about which a connecting cable could be wound. Adapting sleeves that fit around the base of the accessory could be used to adapt electronic device holder to cup holders of different sizes and shapes.

Okay, so it isn't one of Apple's finest inventions to date but in some cases it could still be of benefit. I just don't think we'll be seeing it any time soon. But time will tell. And for those that are two marbles shy of a dozen, you don't actually put coffee in this device holder that happens to fit into a cup holder in your vehicle (ha!). 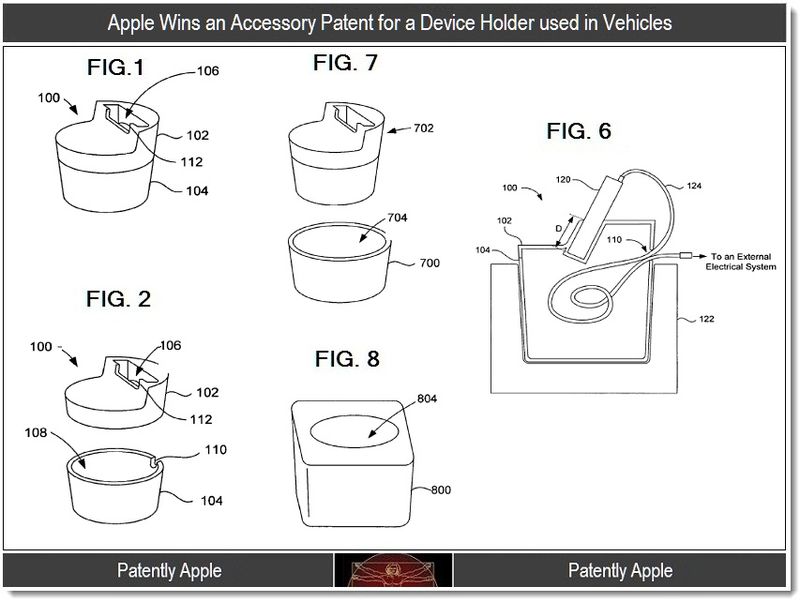 The Other Granted Patents Published Today

Thanks for your comment EvilKiru and link to that video. However, you should note that the 2006 video states that what we're seeing is an experiment. Apple's iPhone on the other hand was a real world product in 2007 using very high end acuracy controls vs. an artistic rambling of finger painting.

Multi Touch and Multi-Touch have been in common use since at least 2006. See, for example, http://multi-touchscreen.com/