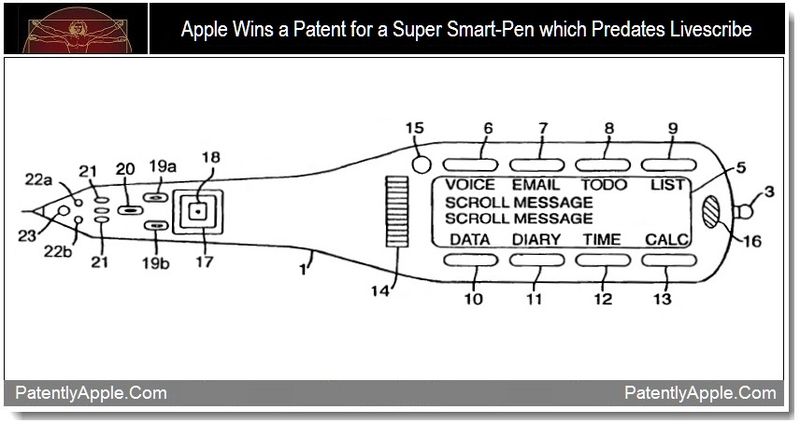 The US Patent and Trademark Office officially published a series of 18 newly granted patents for Apple Inc. today. One of the most important patents within this group is for a super smart-pen. In fact, it's so smart that it's described as being a portable computer. The smart-pen, which is noted as using an ARM processor, is also likely to incorporate recording capabilities and act as a pager, as the pen incorporates a tiny LCD. The patent notes that the device's rechargeable battery may also incorporate pyroelectricity and a custom-built solar cell. It should be noted that Apple has likely acquired this patent from a Great Britain inventor who originally filed the patent in 1998 or nine years prior to Livescribe coming to market. This is important – as a recent Apple patent application which reflects Livescribe-like capabilities is actually building on the foundation of this newly granted patent and advances the smart pen to include voice, face and object recognition modules and more. This is Apple's thirteenth smart-pen related patent since 2009. The trend illustrates that Apple is attempting to develop a family of smart pens for future iOS devices that would appeal to both the artist and enterprise user. The depth of innovation illustrated in Apple's string of smart-pen patents goes far beyond purely defensive measures.

Apple Wins a Patent for a Super Smart Pen

Apple has received a major Granted Patent relating to a smart-pen. In Apple's patent FIGS. 1 and 2 shown below you'll see a smart-pen which the invention describes as incorporating a plastic waterproof casing which uses a wax polythene to complete the seal. 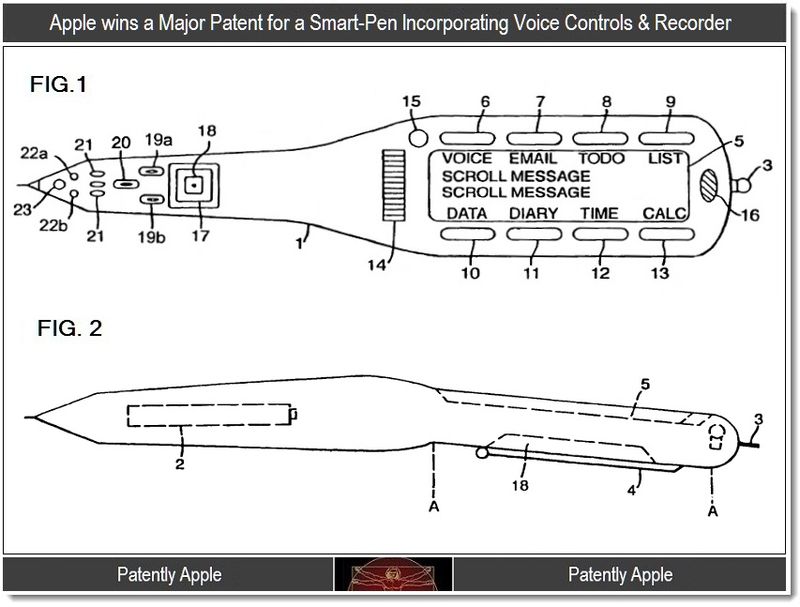 The smart-pen is described as incorporating a speech recorder capable of recording up to 60 seconds of content. The unit incorporates a built-in microphone, speaker and touch-based pause and play control functions. The smart-pen also incorporates all kinds of sensors including GPS and uniquely doubles as a pager, set with either an alarm or vibration alert. The invention further notes that when the smart-pen is docked with a device or iPhone, the smart-pen will be able to receive data by way of cellular or radio transmission and display such on the pen's display. Technically this might be able to extend to instant messaging as well. In fact, patent FIG. 1 above illustrates that the pen will also be able to present email, provide the time and assist users by playing back their own audio to-do list.

Note that the smart-pen is designed to work with iPhone and iPad-like devices which the patent technically describes as being cellular telephones and hand held PC's.

Shown below in patent FIG. 3 is a block schematic diagram of the component parts of the computer. In a preferred embodiment the document states that "an ARM processor with a larger memory is used." 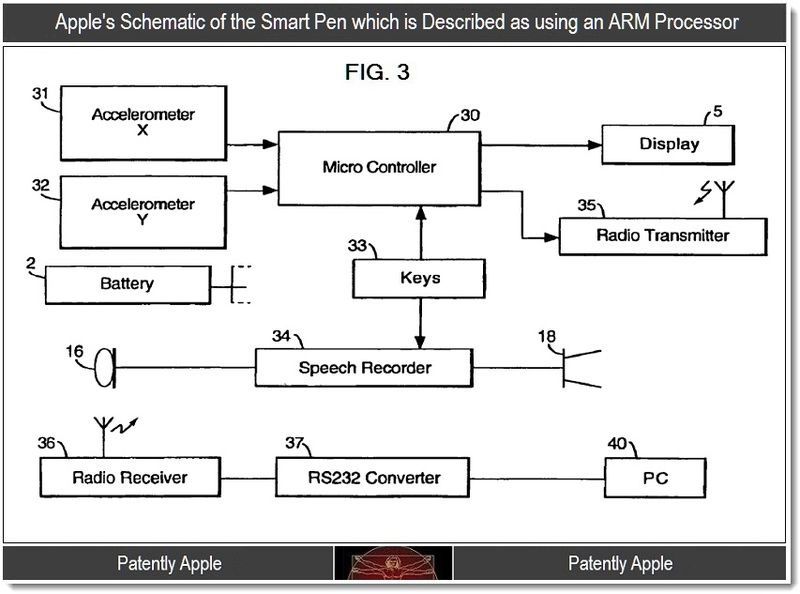 About the Device's Power Sources

As will be appreciated one of the major problems with any hand-held portable device is the use of rechargeable batteries which have a limited power life between charges. Apple's smart-pen therefore incorporates a number of power saving facilities arranged particularly to close down back lighting of the small LCD screen when not in use. 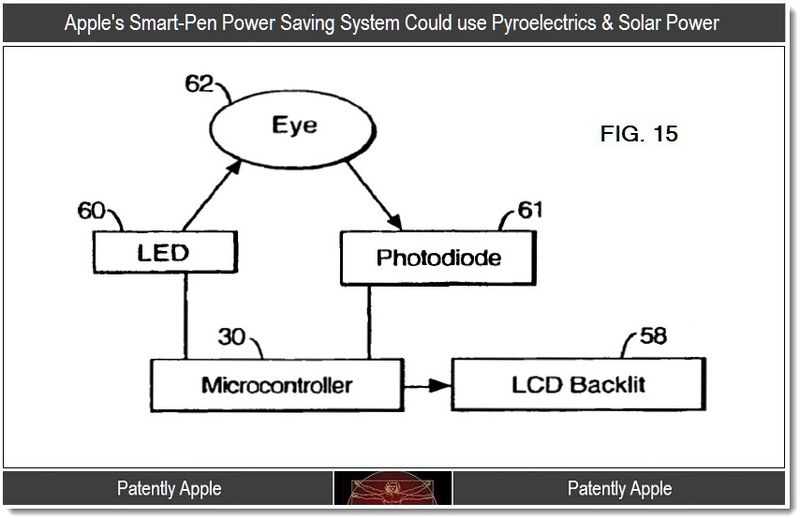 In a further implementation of back lighting power down, we learn that the system is responsive to the viewer's vision in addition to the viewer's presence. It is known that when a subject looks directly at a lens and a flash occurs blood vessels at the rear of the eyes reflect back to the camera. It is thus possible to periodically flash a low level light and to sense red reflection using a photodiode sensor. Thus as shown at FIG. 15, the microcontroller 30 periodically causes an LED 60 to pulse. At the same time a photodiode 61 is monitored and, assuming presence of a user's eye 62 reflecting light from the pulse, the LCD will remain back lit as indicated at 58. It is further noted that a custom-built solar cell (not shown) may be used to assist triple charging of the battery.

The invention's original patent filing dates all the way back to 1998 which predates the very existence of Livescribe Inc. This is likely a patent that Apple has acquired as the inventor is noted as being Hillary Williams of Great Britain. To review Apple's 71 patent claims and detailing, see granted patent RE42,738. Also see our Archives: Smart Pens

YES! LiveScribe is owned by a bunch of neanderthals! They have a strangle hold on their SDK making it impossible to CREATE your own custom templates, planners, sheets, etc.
Apple understands the end user far batter than LiveScribe ever will (For a nominal fee of course;)

Fantastic post! I've bookmarked your weblog as well considering I realized it is absolutely educational and I enjoyed reading your posts.

I'd personally love to be able to go through various Engineering problem sets that I can solve on traditional mediums and have the output reproduced on a digital device. It sure would aide in converting thousands of pages of Engineering, Mathematics, Physics, etc., work I'm actually refreshing to keep the brain sharp a much easier task to converting it to digital formats ala ePub [HTML5/XHTML1.1] and PDF to name but two.

I heard someone say to me that Apple would never design something that ugly. Yes, of course not. This is a patent application and not a design patent. What the pen is to do is the focus of this patent. Designs of devices are another application by itself and are usually found after the fact, after the product is in the market.

The idea of a great smart pen to help me doodle and write interests me. There's some on the market for the iPad and maybe they'll get better. But for now, I like the features in this patent and hope that we could get a real Apple Smartpen in the future.