A number of interesting Apple patent applications surfaced at the US Patent & Trademark Office yesterday. This report will cover three of them. The first covers Apple's ongoing research into solar energy for use with future portable devices. The second covers a new finger-oil resistant coating for iOS devices to keep our displays fingerprint free. The patent was only filed in February of this year which would suggest that this new coating may apply to devices set to be released in the coming months or years and not a technology already applied. The last patent is very interesting as well as it covers a new iPhone related antenna clip for use with an all-metal embodiment. The patent states that the patent figure is an exploded view of the device which could suggest that the antenna clip could one day be a part of an iPhone-nano-like device. Time will tell if this idea will ever fly, but it's definitely one to keep an eye out for going forward.

Background and Problem to Solve

Small form factor electronic devices such as personal digital assistants, cell phones, mobile media devices and so on have become increasingly popular in today's society. They serve as work tools, communication devices and provide entertainment, among other functions, and are often carried by hand, clip or in a pocket. Many times, a smaller form factor device will be more popular or able to demand a higher retail price than a functionally equivalent larger device.

For structural and aesthetic purposes, some electronic devices have a metal or significantly metal housing design – and this is a problem. The metal housing creates challenges to providing communication capability, such as through radio frequency (RF) or other frequency transmissions, for the device. One technique for radiating out of a metal housing is creating a plastic cutout pocket. However, this may result in a surface color and texture difference in a finished product – and something that Apple has done in the past. Another technique includes limiting the material selection of the product enclosures to materials such as plastic that are transparent to the frequencies used in communication and thereby no longer using the metal housing.

The first patent application relates to electronic devices receiving wireless transmissions and, more particularly, to providing an radio frequency (RF) radiating element in an attachment member of an electronic device. 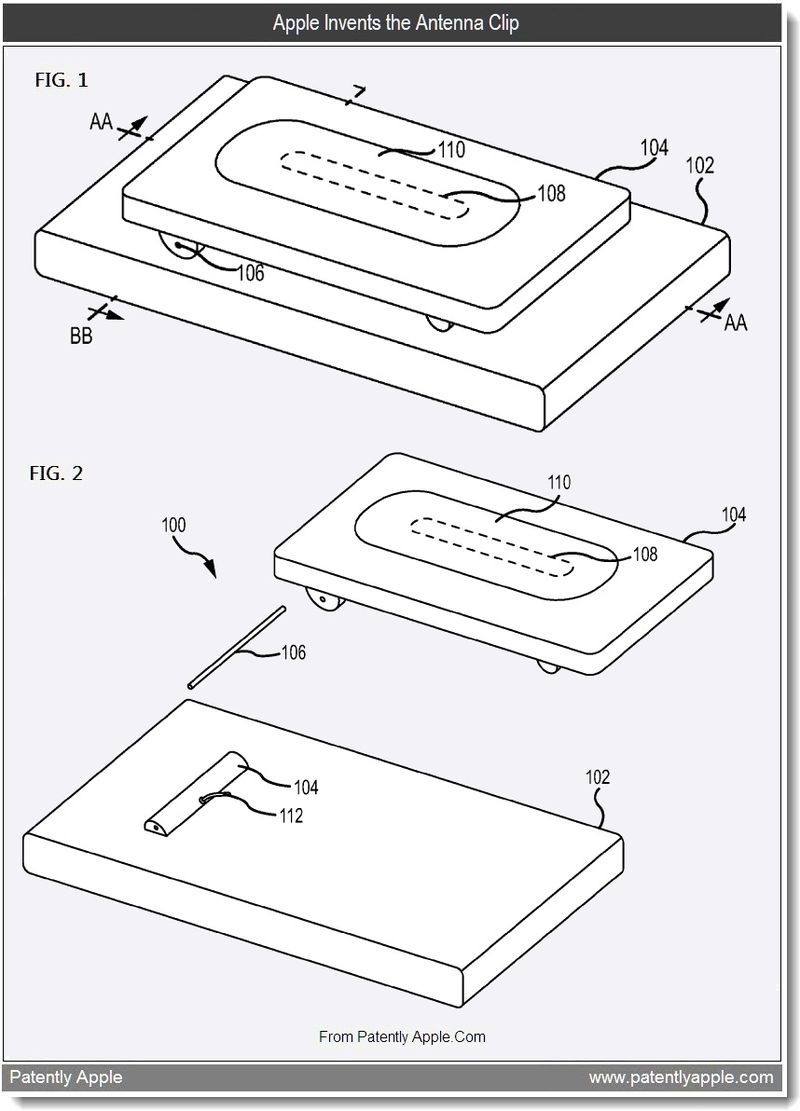 Apple states that the invention could apply to their iPod family (MP3 players), a radio, an audio/video recorder, a mobile telephone, personal digital assistant, tablet computing device, or other similar device. Considering that the patent figures represent an "exploded view" of the device, you have to wonder if this is associated with an iPhone-nano-like device. It's just a thought.

The second patent application relates to another solar power patent regarding powering portable devices from the iPod to the MacBook Pro. The patent basically covers portable electronic devices having multiple power interfaces.

Today's patent application mirrors their January 2011 granted patent that we covered under the report title of "Apple Wins their First Solar Powered Patent for Portables." 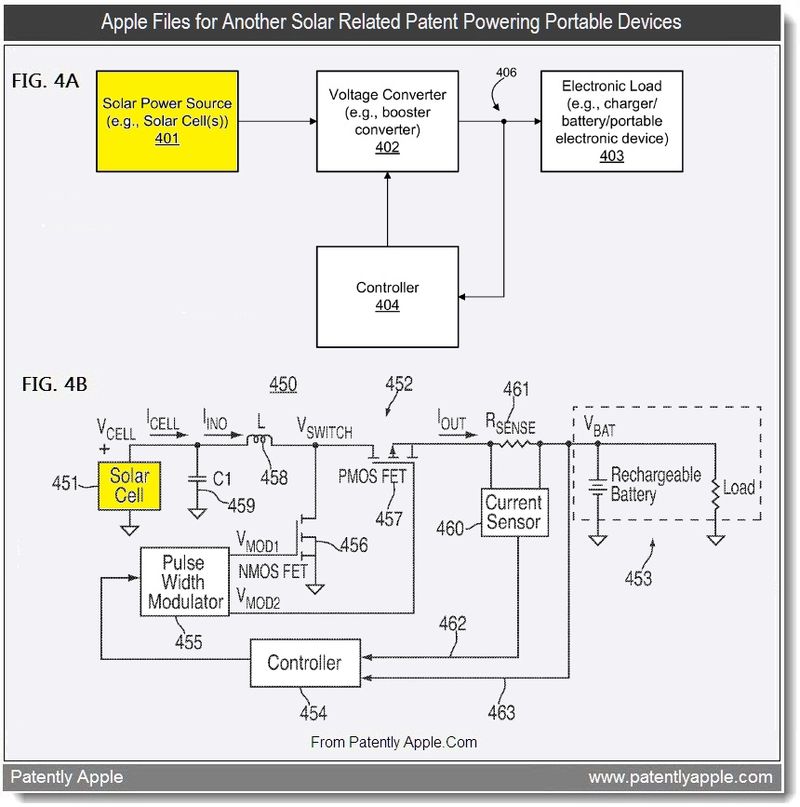 Apple's patent FIGS. 4A and 4B are schematic diagrams illustrating systems for operating an electronic device with solar power.

Other solar related patent reports: 1) Apple Thinks Green Again with Solar Cell Panels for Media Players, 2) Solar Powered MacBooks May be in our Future, 3) Apple's Vision of a Solar Cell iPhone Supports Prototype in the Wild, and 4) Apple Working on a New Power Adapter that will use Solar Energy.

The third patent application of the day relates to applying an oleophobic coating to the surface of a material. In particular, this is directed to using a direct liquid application in a Physical Vapor Deposition ("PVD") chamber to apply the coating to the material.

Apple states that to prevent the deposition of oils on an electronic device surface, an oleophobic ingredient could be bonded to the electronic device surface. The oleophobic ingredient could be provided as part of a raw liquid material in one or more concentrations. To avoid adverse reactions due to exposure to air, heat, or humidity, the raw liquid material can be placed in a bottle purged with an inert gas during the manufacturing process. 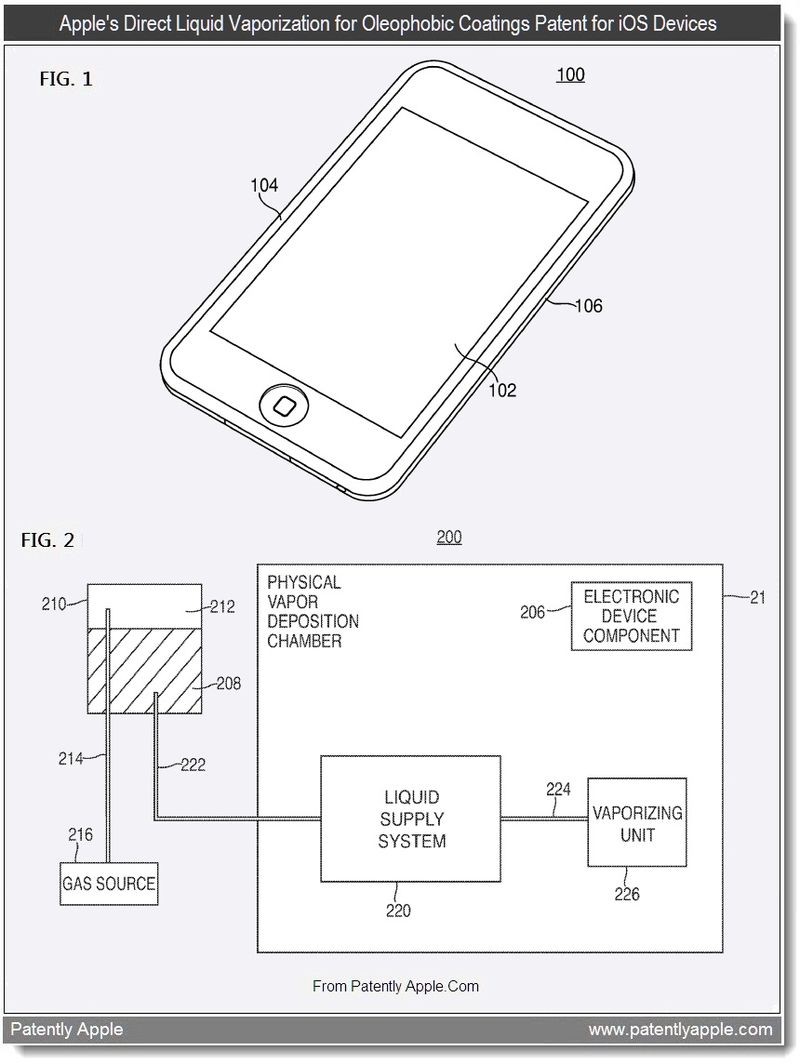 Apple's patent FIG. 1 shows a perspective view of an electronic device on which an oleophobic surface treatment is applied in accordance with embodiments of the invention; Patent FIG. 2 is a schematic view of an illustrative system for applying an oleophobic material in liquid form on a device surface.

For more details concerning this invention, see patent application 20110195187 which was originally filed in February 2011 by inventors Douglas Weber and Naoto Matsuyuki of Japan. The filing date might actually point to a new iOS device coating on the way rather than one that  already exists. Okay, that caught my attention.