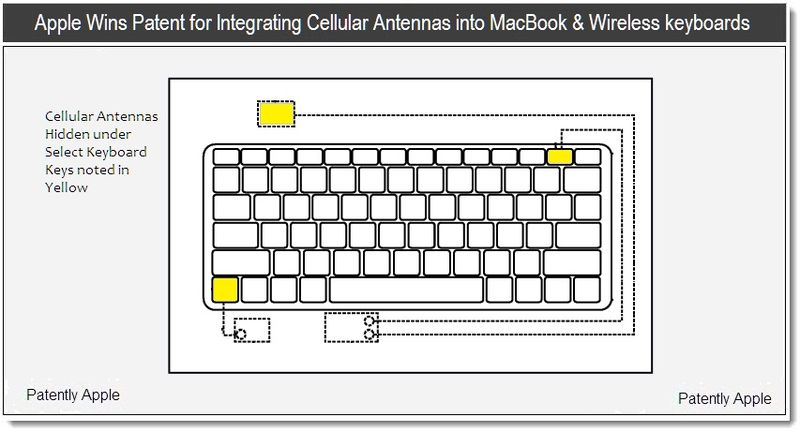 The US Patent and Trademark Office officially published a series of 20 newly granted patents for Apple Inc. today. Our first granted report of the day only covers a single major patent victory of Apple's which covers how they intend to integrating cellular antennas under the keys of both MacBooks and wireless keyboards like that used for the iMac. That revelation of cellular capabilities coming to an iMac is an eye-opener by itself. This is Apple's fourth cellular based MacBook related patent in just the last year and the second which covers hiding the cellular antenna. While we don't know which combination of technologies Apple will use to bring cellular capabilities to both the MacBook and iMac at this time, the important point is that Apple is determined to bring such capabilities to market in the not-too-distant future.

Apple has been granted their second major patent win for integrating cellular antennas into future MacBook and desktop keyboards. Their first win for cellular antennas for MacBooks was granted in September 2010. In this granted patent, Apple details how the antennas will be incorporated into the keyboard and under keyboard keys. Adding this to a desktop keyboard is very interesting news and points to yet another possible first for Apple in the months or years ahead.

As another example, device 10 may have a single multiband antenna for handling communications in two or more data bands (e.g., at 2.4 GHz and at 5.0 GHz).

Apple's patent FIG. 3 shown below shows an illustrative wireless keyboard associated with desktop computers such as the iMac. 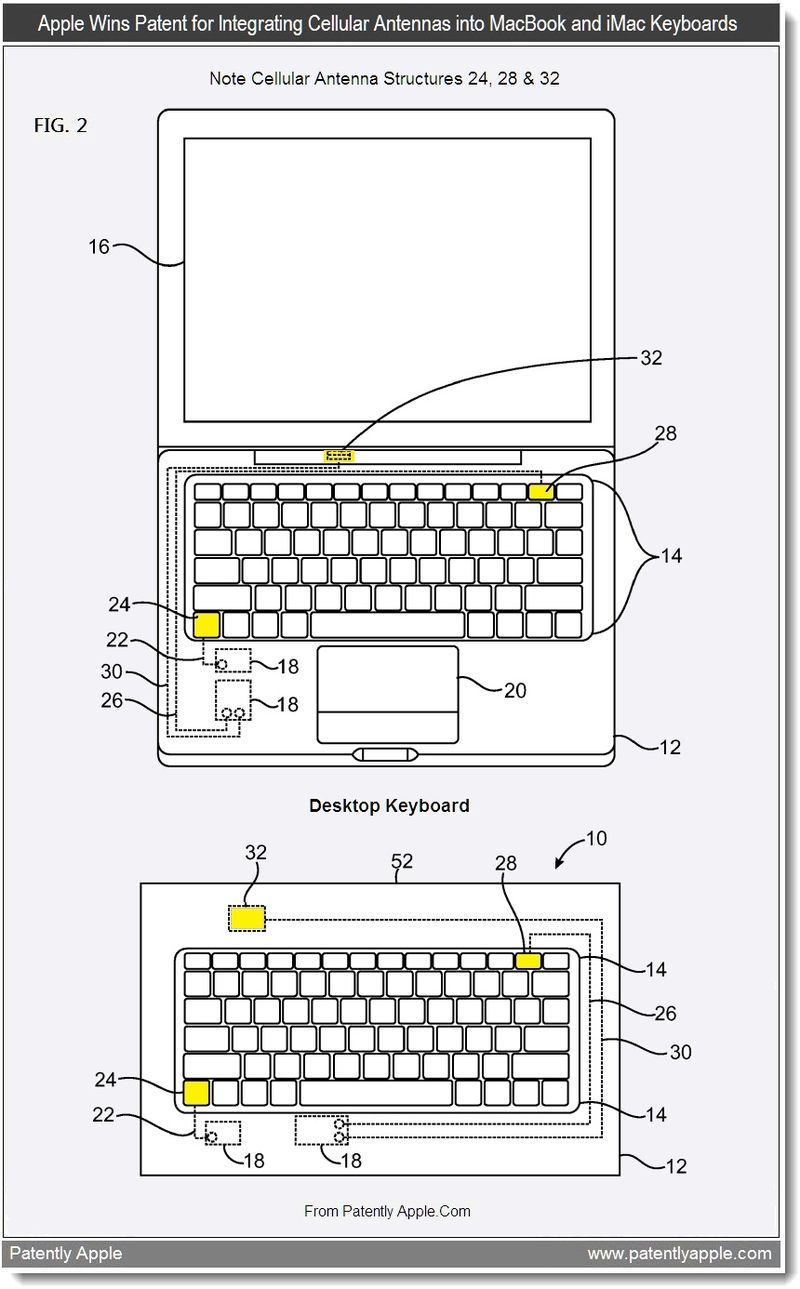 The Antennas are hidden under in Keyboard Keys

An illustrative key antenna that may be a part of a MacBook or wireless iMac keyboard is shown in FIG. 5. Antenna structure 24 may be integrated into the structure of a key that is part of a keyboard in device 10 (as an example).

Antenna structure 24 may exhibit improved transmission and reception efficiencies when the antenna structure is located away from the conductive housing of device 10 (e.g., when the key is not being pressed by a user). In this extended position, the antenna's performance may be enhanced by the increase in separation (e.g., compared to the position when the key is pressed) between an antenna resonating element in the antenna and the ground plane of the metal housing of the electronic device. 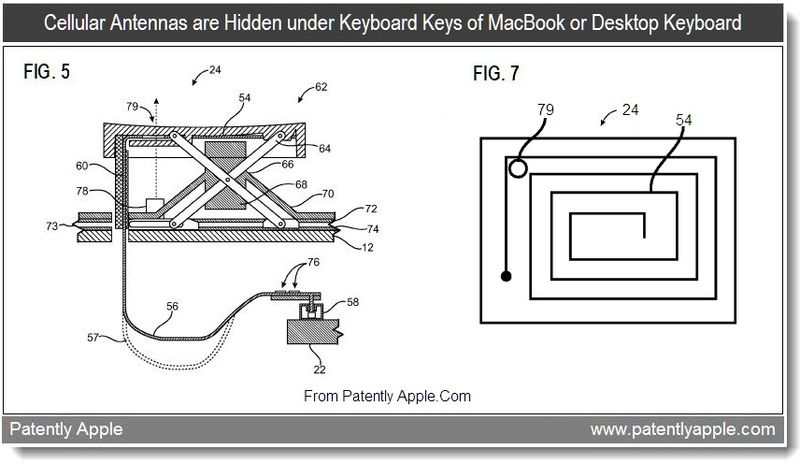 Antenna structure 24 may have a keycap such as keycap 62 that includes a representation of a key. For example, the keycap may have a representation such as "Fn", "A", "Tab" "Alt", "Ctrl", or any other key that may be represented in a keyboard or other keypad of an electronic device. With one suitable arrangement, the antenna structure may be integrated into a key that is not commonly pressed by a user of device 10 such as the print screen key. The patent's admission of a "print screen key" is interesting as this is a known PC feature and not one that I'm aware of on an iMac Keyboard.

Real-Time Information to Activate the Key based Antennas

Apple's patent FIG. 11 shown bellow shows illustrative steps involved in using an electronic device that utilizes real-time information to select which of multiple key antennas to use for wireless communications activities. The operations of FIG. 11 may be performed when the electronic device (e.g., device 10) is configured to use a diversity scheme to select a particular key antenna out of a plurality of key antennas for use in wireless communications activities. For example, electronic device 10 may use a diversity scheme in which the key antenna that has the strongest signal (e.g., the antenna that is receiving the strongest radio-frequency signal from another device) is used to transmit and receive radio-frequency signals. 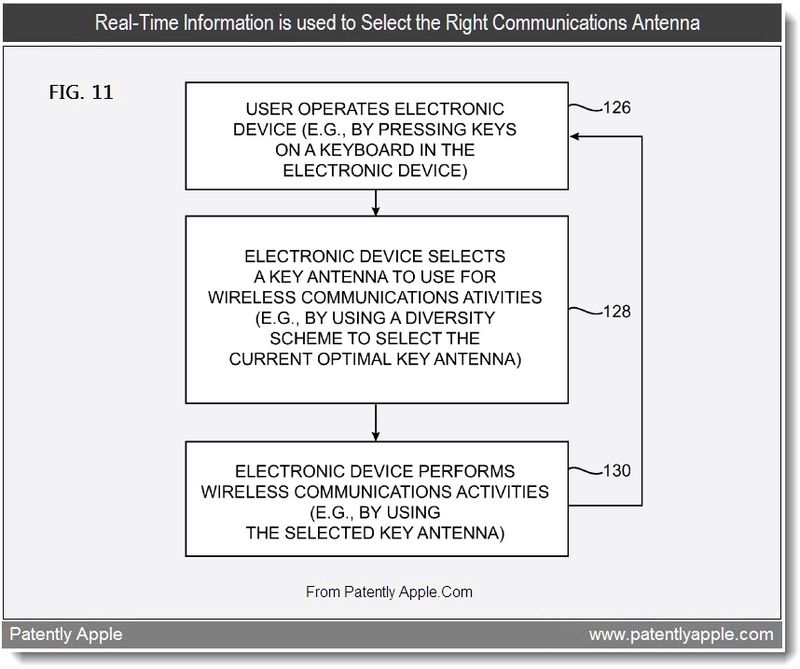 Apple credits Chris Ligtenberg, Brett Degner and Douglas Kough as the inventors of Granted Patent 7,999,748. Other related patents include: one, two and three. For interest sake, also see a prototype of one such model using an external antenna.

Patently Apple Notice: Our Comment system is experiencing some problems. Some comments that were made earlier this week or on the weekend have now been posted. We're trying to get this problem resolved as soon as possible. Thank you for your patience and we regret any comment that may have been lost in the system.

I was listening to the first part of a podcast from IGM where they basically stated that they thought patents were irrelevant. Considering that patents foretold of the iPod, iPhone and iPad I found their commentary silly. Google bought 12.5 Billion worth of patents to protect Android and Apple is fighting off Samsung, HTC, and others with patents where the stakes are high. But hey, patents are irrelevant. Patents applications from Apple have and will continue to foretell of coming trends. The cellular based MacBook is likely one of the next trends to roll out in the future. That's just a fact.

The funny thing was that the first half of the IGM podcast was drivel over their views of LCD and Plasma TV's and "Best Buy's" policies. I guess that they thought that was important. Ha, what a joke!