Apple Thinks that you'll Flip Over a Future Generation iPhone

The US Patent & Trademark Office has published a patent application from Apple that reveals one of the next chapters for Apple's iPhone. According to Apple's documentation, a future iPhone could actually sport a display on each side of the device so as to advance the richness of reading an e-book or e-magazine. In April of this year Apple revealed a hybrid e-paper and LCD display for a future iPhone and today Apple explains how a user will be able to use such a display with a new flip action mapping system. The mapping system will provide a reader with options that will easily enable them to take notes about what they're reading or view a full dictionary definition or even find related reading materials depending on which direction that they flip their iPhone. This future iPhone will also be able to be turned into unique image viewer. While this is definitely a futuristic design, we're at least getting a peek into the intial phases of Apple's research in finding the ultimate reading application for future mobile devices.

A Peek at a Future Apple e-Book Solution for iPhone

While Apple has filed a number of e-Book related patents this year, this particular patent allows us a peek into a future e-Book solution for the iPhone. The most inventive design shift of this future iPhone is that it'll sport a display on both sides. According to Apple's patent, the secondary display could be instructed to alter any visual content currently displayed as a result of a controlled movement applied to the portable media device. The controlled movement could include, for example, rotating the portable media device (iPhone) around any one (or more) of at least three predefined rotational axes.

A direction of rotation about a selected axis of rotation could be used to modify an operating state of the portable media device. For example, if as in the example presented above the user had rotated the e-book end over end but in an opposite direction (clock wise instead of counter-clockwise, for example), then instead of a table of contents being displayed, the secondary display could be instructed to present an annotation pad suitable for receiving user annotations or other comments that the user would like to associate with the particular page (or associated with a selected word, phrase, paragraph, etc. if selected by the user prior to the rotating).

Moreover, if the content being displayed is a tree, for example, then any modification of the operation the e-book (or more generally the dual sided portable media device) could be related to the fact that the tree is being displayed.

However, if the content being displayed is a magazine article, using the book protocol (i.e., showing the table of contents) would likely be of little interest at that moment to the user. However, in accordance with a magazine protocol, rotating the e-book end over end in the first direction could cause a list of related articles in that magazine or other magazines to be displayed when the rotation is substantially completed.

The eBook Reader Could Also Operate as an Image Viewer

Furthermore, when operating as an e-book, language recognition could be provided that could alter response of the e-book to movement provided by the user. For example, some languages are read right to left, whereas others are read left to right whereas still others are read up to down.

Displays on Two Sides of an iPhone to Advance Books & Magazines 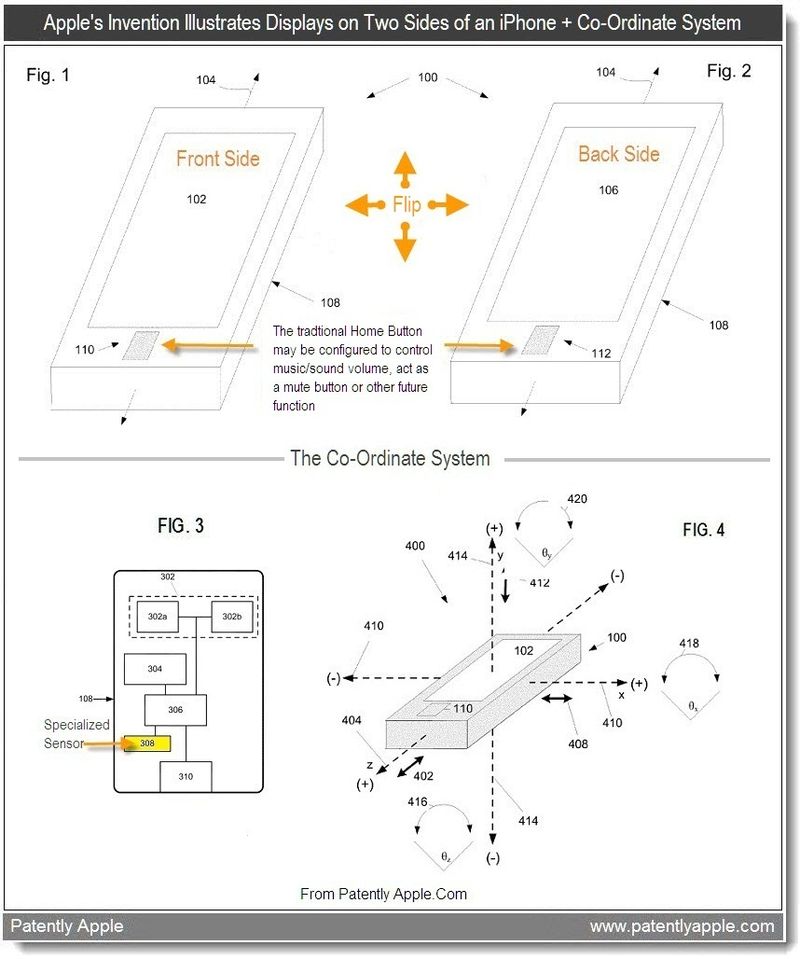 As is well known to those skilled in the art, e-book 100 could present visual content (typically textual in nature, but in some cases, graphical content could also be displayed in whole or in part) using any of a number of display technologies. One of the most common display technologies used for e-book applications rely on bi-stable display elements found in electrophoretic displays also referred to as electronic ink (or e-ink) or electronic paper.

Apple's recently revealed invention of an elaborate "Hybrid Display" back in April illustrates how Apple has been trying to figure out which way to utilize varying display types in one embodiment in the best possible way.

In the lower half of our first graphic noted above we see patent FIG. 3 which is illustrating sensor 308. This sensor will be able to detect changes in position, orientation, and/or movement and acceleration along a number of different reference directions, singly or in combination as part of the "device-centric co-ordinate system 400 in FIG. 4. In Apple's patent FIG. 7 we see display 602 presenting a current page of a book or e-magazine. Apple states that the user will be able to modify the operating state of the e-book or e-magazine in a number of ways. An e-book reader will be able to flip the device left or right, forward or backwards (reverse) to reveal various screen tool options. An e-book reader will be given the option to quickly review or refer to a table of contents, to a dictionary, thesaurus or even access an annotation pad. With an e-magazine, the user will be able to find a list of related articles or a list of articles related to the title.

Apple's specialized sensor which is part of their Co-Ordinate System is able to ensure that the device is always displaying the right screen options while allowing the user to return to the main page of their e-book or e-magazine. Without this advanced sensor to keep track of every flipping movement, trying to return to the reader's original e-book or e-magazine page would be like playing with a Rubik's Cube. This is the genius behind Apple's advanced sensor.