On August 25, 2011, the US Patent & Trademark Office published a patent application from Apple that reveals a wild new concept relating to privacy glasses. While the new specs will be applauded by both professionals and multi-player-gamers alike – gamers may get the added thrill of tapping into the specs' 3D capabilities. While we covered Apple's initial patent regarding privacy-mode viewing in May of this year, it appears as though this project has taken on dramatic new twists. As computer users shift more towards using mobile devices like iPads and MacBooks as their primary devices, and use them more and more in public spaces, privacy-viewing is going to be an essential feature for all future mobile devices. Apple is out to be first and more importantly, the best in delivering this essential new feature and/or accessory.

In some embodiment, the display could have a large viewing angle so that a user could view the information from positions other than straight ahead. While this may allow users to easily view displayed information, the information could also be visible to other people in the user's environment. When a user is displaying confidential or personal information, however, a user may not wish that the information be easily visible to all.

To prevent this, some users could place a plastic screen over the display, where the screen reduces the viewing angle of the display to a very narrow angle substantially perpendicular to the display. This approach, however, does not prevent other people behind the user (e.g., within the narrow viewing angle) from viewing the information displayed by the device. In addition, the screen could greatly reduce the amount of light reaching the user from the display, and therefore decrease the user's experience, and may force the user to sit directly opposite the display. 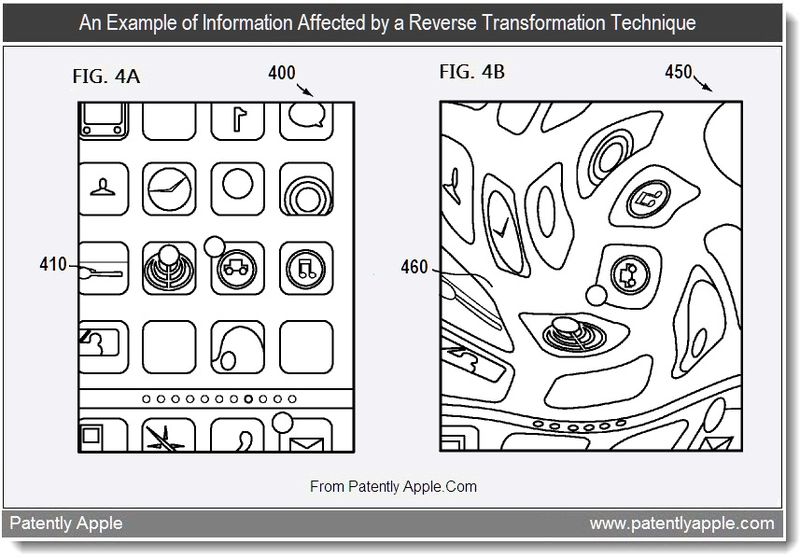 The transformation could be selected based on any suitable criteria, including for example processing capabilities and other available resources of the device (e.g., use a more complex transformation if the processor has sufficient resources and the device has adequate power), the level of security required (e.g., whether the user is in a public location), the type of filter available to the user to remove the transformation, or combinations of these.

The filter could be provided in any suitable format. For example, the filter could be provided as part of glasses. FIG. 5 is a schematic view of an illustrative filter incorporated in glasses. Eyepieces 510 and 512 could include filter elements 520 and 522, respectively. Filter elements could include the same or different components. For example, filter elements 520 can 522 could both be selected to remove a particular type of obfuscation (e.g., and be the same or different). 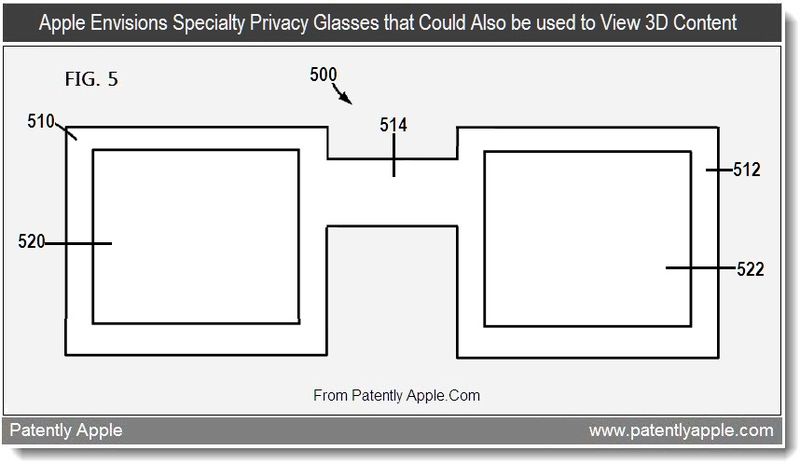 Many professionals will appreciate this advanced form of privacy, be they doctors, professors or attorneys. Attorneys are used to having their laptops open in court and the ability to apply varying privacy-mode techniques to hide thier information from prying eyes would be appreciated.

Alternatively, each filter element could be selected to remove a different type of obfuscation. This approach could be desirable, for example, if displayed information is provided as two offset images providing three-dimensional content (e.g., two obfuscated images are provided simultaneously and obfuscated differently, where the images are offset to correspond to three dimensional content).

The filters could be constructed from any suitable material and include any suitable treatment to remove obfuscation. For example, the filters could include optical or other treatments to remove particular types of obfuscations (e.g., color-based, frequency based, or polarization-based) on a transparent or translucent material. The treatments could include, for example, coatings (e.g., color or polarized coatings), embedded particles in a material, treatments to the structure of the material (e.g., molecular structure or alignment of material particles), movable optical components (e.g., movable reflectors directing light through different regions of the filter), or combinations of these. The particular treatment selected for a filter could depend on any suitable criteria, including for example the type of obfuscation used by the device.

Although Apple's patent doesn't spell it out, I'm sure that privacy glasses could also be designed like snap-on sunglasses so that those with prescribed lenses could take advantage of this technology. Considering that one of the primary user or target groups for this invention would be business and professional users, with many being over the age of 40, the need for a snap-on type of glasses would be very high. I'm sure that there's going to be a lot of room here for third party developers to get involved and creative so as to meet varying needs in the market for this type of accessory.

According to Apple's engineers, the electronic device could require an initial setup for associating a user with a particular filter or with particular properties or attributes of a filter (e.g., the un-obfuscating capabilities of a filter). For example, a user could provide authentication information, and provide information identifying one or more filters to associate with the authentication information. If a user does not have or does not know the particular attributes of a filter, the user could direct the device to attempt several obfuscation techniques, and provide an input indicating whether the filter is effective to un-obfuscate the particular technique used. This trial and error approach could be continued until one or more suitable techniques (e.g., techniques that obfuscate information but are un-obfuscated by the filter) are discovered.

The Invention Could Also Apply to Multi-Player Games

In Apple's patent FIG. 6 below we see a schematic view of an illustrative display having two distinct regions obfuscated in different manners. Display 600 could include first region 610 and second region 620, where information is displayed in each region. In some embodiments, the particular information displayed in each of the regions could be different, and associated with different users of the device. For example, regions 610 and 620 could each be associated with hide users' battleship boards in a battleship game, where each board includes ships 612 and 622, respectively, and shot markers 614 and 624, respectively. 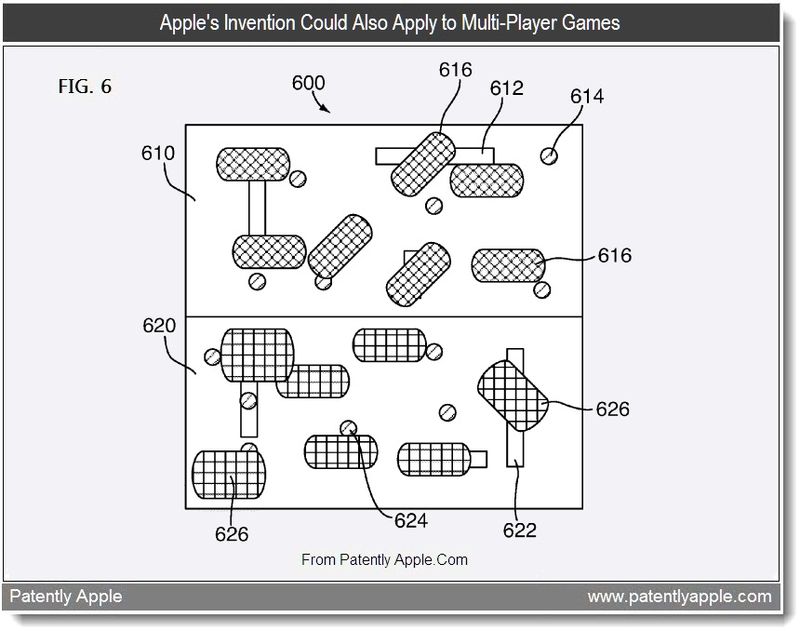 Although elements 616 and 626 are shown to be discreet elements, it will be understood that any suitable approach could be used to obfuscate the regions of display 600, including for example adding discrete elements to a display, changing display characteristics of the display (e.g., refresh rate, color spectrum, or polarity), or combinations of these. Using an appropriate filter, each user could view his region of display 600 without the elements 616 or 626, and thus view the underlying information, but may not be able to view the underlying information in the other region of the display. This could ensure privacy in a multi-user environment.

In some embodiments, the electronic device could instead or in addition adjust the viewing angle of regions of the display. The viewing angle for each region could be oriented away from the center of the device, and in some cases could change dynamically to follow a user's position relative to the display (e.g., follow the user's head). In some embodiments, several regions could each be associated with several viewing angles so that different users could simultaneously view different information privately on the display. 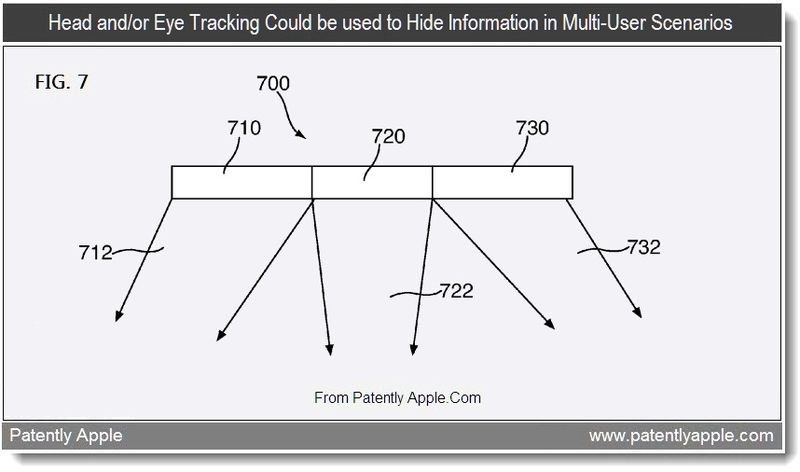 Using the approach of FIG. 7 above, several users could view and interact with different content simultaneously (such in the gaming scenario outlined in FIG. 6 above). In particular, each of the several users could position themselves within respective fields of view 712, 722 and 732 to view the information in corresponding regions 710, 720 and 730.

Applies to General Applications as Well 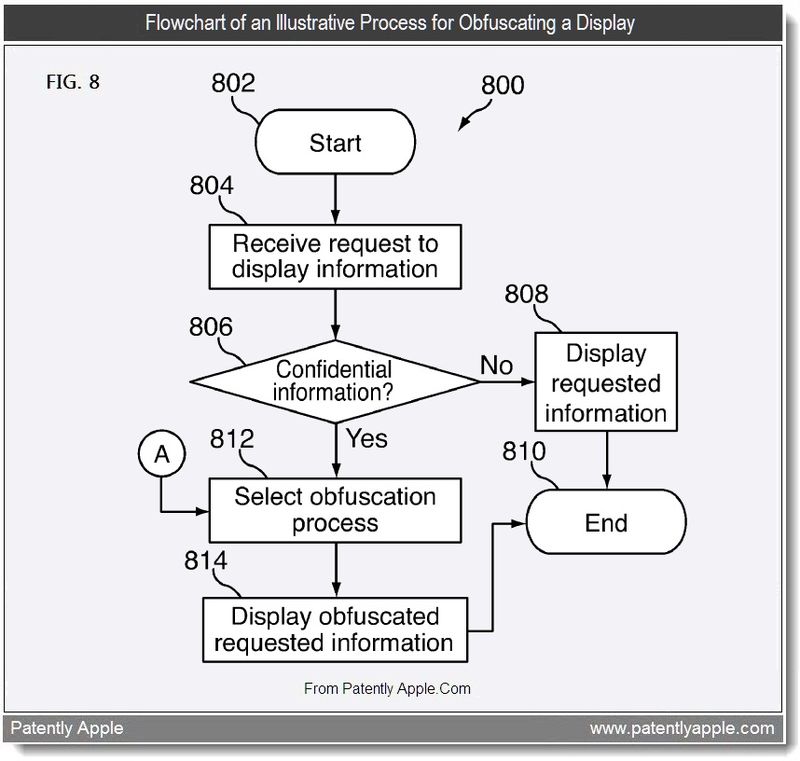 Although the invention is primarily aimed at iOS devices like the iPhone and iPad, it could also be applied to Apple's MacBooks and iMac consumer computers – if not a television, considering that the patent points to a plasma display as one option. Of course that's where playing Multi-Player Games would rock. 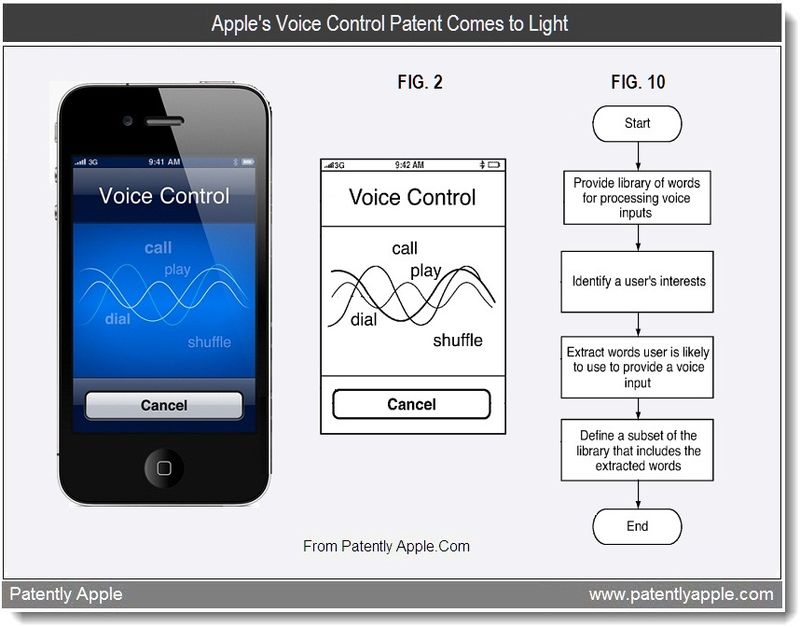 Apple's Voice Control patent application surfaced today under number 20110208524. The patent graphic as you could see above matches the real-world Voice Control iPhone feature graphic. While voice control is now functional on the iPhone for making calls and interacting with iTunes, the patent hints that voice controls could expand into other user interests such as exercise, financial transactions, subscriptions, calendars and television shows. The latter would suggest that Voice Controls may be coming to Apple's Remote. Whether these new voice control features will be expedited with the use of Siri and Nuance technologies is unknown at this time. 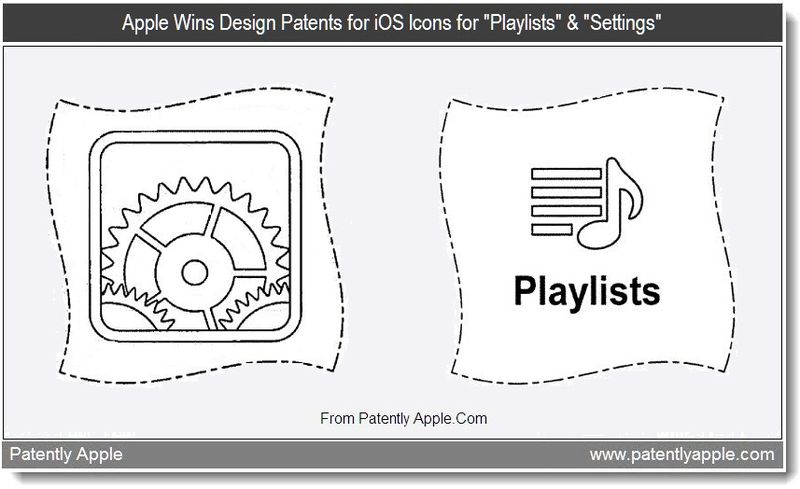 Apple has been granted two iOS Icon designs for "Settings" & "Playlists." The information about these granted patents didn't surface until very late Tuesday or early Wednesday of this week. They're usually published early Tuesday morning. Write it off as holiday delays.

I've had a few people ask me why I didn't write anything about Steve Jobs today. Answer: Apple's Steve Jobs has been elected to Chairman of the Board and is working hard on mapping out Apple's future ... as always. Tim Cook has been doing 70-80% of the job as CEO already, so there's no surprises here. If Steve leaves Apple in the future, that'll be a different matter. For now, I'm sure that he wants Apple and all of us to keep pushing ahead. He needs the rest and reduced schedule and now he'll have that.

All the Best Steve
Jack