Apple Focused on Advancing iOS Metaphors to a Higher Level 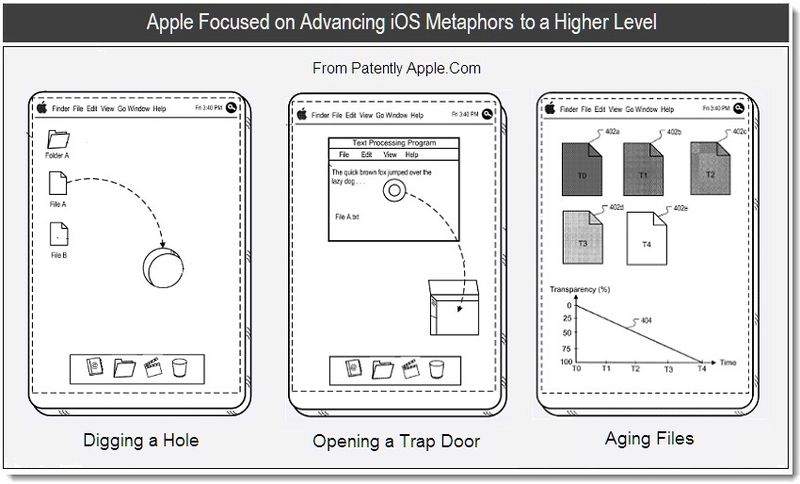 On August 11, 2011, the US Patent & Trademark Office published a patent application from Apple that reveals one of the possible next chapters for Apple's iOS. Apple's patent application focuses on advancing iOS metaphors to a higher level. In this application we see that Apple is working on new ways of working with a 3D user interface. One example shows us that a user will be able to creatively design a hole, tunnel or even a trap door in their UI that could send files to their work or home office like a portal in seconds. In the not-too-distant future, a user will be able to shred documents on their iOS devices by simply using a new shredding gesture. And if that wasn't enough, users will be able to one day create 3D objects with a simple finger gesture. Considering that OS X Lion just introduced iOS-like features into our desktop experience, we're likely to see some of these future metaphors spill over to our desktops as well. Just when Apple's competition thought that they've safely figured out how to copy the iOS experience, we see that Apple is preparing to take iOS to the next level. It's back to the drawing board for iOS copycats and I doubt that any of us will be losing any sleep over that.

Conventional personal computers include operating systems that often provide a virtual "desktop" metaphor where users could manipulate and organize various graphical objects. This metaphor is easily understood by users because it is intuitive and relates to their real world, physical environment. Modern computing devices, such as smart phones, often provide a large variety of applications. Some of these applications, however, provide interfaces that lack an equivalent of the "desktop" metaphor and as a result are more difficult to comprehend by the average user.

Apple's solution is to present a series of new metaphors into the iOS ecosystem that will better reflect the mobile working environment going forward.

Example Interactions Digging a Hole in a Device User Interface

Apple is always looking for new ways to distinguish iOS from the pack and today Apple introduces us to a number of new GUI gestures and metaphors that are fun and Kooky – if not creatively insane. The first one describes the notion of "digging a hole" in your interface that will allow you to drop a file into it quickly or act as a garbage bin or other uses.

In Patently Apple's graphic below you'll find a series of three illustrations representing the phases related to the digging a hole gesture. It begins with FIG. 1 touch inputs 110 corresponding to a digging gesture made by a user. The user provides touch inputs 110 at a location on an iOS device's interface. A digging gesture could correspond to a user positioning his or her finger (or stylus) at a particular height above device 100 on the z-axis, and moving his or her finger down along the z-axis and to the side in the x-y plane.

Alternatively or in addition, the digging gesture could correspond to a scraping motion, e.g., one or more short gestures substantially in the x-y plane that mimic scraping at the display with a fingernail. In response to one or more touch inputs (110), the user interface displays a graphical representation of an opening in the user interface. 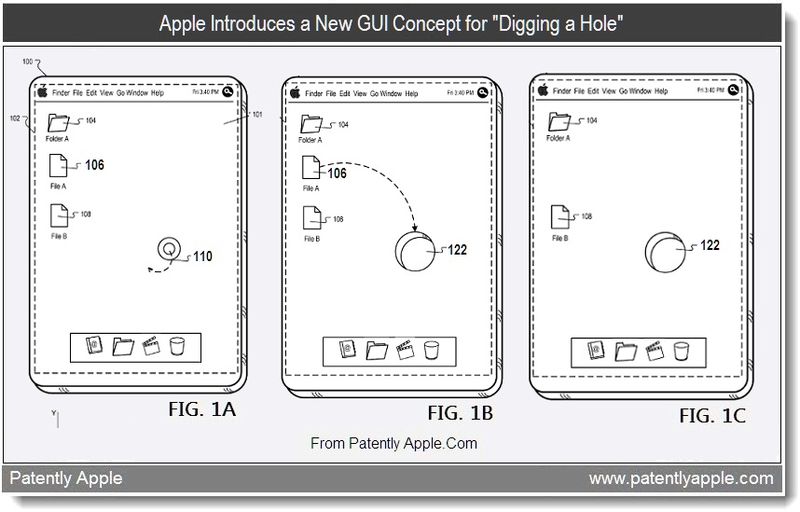 Uses for Creating a Hole 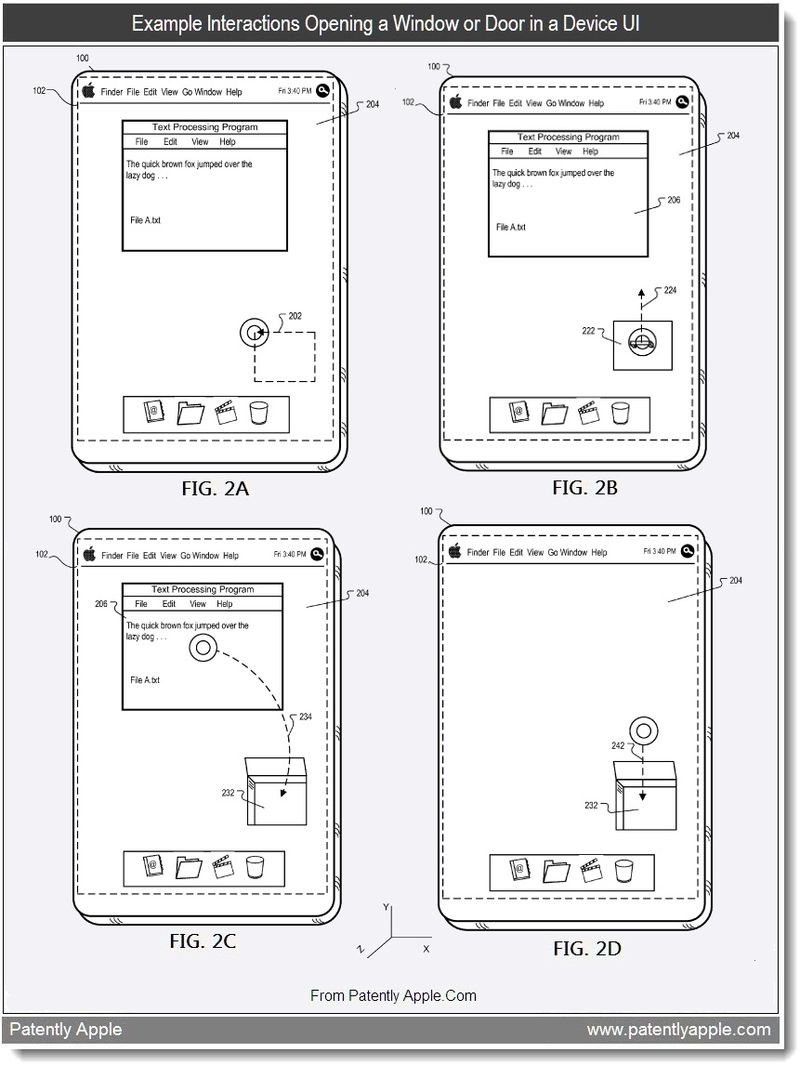 Apple's patent FIG. 2B illustrates an example graphical representation of trap door 222. The trap door has a size and shape corresponding to the pattern drawn by the user with touch input 202. The touch input corresponds to a rectangular pattern; therefore, the trap door is rectangular. However, other patterns, for example, circles or squares, could also be drawn, resulting in different shaped representations. Trap door 222 is initially illustrated as being closed.

As illustrated in FIG. 2C, a user drags and drops the file (object 206) into the trap door. It works very much like the hole in the first example. 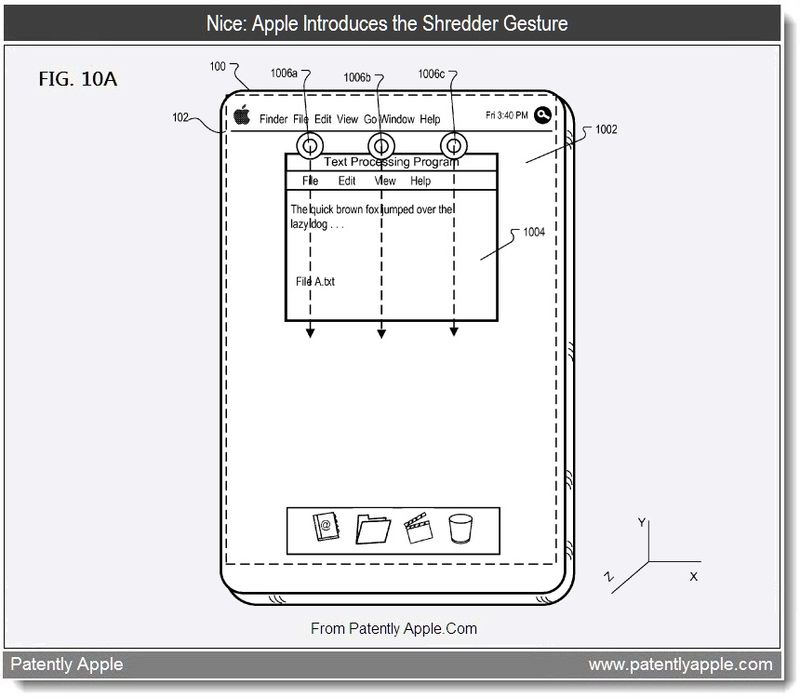 For illustrative purposes, touch input 1006 is illustrated in FIG. 10A as corresponding to three fingers providing a swiping input in the y-direction. However, a different number of fingers and/or a different swiping direction could also be used.

Apple's patent application 20110197153 was originally filed in Q1 2010 by inventors Nicholas King, Todd Benjamin and Brett Bilbrey who were also responsible for a second patent application on this subject which introduces a few more new gestures in the works, as shown below. 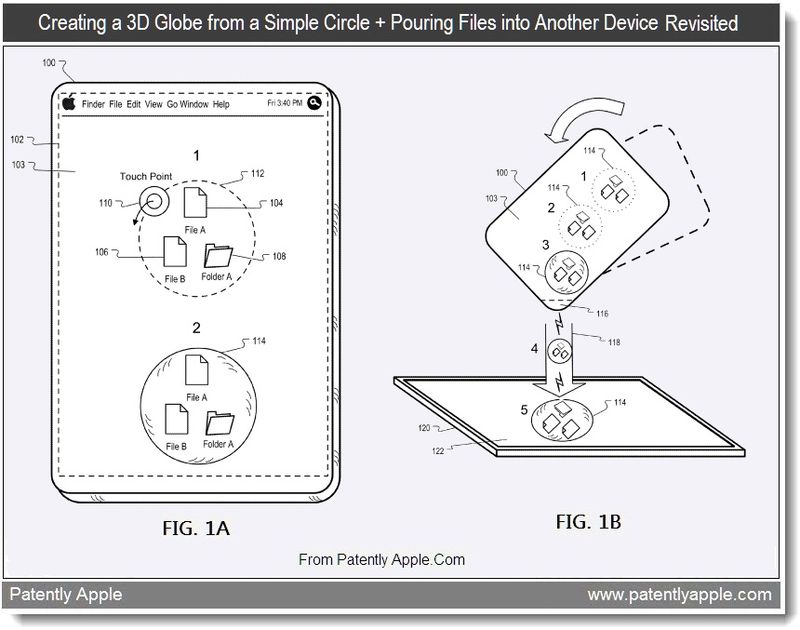 In some implementations, the GUI 103 could include one or more two or three-dimensional graphical objects. In the example shown, graphical objects are file icons 104, 106, representing files "A" and "B" and folder icon 108 representing folder "C." A user could interact with icons 104, 106, 108 using various inputs. For example, touching file icon 104 could result in file "A" being opened in user interface 103. Graphical objects could represent any type of data or content, including but not limited to files, folders, digital photos or videos, audio files, ebooks, etc.

In Apple's patent FIG. 1B we see the iOS device of FIG. 1A transferring the graphical object 114 to a second device, proximate to the first device. This was first detailed in our July patent report titled "Apple Wants to Beat HP's WebOS Sharing Feature with Something Cooler." The files could be transferred using Bluetooth, WiFi, RFID or the like.

In our last graphic below, we present patent figures 3A, 3B and 4. In patent FIGS. 3A and 3B we see an example process for sorting graphical objects 300 based on size (mass). In the example shown, graphical objects 300 (e.g., file and folder icons) could be sorted in the UI based on their size (mass). The iOS device could be placed in a state so that graphical objects 300 are detached from the UI and "float" on the UI as if under the influence of real world, physical forces, such as gravity, friction and drag. A sort function could be invoked by a user. Invocation of a sort function could be a touch or motion gesture, or any other desired input.

In the last example of the day, we see patent FIG. 4 illustrating an example process of visually indicating the age of data represented by graphical objects. In the real world material objects age over time. For example, a material object may lose its color, shine or elasticity, start to rust, etc. In some implementations, graphical objects 402 representing data could be adjusted visually to indicate to a user the age of the data using this "aging metaphor." 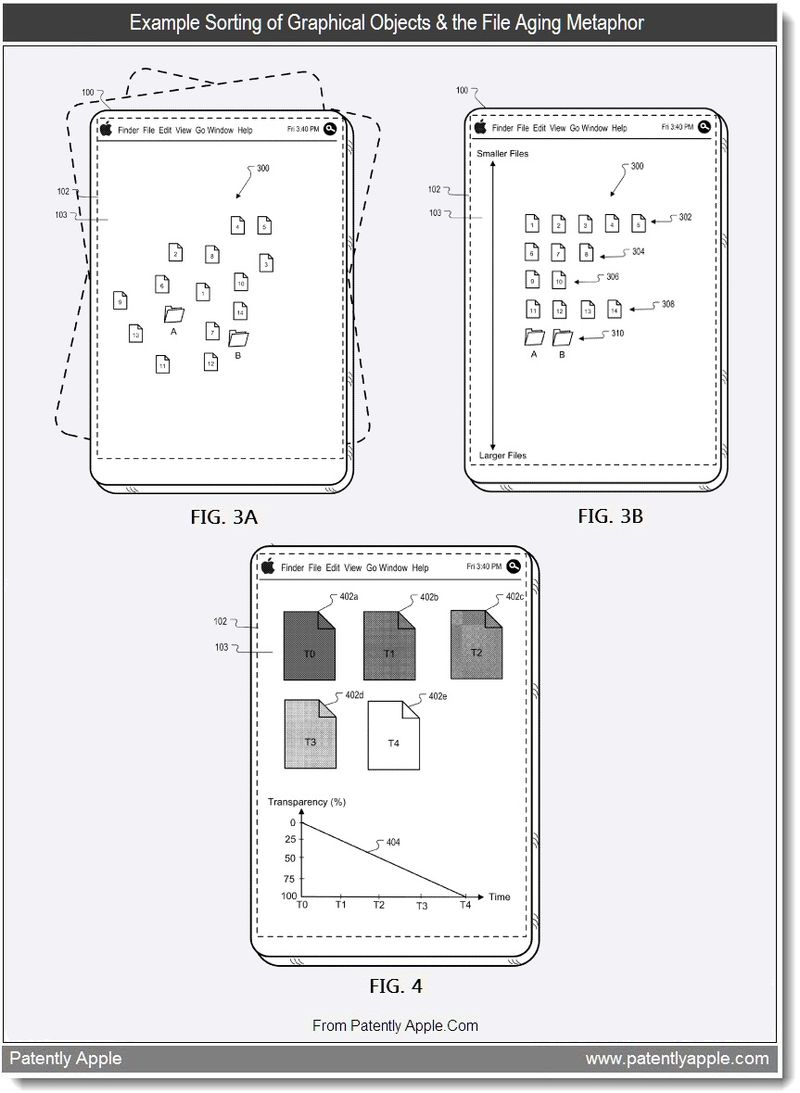 All in all, we see that Apple is working on refreshingly new metaphors for future iOS implementations. And remember that with OS X Lion utilizing some of iOS's methodologies, we may very well see some of these new metaphors landing on our desktops at some point in the future as well.

What I find Android disgusting is it redefines little (if not nothing) other than the price, and innovative mostly on how to profit from user. Certainly it is good for customer, yes, as good as software piracy. Really hope that Google think out or more likely buy some innovative companies to make Android different.

Notice the iPad shape but the windows all have OSX like GUI - top menu bar. Hints at OSX IOS hybrid? Or perhaps a MacBook pro with a touchscreen?