Last week the US Patent & Trademark Office published a patent application from Apple that reveals one of the next chapters for Apple's iBooks. For children's books, Apple has devised a number of new gesture options to make reading more fun and interactive. One such gesture will allow a child to tap on a word and have an associated picture, animation or video pop-up to make that word come to life. For those learning a foreign language, Apple has devised a gesture to have a word present itself in the student's native language so as to quicken the learning process. Apple's ideas also seem to cross over to electronic magazines where tapping on certain words could pop up a related widget. For example, when reading a financial magazine article on Apple (AAPL), tapping on its NASDAQ symbol would automatically open a financial widget showing Apple's current stock price. Yet where Apple's patent application really shines is in its description of a new chip that future iOS devices could end up adopting. Our report reveals the nature of this little wonder that could definitely add a little zing to future iOS devices.

The Next Chapter for iBooks

Apple's patent application describes systems, methods, and techniques for interacting with text displayed on a touch screen, such as text in an electronic book ("ebook" or in Apple's case, "iBook"). Apple states that by interacting with the text, a user will be able to obtain information related to the content of the text. For example, the text could be augmented with information not shown until a user interacts with a corresponding portion of the text, such as by using touch screen inputs in the form of gesture input or touch input. 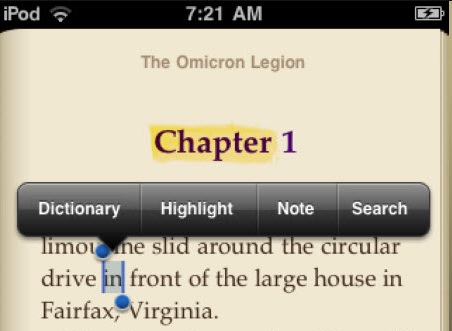 Today, an iBook could present readers with a simple options bar with Dictionary/Highlight/Note and Search as noted in the graphic above. But the next chapter for iBook will go far beyond the basics.

Apple states that future iBooks will allow users to call up images, animations, interactive content and video content to provide a better understanding of a word, phrase or item and so forth. Additionally, a reader will be able to have portions of the text read to them if they so choose.

This could be a very handy tool for those trying to learn another language, for example, as it will also be able to present readers with "grammatical information" about a portion of text or present the source or history of portions of the text as well as pronunciation.

Another contemplated feature will allow a user to press and hold a beginning and last word in a phrase which will invoke the presentation of media content regarding the phrase as shown below.

When it comes to searching a "Noun" or "Verb" a reader will be able to call up media to clarify its meaning. A still photo may be called up for nouns and an animation could be called up associated with a verb. To make it even more interesting, if not downright fun for the reader, Apple is considering the ability to include interactive content such as a game, an interactive two or three-dimensional illustration, a link to other content and more to make learning fun.

The use of Finger Swipes

While iBook will always provide a standard way of using an iBook, they also want readers to be able to assign new iBook functions according to their needs and have them perform in the way that they feel is more practical for them. Apple will give readers the ability to assign gestures like swipe, press-and-hold, tap, double-tap, flick, pinch, multiple finger tap, multiple finger press-and-hold and finally press-and-slide – to control the way information is presented to them.

At one point, Apple's patent application took some interesting side-twists. One of them appeared to be discussing something beyond just a book as it was describing actions more in tune with an interactive magazine. Examples included the ability to touch a word like "soccer" and have an interactive soccer game pop-up; or touching the word "AAPL" to pull up a stock quote; or touching the word weather and having a weather widget pop-up; or touching the name of a song and having a music app pop up and play a clip from that tune; or touching a "minus" or "divide" word (or symbol) could pull-up a calculator widget and it goes on through to even pulling up a TV program if a word is associated with that.

These aren't normal functions for most books and so it appears that some of the functionality that Apple's patent is describing may very well have a spill over affect into a plethora of online magazines for any niche of infotainment including music, an interactive TV guide and beyond. I mean think of it: Once these new found iBook principles and functionalities are established, why stop at magazines, right? These new capabilities could apply to electronic versions of corporate brochures and/or Annual Reports and far beyond the confines of books or magazines.

That's when you realize that what Apple is creating here has the power to change everything from comic books to indoor mall maps. Yet how will an iOS device assist a user with an indoor mall map when GPS doesn't work indoors? Well, that's where the second twist in Apple's patent application comes into play.

New and Unique iOS Hardware May be on the Way

When it came to describing various components that this future iOS device could utilize, it listed all of what you'd expect – a communication system for the iPhone (GSM, EDGE etc), all manner of sensors including biometric sensors and a gyroscope and so forth. But then there was an unexpected surprise. Apple briefly described the inclusion of a hybrid positioning system using a combination of satellite and television signals from a company called Rosum Corporation. Whether that example was used to identify a generic type of chip or that particular company's chip isn't known at this time. But the technology that the Rosum Corporation developed is definitely worth noting. In Q1 2010 Rosum Corporation and partner Siano developed a revolutionary location and synchronization solution for indoors and urban environments.

Bloomberg covered this breakthrough by stating the following: "The breakthrough chip opens up a multitude of new commercial opportunities by enabling femtocell synchronization and location, tracking of people and assets, and localized advertising over mobile TV devices in deep indoor locations such as shopping malls, hotels, campuses and factories with seamless delivery leveraging broadcast TV signals. The ALLOYT client combines the ALLOYT chip with a high-sensitivity A-GPS chip into a tightly-coupled hybrid TV-GPS solution which works across all types of environments: rural, suburban, urban, and indoor. Broadcast TV signals enjoy a 100,000x power margin advantage over GPS, and this extends location and synchronization capabilities deep into buildings and urban environments."

Obviously the technology and feature-set associated with this new chip are able to support several new features discussed in Apple's patent application. However, the potential of such a chip being integrated into future iOS devices has implications that go far beyond iBooks and the purview of this report. One thing is for sure; the addition of this type of technology could definitely bring a powerful combination of live TV and/or advanced indoor-GPS capabilities to future iOS devices and take them to the next level. In fact, an observant fan of ours emailed us this morning to link this technology with one that we recently covered concerning new "vicinity sensors." Could the Rosum chip be one of the those behind a future "vicinity sensor? Time will tell. 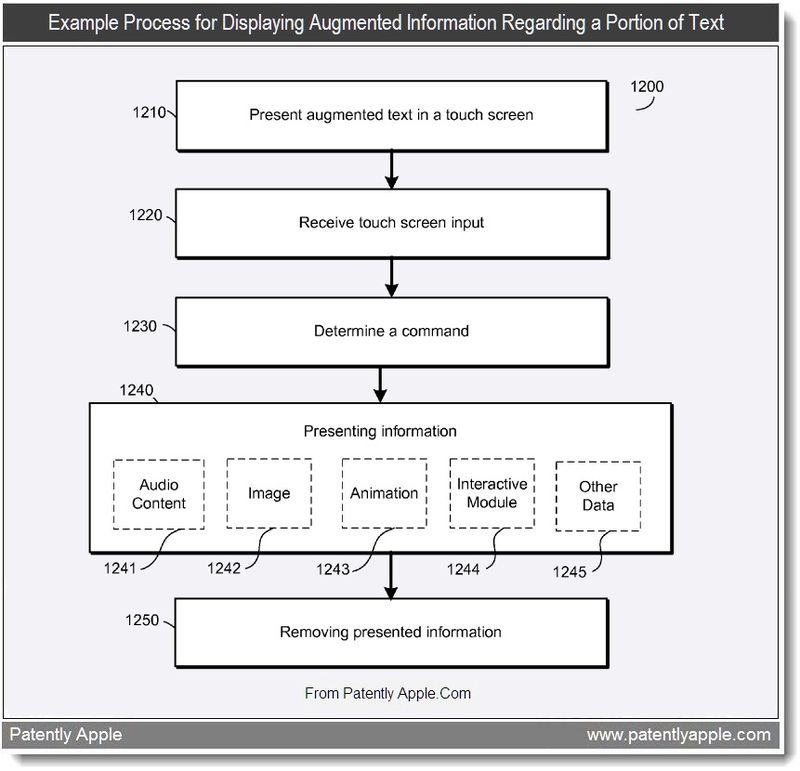 Apple's patent FIG. 12 shown above shows an example process for displaying augmented information regarding a portion of text.

Great! They patented the tech behind in-text advertising.

Maybe outfits like Vibrant and Kontera will become less profitable and disappear when Apple begins to demand license fees.

This would be great for my learning to read toddler!

This puts a new light on one of your other recent reports:

Seems that they've been doing trials in the UK this year too:
http://www.afterdawn.com/news/press_releases/press_release.cfm/4530/rosum_corporation_announces_successful_dvb-h_positioning_trial_in_collaboration_

So it's possible we'll see this in the iPhone pretty soon, being as Global Locate's been linked to two of the previous iPhone GPS chips.

This technology first surfaced in 2006 for Homeland Security: