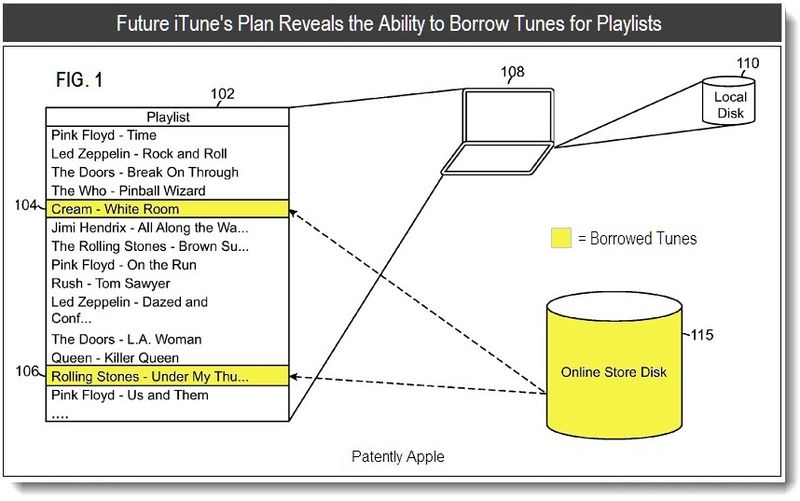 On June 24, 2011, the US Patent & Trademark Office published a patent application from Apple that reveals one of the next chapters for Apple's iTunes. Apple's revelation pertains to a new elaborate system that will essentially allow users to borrow tunes on a limited time basis before asking them to buy the tune or have it erased from their playlist. When you understand the principles behind Apple's coming Music Match system for iCloud, then you could easily see how Apple could implement this proposed borrowing system. Apple will be able to scan and monitor each tune's time limit on your devices. The music industry needs to get more tunes into more users devices and the old marketing systems of yesteryear aren't delivering as they should. While Apple's proposed borrowing system is definitely a big marketing gamble for both Apple and the music industry, it could also be one of the most ingenious marketing moves in recent times.  Report Updated with news of a new shock dampening mount for hard drives.

Aiding consumers in their discovery of new media is highly desirable to many consumers as well as content providers. Currently, the primary mechanisms for discovery of media items are (1) recommendation services, and (2) broadcasting (radio, commercials, and movie trailers). Each of these mechanisms can be inadequate.

Recommendation services frequently suggest media items to a consumer based on other media items that other consumers have browsed, sampled, or purchased along with browsing, sampling, or purchasing other items. For example, a user might be listening to a song in an online store or on a media playback program; an associated system informs the user of other items that the store considers similar based on an analysis of other users' actions. While this type of system is beneficial, in that it can recommend new media items based on media items that the user might know they already enjoy, it suffers from the drawback that the sampling of the media item is limited. Frequently, the user cannot listen or watch the entire media item to decide if they want to purchase the media item.

Broadcasting methods can allow a user to experience a substantial portion of a media item and better aid a consumer to make informed purchasing decisions. This is especially true with respect to audio items, which are frequently played in their entirety by radio stations. However, radio stations rarely select songs for a specific user making much of their content poorly suited for a given consumer. Additionally, broadcast mediums frequently play many items that are already owned by certain consumers and continue to repeat the same items, thus failing to educate the consumer.

Accordingly, a system is needed that can introduce consumers to new media items that are tailored to the consumer's taste, yet give the consumer the ability to experience a sufficient portion of the media item so that they can make an informed purchase decision and also limit the royalty exposure of the service aiding the user in the discovery of new media items without charging a fee.

The following relates to creating playlists having media items derived from multiple sources, wherein one of the sources supplies media items that are not stored on the same device as the media player playing the playlist. In some embodiments, the user does not own or possess title to or have more than limited privileges to use or listen to the media items from a second source under the U.S. intellectual property laws.

In some embodiments the system includes an online store such as iTunes which keeps a record of the media items in a user's media library, regardless of the original source or point of purchase of the media items and supplies media items that are not stored in a user's local library for inclusion in the playlist. A user can create a playlist from which the system can choose one or more seed tracks which the user does not possess in his/her local library and include these tracks into the playlist. 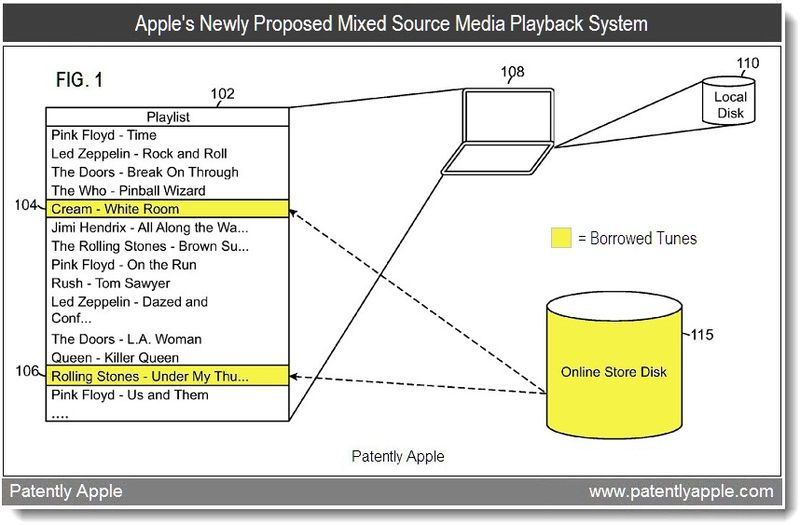 Apple's Next Level for iTune's Genius

Alternatively, a user can create a playlist using a playlist algorithm like the iTune's Genius algorithm which can create playlists based on one or more seed tracks by selecting songs that are relatively similar to the seed tracks. A user can also load a playlist created from Apple's iTunes Essentials, or a friend or some other source. Regardless of how the playlist is generated, the media player can play media items that are located on a local disk from the local disk and download and play other media items from a remote source (think another user for iCloud).

A Limited Offer that Expands Based on a User's History

Meaning: if you borrow songs from iTunes for a playlist and in fact end up purchasing a great number of those tunes, then the system will allow you to create more and more lists over time. If on the other hand you borrow tunes and never or rarely buy the borrow tunes, the system will keep your list making ability to a minimum. The starting point, according to the patent, is a generous 50% of a created playlist. If you have a 50 song playlist, in theory you'd be able to expand that by borrowing 50 tunes for the iTunes library.

The patent states that a slider or other user interface control or programmed restriction can be provided to allow the user to retrieve a percentage of music in their own library to play compared to that of music from the secondary source.

In some embodiments, the methods and systems described in the patent application provide mechanisms for encouraging the purchase of media items from iTunes through tune discounts or other offers for other media items.

I think this idea has the power to really shake up the market and advance iTunes sales. What are your thoughts on this? Let us know.

A final patent application of note is that of 20110149502. The application describes methods and systems for damping physical shocks to portable computer storage devices. Whether Apple is thinking of selling a new external hardrive or simply modifying Time Capsule is unknown at this time. Yet what's interesting about this patent application is that it actually presents us with a photo of their shock dampening mount. Photos are a good sign that Apple's engineers are at least in the protype phase. 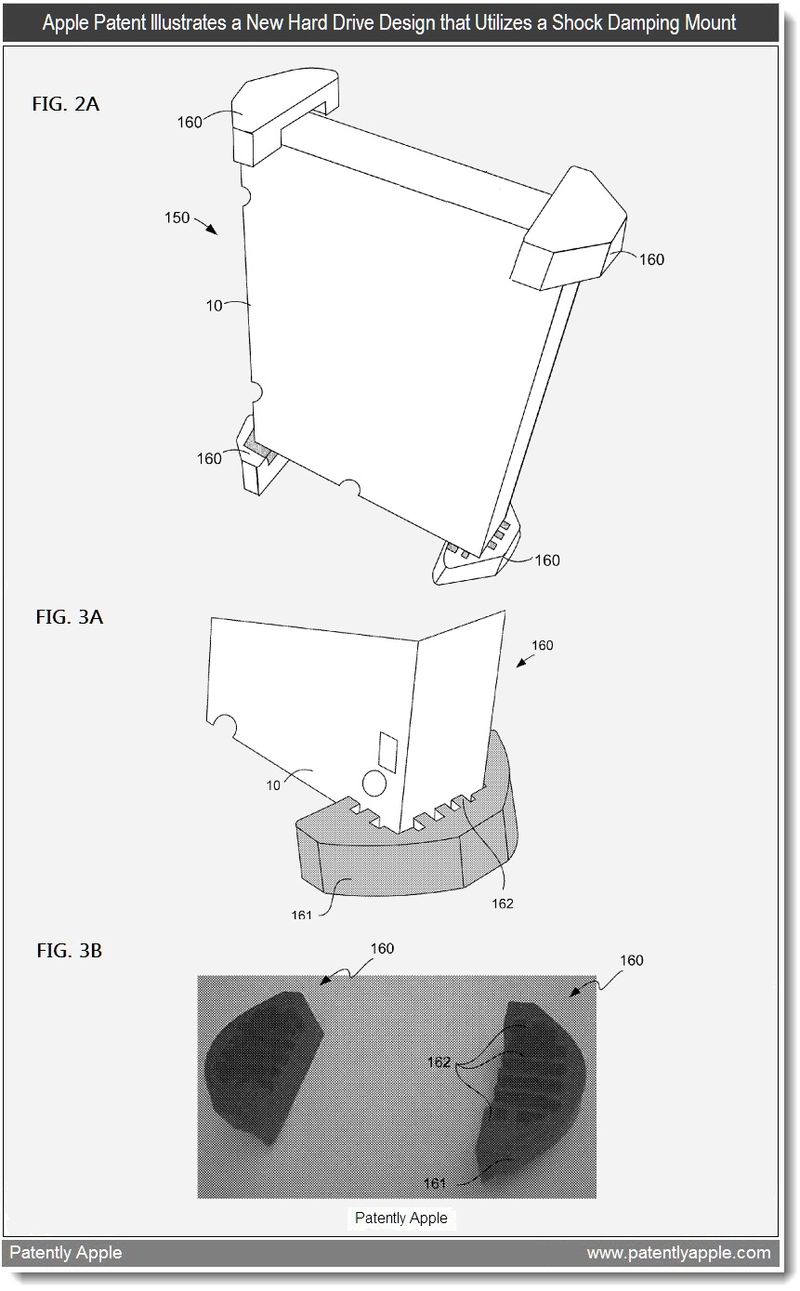 The question here is how the local database and the server database (May be iCloud) will be in sync if I have multiple devices connected at the same time.

Maybe record companies could pay Apple for the chance to promote new singles like this.

I hate being limited to hearing a new tune for 30 seconds. I've been burnt a number of times. This is very cool and I'd appreciate that ability. Two thumbs up.