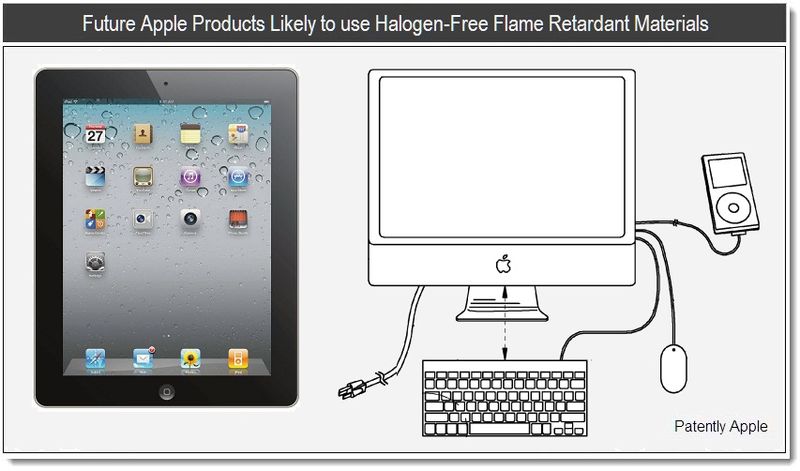 On June 16, 2011, the US Patent & Trademark Office published a patent application from Apple that reveals a newly advanced halogen-free flame retardant material that is likely to be integrated into the manufacturing of Apple products like keyboards, mice, iPods, the iPad, cabling and more. Apple's invention provides for a halogen free resin composition that includes at least one thermoplastic polymer, an inorganic filler and a flame retardant additive that is described as being "self-fire extinguishable."

It has been estimated that about 10% of fires are caused by electrical faults of wiring and electrical equipment, and that these fires account for 19% of fire-related injuries. Some plastics are inherently resistant to fire, such as polyvinylchloride (PVC). However, PVC is not suitable for many electronics applications. Only about 12% of plastics used today contain flame retardants. An increased use of flame retardants would improve the safety of electrical wiring and electronic devices, and therefore reduce the number of fires caused by electronic devices.

Apple's proposed invention provides halogen-free flame retardants, resins that include halogen free flame retardants, and plastic components made from such materials. In some embodiments, the invention relates to a composite resin molded article having excellent flame retardancy, electric insulation properties, and crack resistance, and produces only negligible amounts of toxic substances during incineration, if any at all.

In some embodiments, a flame retardant resin is provided that does not include carbon black. The resins are therefore widely applicable to the fields where colored products are desirable, such as products where appearance has commercial significance. Examples of such products include personal electronic devices, such as personal computers, laptop computers, cell phones, personal digital assistants, tablets, electronic games, and the like.