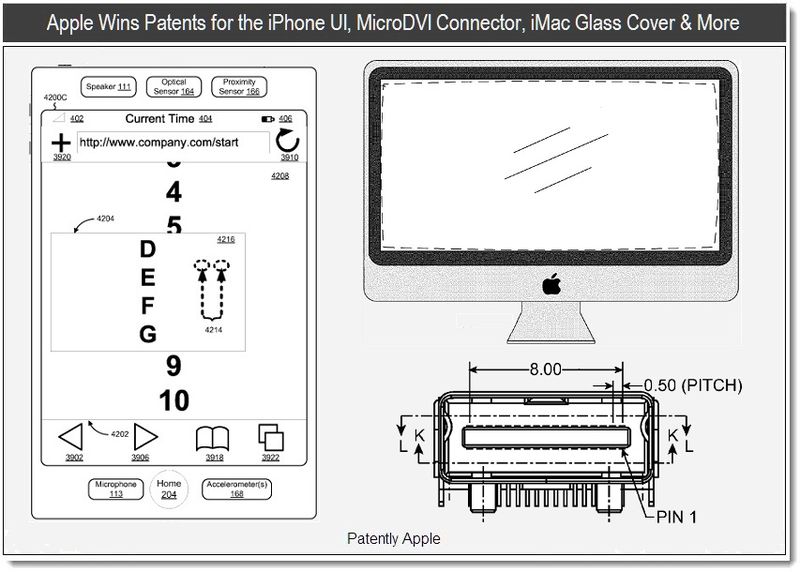 The US Patent and Trademark Office officially published a series of nine newly granted patents for Apple Inc. today. There were four patents that stood out from the pack this morning. The first covered Apple's original Front Row multimedia app which debuted in 2005. The second covered the iMac's unique edge-to-edge glass cover that came to market in 2010. The third covered one of the original iPhone user interface patents that described the use of touch-activated icons and apps as well as its virtual keyboard and more. And finally, an interesting patent about a proprietary MicroDVI connector surfaced this morning that is likely referring to Apple's Mini DisplayPort connector. All in all, today's round of granted patents proved to be a rather interesting mix of technologies.

Apple Receives a Granted Patent for a Proprietary MicroDVI Connector

Apple has been granted a patent for a MicroDVI connector which may or may not be Apple's Mini DisplayPort. Apple's Mini DisplayPort debuted in Q4 2008. Apple's MicroDVI patent was filed one month earlier. The timing and the design described within this patent would suggest that the two are one in the same. Though technically Apple's patent states that "While these connectors are particularly useful as a smaller (Digital Visual Interface) DVI connector, referred to herein as a MicroDVI connector, the concepts described herein may be used with other types of connectors." 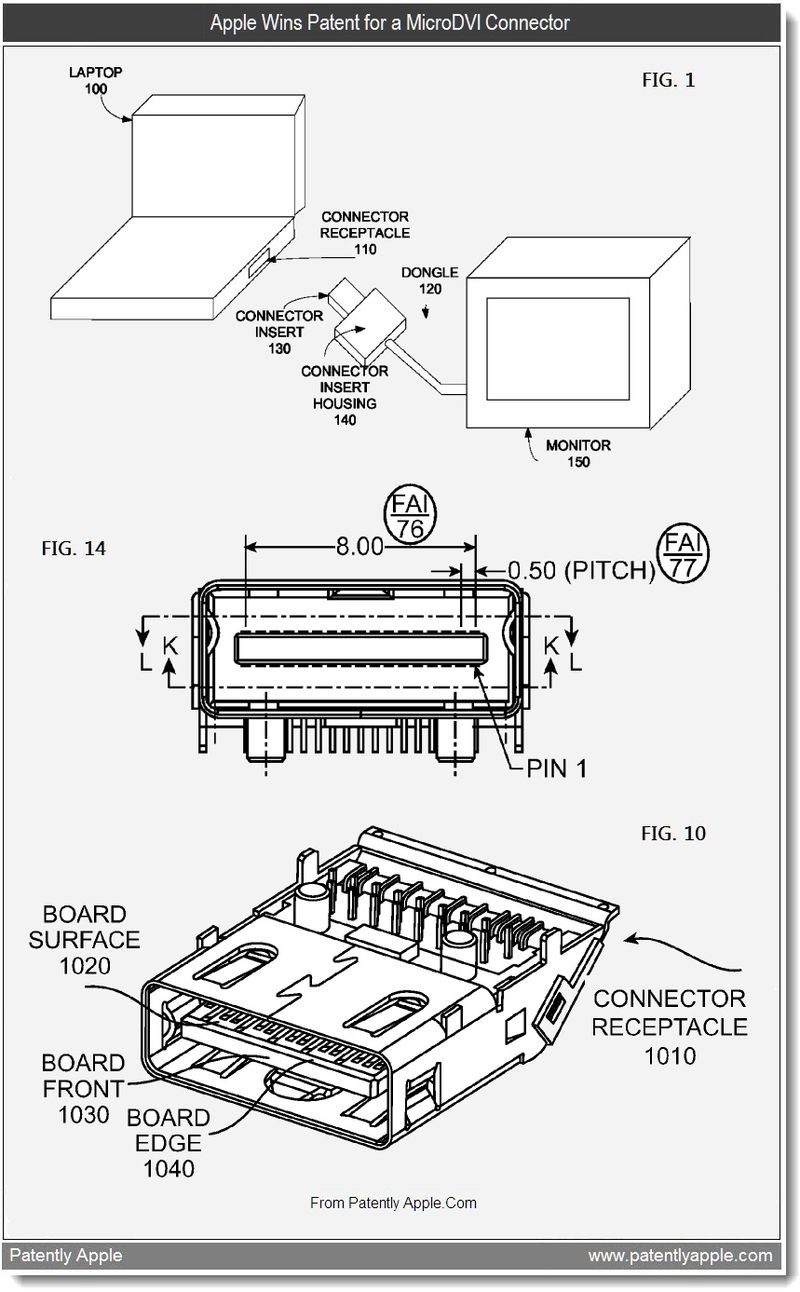 Apple's patent FIG. 1 illustrates an electronic system utilizing a connector including a connector receptacle and connector insert according to an embodiment of the present invention. This figure includes a laptop computer 100 that has a proprietary MicroDVI connector that is capable of driving a second monitor.

According to Apple's patent, the new connector could be used on other hardware beyond laptops, such as mobile media devices, a set-top box (AppleTV) and others.

Apple has been granted a patent for the iMac's eventual advancement to an edge-to-edge Glass Cover solution. This particular iMac form factor debuted in 2005 in plastic and its glass cover didn't go edge-to-edge. Neither did their 2008 aluminum iMac. It was Apple's fall 2010 iMac (see Step 5) that finally delivered the new edge-to-edge glass cover which adds so much to the iMac's classiness. 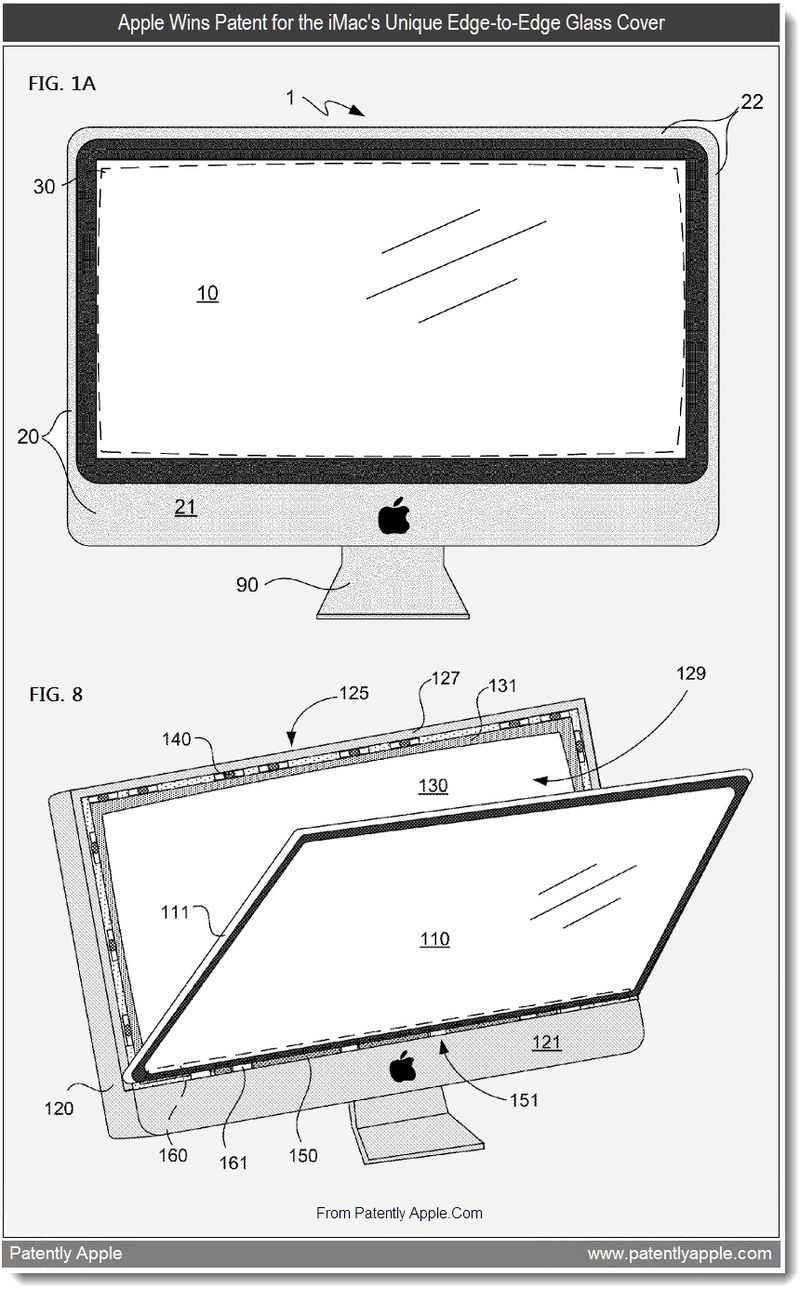 Apple Receives another Granted Patent for the Original iPhone

Prior to the iPhone in 2007, smartphones weren't all that smart. One of the drawbacks to these older smartphones was their overuse of physical buttons and confusing menus. Apple's revolutionary iPhone introduced multi-touch interfaces, virtual keyboards and mini apps and icons that easily directed users to the iPhone's settings and features which included such things as telephony, music, photos and information on whether and stocks. 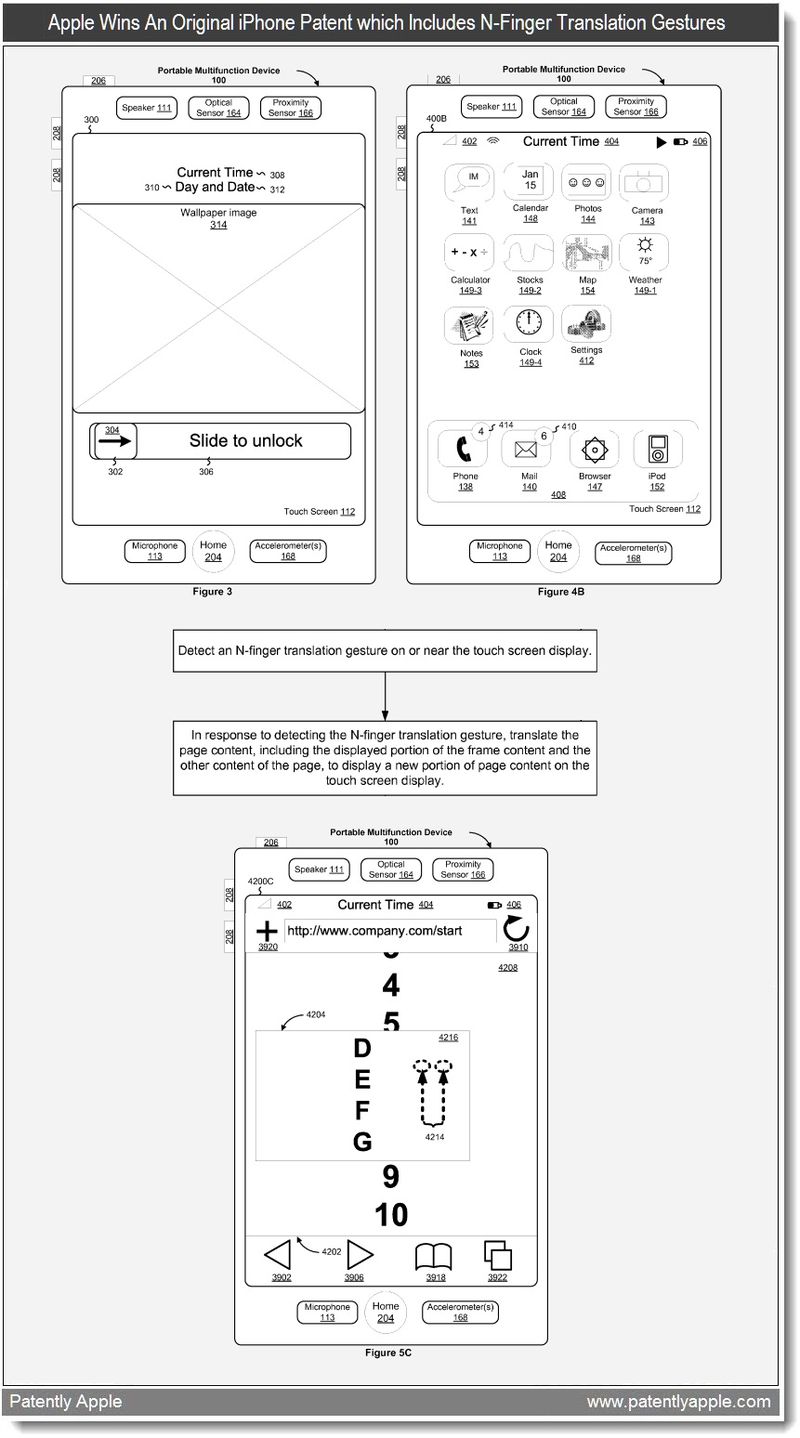 Update June 22, 2011: There have been some comment made in the community that Apple's newly granted patent isn't as extensive as first thought. That's simply inaccurate. If you read the patent carefully, Apple has incorporated a multitude of patents under this newly granted patent. Below is just one such paragraph example wherein Apple is incorportating a whopping 9 patents in their entirety into this one granted patent. Is that enough of an eyeopener for skeptics?

Apple's patent is definitely far reaching but one could only speculate as to just how far reaching it really is. On the other hand, there are those that definitely dissagree, and that's fine. For now, it's nice to know that Apple has just gained a huge patent win that they'll be able to bank on in future legal cases. As someone commented in Nilay Patel's report (noted above), it's Apple's 200 + patent porfolio that matters in the end, not just a single patent. That's a good point.

Before there was the "all-new AppleTV" interface that works with Netflix and Flickr, there was Front Row and Apple Remote for the Mac. Front Row debuted in 2005 and was quite the breakthrough for its time for uniquely displaying multimedia on a computer. 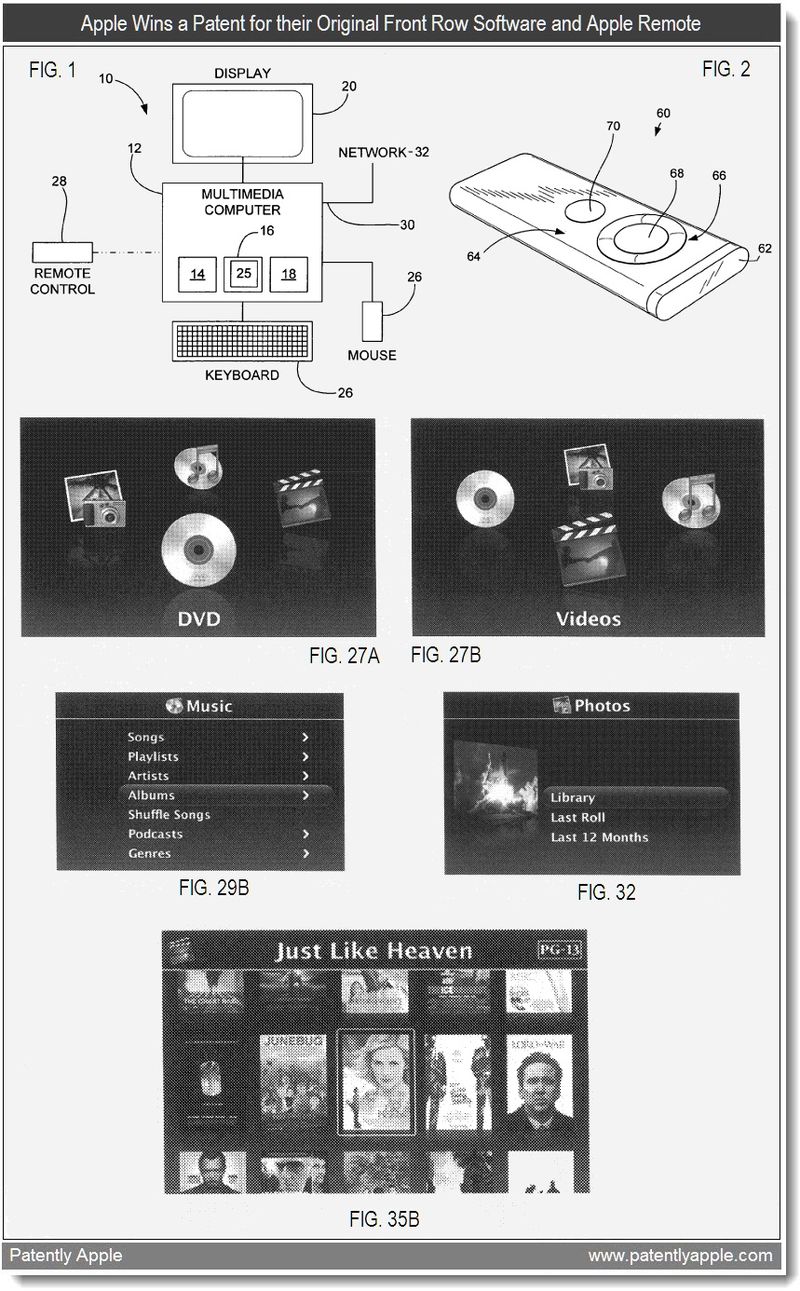 Persistent State Database for Operating System Services: Filed in 2004 - A database is used to store user interface state information. The database is accessed by a key having a service ID field, a caller ID field, and a caller context ID field. The caller context ID is used to identify the context in the application program from which the user interface is called. In this manner, the system can differentiate between calls from different portions of the application program which can have different user expectations of the desirable user interface state.

Management of Podcasts: Filed in June 2006 - Apple's invention relates to podcasts and, more particularly, to acquiring, managing, and organizing podcasts.

Control of Electronic Devices based on Capability Descriptions: Filed in October 2006 - Apple's invention relates to the describing of the capabilities and functions of electronic devices such as mobile telephones and personal assistants (PDAs), and their control by, for example, applications on a user's computer. 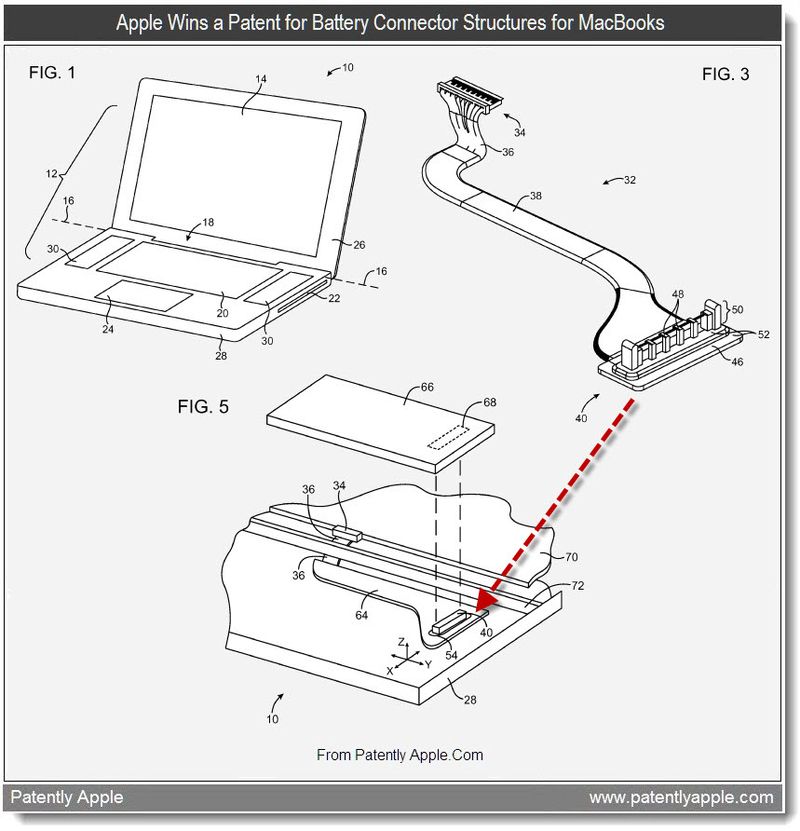 The MicroDVI port was the first, proprietary video connector for MacBook Air. Mini Dvi was an industry standard (Sony used it on it's small lappies), but was too thick to fit in the swing-open port hatch. Micro DVI was later replaced by Apple's open-licensed take one DisplayPort.