The US Patent and Trademark Office officially published a series of 15 newly granted patents for Apple Inc. today. In our third and final granted patent report of the day we cover the technology behind Apple's advanced strobe light system which embeds important information into photos that could later assist users deblur photos when editing. Other patents include the cosmetic switch assemblies for iOS devices like the iPhone and a Japanese acquired patent relating to telephony. Whether the technology is restricted to the Japanese market is unknown at this time. Report Updated

Apple has been granted a patent relating to an iOS camera controller that commands a camera flash to produce two or more multi-value coded pulses of light during a single shutter cycle of the picture. As redefined here, the term "camera flash" is not limited to elements that produce only visible light pulses; the camera flash can also, or alternatively, produce non-visible light pulses that could be reflected from moving objects in the scene and then detected by an imaging sensor (as a picture of the scene with the moving object). 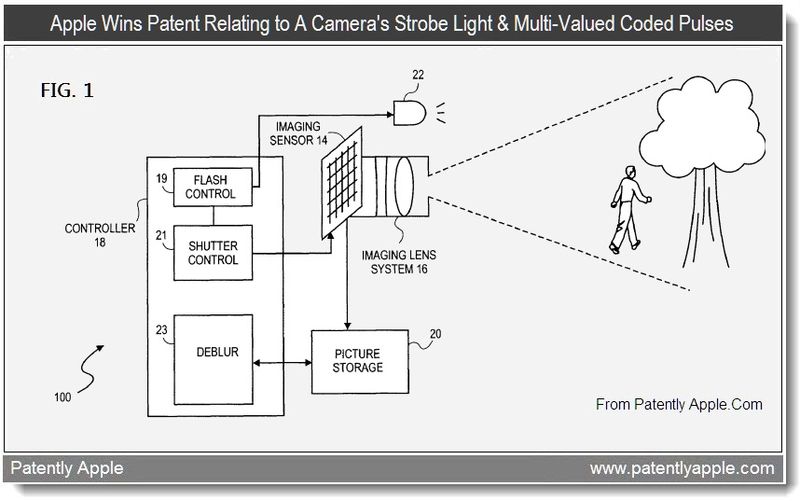 The mechanism is also applicable in the case of video compression, to perform motion compensation across several frames of video.

Apple's patent was evidently fast tracked as we reported on Apple's patent application in detail just two months ago. You could review it again for more details. Apple credits Richard Tsai as the sole inventor of Granted Patent 7,962,031which is "titled "Pulsed Control of Camera Flash."

Update Note - June 15, 2011: It should be noted that Apple's granted patent appears to be describing a next generational form of LED camera flash as opposed to supporting what the iPhone 4 introduced last year. The original patent report, as we noted above, describes this next generation LED flash for iOS cameras. The rumor that Apple may be changing suppliers for the LED camera flash for their next generation iPhone 5, may be due to the technology noted in Apple's granted patent.

Apple has also been granted another granted patent relating to image processing under the titled "Method and apparatus for inverse discrete cosine transform." According to the patent, "Motion video and still image compression algorithms such as those based on JPEG (Joint Photographic Experts Group), DV (Digital Video) and MPEG (Motion Picture Experts Group) perform as part of the coding of images what is commonly known as a FDCT (Forward Discrete Cosine Transform)." Apple's granted patent is about a method of implementing a two-dimensional Inverse Discrete Cosine Transform on a block of input data.

While Apple's next granted patent generally relates to a stiffening plate for an electronic device circuit board, it also relates to a high cosmetic quality and low profile switch assembly for iOS devices. 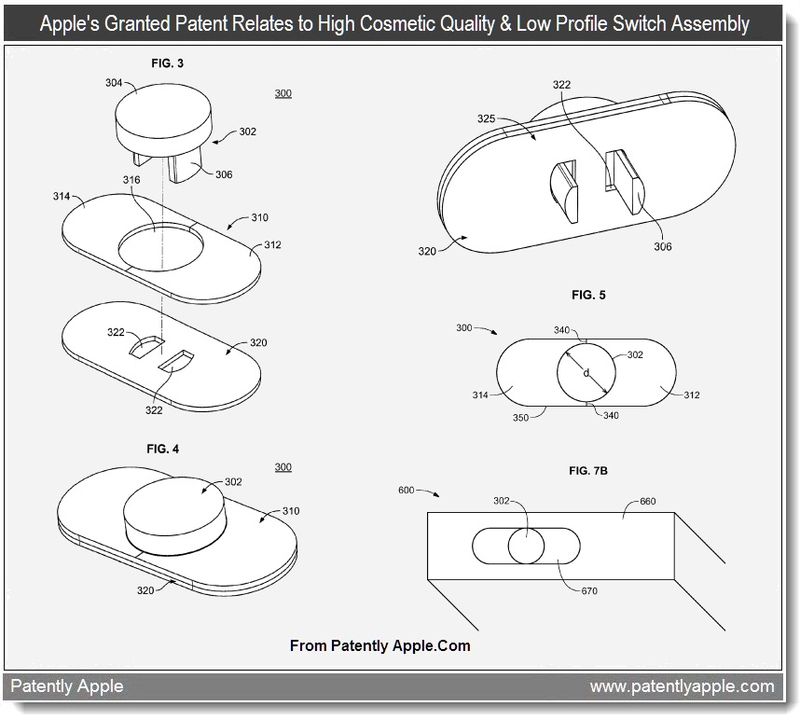 While the patent states that the design is for a "hold button," the design obviously covers other kinds of switches like those associated with Apple's iPhone 4's volume controls.

Apple credits Stephen Lynch and Dinesh Matthew as the inventors of the Granted Patent 7,961,476.

Mobile Telephone Terminal with Improved Utility: A strange Reissue patent was put into Apple's granted patent list which appears to be a Japanese mobile phone patent that Apple has acquired. Curious phone addicts may want to check it out. Whether the technology is limited to the Japanese market isn't known.

Method of displaying an audio and/or video signal in a graphical user interface (GUI) (Dates back to 2002.)

One of the last patents sounds like a call centre / inbound customer service patent.