On June 23, 2011, the US Patent & Trademark Office published a patent application from Apple that reveals various concepts behind a newly advanced directional audio interface. In one scenario, a specialized effect with a new kind of headset on would create an invisible spatial arc over the user's head that could control iPod menus through air gestures. Alternatives work with sensors in the iPod so that a user could map out movements to specific menu actions as our opening graphic illustrates. Apple's patent provides us with a mix of practical and very futuristic concepts on how we'll be able to control our iPod menus in the future through new audio interfaces. Concepts that will drive the competition mad once again.

With their small size and portability, portable media devices could be used during a variety of activities, for example while reading, walking, running, biking and driving. While engaged in these activities, the user could be "visually" focused on the activity and simultaneously "aurally" connected with the portable media device. Interacting with the device without using a visual interface could be accomplished with limited functionality on today's devices, such as by depressing a simple on/off button and operating a volume control on a headset connected by a wire or wirelessly to the device. Menus Presented Based on Spatial Direction or Text-to-Speech

Apple's patent FIGS. 5A and 5B illustrate two sets of menu items of an audio user interface presented at spatially distinct locations with respect to a user's position. 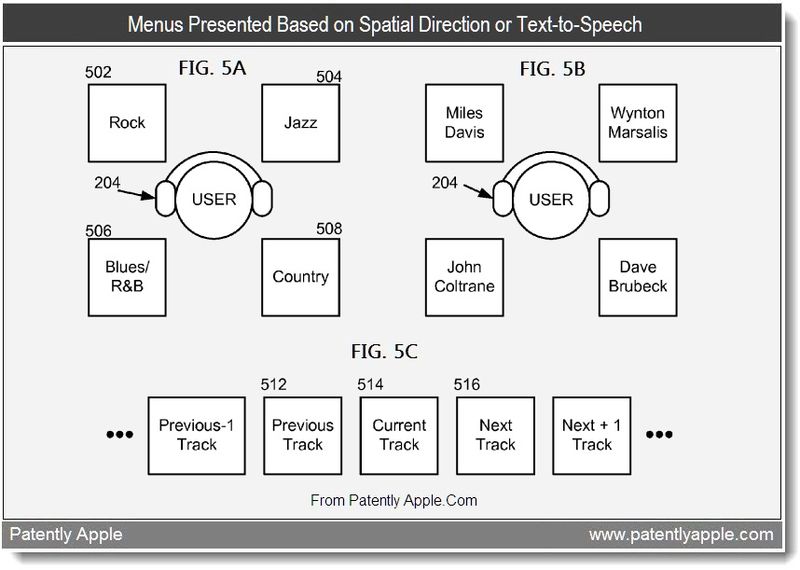 The user could move portable their media device in the direction of a menu item, and the sensor could detect the movement. The processor in the device could determine, based on the sensed movement, the menu item indicated by the user and present a confirmation of the indicated menu item to the user, such as repeating the menu item or sample of recorded music.

The user could then select the indicated menu item by a second movement of their portable media device, for example a quick shake, or by confirming through a user input interface, such as depressing a physical button, on your portable device. In some embodiments, the portable media device could automatically select the indicated menu item based on the initial sensed movement without using a confirmation from a second gesture.

Apple's patent FIG. 6 illustrates different movement gestures that could be associated with selecting a menu item. 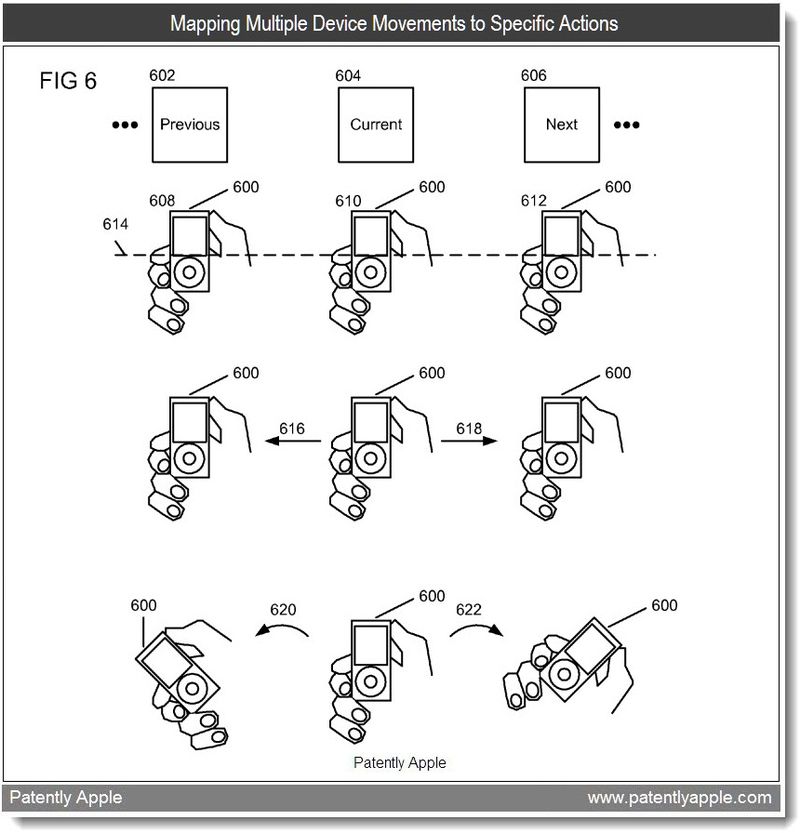 The user could displace the portable media device along a left/right axis (614) to choose a "previous" selection (602) or a "next" selection (606). In this case, a "left" position (608) along the axis (614) can indicate "previous" (601) and a "right" position (612) along the axis could indicate "next." Thus a sensor within the portable media device could sense position, and the processor could change a selection according to sensed position.

Now this is wild. Apple's patent FIG. 8A illustrates an audio user interface presented by a portable media device through a stereo (binaural) headset (804) where the set of menu items are arrayed spatially in an arc about a user (top view). 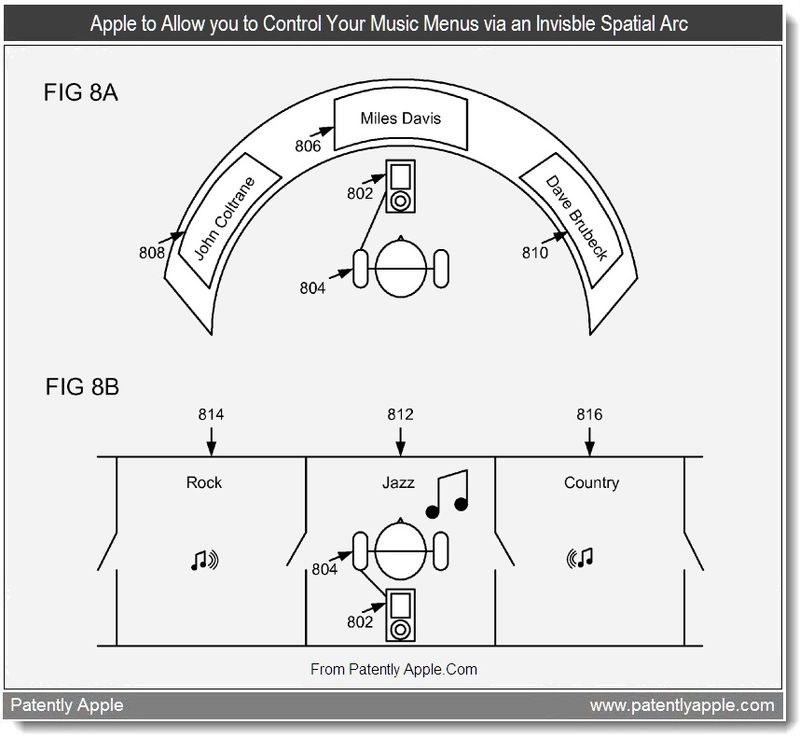 Audio processing algorithms could be applied to the "left" music and "right" music so that they appear more distant (e.g. quieter) and "off center" compared to the "center" music. Changing the position of the device or specific movements of the device could also alter the combined sound from all three locations presented to the user. For example moving the device from left to center to right could cause each of the directionally indicated music to play louder while the others played softer.

Alternatively, one could consider the arrangement shown in FIG. 8A as an aural form of a visual user interface known as "cover flow" used in Apple products such as the iPod. While FIG. 8A illustrates only three menu selections at left, center and right positions, additional menu selections could also exist off stage. In one embodiment the menu selections could continue in the right and left directions continuously, with the user able to shift the center position to a present a new menu selection by a particular movement of the portable media device.

A segment of jazz music could be presented as the current selection with the user seeming to be situated within a "jazz" room 812, while simultaneously the user could hear a segment of rock music emanating from an adjacent room 814 to the left and a segment of country music emanating from an adjacent room 816 to the right. A processor in the portable media device 802 could spatially process the music to diminish the volume and "occlude" the sounds from the adjacent "rooms" to represent distance from the user and intervening room walls. Moving the device to the left or right could cause the sound field to shift appropriately (for example the user could seem to switch position to adjacent rooms).