The US Patent and Trademark Office officially published a series of 17 newly granted patents for Apple Inc. today. There were four outstanding granted patents within this group. The first covered the technology behind Apple's original iChat video conferencing system. The second covered a system for integrating gaming & music interaction into iOS devices. The third covered Apple's delivery of a thinner touch sensor panel design using polyethylene terephthalate plastic instead of traditional glass and finally the fourth notable granted patent of the day covered Apple's camera shutter system. The shutter system was specifically designed for smaller device spaces, and according to Apple, could one day be integrated into a higher-end standalone digital camera. Updated

Updated: Apple has been granted design patents for their new iPod shuffle and what appears to be an icon relating to MobileMe. 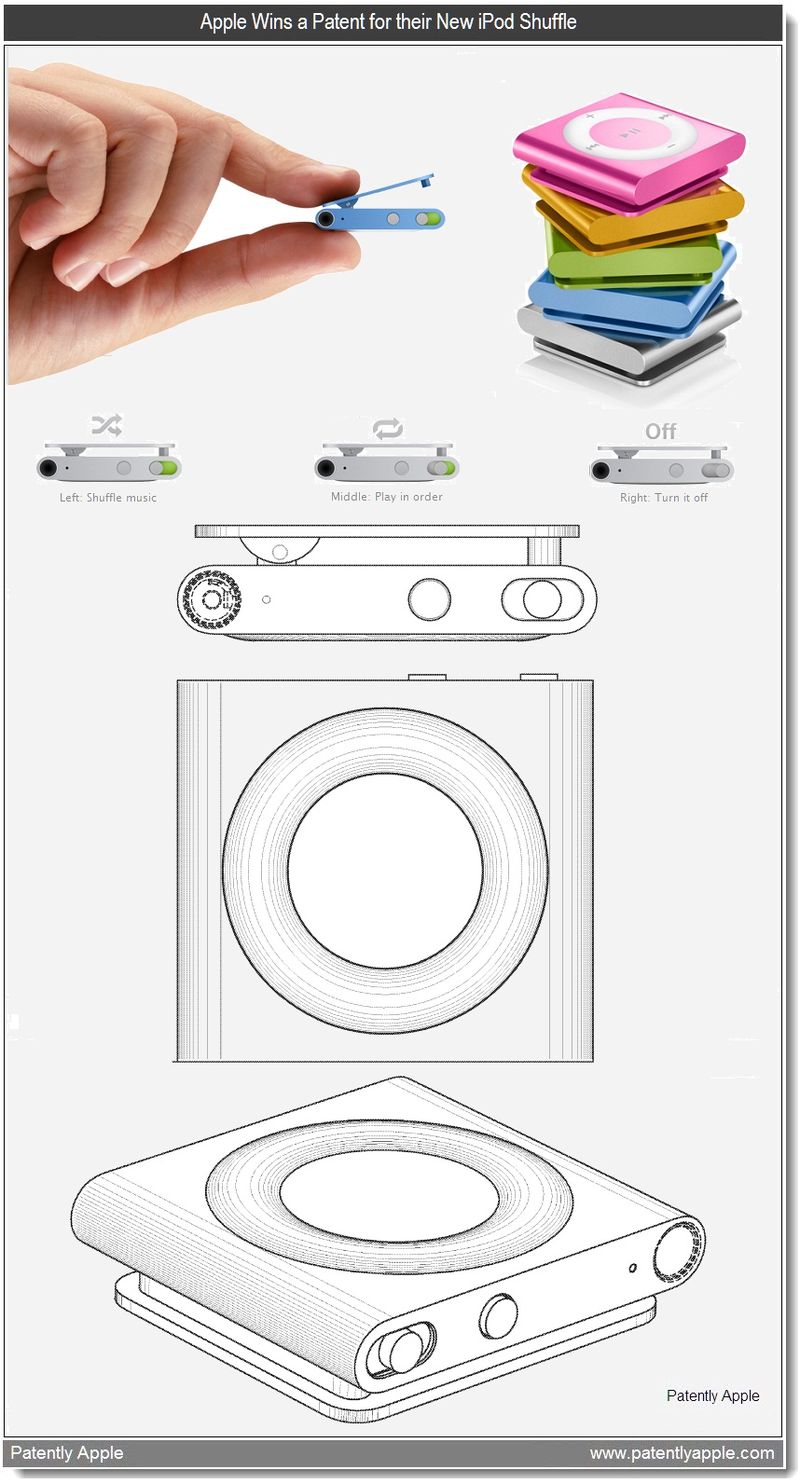 I'm not familiar with MobileMe enough to tell if this icon is old, current or something new on the way. But if Steve Jobs wanted his name associated with it, then it must be noteworthy. 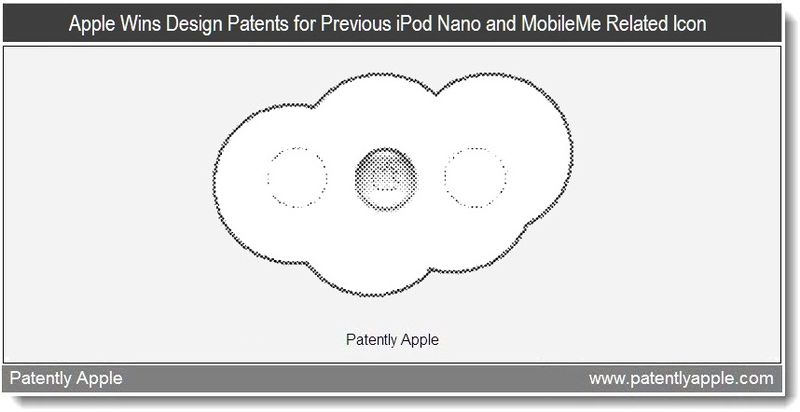 Before Apple's iPhone ever launched in 2007, today's granted patent shows us that they had a plan for integrating games into their future media players. Today's granted patent is one of the reasons why the iPod touch is the most popular portable game player in the world today. 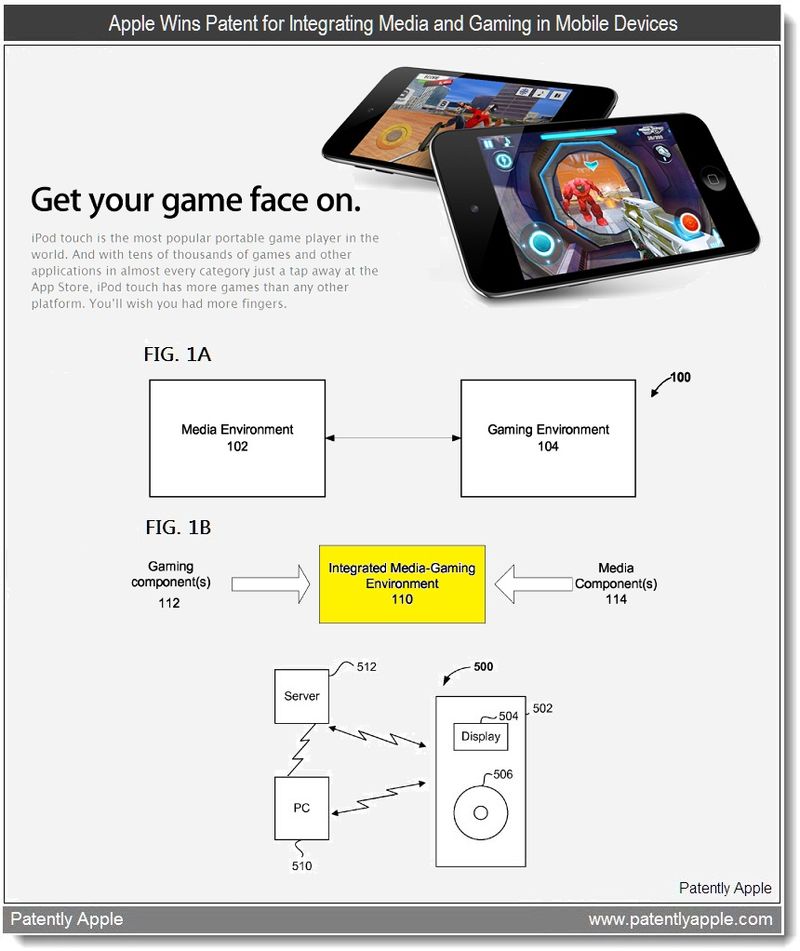 Broadly speaking, Apple's invention pertains to techniques for allowing gaming and media environments to interact with which each other. The techniques are highly suitable for portable computing devices that could execute games and/or present media. These computing systems include portable, wireless, and/or handheld devices (e.g., the Apple iPod media-player) configured to function both as a media-player and a gaming console. In accordance with one aspect of the invention, media and gaming environments could interact and affect each other. By way of example, gaming content and/or the gaming experience provided and/or suggested to an individual could be tailored based on his or her musical profile effectively obtained from the media environment associated with the individual (e.g., based on favorite songs, songs recently played, songs purchased).

Apple has been granted a patent relating to PET based touch sensor panels used on devices such as the iPhone and iPod touch.

Apple states that sensor panels with substrates made of plastics such as polyethylene terephthalate (PET) are not only less expensive than glass counter parts but could also assist them in creating thinner devices. The challenge was that it was more difficult to form thin metal traces on plastic substrates as it could force the sensor panel to be widened. Apple's patent details how they were able to overcome this long standing problem and eventually integrate into their solution into their iPhone and iPod touch. 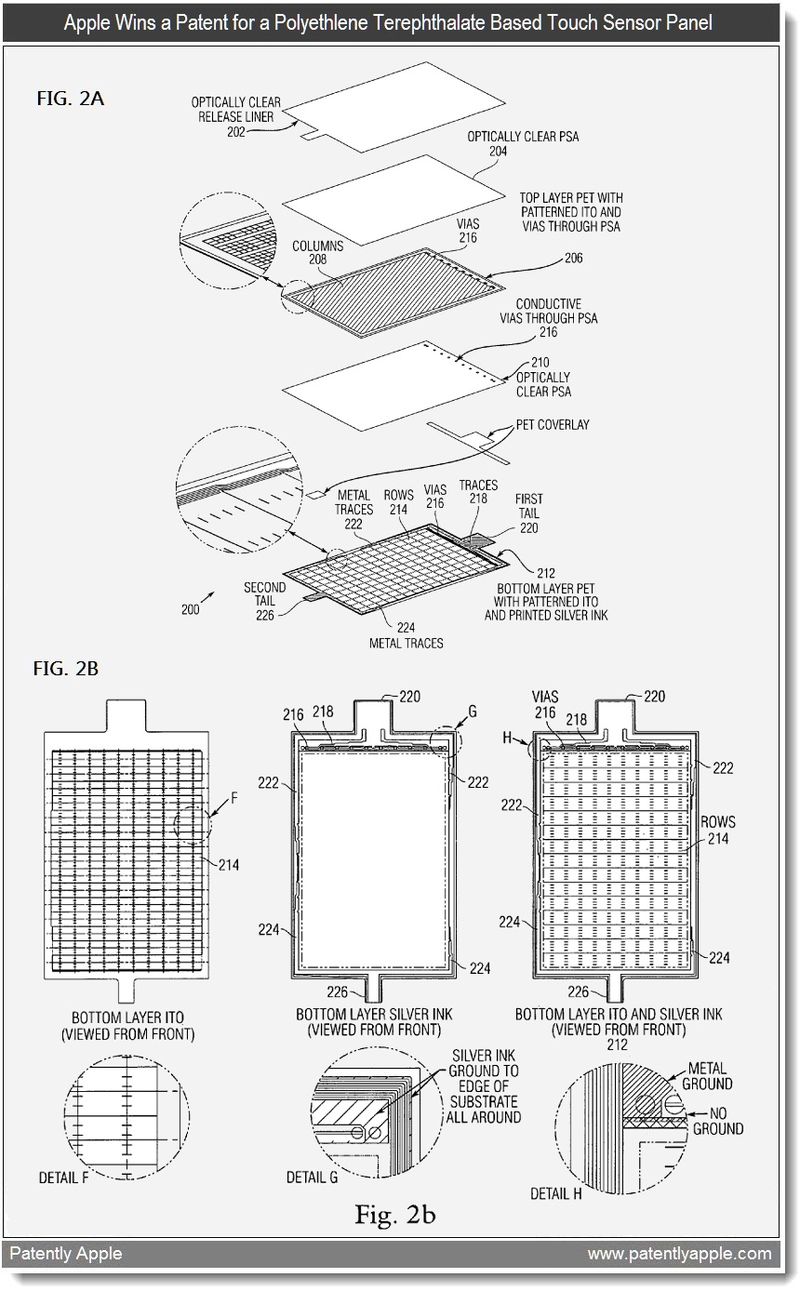 Apple's patent FIG. 2a is an exploded perspective view of the layers of an exemplary mutual capacitance touch sensor panel; Patent FIG. 2b illustrates an outer side view of exemplary bottom PET layer.

Apple has been granted a patent for an Electro-Mechanical Control which could be found in such devices as their current iPhone, iPod touch, MacBook and iMac – but may also one day be associated with a future "dedicated high-end digital camera," according to Apple's patent. 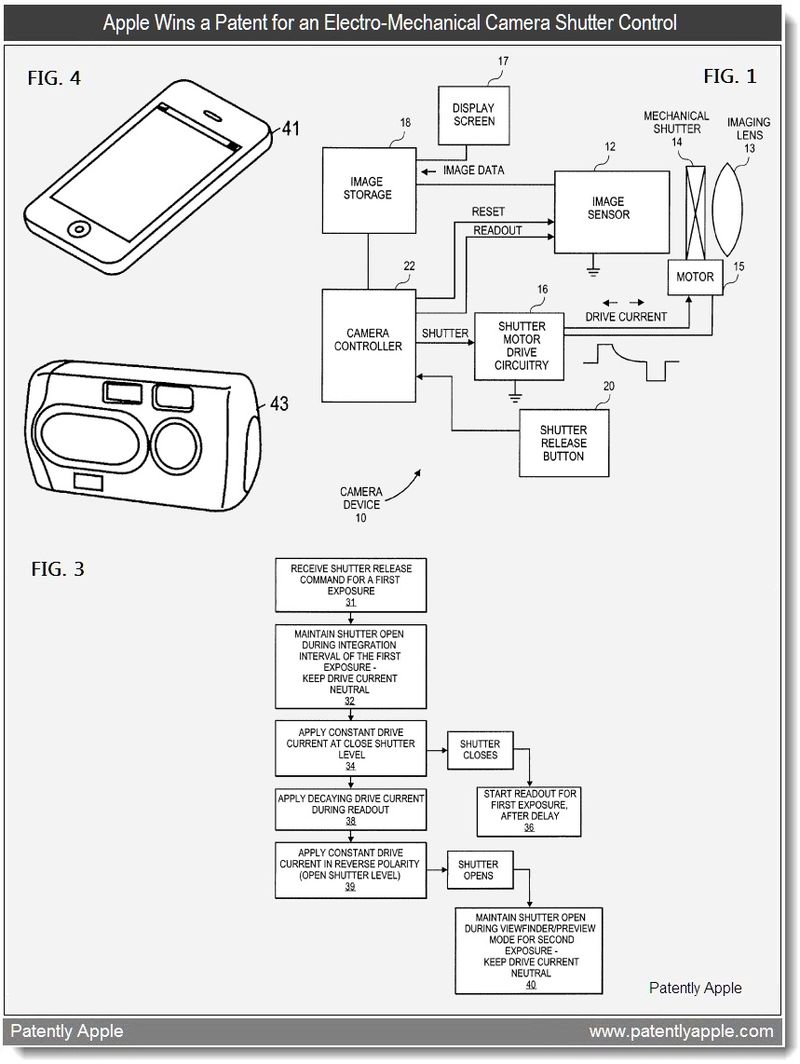 Specifically the invention relates to digital cameras having an electro-mechanical shutter mechanism for accurate control of the exposure time of a microelectronic imaging sensor of the device. Such a design leads to lower power consumption due to the drive current of a bipolar electro-mechanical shutter mechanism being pulsed over as short an interval as possible. However, when shortening the close shutter pulse at the end of a given exposure, the quality of the captured image for that exposure may suffer due to noise (e.g., banding or other visible artifacts). Apple's patent describes their invention that overcame this problem.

P-Chassis Arrangement for Positioning a Display Stack: Apple's invention relates to portable electronic devices and, more particularly, to a chassis which may be used to align a display stack with respect to a bezel.

Synchronization Methods and Systems: Apple's patent relate to systems and methods for synchronizing data between two or more data processing systems such as a desktop computer system and a handheld computer system.

Hi Elias. You're right 100% and we've added an all-new iPod shuffle graphic to the report because of your constructive feedback.