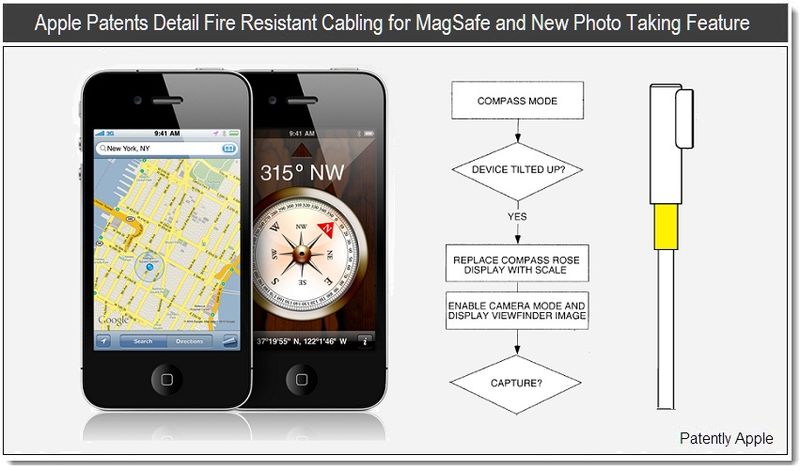 Two of Apple's latest patents that were published this morning by the USPTO detail new fire resistant cabling for MagSafe and a spin-off feature related to the iPhone's "Maps + Compass" feature. This new feature may be engineered right into next generation iOS device cameras allowing users to superimpose compass bearings right onto their photos. Unless you're a spy or surveyor, however, I'm not quite sure why you'd want this feature. If you happen to have an idea or two as to why we'd want this feature, then by all means send in your ideas below in our comment area.

After being sued for a fire related to Apple's MagSafe design in 2010 and having faced a class action suit back in 2009, it appears that Apple has redesigned the MagSafe cabling – amongst other refinements. Although most of you have seen the new design utilizing a metal housing, perhaps you weren't aware that Apple now uses fire-resistant materials on a key part of MagSafe's cabling.

Specifically, cable plug 105 noted in patent FIG. 1 includes a strain relief noted as patent point #115. The strain relief, states Apple, may be formed of a flexible material. For example, it may be made of a halogen-free material. In a specific embodiment of the present invention, it can be formed using a thermoplastic elastomer, fluorinated ethylene propylene, or other appropriate material.

Elsewhere in the patent Apple states that "it is desirable to use halogen-free materials in manufacturing the cabling used in power cable assemblies. Halogen is commonly used since it provides a flexible cable that is fire-resistant. Unfortunately, materials that are used for halogen-free cabling are themselves not fire retardant. Further, the addition of fire-retardant chemicals makes halogen-free cables brittle and is therefore not suitable. Accordingly, various embodiments of the present invention provide a strain relief that provides fire protection and is halogen-free."

In our October 2010 we reported that Apple was considering MagSafe for portable devices like the iPad. In Apple's latest MagSafe related patent this is somewhat repeated as follows: "Power cable assembly 100 may be used for providing power to an electronic device, such as a laptop, netbook, notebook, tablet computer, media player, portable media player, cell phone, or other type of electronic device."

Although it's more likely that apple will implement an all-new Hybrid DisplayPort/USB 3.0 Connector related to Thunderbolt on future iOS devices, we just wanted to point out what this latest patent was still considering. Considering and implementing, of course, are two different things. So time will tell. 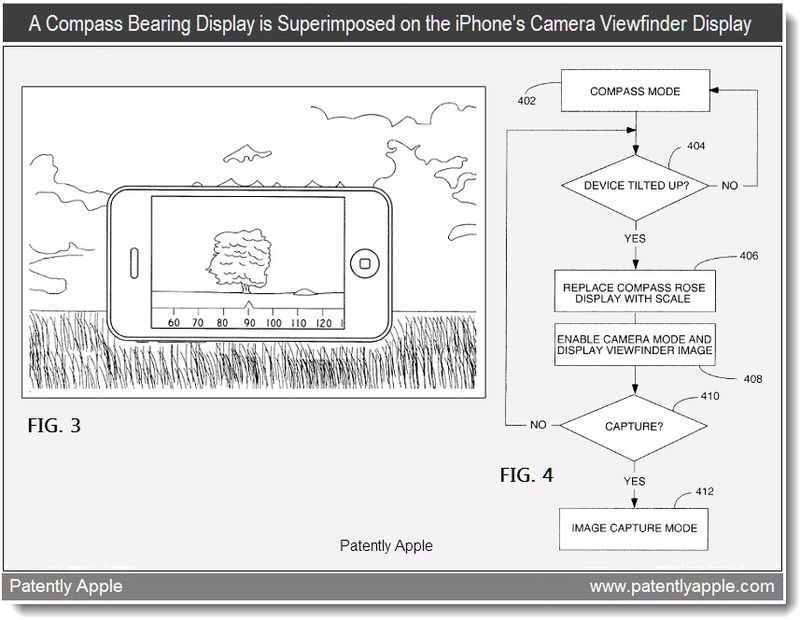 A sighting compass mode of operation in accordance with the present invention combines the functions of a magnetic sensor and image sensor. In this mode of operation, illustrated in FIG. 3, a compass scale is juxtaposed with or superimposed on an image from image sensor. For the most beneficial operation in this mode, the iPhone is held so that the optical axis of image sensor is approximately horizontal and pointing at a distant object, such as a tree as shown in FIG. 3. This allows the iPhone owner to accurately determine the bearing to the distant object.

Apple credits Achim Pantfoerder as the sole inventor of this patent. Mr. Pantfoerder has worked on such Apple patents as the one relating to proximity and ambient light sensors.

About a year ago, Patently Apple posted a report titled "Apple Engineers: Smart Device Covers are a Paradigm Shift!" Today, we see that Apple has tweeked that particular patent under "Continuation Patent" number 20110090626. It isn't a new patent as others are reporting on today.

I can give you a concrete example from this past Saturday. I attended the 175th Celebration of the Battle of San Jacinto reenactment in Houston. The reenactment took place on the other side of the park from where the Texians overran Santa Anna...so spent a god bit of time walking the stone markers listing these positions. I was taking GPS readings and pics looking back toward the San Jacinto monument on the rise. The battle opened up on the other side of the rise. I was trying to picture how fast the Texians would have approached the Mexican army position as they came over the rise. I would have loved to have the ability to easily understand the downward slope, much less with a bearing, see which unit came from which direction.

I can see several uses for this patent on historic battlefields. This could be helpful when we really start to see Augmented Reality. Preservationists might find this helpful in fighting urban encroachment on battlefields.

One additional use. I just finished redoing my yard's water irrigation system. This would have been handy on aligning my drawings of the trenches and sprinklers with my paper/digital notes.

Keep up the good work.

This would mean that you can not only know where you took it, but in which direction. Maybe this will be integrated nicely into iPhoto or Aperture, so you can start to build 3D environments out of your images