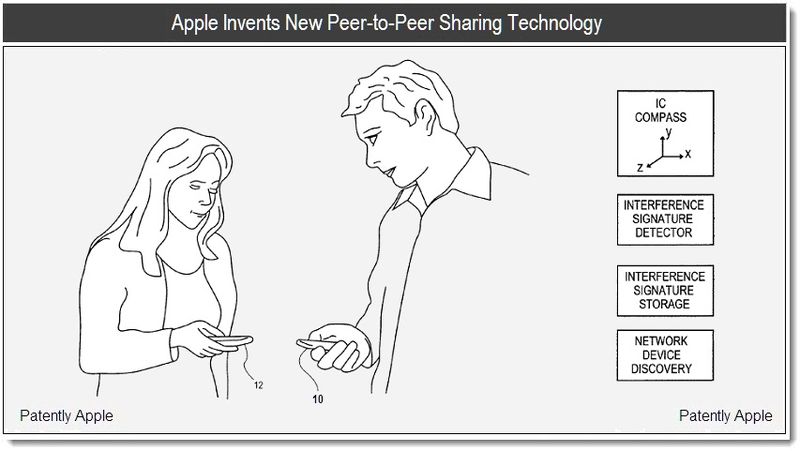 In late 2009 Patently Apple reported that Apple was working on a new short-range wireless technology that would work with a newly proposed iTunes Kiosk. Apple had also shed some light on using NFC technology in another patent that year in respect to a new application they were working on that they dubbed Grab and Go. As time went on, we've documented numerous Apple patents on this subject in our NFC Archives. In a new Apple patent revealed this morning, we find that Apple has been advancing their peer sharing technology in ways that will dramatically quicken the process of data sharing. The newly proposed system utilizes a unique magnetic compass and encoded supersonic tone methodology. Apple notes that their new methodology will also allow you to share information on your iPhone easily with other devices like your iMac, MacBook or stereo system. Apple, as always, is focused on making new technology work easier for the consumer.

Various protocols for device-to-device communications require some type of identification process generically referred to here as network device discovery. This process is performed to set up a connection or a communication channel between the two devices. Certain characteristics of various network device discovery processes are worth noting. For instance, WiFi requires a configuration process that is more complex and lengthy than that required by Bluetooth, although WiFi is more suitable for operating larger scale networks and has a faster connection and greater distance range than Bluetooth. The set up process for Bluetooth is in turn more complicated and lengthy than that needed for NFC. When an NFC interface is available, it could be used to exchange Bluetooth pairing information to pair, for example, a headset and a smartphone, before handing off the data transfer to the Bluetooth protocol. In other words, the process of activating the Bluetooth interface on both sides, including searching, waiting, pairing and authorization between the two devices, may be replaced by a relatively fast setup over NFC followed by an exchange of Bluetooth pairing information over NFC.

Apple's solution to simplifying Network Device Discovery involves a method which monitors a compass output in a portable electronic device. As the portable device and an external device come closer to each other, a magnetic field signature is computed based on the monitored compass output. A determination is then made as to whether the computed signature could be associated with or implies that a previously defined type of electronic device (with which a network device discovery process could be conducted) is in close proximity. In other words, as the two devices come closer to each other, their respective magnetic characteristics cause the compass output to change in a way that implies that a network device discovery process should be initiated between the two devices.

Using the compass output in this manner to in effect prescreen another device, for purposes of establishing a communications connection whose setup is particularly involved or lengthy, may help make more efficient use of time and portable device resources. For instance, there is less power consumption and less network bandwidth consumption by the portable device, because the relatively complex WiFi or Bluetooth setup process may be kept suspended until needed. In addition, the relatively fast trigger provided by monitoring compass output (and comparing to previously stored patterns) could give an early start to a relatively lengthy set up protocol (such as that of Bluetooth) which includes both device search and service discovery processes. This helps avoid having to wait for a timer to expire before starting to poll or search for an external device. 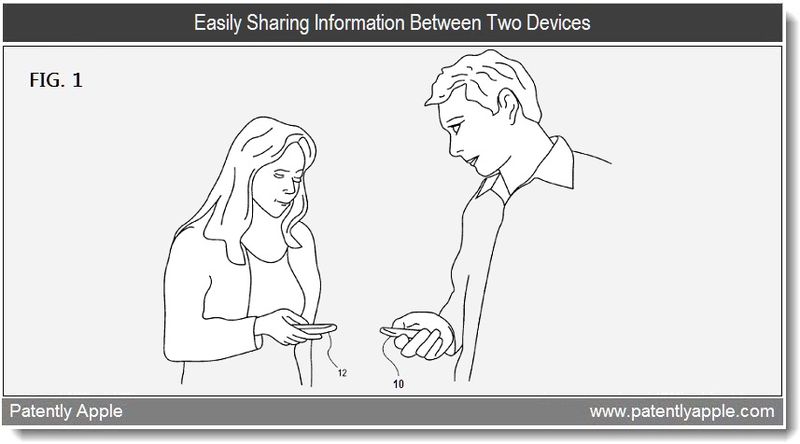 The users of these devices are about to establish a connection between their respective electronic devices as shown above as devices #10 and # 12. Although patent FIG. 1 shows a pair of portable devices, such as smartphones, the method is also applicable to situations where a first portable device is approaching a second electronic device that may be a non-portable or fixed device such as a desktop personal computer, a router, or a wireless access point.

The method of the invention takes advantage of the fact that the first portable device #10 contains an integrated circuit (IC) compass that provides its user with a geomagnetic field direction, be it for instance a heading or an arrow pointing to the Earth's North Pole. The compass output is a calculated or measured, geomagnetic field vector (Earth's magnetic field), that has been corrected or calibrated for the disturbance or interference that results from local magnetic fields generated within and around the first device e.g. by magnetic components such as a speaker and an inductor.

Empirical analysis, that is, relying on or derived from observation or experiment, reveals that when the first portable device comes into close proximity with a second electronic device, the compass output in the first device changes in such a way that could be measured. A magnetic field signature may thus be determined for that situation, based on the compass output changing (due to proximity of the two devices 10, 12).

For example, a Bluetooth protocol may be initiated by the first device which starts to gather information about other Bluetooth devices that are sufficiently nearby. The resulting Bluetooth or personal area network configuration that is created may be a peer-to-peer network involving the first and second devices or it may be a point-to-multipoint configuration involving the device #10 and two or more other external devices, e.g. a router or an access point (not shown).

The device discovery phases may include identification of a physical interface address, handshake or negotiation of transfer speed, authentication, and identification of different types of services supported. Following completion of the device discovery process, the device is now networked, and could perform data exchange with one or more external devices that have been networked or paired with it. The term "networked" is used here generically to refer to a range of different types of connected communication channels or links over which the devices #10 and #12 could transfer data between each other, including point-to-point pairings as well as point-to-multi-point links and centralized networks.

Components of a Portable Device Relevant to a Network Discovery Process

Apple's patent FIG. 2 is an interesting illustration in that it's evident that Apple has at some point in time acquired this patent that may have been earmarked for a Windows device. Note the Windows style logo as shown in the top left bar of the device.

With that said, Apple's patent FIG. 2 shown below shows us a block diagram of some functional components of the first portable device #10 relevant to triggering a network device discovery process. In this example, the second device #12 is a smartphone whose display (see patent point 13) is showing an antenna icon, which signifies that data transfer is occurring with another networked or paired device. 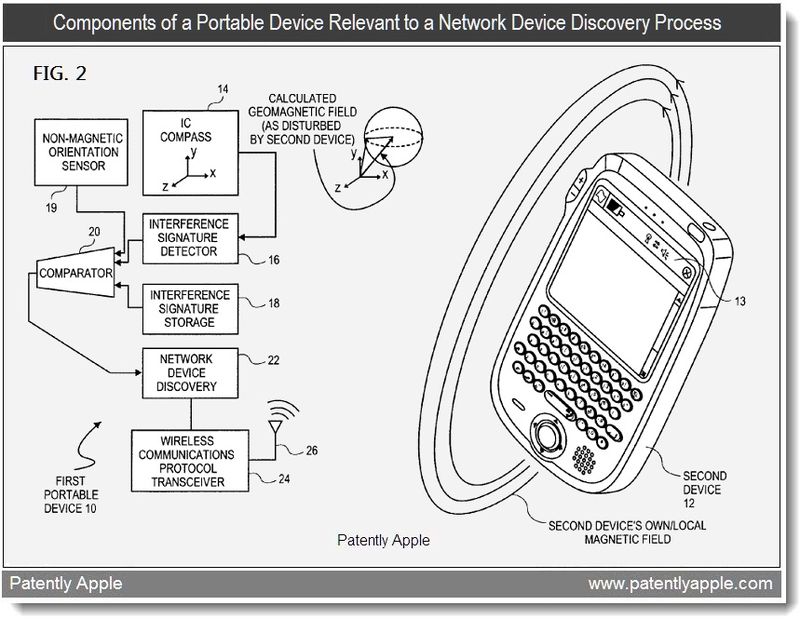 Integrated in the housing of the first portable device #10 we see an IC compass (see Patent Point 14) whose output is a calculated geomagnetic field that is provided to an interference signature detector (see Patent Point 16). As suggested above, the IC compass may be any conventional 3-axis magnetometer-based compass IC, such as those typically used in smart phones and portable navigation devices.

As depicted in patent FIG. 2, the calculated geomagnetic field (also referred to as the calibrated Earth field) has been disturbed by proximity with the local magnetic field of the second device #12. The disturbance is indicated by a vector that points to the center of a geomagnetic measurement sphere, which is now offset from the center of the coordinate system of the IC compass.

In accordance with an embodiment of the invention, the compass output is monitored for disturbances or changes in the geomagnetic field, as the first device #10 and the second device #12 come closer to each other. This monitoring is performed by the interference signature detector. The latter may be a programmed processor with firmware or software that simply tracks or stores samples of the compass output, e.g. periodically, for example, every second. One or more of these samples are then made available to a comparator (see Patent Point 20) as the detected magnetic field signature.

It should be noted that in the examples given here, the detected changes in the geomagnetic field or the compass output are sudden in that they are captured by the signature detector (see patent point 18) before the calibration process of the compass has corrected them.

Apple's patent FIG. 3 shown below illustrates an example data structure in the interference signature storage of the portable device.

Examples include desktop personal computers and smart phones. Also typical of conventional electronic devices is a digital audio player that is able to read digital audio files (e.g., music files; movie files) and decode or play them back through the power amplifier and speaker.

Apple credits Patrick Piemonte, Ronald Huang and Patel Parin as the inventors of this patent.

Is this basically using the magnetic readings as a layer on top of Bonjour that can use WiDi between devices (but from the sounds of it also make (maybe even low power) Bluetooth connections?)