On April 14, 2011, the US Patent & Trademark Office published two patent applications from Apple that reveal the next chapters for both a new geo-location service system that uses WIMAX transmitters and a new EMI shielding process that is needed to support Apple's desire to create ever thinner mobile devices.

The Old Way of Integrating an EMI Shield

The frame and cover approach, however, may require two distinct components, constructed from sheets of conductive material (e.g., from sheet metal) added to the circuit board supporting the electronic device components. This could in turn require additional space within the device for the EMI shield, which may place a limit on the device size. 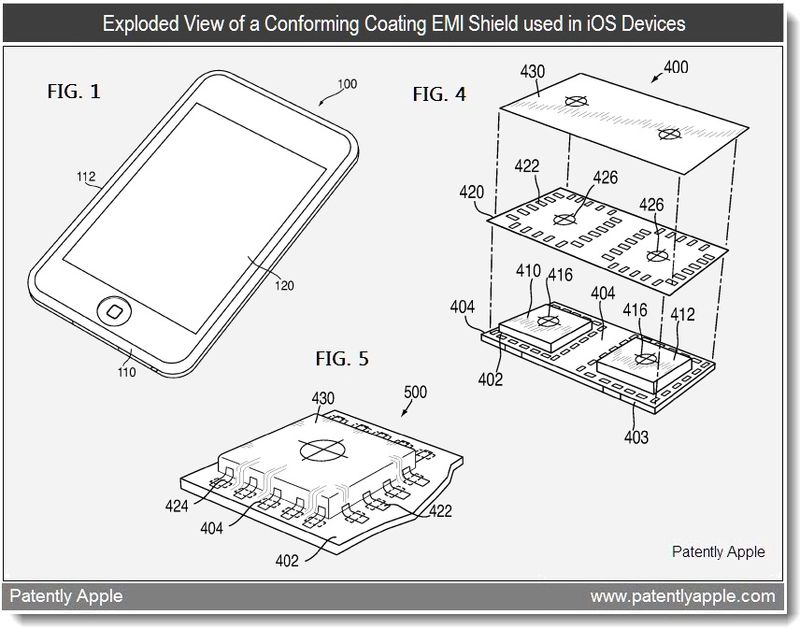 An iOS device could include at least one circuit board on which one or more components could be mounted. The board could be treated with a conformal coating, which provides a substantially continuous layer of material around the board and the components. The conformal coating could be constructed using any suitable non-conductive material such that contaminate is substantially prevented from leaking through the coating and shorting the electronic device components.

The inventors of Apple's patent application: Scott Myers and Douglas Weber. Here's a temporary link to the report (that's only good for 48 hours).

Apple's patent FIG. 1 shows an example system including a computing device for providing location-based services to mobile devices in communication with the computing device; FIG. 4 shows a flow chart of an example process for generating a set of neighbors for a radio transmitter.

The sole inventor of Apple's patent application is Markus Fischer. For communication nerds who want to know more about this patent, check out patent application 20110084881. Here's a temporary link that's good for about 48 hours.

Conformal coatings materials are applied to electronic circuitry to act as protection against moisture, dust, chemicals, and temperature extremes that if un-coated (non-protected) could result in a complete failure of the electronic system.