Have you ever been in a meeting where someone forgot to set their phone to vibrate for incoming calls? Sometimes to be polite, you may smile at the person because the ringtone is the Flintstones theme or some other silly tune and then there are other times when your nostrils will flare if you're in the middle of a pivotal point in your presentation when the stupid phone will ring. Yes, those are the dumb-phones and Apple wants to change all of that and put smart haptics into their future iPhones to really make them, well, smart. Apple's plans are quite extensive to ensure that no matter what environment you're in, your future iPhone will be able to adapt and/or adjust the alert to whatever is needed and appropriate – autonomously. Yes, like in meetings.

Overview of the Standing Problem

Thus, methods and systems that adaptively adjust the alert devices within electronic devices to overcome one or more of these problems are desirable.

Apple's patent generally relates to haptic devices in electronic systems, and more particularly to a self adapting haptic device.

Apple's patent FIG. 1 shown below illustrates an iPhone (e-device 100) capable of autonomously adjusting one or more of its alert devices to obtain the attention of a user in different environments. The iPhone may include one or more alert devices capable of obtaining the attention of the user, including a vibration motor 102, a light source 104, and/or a speaker 106.

Apple's patent FIG. 1 also shows that these alert devices may be coupled to one or more sensors 108 and 110 located within the iPhone that measure indications about the environment in which the iPhone is operating. These measurements may include the movement, proximity to the user, location, whether the user is holding the iPhone, ambient light levels, and/or ambient noise levels experienced by the iPhone. 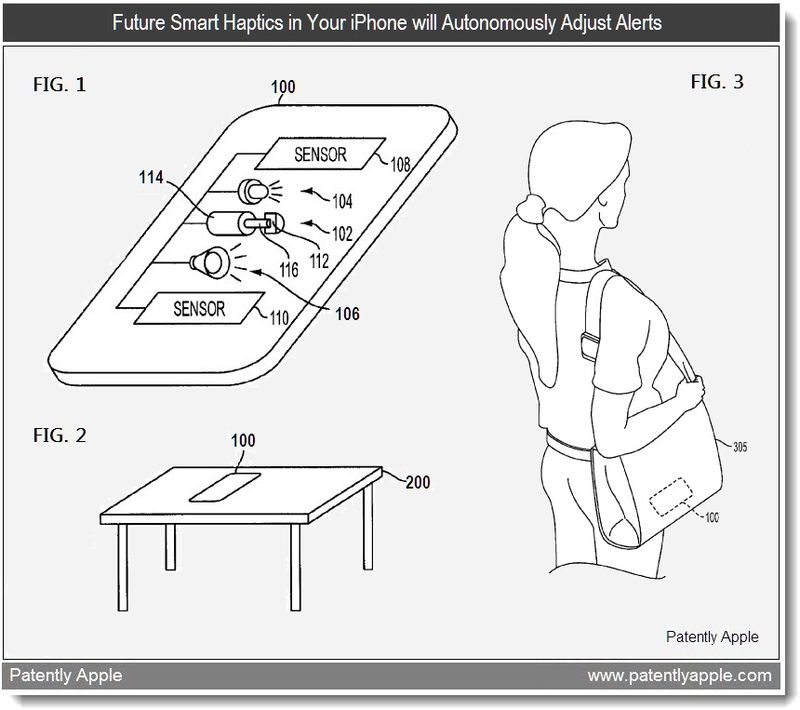 Two Scenarios: Getting the User's Attention

Classroom or Meeting: Referring first to the operating environment shown in FIG. 2, the iPhone may be lying flat on a table such as may be the case when the user is in a classroom or meeting. If the sensors 108 and 110 are implemented as an accelerometer and microphone respectively, then the iPhone may detect that it is in a classroom or meeting by the sensors reporting no movement from the accelerometer and/or a relatively low ambient noise level from the microphone. Upon detecting that it is operating in this environment, the iPhone may silence any audible alerts to the user, such as when there is an incoming phone call.

In a Purse: Conversely, FIG. 3 illustrates a user carrying their iPhone in a purse where it may be jostled around. If the sensors 108 and 110 are implemented as an accelerometer and an ambient light sensor (ALS) respectively, then the iPhone's operating environment may detect that it is in a confined space that is dark by the ALS reporting a relatively low ambient light level and that the iPhone is being moved around by the accelerometer reporting movement. This operating environment may require louder user alerts than the situation shown in FIG. 2, for example, the strength of user alerts, both auditory and vibrations, may be increased in these situations.

For example, if the iPhone is located within the purse, as was noted in patent FIG. 3, the sensors 409 and 410 could indicate that one end 412 of the iPhone is touching the bottom of the purse 305 and the other end 414 isn't. The iPhone's sensors will figure out that it needs to vibrate the end that touching the purse so that the owner will feel the most vibration possible. 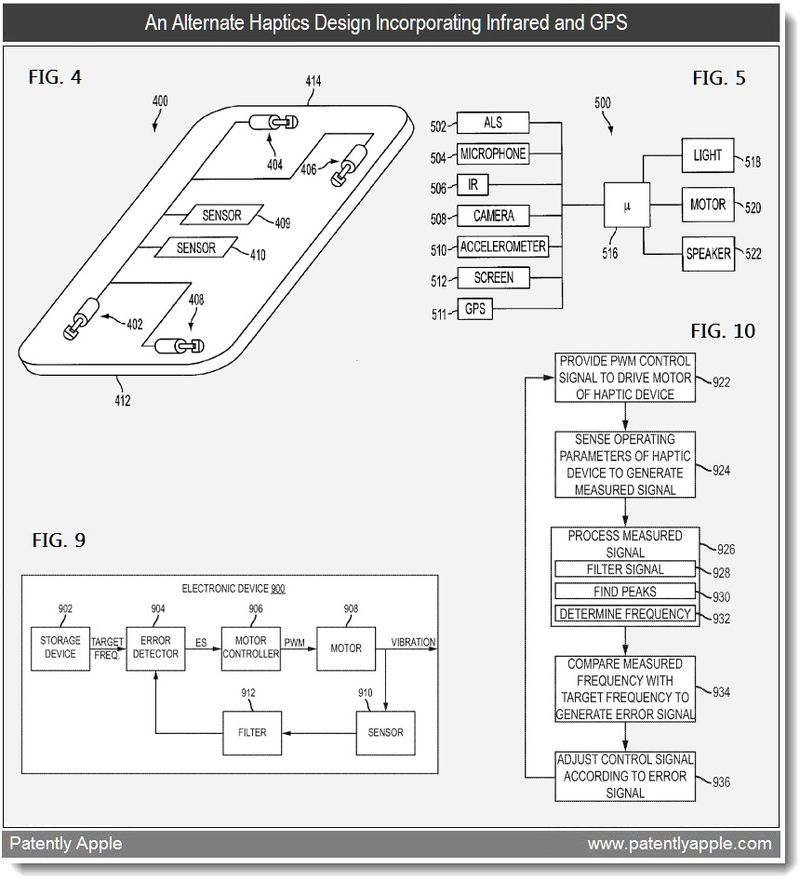 Apple's patent FIG. 5 illustrates a block diagram of an iPhone that may include a plurality of sensors 502-512 coupled to a processor 516. These sensors may be used alone or in combination to determine the current operating environment of the iPhone. The microprocessor may be further coupled to one or more alert devices 518-522.

The iPhone via these new sensor systems will be able to interpret various environments and provide the user with the best way to get their attention that a call is coming in – be it flashing lights, raising the ringtone, vibrating harder or whatever other device capabilities that Apple decides to provide. Not all will of course be laid out neatly in this patent to keep competitors scratching their heads. The patent continues to cover various other aspects of the design such as implementing infrared technology that could measure body heat when you're exercising or GPS to measure your surrounding weather conditions.

Apple's patent FIG. 9 illustrates an electronic device with a feedback and control system for adjusting operating parameters of a haptic device.