In case you live in a cave, Apple has just released the new iPad 2. And in Apple's traditional style, they brought the house down with another winning round of upgrades. The iPad 2 now sports a sleeker design with a new powerhouse processor to give it muscle, dual cameras for creating home movies and enjoying FaceTime while delivering a number of iLife apps to kick things up a notch. And being that we're Patently Apple, it would only be right that we point out the patents that came to life with the iPad 2. All in all, it was great to see Steve Jobs delivering his new bag of toys for us to play with – and play with them we shall. I think they've got another winner here folks and I think that you'll agree.

I've never seen a patent leap to life this quickly but who's complaining? Part one of this patent came to life this morning as Apple revealed Photo Booth is coming to the iPad 2 and it's pretty clear that it'll work its way into the iPhone and other iOS devices over time; hopefully this year. The good news is that this is only the beginning for Photo Booth on iOS devices. Our patent report that was just published last Wednesday lays out many of the new features that Apple is working on to advance Photo Booth even further. Some of them include all new ways of taking advantage of motion, location and it even crosses over to adopting audio effects. The patent even points to how photos will have an option to be presented using a "Spiral" effect and a new interesting "Shake" feature that will allow you to change your photos on Photo Booth from say X-Ray to Squeeze with just a shake of the iPhone or iPad.

While it's not a deal breaker, it could be a lot of fun for the younger crowd who love all things goofy. The bottom line is that Apple has only touched the surface as to where Photo Booth is going and the best is yet to come.

On September 25, 2010 an Apple design Patent surfaced in China that showed us that the iPad would be gaining a Face Side FaceTime Camera. A lot of skeptics were adamant that the camera shown in the patent was nothing more than an ambient sensor. We banged the table in defiance and our report proves that out. At the end of the day, it was in fact a FaceTime camera as was presented today at Apple's special "iPad 2" event. The iPad 2: An Excellent Upgrade

At the end of the day, Apple has once again captured the spirit of invention by advancing the iPad 2 in multiple ways. Apple introduced us to the iPad Smart Cover which is rather a stunningly simple concept and yet so ingenious. It's that "something" you could only expect from Apple's design team lead by Jonathan Ive. 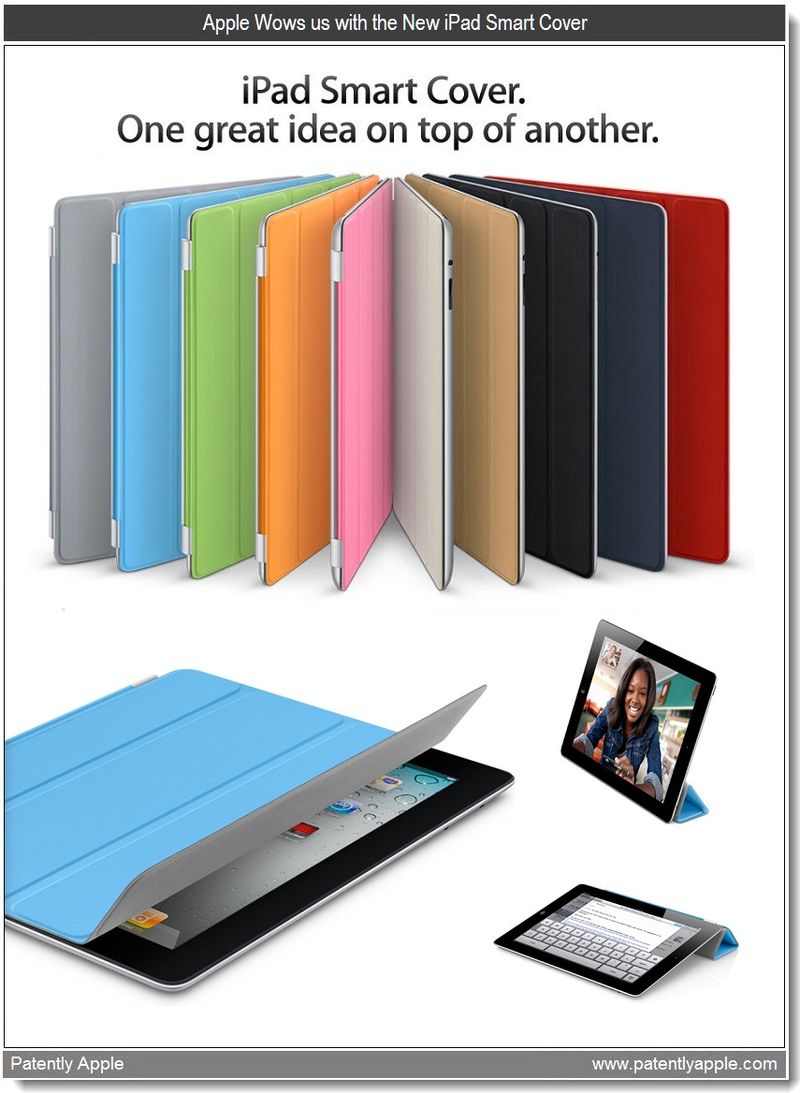 Next up, Apple dramatically reduced the size of the iPad by a whopping 33% while retaining its classy aluminum finish. And if that wasn't enough, they introduced their new Duo-Core A5 processor that packs 9X the graphics power for better gaming, faster multitasking and 1080p video quality. Of course Apple thinks of the entire product and ensures that there's new software like FaceTime, GarageBand, Photo Booth and iMovie editing to show off the power of the A5 processor. And boy does it shine! Imagine what it's going to be like playing Id's Rage on the iPad 2 sometime this fall – Rock'n Roll!

Although we've yet to see all of the patents associated with the iPad 2's many advances presented today, you could be rest assured that we will in the coming months ahead. Apple's new Digital AV Adapter and new iPad 2 Dock will of course be protected by patents as will a host of others. That's a guarantee.

Of course there's only so much innovation that could be presented at any one event for a single product release, but there's more than enough to keep the competition working triple overtime to copy this round of innovations. Of course once they've nearly finished that round, if they're lucky, Apple will bombard them with yet another round of great innovations. Perhaps we'll see their smart bezel and iWallet features surface and drive the wannabes absolutely batty! I mean - Why not right? I know that there's competition gunning for Apple and that they'll definitely challenge Apple over time. But for now, that's all theoretical. For now, Apple's the ten ton gorilla in the room – Bitch! Okay, that last line was for my friend Mark Zuckerberg.

Of course there's room for some tweaks this fall like the leap to 4G from Verizon (and others) and hopefully a wireless charging system like HP's coming Touchstone. Those are two of the features that are on my short wish list. My old-world clunker of a phone and contract ends this fall and finally I'll be able to join in all the fun that you guys are having! A rumor tells me that's there's an iPad with my name on it in Santa's factory at this very moment. Good news travels fast these days.

All in all it was a great upgrade day for the iPad 2. If you have a moment, send in your comments below and tell us what you liked and what you think Apple missed today. We'd love to hear from you. Cheers!

Here's one for the masses... Whats say Apple's system on a chip is the arm core single/dual embeded in an fpga where by when new features are added or upgraded, the iOS package 'injects' the logic and then loads the os.
For example with 4.3 the feature being wifi hotspot... It's a controller feature that was added or modified to the fpga which in turn creates/enables the service. I wonder if anyones electronically diagnosed the chip?

You know what's weird... Magnets normally would distort compasses... So anyone know or understand why the maglock case would not distort, or does not distort the iPad compass? or is it due to the compass IC not being a magnet itself or perhaps too small to be impacted by the cover maglock field?

Bloody great stuff. I'm with Don on wanting 4G. It's just too big a leap to miss out on. I can't be buying an ipad each year, so i'll wait for 4G. But that's about it. The iPad is very nice and the upgrades did it, except for 4G and we know it's coming.

It'll be interesting to see if tablets like the iPad 2 can replace the desktops of businesses. Obviously, not the ones that require Microsoft Office or CAD software, but many of the salespeople's Windows PCs and laptops. Interesting times ahead for Microsoft, indeed.

I'd love for Apple to come up with their own gamepad accessory. This way I could put my future games onto my large HDTV and play with better controls. I want more PSP or Xbox like controls done in a slicker design. You could do it mr. ive. C'mon now.

I'm with Ron on the faster 4G. I don't get the big deal over the iPad upgrade. It's rather boring really. Everyone will do the dual cameras. This category is still in search for a killer app. Apple is the best but not good enough to fork over 800 or 900 bucks for. Not yet at least.

Other than the faster wireless 4G bump and more memory at a lower price, it's a great upgrade. I'll still hold off for 4G.

Nice to see them adding leather for the iPad cover. I'm still hoping for a next generation iPen. I still love doodling and playing with ideas quickly and a keyboard and my finger don't cut it.

I love the idea of that magnetic system for the new iPad covers. Imagine if they could come up with a magnetic hinged keyboard! Man would that be cool!

My wish list is a lower price on the 3G model and another choice other than white. I think white is so old. Why not something like a cool metal burgandy or copper finish.