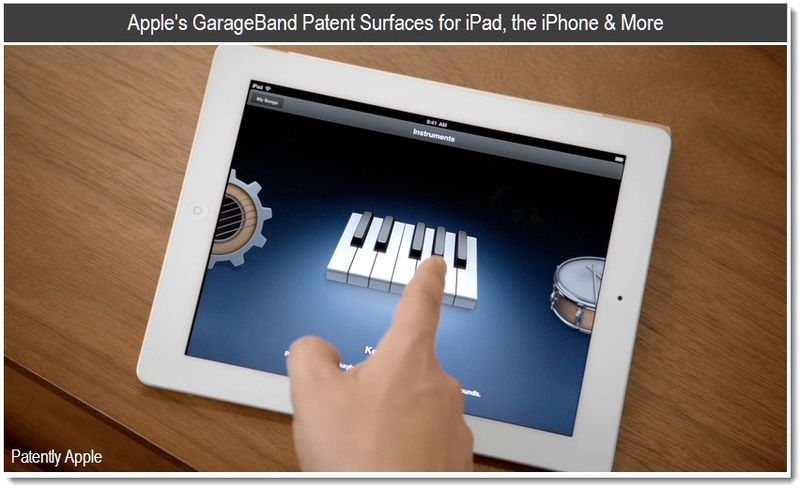 During Apple's March 02 iPad 2 Event, Apple's director of music marketing Xander Soren took to the stage around the 23 minute mark to present GarageBand's new interactive touch screen features. During his presentation he showed off some new features that will let mere mortals play the drums by simply tapping on the new iPad. You get a very cool view of the drum set as if you were sitting behind them as you could handily see below. 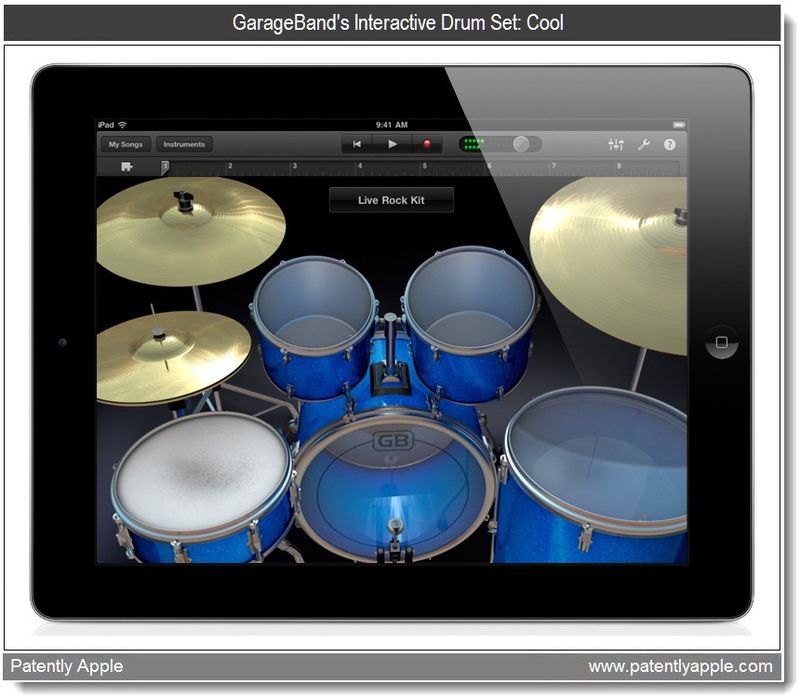 Mr. Soren explained that the user would be able to tap on the drum or symbol lightly and get one sound and if hit harder you'd get another. This effect applies to all of the instruments that he presented in his demo including the piano, synthesizer and guitar. That sound-range effect is achieved by using Apple's built-in accelerometer that measures the force of each tap you make. It's just as important on a piano as it is a drum to get that range to make it sound realistic.

In one of 50 Apple patents published the day after Apple's special iPad 2 event, Patently Apple discovered a key GarageBand patent that let us in on another key technology built into GarageBand that supports the ability to go from a low energy signal to a high energy signal. Apple's patent states that "An onset may be detected in the audio signal as a transition from low energy to high energy. Such energy transition may correlate to musical actions, such as playing a note on a keyboard, striking a drum, or strumming a guitar string." The onset detection described in Apple's patent "could include exact representation of a target audio signal that facilitates identification of the onsets and specific peak selection routines developed to accurately and automatically identify musically important events."

While this technology about tone range is certainly interesting, the real catch of this patent revolves around the fact that Apple's GarageBand has been reengineered for touch displays and not only for the iPad.

GarageBand for All iOS Devices As you could see in patent FIG. 4, Apple presents us with a block diagram of a system for detecting onsets in a target audio signal in the time domain. Yet the key to this patent figure is found in Patent Point # 492 as outlined in yellow above. According to Apple's patent "the data processing system could include one or more computers (e.g., a desktop computer, a laptop), a smartphone, personal digital assistant, etc."

Of course the referenced "smartphone" is in fact the iPhone and the "personal digital assistant" is in fact Apple's iPod touch. So while it's obvious that GarageBand is coming to the iPad, you now know that it's very likley headed for other iOS devices in the not too distant future. .

The touch screen, according to Apple's patent, could detect contact and movement using any of multiple touch sensitivity technologies, including but not limited to capacitive, resistive, infrared, and surface acoustic wave technologies, as well as other proximity sensor arrays or other elements for determining one or more points of contact with the touch screen.

Apple's patent was published on March 03, 2011 and originally filed in Q3 2009. Guitar-strap and drum sticks not included. 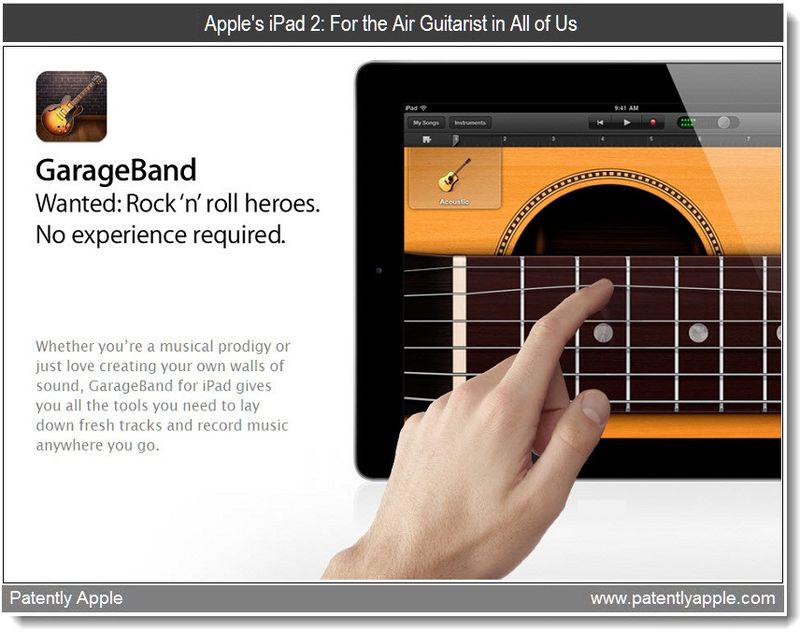