Apple's AirPlay May Stem from an Old Home Automation Patent 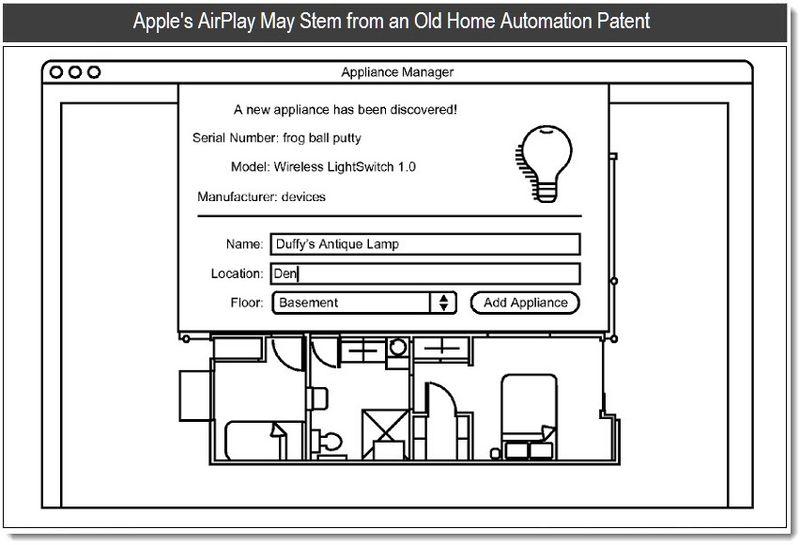 In our last granted patent report of the day, we generally explore a rather old yet important patent; One that will provide you with a rudimentary overview of Apple's longer term ambitions of automating both our home and office environments. And yet, in the short term, Apple's patent allows us to see some of the thinking that likely went into their AirPlay feature. In fact, if the illustrations that are presented in this patent ever pan out, then it's obvious that Apple will use a method like Airplay to further automate our various environments beyond the living room. Yet something tells me that home automation is going to take much longer than any of us want to admit.

Apple's patent goes all the way back to 2004 which in technology years is a lifetime. The patent points to ancient technologies such as X10, iReady, UPnP and even 802.11b which I believe dates back to 1999. Apple's patent shows the drawbacks to these approaches to home automation and then provides their solution to the home automation mess that we're still currently in for the most part.

According to Apple's patent, their invention is to provide systems and methods for managing and controlling networked devices. In one embodiment, a system comprises a host application executing on, for example, a personal computer, and one or more networked devices executing a client application. A networked device could include a consumer appliance equipped with network capability, a digital device such as MP3 players and DVRs.

As the patent description unfolds, you begin to see that this could have been the founding blocks for Apple's various attempts at rudimentary home device automation. It began with Apple TV, moved on to Apple Remote and now unto AirPlay. The interfaces that are shown in this patent's various patent figures provides us with hints of something like AirPlay, except that it goes much further; Meaning that the patent doesn't only focus on TV oriented entertainment but rather a kind of master plan for complete home automation over time as clearly shown in Patent FIG. 8 below. 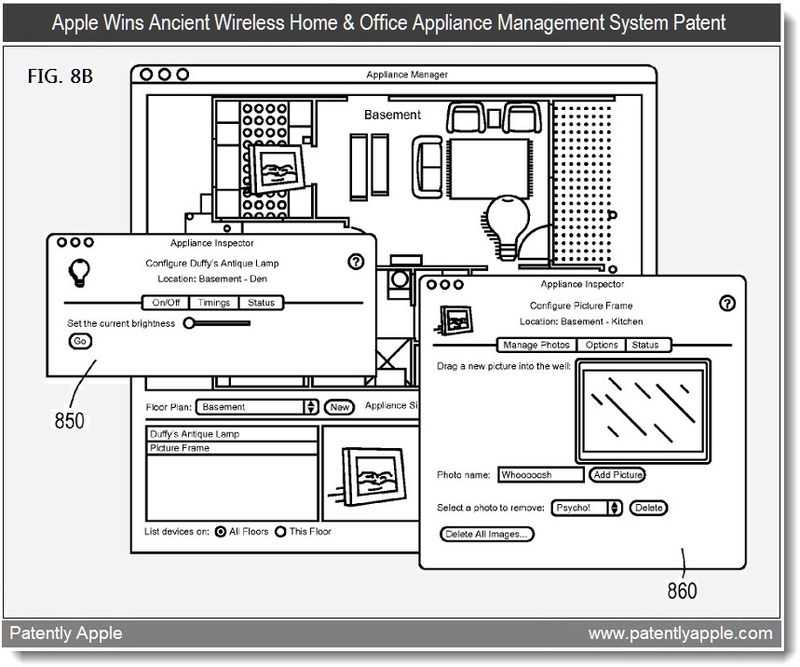 Specifically Apple's FIGS. 8B is a schematic diagram illustrating an example of control and management of networked devices in a user interface including a floor plan. Below are three typical use case scenarios that Apple provides us with.

In another home automation system for controlling a lighting system, a number of inexpensive wall boxes are plugged into an AC outlet and provide their own outlet that is controllable using the present invention. Using this intermediary switch allows the user to use existing antique lamps. The first time that the user plugs these devices in between lamps and AC outlets, the user interface opens on a laptop, which connects to the wireless network via a wireless networking card. All ten of the switching devices are automatically discovered, and the user is asked to specify the location of each one. The user then configures two modes for how the lights should behave, one for everyday use in which the switches are on during the day (and controllable from the lamp itself) but switch off at 11 PM, and a second mode for vacation, in which the ten switches turn the connected lamps on at random intervals around sunrise and would-be bedtime at 11 PM. Then, when the user goes on vacation, using a single command from the host application, the mode on each switch can be changed instantly. 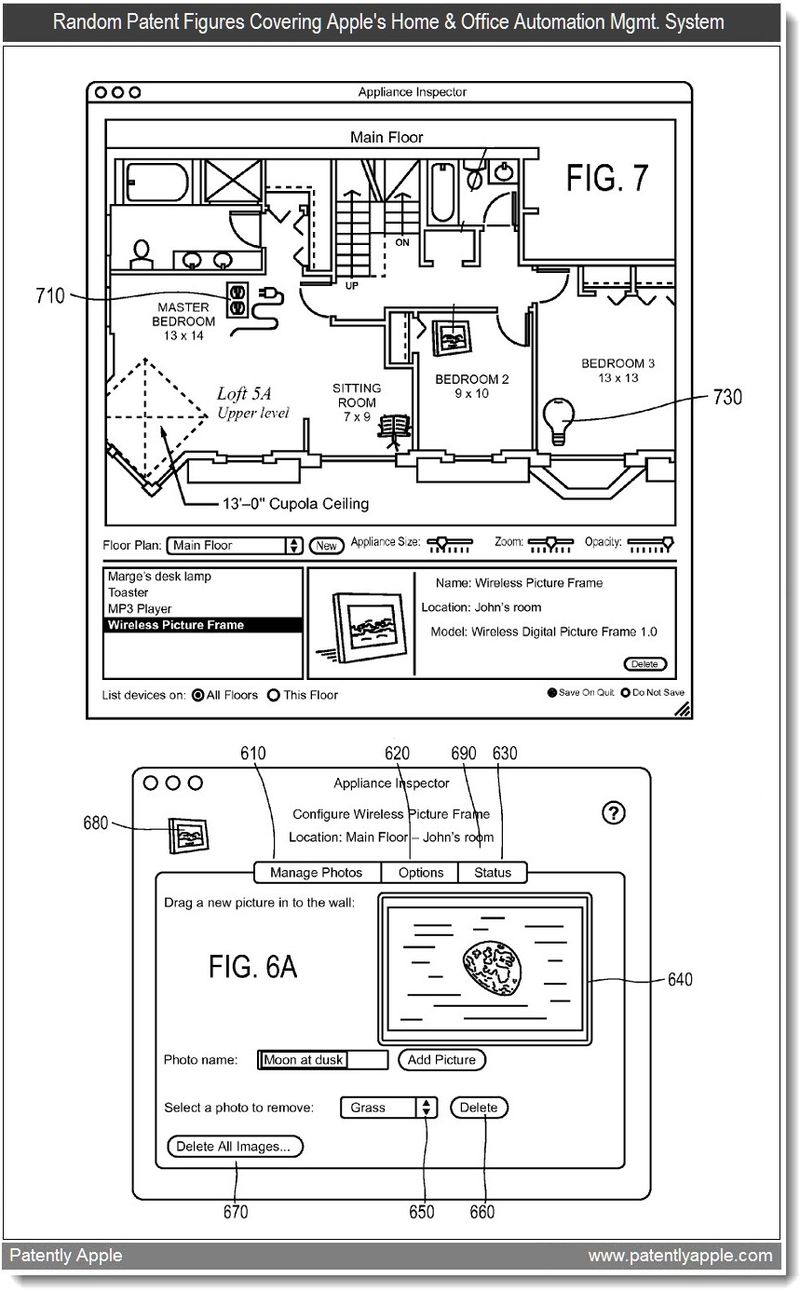 In an office system, daily tasks are automated such as starting the coffee machine in the morning and the dishwasher in the evening. A dishwasher is adapted according to the present invention. A switching device could be a power outlet strip with an electrical output for receiving the electrical plug of the coffee machine, the power outlet strip controlling power to the outlet. The coffee machine is plugged into the switching device, which in turn is plugged into the wall outlet. Now, the user could use a PDA device executing the host application to set up all of the office devices to turn on and off at specific times. To configure, the user opens the host application and the devices are discovered automatically.

In the Big Picture – It's Evolutionary to be Sure

Another piece of the home automation puzzle was published in a 2010 patent covering a Home Energy Dashboard Management System. The two patents combiined go a long way to illustrate that Apple has a longer game plan in mind for home automation. It's evident that this kind of major project will move glacially as a number of missing technologies and networks are in transition and yet to come. We're bound to see WiMAX, Thunderbolt, LTE, NFC and other pieces of the home automation puzzle unfold … ever so slowly.

This is a huge technological arena that could take a decade to solve – and even that may be too optimistic. But if you're a geek, you'll love every twist and turn that Apple takes to get us to the promised land of home automation. We covered some futuristic ideas in our Augmented Reality report and we've also touched on others in our various special reports over the years. And – we may even have a few more patents on this subject that we'll work on over the summer that point to yet wilder ambitions of Apple's in this area of home automation.

Apple's patent FIG. 6B shown below is a schematic diagram illustrating a user interface example. The "Appliance Inspector" concept displayed in this 2004 patent could have been the precursor to Apple's latest AirPlay feature. Today's AirPlay is a simple way to send content to Apple TV and in the future it'll work with a number of leading HDTV's directly. Once the consumer is familiar with using features like AirPlay on their iPad, Apple could theoretically push further into the home automation via an easy-to-use home energy system as we pointed to earlier. During IDF 2010 Intel introduced their home energy console prototype as a wall fixture. Apple is likely to integrate it right into a future version of the iPad. It'll use a simple form of AirPlay. Meaning that Apple will provide a simple, easy-to-use interface to call up another home appliance and control it over-the-air. Why run all the way downstairs to turn up the heat or downstairs to turn off a light when you'll be able to do these simple tasks at your convenience on your iPad? It sure sounds simple on paper, but I'm sure it's going to take a little more time to work it all out and be market ready.

Apple's granted patent 7,917,661 is an interesting patent to review if you're love the tiniest of details. Just keep in mind that a lot of this is somewhat outdated. Then again, it provides a decent basic overview of what's on Apple's mind. Apple credits Clay Bavor and Jesse Levinson as the inventors. While the patent was filed in April 2010, it should be noted that the history of this patent dates back to 2004.