In case you haven't caught on yet, there's a multi-touch centric device revolution going on. Late this morning, HP entered the ring (Update: see the new TouchPad Video) and this heavyweight is out for blood and marketshare. While the latter will suffice, the point is that the market that was once Apple's alone, is about to dramatically change. HP's latest round of trademarks points to a duo-display type of unit that's on the way and they're going to provide consumers with a lot more diversity in terms of design and price points. And joking aside, even Motorola is now on the warpath. In order for Apple to Keep their edge on these competitors, they're going to have to kick things up a notch on all things touch. In a new batch of patents that have come to light, we see that Apple is focused on bringing OLED displays to iOS and other types of devices sometime in the coming months or years.

OLED Displays: To Drool For!

In late January 2011, PC Magazine's Michael Miller of the Think Forward Blog stated that he's "often asked why we don't really see OLED TVs or OLED notebook computers. The answer is usually pretty simple: no one has built the equipment to make such display panels yet…" He later points to Samsung preparing OLED displays for their Galaxy line up of tablets. It makes me a little envious just thinking about that.

But then I remembered that there were some rumors starting to surface in and about October last year concerning Apple entering a joint-venture for a display plant with Toshiba. That rumor was quickly killed only to be replaced by another rumor about the deal being with Sharp in mid December. Huh, that's about the exact timeframe when three Apple patents surfaced detailing Apple's work on OLED displays.

In Apple's patent FIG. 1 of their main OLED display patent shown below, Apple confirms that the device illustrated is a handheld or tablet. Yet like all patents, Apple tells us that their technology isn't limited to that of a tablet device and that their OLED display technology will of course apply to other devices such as an iPhone (mobile phone), iPod touch (personal digital assistant PDA), a computing system (e.g. MacBook) and an Apple TV (a set top box).

Say what? Unless the set top box is integrated into an HDTV – I don't really get where an OLED display would come into play in an Apple TV in its current form. I don't know about you, but that latter image is now stuck in my head. I mean, why in the heck did Apple throw that into that mix of products in that manner? Perhaps it'll all make sense in the future. For now it's just a strange oddity …or is it? 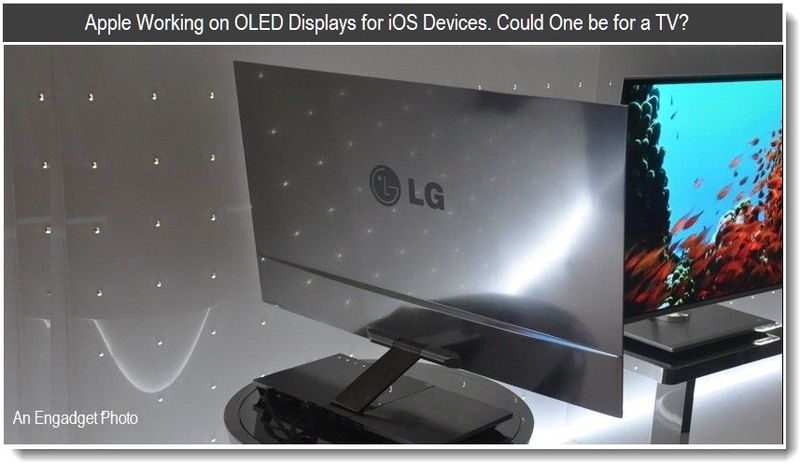 OLED based TV's are drool devices and you could check out more these photos of LG's cool OLED TV over at Engadget. I could only imagine this kind of design for a new iMac. Once Steve pulls the plug on the optical drive, super thin designs could emerge with OLED displays. Imagine an iMac touch with this design. Light and easy to tilt: it would be a dream machine. Well, we know it's the future, but just what that actually means is a little up in the air at present.

At the end of the day, the multi-touch wars are about to get underway in earnest. Apple has to raise the bar, Rock'n Roll and take us on a magic carpet ride. Okay, I'll settle for an OLED iPad, Apple HDTV or ultra thin iMac instead. What we'll actually end up with in 2011/2012 – remains to be seen. But I think that we all know that it's going to get really interesting as the year moves on. For now, I've listed Apple's three OLED patents below for you to check out if that interests you. But be forewarned, the patents are a bit technical and without purpose in mind. There's little to no guidance as to what Apple is thinking. It's really about the raw technological basics. But it's sure nice to know that OLED is at least on the table.

Apple's primary OLED patent is found under application 20100321305. Apple's patent is generally about driving an OLED display structure that is integrated with a touch sensor configuration. Patent figures 1,3,4,5 and 10 shown below in the first two graphic sets belong to this patent and are presented for the convenience of those who wish to further explore this patent in greater detail.

Apple's patent application 20100265187 is about an invention that generally relates to signal routing for an organic light emitting diode (OLED) structure that includes a touch actuated sensor configuration. Our third and last graphic set below stems from that patent and highlights the main components for those wishing to explore this patent further.

A third patent in this group could be found under application 20100265188. This patent generally relates to the integration of a touch actuated sensor configuration with an organic light emitting diode (OLED) structure. The graphics were basically identical to the '187 patent above. 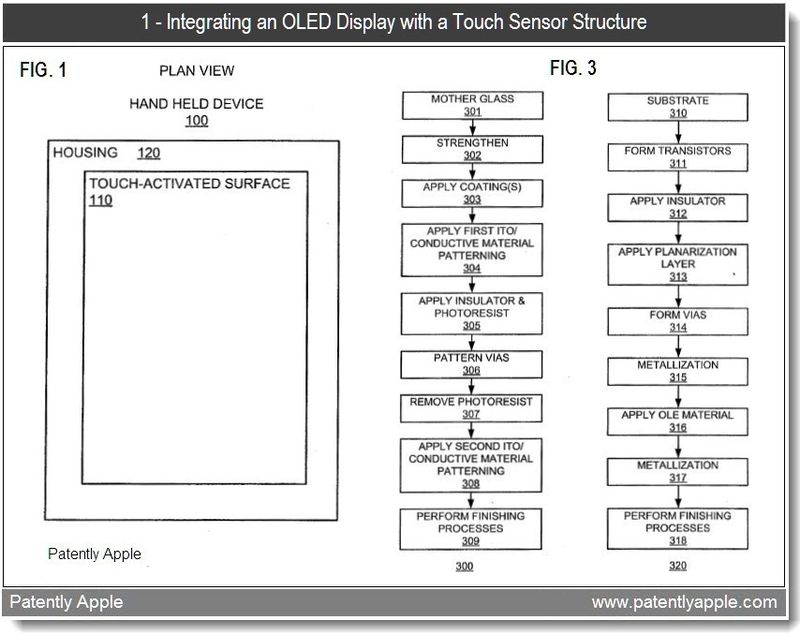 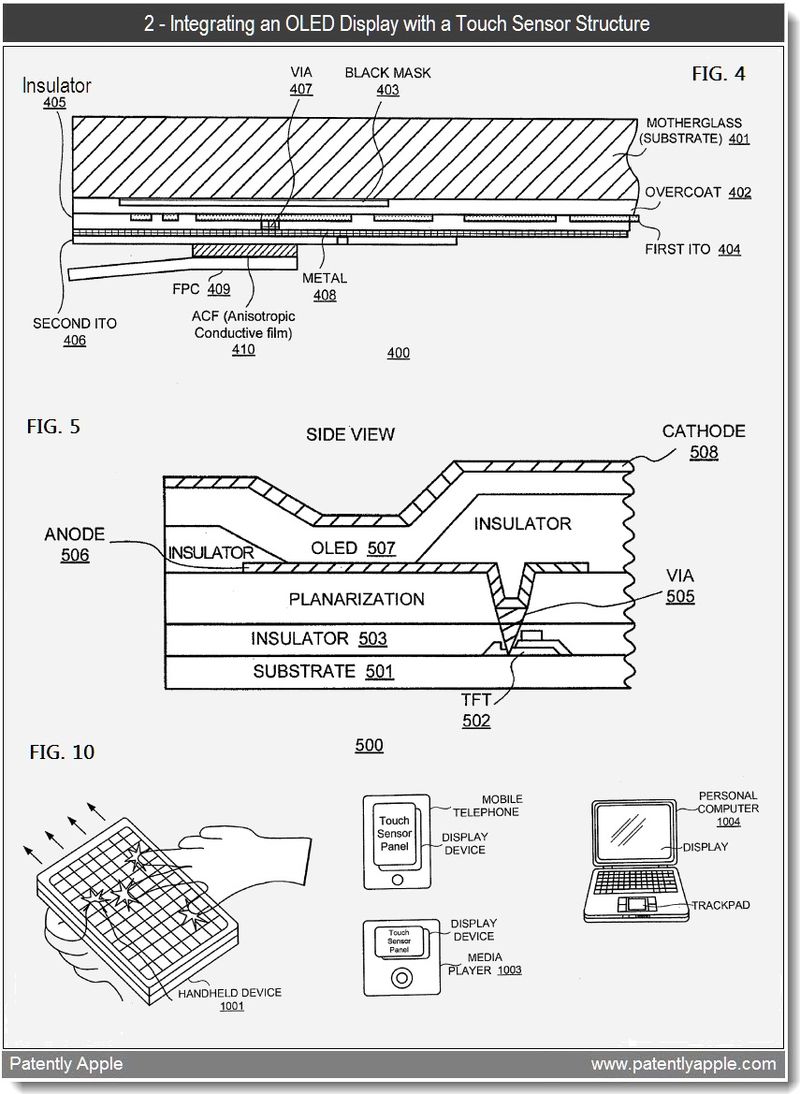 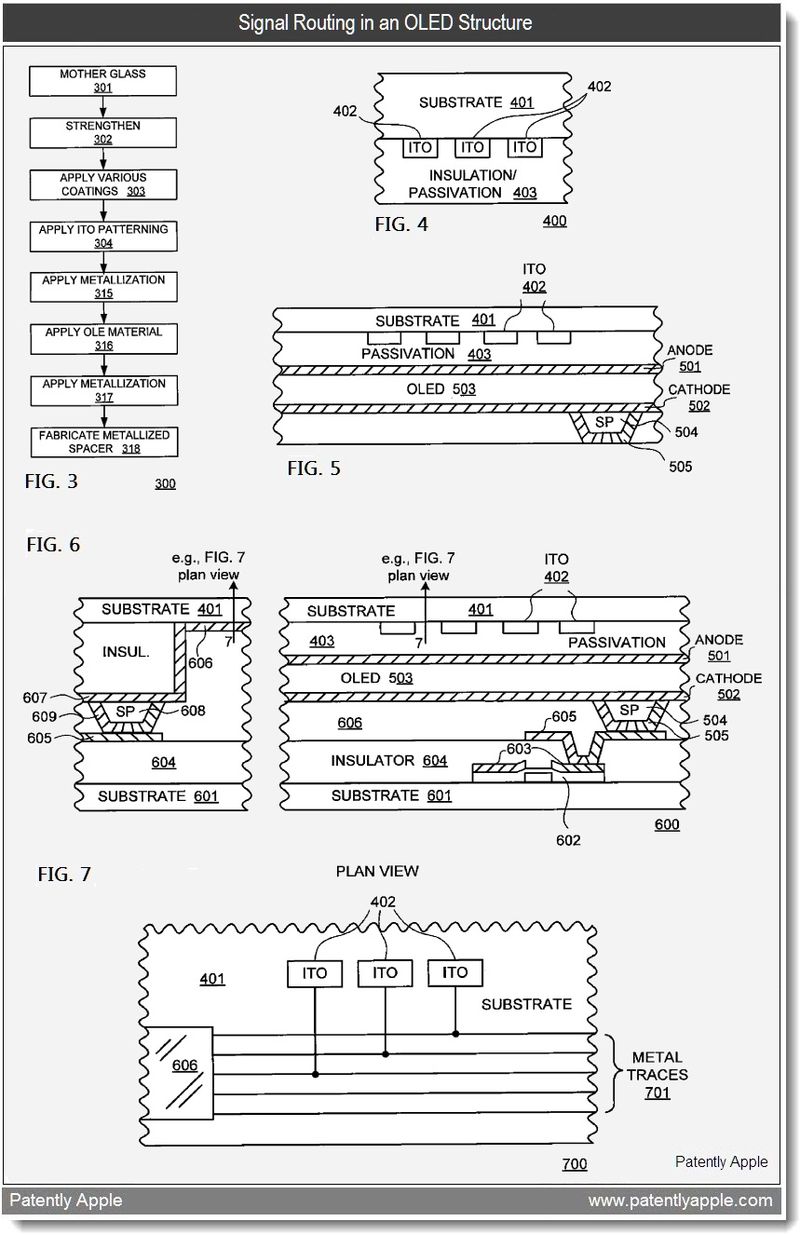 Also see other report that we posted yesterday about Apple Considering New Hovering Capabilities for Future iOS Devices. It's just more proof that we're going to see all kinds of great competing ideas flying out Cupertino on all things multi-touch in the months and years ahead. Not all of these ideas will be able to come to market, so it'll be fun to follow Apple's various corridors of endeavor while debating with friends and colleagues as to which of these could win the day.

Sidenote: HP's WebOS event is over. The TouchPad is quite nice and they'll be offering NFC features as well as new wireless charging which is very nice. WebOS will also be coming to HP desktops and notebooks later this year (I believe) which was a surprise to hear. My hat goes off to Jon Rubinstein and his team for a great job. You came from Apple and that class is evident on your new website, in your new TouchPad and even how you conducted your keynote. There's nothing wrong with a classy competitor - even though we'll kick your butt. I see you smiling: Cheers Jon!

Samsung to use OLED in 2012 smartphones

So far, only Samsung has figured out a way to make those panels at a profit (<4" only), after 10 years of mass production activities and 100's of millions in losses. All others who have tested the waters have failed. The bright side though is that many companies are still actively developing this technology and are putting resources into research and production facilities.

Great News!
In the next few days we'll be publishing an interview with Barry young the managing director of OLED-Association. He may give us some insider information about Apples OLED goals.