Apple Toying with a New Navigational Bar for AppleTV

Earlier this month, the US Patent & Trademark Office published a patent application from Apple that revealed one of the possible next chapters for AppleTV. Although Apple continually insists that AppleTV is nothing more than a hobby of theirs, their R&D via patents is showing us another story. It appears that Apple is continually advancing future possibilities for AppleTV on a regular basis. In today's patent report we take a look at Apple's latest vision for AppleTV that will put more relevant data at your fingertips. Let's say that you like a tune that you're hearing on the latest episode of House or Fringe. You'll be able to put the scene on pause and have a new navigational bar appear that will give you the option of finding the data on that tune in one click. Apple's latest AppleTV patent lists eight new possible data options that could make watching TV more fun in the future.

Apple's latest AppleTV related invention is directed to a system and method for playing, pausing, viewing, and controlling content that substantially obviates one or more problems due to limitations and disadvantages of current systems.

Getting to the heart of the patent, we see in patent FIG. 2 an illustration of a future AppleTV put on hold or "paused" and a new navigational bar appearing. One of the first new options that we may see is that of a triple-paned media player window which presents us with the previous scene and next scene in the windows to the left and right of the main content window. While that could be fun for instant replays of a sporting game that you've filmed or downloaded, the real fun may begin with the navigational bar options highlighted below. 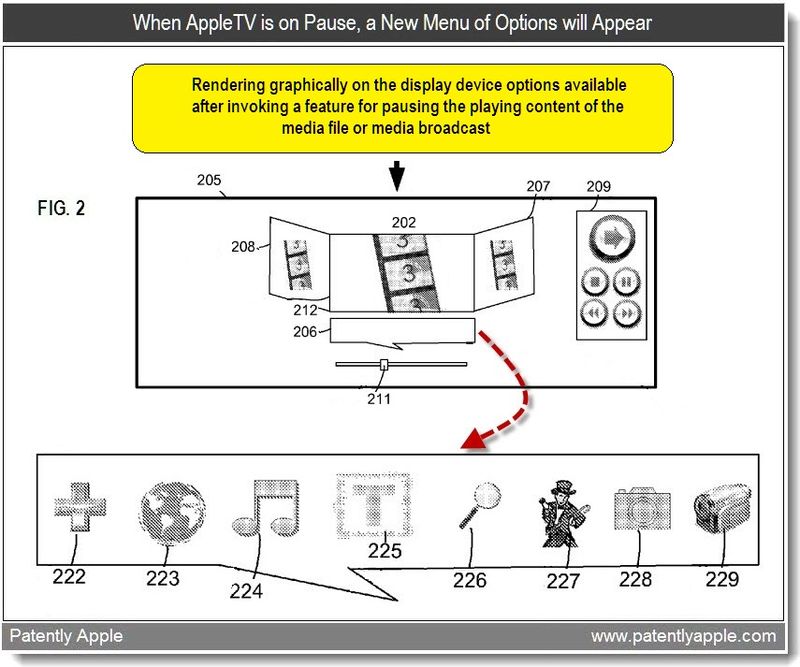 Other options shown in figure two's new navigation bar include #223 that could show you geographic locations where a particular scene was filmed; #224 for identifying audio tracks or songs in a scene; # 225 will provide the user with the ability to enter text that may relate to the search feature noted as #226 – though the text feature may be used for other purposes not really identified in the patent. Perhaps a social-networking ability will be associated with this, as in being able to text friends during a live broadcast (e.g. hey, what a touchdown – did you see that!)

The metadata that resides in a movie or TV program could contain descriptive information allowing you to search persons or actors in a scene using icon #227. Apple's icon #228 and 229 relate to media outtakes which might be fun to watch.

I don't know about you, but being able to identify audio tracks in one click would be a top feature for me. I don't know how many times I've heard a great tune on a popular program and just couldn't find the tune anywhere in the credits or online! Another favorite would be the location data. How many times have you seen a great lake, mountain or city in a program and wondered where they filmed it so that you could check it out as a possible future holiday destination.

The proposed AppleTV navigation bar, at first glance, could fit in pretty nicely with the Apple Remote app, especially if the icons are a decent size for touch controls.

In the future, we may even see real-time informative TV features emerge. Intel described this feature back at IDF 2009 in relation to future versions of their Sandy Bridge CPU architecture. Informative TV will allow a user to click on any member of a sporting team (like football, soccer, and hockey) in action and get their latest stats pulled up on your TV screen.

With competition like Boxee on Apple's tail, Apple has to raise the bar for AppleTV every year. They have to start thinking about tightly tying in social networking into AppleTV like Boxee does with Ping and Places. This patent shows us that there's a text option. However, Apple should take that option further than just using it for searches and and tie it into texting in relation to social networking. It would shine even better if AppleTV's texting option would work with Live TV programming so that you and your friends could keep in touch throughout your favorite shows and chat it up during the commercials.

Apple has the components to create a better AppleTV product over time. Apple has to integrate AppleTV with iOS so that consumers have access to the App Store and the ability to run their favorite apps on AppleTV. And for this to really take off, Apple has to bend and allow users to access live TV. I may be dreaming on that point, I know, but it's a real stickler for most people.

Yet at the end of the day we welcome some of the fresh new ideas that Apple is exploring in this patent. We would just prefer AppleTV to be on Apple's revolutionary product list rather than on the evolutionary track that it's currently on. And I don't think I'm alone on that point. Here's to hoping for a better Apple TV experience in the future.

Apple credits Windy Chien, Robert Kondrk, Gary Stewart and Jeff Southard as the inventors of this patent application which was filed earlier this month and originally filed with the USPTO in Q3 2010.

@Chris. While it's not the same thing in the big picture, it's nevertheless a great point in the short term, Chris. Thanks for the comment.

Jack
Song title and group is often displayed when closed captioning is on.