Apple in the Sky with Diamonds: A Cloud Based Safe Deposit Box

With OS X nearing its launch this summer, we just might have gotten a glimpse at either a Time Machine or MobileMe upgrade in one of this week's patents. Apple wants to beef up sensitive document security for average consumers and they want to do it in a way that will get consumers used to trusting Apple branded cloud based software and/or services. Even if you don't have sensitive documents like a Living Will or Home Insurance Policy that you want to protect, everyone wants to protect their investment in iTunes! You've invested a lot of money in your music, movies, books and app purchases – and that's reason enough to want to use this upcoming new feature relating to a virtual safe deposit box. While there may not be diamonds in the sky as the Beatles once described, the cloud is where the industry thinks the money is heading in the future. And with that in mind, Apple wants consumers to trust them on this front early on, beginning with a friendly little app called the safe deposit box.

An Overview of Apple's Patent

Advantages perceived by this invention include first and foremost that files could be securely stored and that copies of important files could be automatically generated and protected. In addition, file loss could be minimized; confidential information within a file could be protected; users could more easily secure the files that matter the most to them; users could be provided with an interface for protecting valuables that mimics a physical safe deposit box at a bank, a personal safe, or another way of safekeeping valuables. And lastly, the safe deposit box interface could allow access to files for only short periods of time to minimize the risk of an unauthorized user viewing the files.

In some implementations, the safe deposit box program takes various actions to further secure the file from one, or both, of two main dangers: someone without authorization accessing the file, and a physical loss of the file due to failure of a storage device storing the file.

In some implementations, the safe deposit box program copies the file to a secure location and deletes or securely deletes the original version of the file. Secure deletion is performed, for example, by overwriting the file with alternating patterns of data that make it difficult to recover the file. An example standard for secure deletion is the U.S. Department of Defense standard 5220.22-M.

One of the key attributes or selling points of Apple's Safe Deposit Box Application or OS X feature is that your digital valuables could be stored "off site" or beyond the home computer to safeguard your digital valuables which could be something like a Will or Living Will, agreements, life insurance policies, home insurance policies, a simple home inventory list or video or perhaps something that's really valuable to most every iTunes fan: a copy of your iTunes Library. 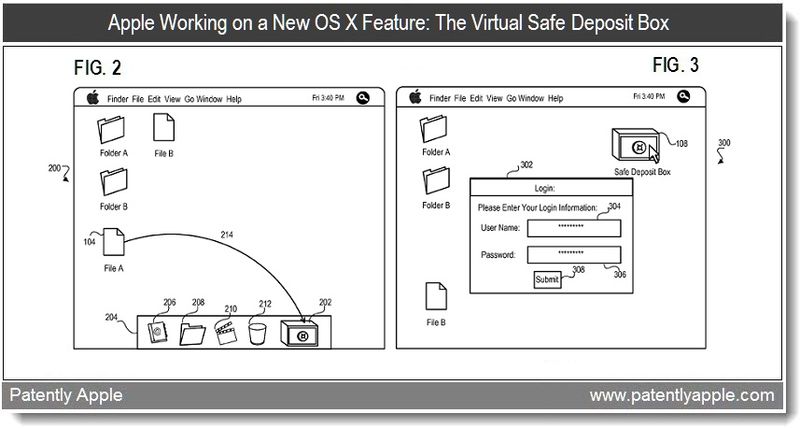 Without a doubt, Apple will either include it in Time Machine with OS X Lion or consider it as a separate pro-like app the way that Apple has iPhoto and Aperture for more value. Personally, I think it should be one of the perks for adopting OS X Lion. It's a value proposition and one that will ease everyone, young and old, into trusting "cloud" based services. Then again, Apple may decide to slide this feature into MobileMe so as to push more business its way and expand their cloud services. Time will tell.

Apple usually adds little notable features to their apps just to show that they still have a pulse, unlike La Garbage Co. from Redmond. One cute OS X feature relates to removing apps from the dock. When doing so, there's a little puff of smoke action that kicks in so as to notify you that that app has vanished back into your apps folder. That attention to detail is a crowd pleaser with Mac Newbies.

For the Safe Deposit Box, Apple is thinking of adding "a noise mimicking a creaky door swinging open" when you first open the safe deposit box app and some kind of slamming sound like a deep clunk of a heavy vault door when your finished with the app. They also intend to add a tactile element to this sequence for those with touch based iOS devices. 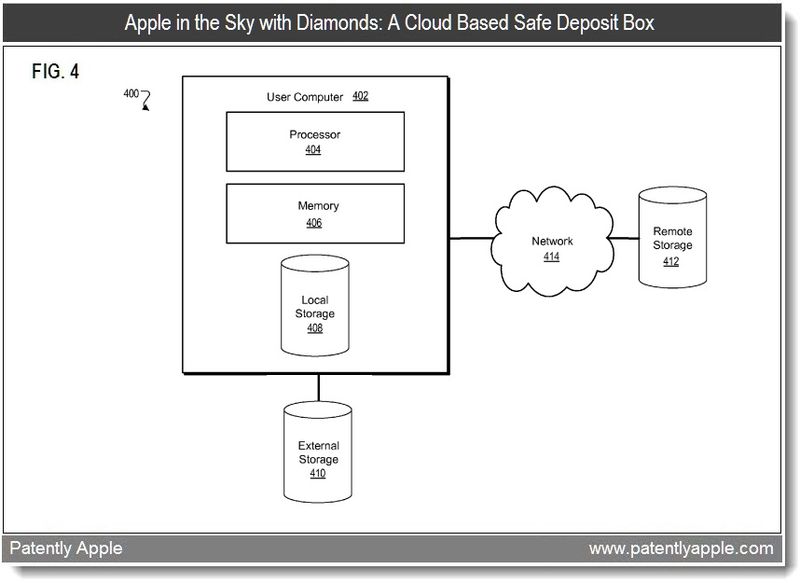 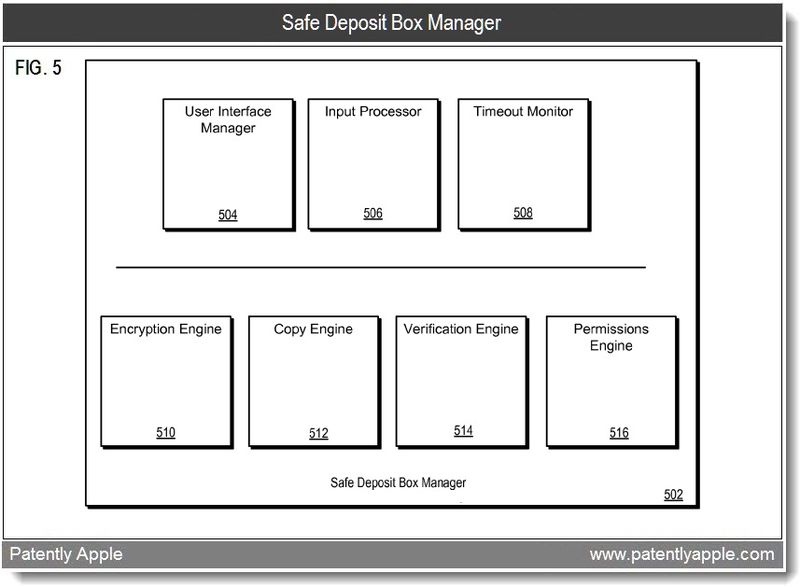 Another Security Patent was Filed this Week

On the serious side of security, we note that the USPTO published an Apple patent titled "Sponge and Hash Functions using a Rubik's Cube Puzzle Process" under application number 20110040977. Apple's patent states that "the present sponge and hash processes are based on the concept and rules of physical Rubik's cube puzzles. The Rubik's cube is a well known three dimensional mechanical puzzle invented by Erno Rubik. It's a cube (so having 6 faces). The sides of the cube are colored. There are 26 miniature cubes that make up the main cube, called cubies or cubelets. A pivot mechanism allows each face of the cube to turn independently to mix up the colors. Each face has 9 sub-faces, arranged 3.times.3 in terms of the cubies. The standard Rubik's cube has 4.33.times.10.sup.19 permutations, so the puzzle is capable of achieving a high degree of randomness. Solving the conventional puzzle requires arranging it so each cube face is all one color." 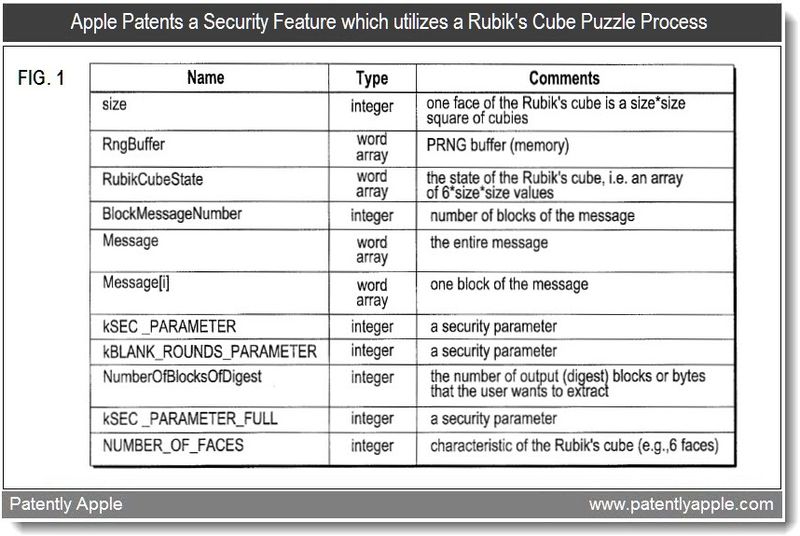 Now – if that sounds like your cup a tea, then simply feed the individual patent number noted above into this search engine to view this patent in full.

Great idea and a welcomed one for off-site storage. I prefer an app like that to come from Apple because I don't want my sensitive data in the hands of some smaller developer company that I have no idea who they are, what their background is or if they'd sell me down the river if they needed money to survive. So I'm happy to see that Apple wants to make saving my iTunes library easier, because I trust them!

You could do this by combining Vault+Dropbox. However, having a native implementation is cool too, but hardly innovative.

I wish they'd use their cloud storage and the new NC data center for iTunes / iPhoto offline storage, and to re-download purchases at will in the future.

Apple could do well with actually remembering all your purchases so they're in the cloud and redownloadable in case of loss locally!

Not entirely sure how they get away with putting a coat of paint on secure file storage/backup? Let's hope it doesn't do what MobileMe can to contacts!