Apple Designs a Future Built-In Stand for the iPad & More

On February 3, 2011, the US Patent & Trademark Office published a patent application from Apple that reveals one of the next chapters for Apple's iPad. A future iPad, according to Apple, may include a built-in stand that could pivot to provide both landscape and portrait support while allowing the unit to be further angled just right for use with the iPad's virtual keyboard. The concept of the new advanced stand supports another recent Apple patent concerning added connectors for a future iPad. Apple's invention could technically eliminate the need for their current docking station.

The Need for a New Kind of Built-In Device-Stand

Various mechanisms have been used for supporting an object. Many objects are provided with a support mechanism that only allows the object to be supported in a single configuration. For objects having a display, the need for a support mechanism adapted to support the object in multiple configurations may be significant. As the market for consumer electronic devices continues to explode, consumers are seeking electronic devices, such as, for example, computers, for which they can have improved display orientations that meet their needs.

Support mechanisms may also be used to generate consumer interest in the product and the brand of the company who produces the product. For example, consumers of some electronic devices tend to be discriminating and savvy, and may choose a product having unique and sleek support mechanisms befitting the underlying technology of the product itself. Accordingly, there is a continuing need for support mechanisms for objects that allow for improved support configurations or that may provide a pleasing aesthetic appearance.

The "object" noted in the patent's introduction is primarily an iPad or "tablet computer and/or "slate computer" as phrased by the patent. However, in the big picture, Apple opens the door to other types of future devices that could incorporate such an advanced device stand. They include the iPhone, television, photograph display device, gaming device, projector – and even as part of some kind of detachable display in respect to a future notebook.

In the noted Patent Figures above we see Apple's proposed built-in stand for the iPad in portrait and landscape modes. Furthermore, the landscape mode could provide a steeper incline to support a virtual keyboard mode that would be comfortable for the user to use in extended periods of time. An Incline similar to the one proposed for a future iMac-Touch.

The proposed stand may be made of metal, such as, for example, stainless steel. Other materials for the stand 100, including, but not limited to, plastic or other suitably durable material may be used.

In Apple's patent FIGS. 29 and 30 shown below, Apple states that the joint (420) may comprise a linkage assembly (440) pivotally connected to the stand and operatively connected to a linkage base (444), which is adapted to rotate within a housing (454). By rotating the linkage base and pivoting the linkage assembly, the stand may be rotated and pivoted through a plurality of positions and may define the position (e.g., angle and orientation) at which the object/device is supported. 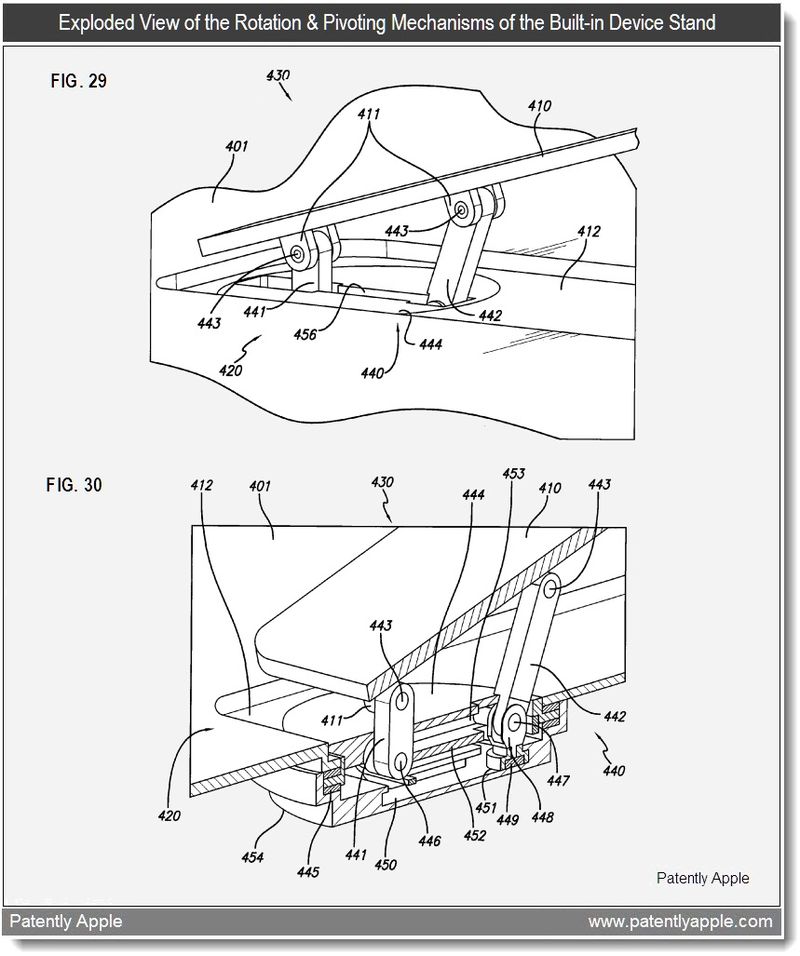 Below you'll find a random selection of patent figures associated with this invention should you wish to look further into the mechanism's minutia. With that said, in patent figure 25, Apple states the recess (110) may be sized and shaped appropriately to receive the stand (100) and allow the stand to be flush with the object (iPad) when the stand is in the closed position so as to provide an aesthetically uniform appearance. In this manner, the object also may be more easily stored or transported. 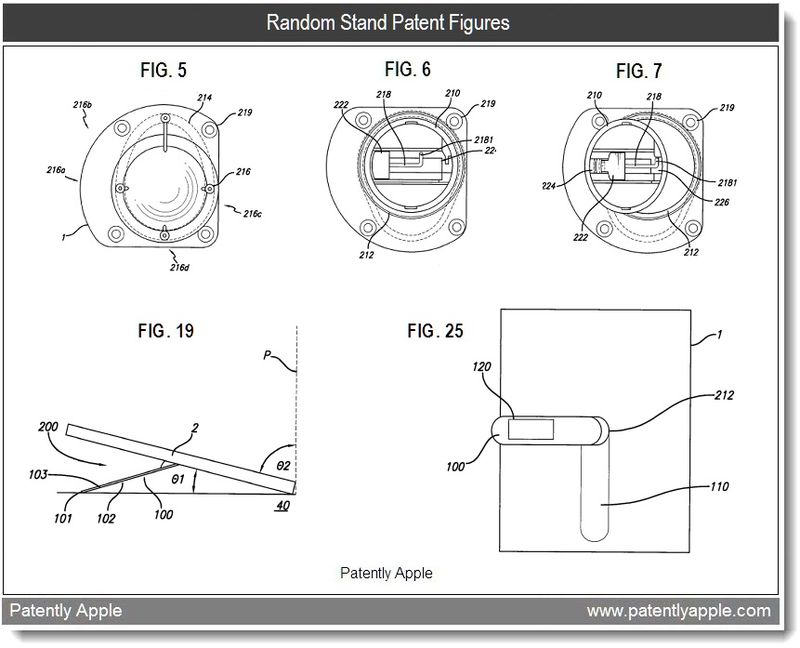 Smarter Playlists: One of the other minor yet interesting patent applications published today involves the next level for smart playlists. However, I found it difficult to distinguish from Apple's current Genius playlist feature - Though it appears to be more integrated with the iTunes Store so that you when you're finished creating your playlist, you could use this new cluster-media feature at the iTunes Store to see if they have suggestions that could provide some new depth to your playlist. That's nothing that interests me, but I could see this being of benefit to music newbies who would appreciate a "bigger picture" perspective on a given genre. 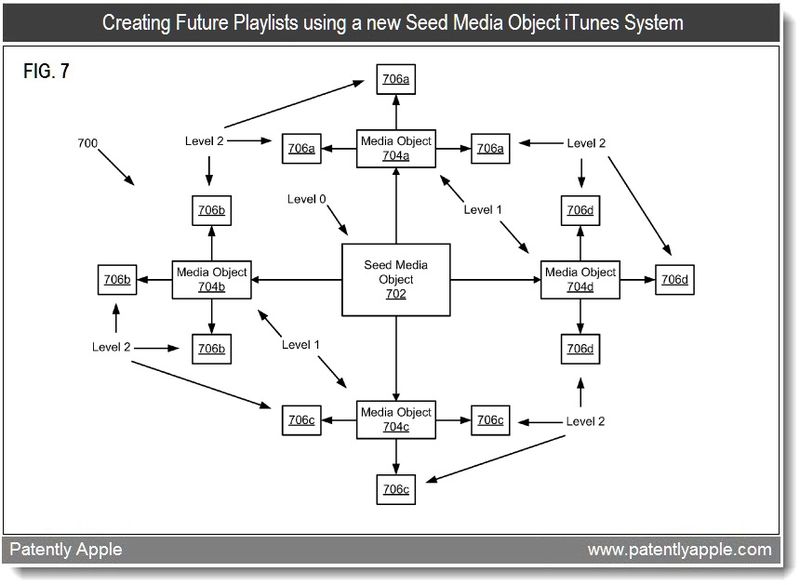 On the other hand, Apple's Patent FIG. 7 noted above, illustrates different levels (0,1 and 2) of a playlist which could actually be reflecting and supporting their futuristic iTunes Spiral concept revealed and detailed in their September and December patents.

If this patent interests you, then check out Apple's patent 20110029928 covering cluster-based medial playlists.

Bluetooth Headset: In another Apple patent published today, we see Apple's old Bluetooth headset patent. Whether this is just a meaningless technical patent process for a dead patent or it's Apple actually toying about taking another shot at this accessory isn't known. Though I suspect the former. Still, if you want to check it out, it's patent 20110028041.

To see any of these patents, simply feed the patent numbers into this search engine.

Great News: Late yesterday (Feb. 4, 2011) the LA Times reported that the FDA approved an image diagnostic app for Apple devices. We covered this important area of technology in our March 2010 report focusing on Body Area Networks. In that report we presented a few videos from the Foothills Medical Center's Stroke Unit in Calgary, Alberta, Canada where this technology is already in use with iPhones.

This is a no brainer for the iPad. Why buy a 3rd party product when Apple's own device could provide the basics of standing up?