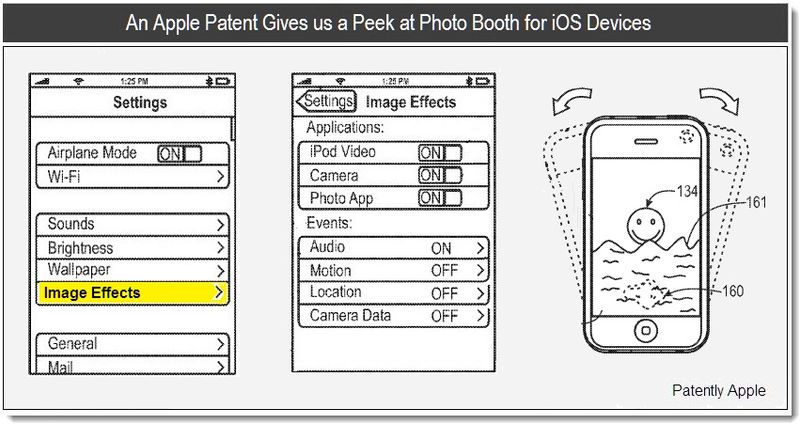 On January 12, 2011, BGR reported that a source had revealed to them that Apple's Photo Booth was coming to the iPad. The very next day 9 to 5 Mac added to this news by stating that they had discovered two new iOS 4.3 frameworks, mainly "PhotoBooth" and PhotoBoothEffects." And today, Patently Apple presents you with a knock out patent report that all but confirms that Photo Booth is indeed coming to the iPad as well as to the iPhone and iPod touch for that matter. In fact, it appears that there's even a major upgrade of Photo Booth being geared up for this summer's debut of OS X Lion that will make it available for all Mac hardware. And considering that it will debut on Macs with Intel's new powerful Sandy Bridge chipset, I'm sure it'll appear like Photo Booth on Steroids!

Apple's patent states that graphics editing applications have become popular with cell phone users of late. Yet in most conventional graphics editing environments, image alteration effects are typically selected and applied manually "on-demand" in response to specific user inputs or requests. Unfortunately, this reliance on continued user inputs may limit the creative gamut of the altered images that may be created.

The relationship between an image alteration effect and a corresponding triggering event(s) may be defined by a user. As will be appreciated, one or more aspects of the image alteration techniques described in this patent is configured via user preference settings, which may be part of a graphical user interface displayed on the electronic device.

There are a lot of conceptual workflow graphics displayed in our report that will provide you with a glimpse of what's to come. It should be understood that Apple will provide us with a slick UI that they're not obligated to disclose in this patent. Nonetheless, you'll get a general idea of what to expect when Photo Booth or variant launches in the future.

Apple's patent FIG. 4 illustrates a schematic block diagram showing a process by which image data is altered by image processing logic in response to one or more device operation events on a device like an iPhone (though it could also be any iOS or OS X device). 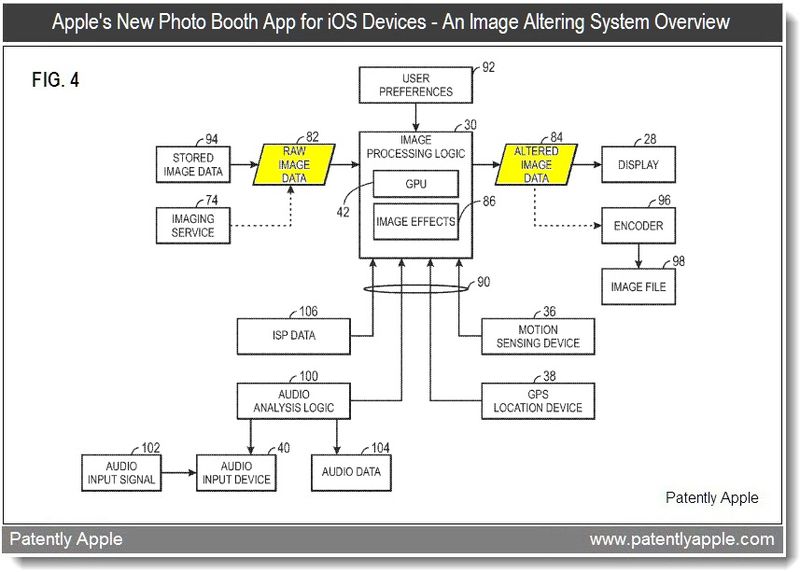 As shown in the illustrated embodiment, input image data, referred to as "raw image data" (#82), may be captured live (e.g., in substantially real time) using camera (#74), or may be played back or viewed from an image file (#94) stored on device 10 (an iPhone). In a further embodiment, the raw image data may be streamed over a network, such as the Internet, in the context of a video conferencing application such as iChat or now FaceTime.

Apple's patent presents us with all-new iPhone camera settings as seen in patent FIGS. 18-20 below. In fact, Apple mentions that they may incorporate Photo Booth Effects into the mix as we see in patent FIG. 20 below listing X-Ray, Glow and Thermal Effects – along with at least one new one they dub "Nightvision." 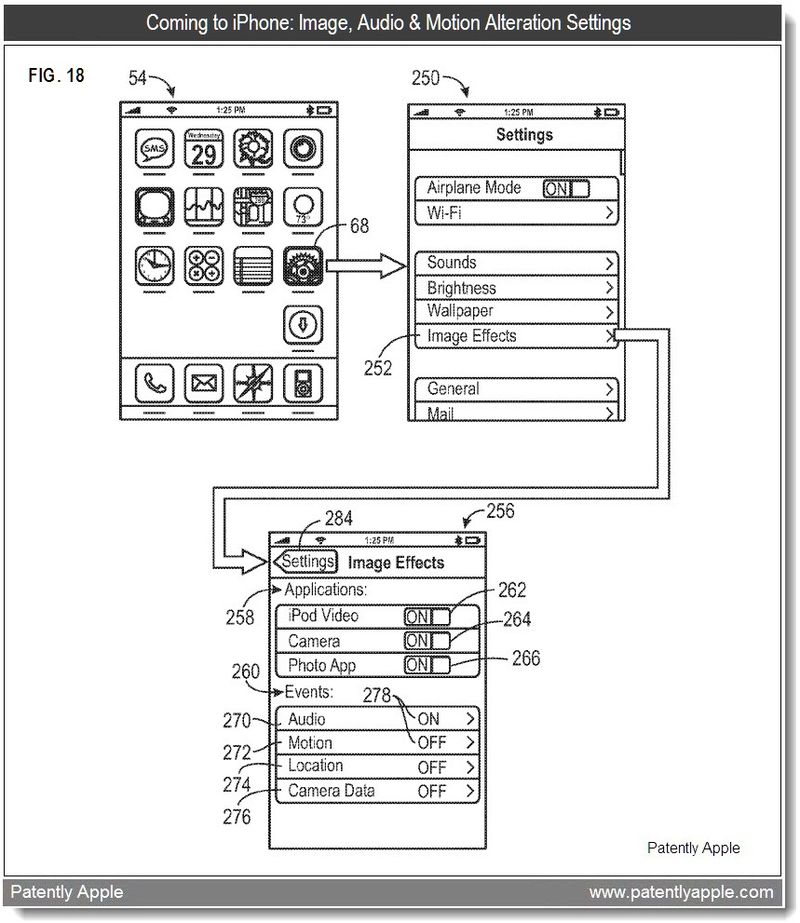 The various imagined screenshots relating to Photo Editing demonstrate the wide array of preference controls and options that you'll have to work with. It begins with choosing "Image Effects," as noted above in FIG. 18. It's located under the current iPhone's "Wallpaper" option. Once you've chosen Image Effects you'll be directed to a whole new series of control options where all of the fun begins. 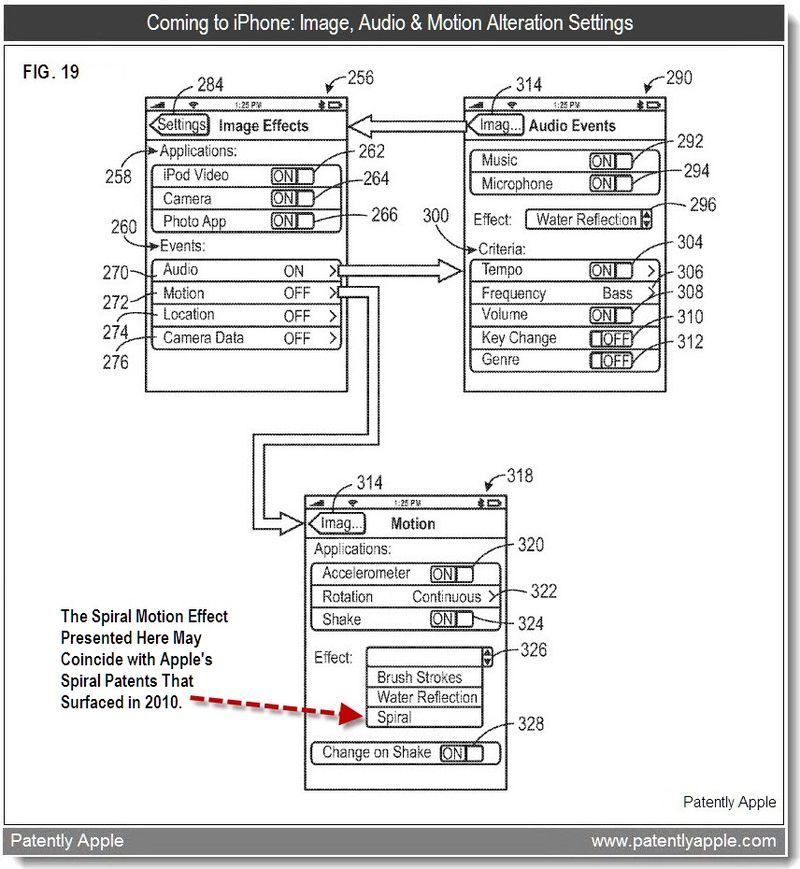 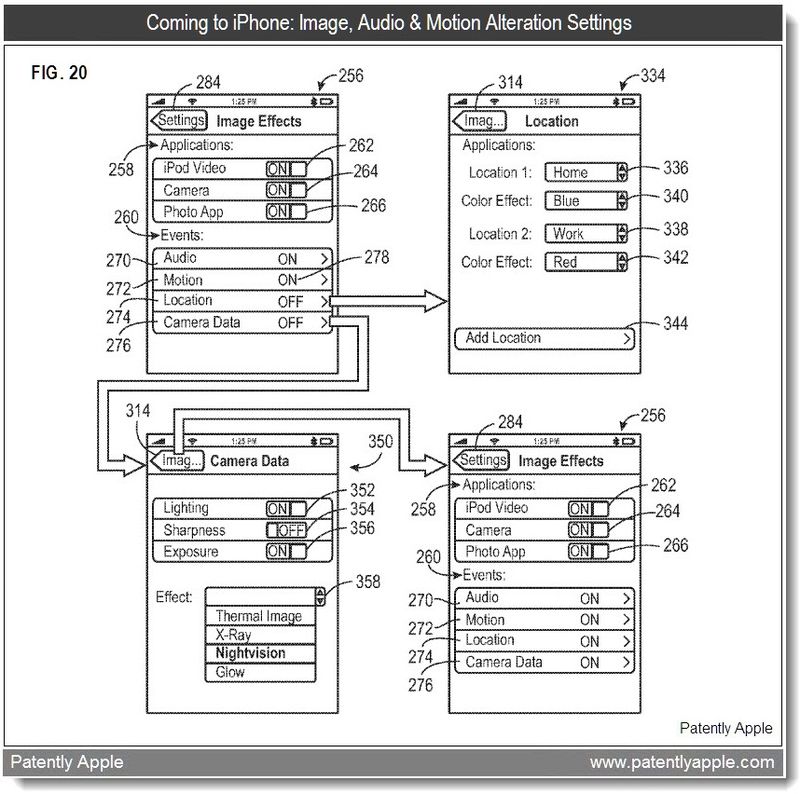 Effect: Shake It Up

Apple's patent FIG. 12 illustrates how an image alteration may be triggered by a "shaking" motion. When you'll shake a chosen image on your iPhone as shown below for given amount of time, you'll be able to change the background color or change to another effect like the spiral (as noted in patent figure 19 above) or to a water reflection or even a zoom effect. The effects also apply to video, according to Apple's patent. What other effects could debut will likely be introduced at the time of the apps release. 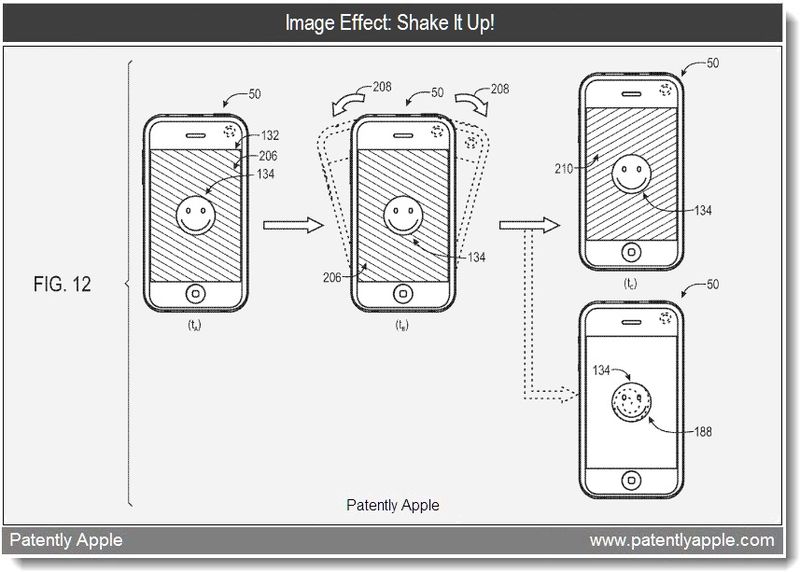 Apple's patent describes other image effects such as Audio, Rotation and Brush Stroke which are noted below in patent FIGS. 10, 11 and 13. Different effects could be triggered by various movements triggered by the user and related to specific effects chosen by the user. 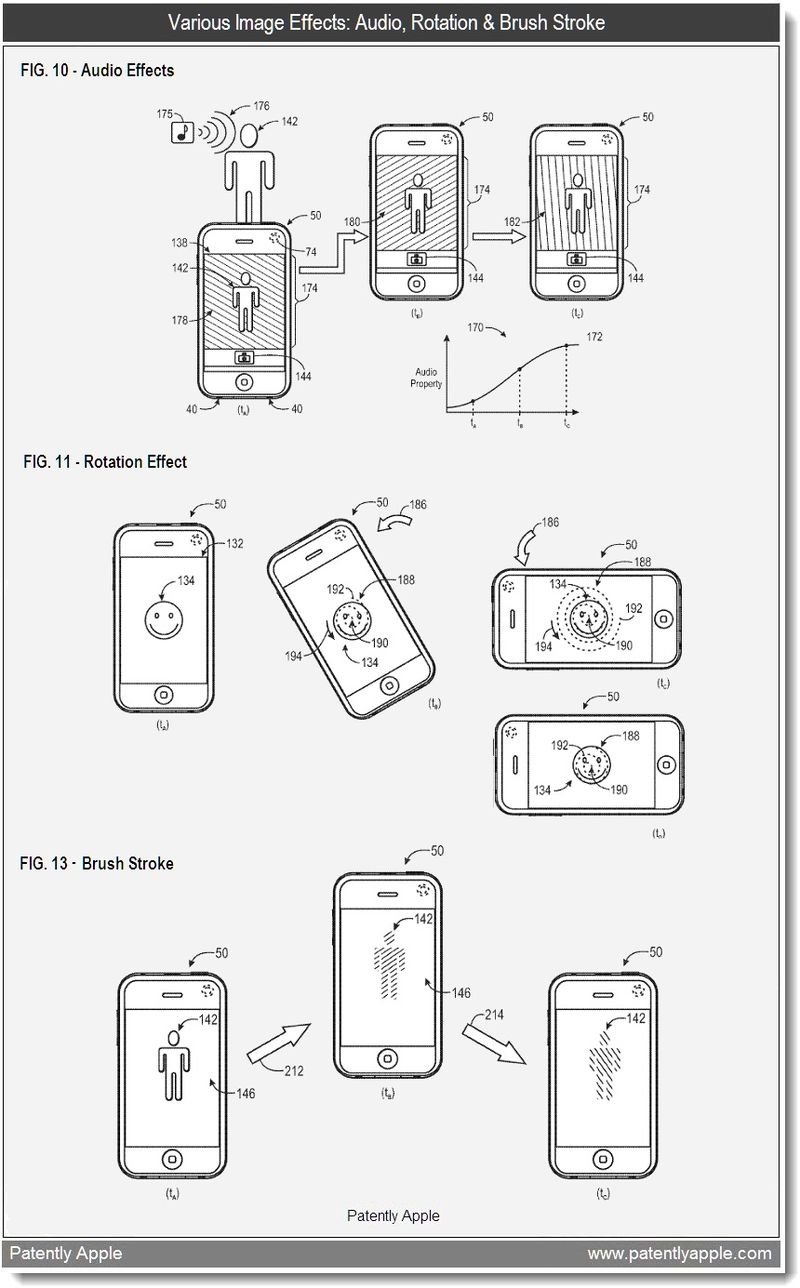 Audio Effects may alter a video simply by the level of bass or treble being played in your video. It almost sounds like an automated iTunes visualizer for the background of your videos.

Other effects could be triggered by your device's built-in GPS. In another response to shaking motion, the turbulence in a water-centric-graphic could increase the amount of ripples or waves in the water or change the reflection of the sun on the water. Most of these effects will have to be seen in a keynote presentation to be appreciated. Many of the graphics in the patent just don't pack the punch needed to help us understand what is truly being conveyed here. 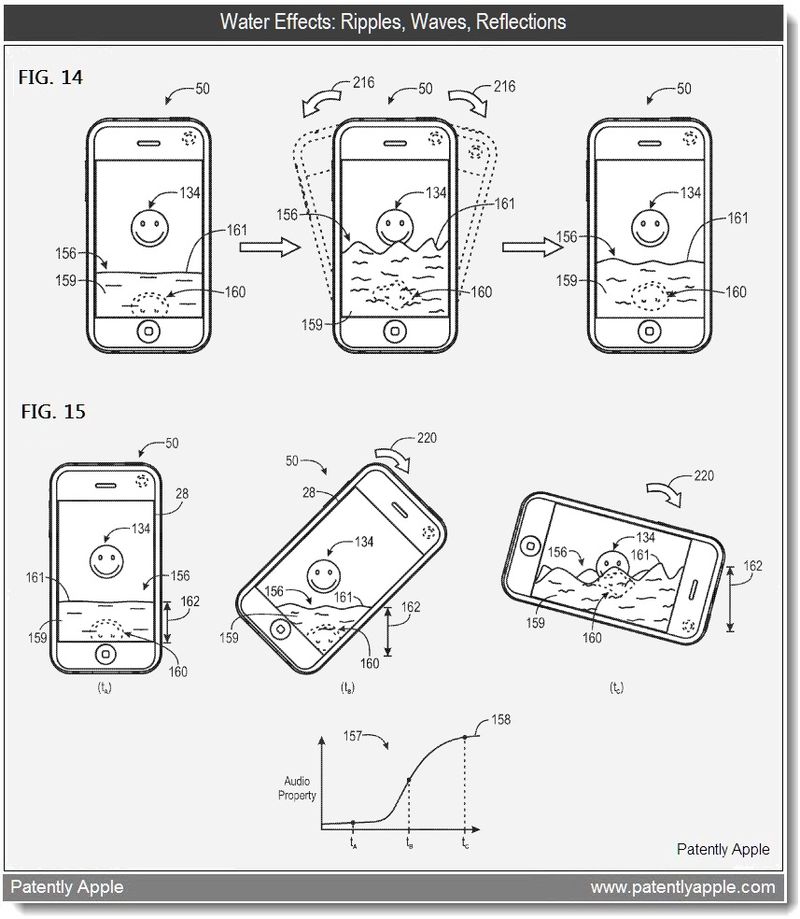 Apple credits Aram Lindahl and Kelvin Chiu as the inventors of this patent application which was published in February 2011 and originally filed in Q3 2009. It should be understood that the patent itself never provides us with a final executiion date. The patent supports the findings presented in 9 to 5 Mac's report concerning iOS 4.3 frameworks and it is Patently Apple's opinion that this should play out this year. Time will tell if we've called it right.

In other Developing News Today

A new Class Action Lawsuit has been filed against Apple this week, but the actual complaint has yet to be made available for review. You'll note that the "complaint" shown below isn't hyperlinked to an active or live document as of this moment.

Below you'll find the parties involved in this case and it's interesting to see that the New York Times is amongst the plaintiffs against Apple. 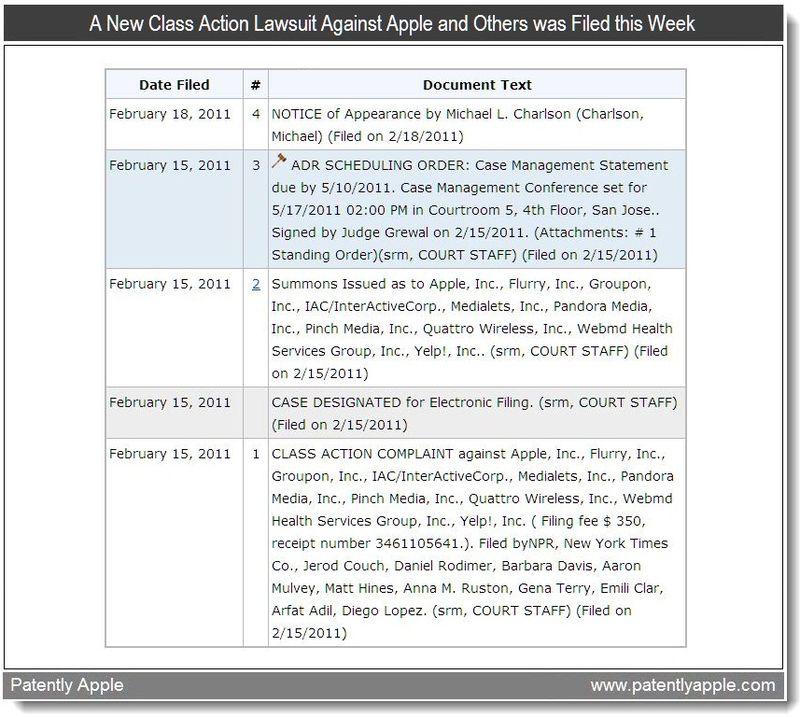 @Kyle. No, there's no relevance. The so-called "cut out" for the camera is in a dotted-line design in the patent graphic which means it's not there; it's not on the face of the camera. That would mean that the camera is on the backside which would be in the right position.

The cut out for the camera is in a different place. Relevance?