Microsoft's CES presentation segment on their next generation Surface 2.0 was definitely an eye opener. The technology that was once incased in a big bulky box has been dramatically slimmed down to a mere four inch table top. That's not too bad for their table version. A secondary version of Surface appears to be no different than a standard large screen HDTV.

One could easily imagine seeing Microsoft's table top version of Surface dropping to under the two inch mark by 2013 and rolling out to mass market segments like the hotel industry, restaurants, coffee shops and night clubs. Once you see the video segment below, you'll understand why this would play well in the night club scene.

Surface 2.0 now supports full HD on larger displays creating a compelling, immersive visual experience that draws people in. The breakthrough technology behind Surface 2.0 is called PixelSense; a technology that allows the display to act as a large camera that actually "sees" what's touching its surface. Their demo illustrates this very important point.

Technically, the answer is yes. Yet I doubt that Apple would be aiming for the same mass markets like restaurants, night clubs and bars that Microsoft may pursue.

Apple's future use of integrated sensing display technology would likely apply to their entire Mac line up, the iPod touch, iPhone and if we're lucky a future Apple-HDTV.

These types of Apple products would have a camera built right into the very fabric of the display itself rather than sporting a traditional iSight camera. The technology would allow for a more natural form of video conferencing without consumers having to look at a particular physical camera. It would allow for a natural face to face experience; a true FaceTime experience. In a way, Apple's technology, as presented in their patent, actually appears to be more advanced in that it could take pictures like a camera and doesn't require a subject to be touching the surface as PixelSense demands. More on this technology could found in our May 2009 report. 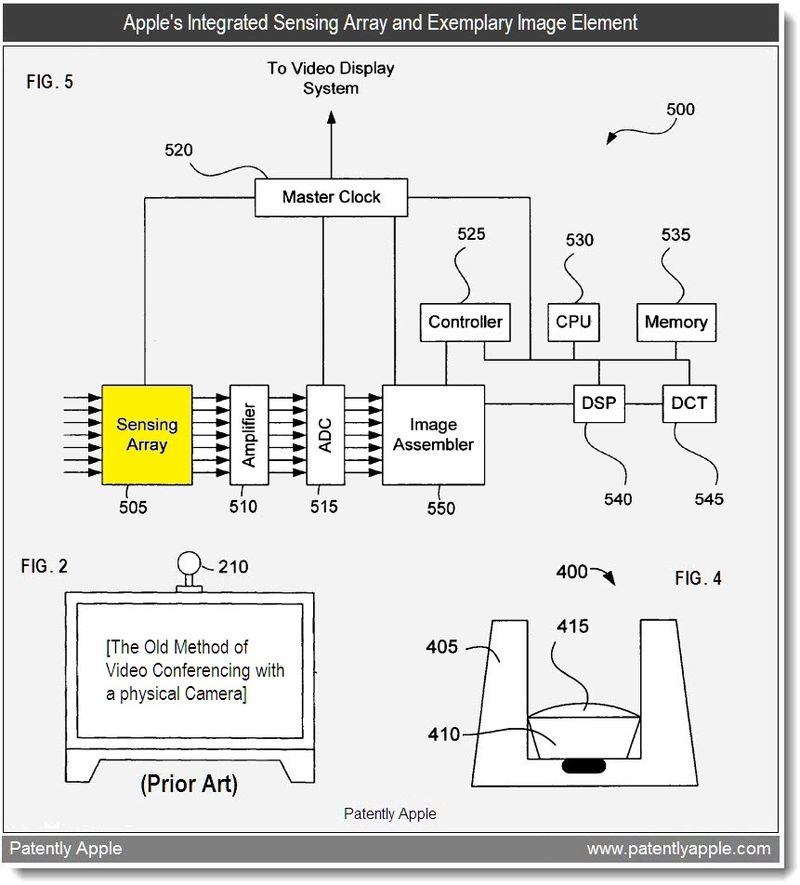 Apple's patent FIG. 4 noted above depicts a cut-away elevation view of an exemplary image element. Patent FIG. 5 is a schematic diagram of an exemplary system (500) that includes an array of image elements (505 sensing array). The prior art is simply to show you the "old way" of conducting a video conference in contrast with a system whereby the screen is the camera.

Apple's patent states that "The invention is suitable for use for capturing images. The images can pertain to still pictures or video. For example, the invention can be embodied as a digital camera in which a user can take a self-portrait by looking directly at a display which also provides image capture. The captured image is then what the user sees on the display."

It's unknown at this time if Apple's patent will remain a research project or become a viable product. But the patent has been granted to Apple, they have a new marketing brand in FaceTime to better reflect this new technology, Intel's new Sandy Bridge processors are touting extreme visuals and Apple is introducing a new operating system this summer. Is the time right for this technology to surface? Time will tell.

Apple's products are expensive because they aren't made of junky cheap plastic, and have innovative features..

"Microsoft has NO CLASS!!! Microsoft focus is on $$$, wherever and however it can get."

I think you got mixed up. Isn't that what Apple is doing now? Isn't that the reason why their Macs, iProducts are so expensive? They're more focused on the moolah.

Microsoft has NO CLASS!!! Microsoft focus is on $$$, wherever and however it can get. Apple focuses on class and end-user experience!!!

I hope apple comes out with something like this, it's kinda gimmicky, which is not apple's style (thankfully), but the coolness factor could more than make up for it, especially with apples interface expertise. when i replace my iphone 4 with my iphone 6 i want to be able to place it on my apple iTable so it can inductively charge, while the recent contents of my mobile day are splayed out on the surface adjacent to my phone and simultaneously backed up to my iHome apple server, also triggering my apple TV to put on my predetermined TV station with a Facebook ticker on the bottom.

Apple could also make this into a scanner, a kinect like controller. I hope it'll be in the next iMac which you could make into a surface or use normally with a keyboard. It should have Retina display.

How about a poker table that displays a green surface and...

Whoa. I'd like a gaming table in my home with this technology to play e-board games like monopoly on. As for FaceTime, it would be a grrreat improvement to just focus on the face in front of you to be more natural. Maybe it would even provide better lighting.