People generally have a well-developed ability to localize the position of a sound source based on the differences in the way the sound is heard by their two ears. In sound reproduction sound may be recorded in two or more channels of audio material and routed to multiple speakers to provide sound cues that allow the listener to localize the apparent position of the recorded sound in much the same way as the original source could be localized. It is necessary for the listener to be located correctly with respect to the speakers for the spatial position information in the sound reproduction to be perceptible to the listener and permit localization of sound sources in the sound as reproduced by the speakers. Similar considerations apply to synthesized audio material that may be routed to multiple speakers to provide an illusion of localized sound sources.

The Key is the Orientation Sensor

Apple's invention revolves around a device that provides an audio output which includes a speaker array mechanically fixed to the device as shown. The speaker array includes at least three speakers in a non-collinear arrangement.

Interestingly, the design below could also be confirming that Apple is still working on a revolutionary iPad Stand that would work with a magnetic backing. The concept was first introduced in our May 2010 report. This patent doesn't mention a desktop, and the speaker array designs match those of the iPad-like device. Hence, we're definitely looking at an iPad stand concept. 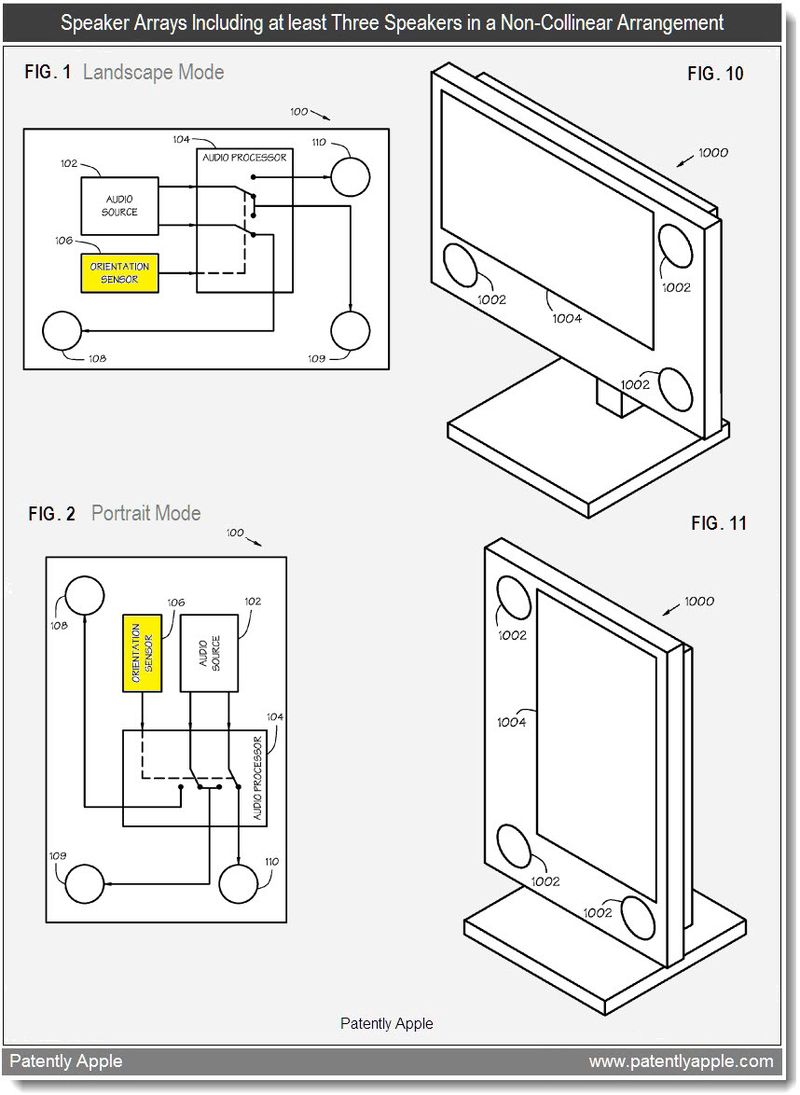 Apple's patent FIG. 1 is a simplified view of a device (100) to provide an audio output. The device includes a speaker array that is mechanically fixed to the device. In the exemplary device shown, the speaker array includes three speakers (108, 109 and 110) spaced apart in a non-collinear arrangement to produce the audio output. Each of the speakers may be substantially at the vertices of a polygon having a number of sides equal to the number of speakers in the speaker array. In other embodiments the speaker array may have more than three speakers in a variety of non-collinear arrangements. The term "speaker" may include a closely grouped cluster of speakers that work cooperatively to create an audible sound from an audio channel signal. 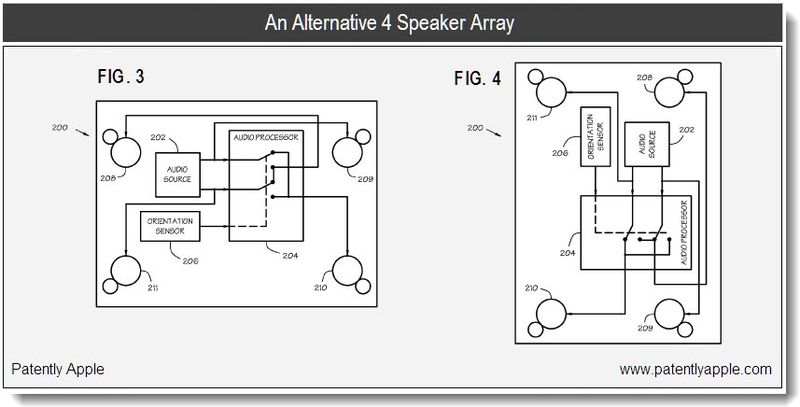 In Apple's FIG. 3 shown above we see an alternative speaker array that includes 4 speakers (208, 209, 210 and 211) located substantially at the vertices of a rectangle. As suggested by the two circles shown for each speaker, each speaker is a closely grouped cluster of speakers, such as a high range "tweeter" and a lower range speaker, that work cooperatively to create an audible sound from an audio channel signal. 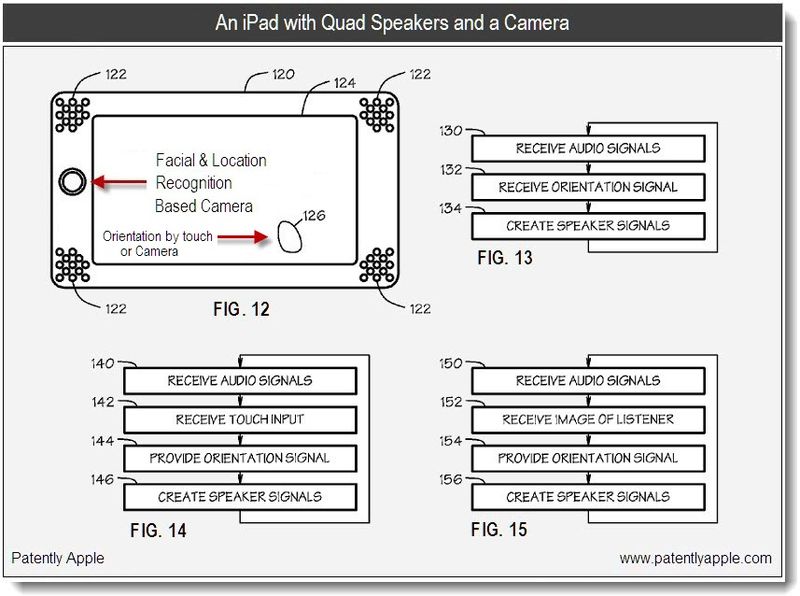 In September 2010 we presented a report titled "Official iPad Design Surfaces with only a Single Front Side Camera" which caused a stir in the community with many arguing that the "camera" was only a sensor. Today's patent makes it crystal clear that Apple intends to include such a camera.

Automatic Speech Recognition: Apple's Jerome Bellegarda is Apple's main engineer on all things regarding speech recognition. In a patent published today under patent 20110004475, Bellegarda takes us deep down the rabbit hole into his world of "automatic speech recognition" technnology. Today's patent focuses on this technology as it pertains to Apple's iPhone in business. The patent states that "in many applications such as automated dictation or computer data entry, it may be critical that the resulting message represent a verbatim transcription of a sequence of spoken words."

Scheduling Media Playback:  In September 2010 we posted a report titled "Apple Wants you to Get Down and P-a-r-t-y with Social iTunes." Today, another patent on this subject came to light with a twist. In patent 20110004330, Apple's iPod mechanical engineer Fletcher RothKopf and team introduces us to scheduling media playback. The patent covers all of Apple's devices including the iMac and Apple TV by inference. One of the applications described covers the ability to watch two videos at one time or record one while watching another. That's where the patent makes sense and would support another feature for Apple TV, should Apple advance this hobby of theirs. The feature noted above is hidden in all the noise about music and books. Though these applications are interesting, it's the application regarding video that appears to be the key gem. This fits nicely into this week's granted patent about an Advanced Apple TV.